Fake News lied about President Trump on Christmas day, saying he did not visit US troops in a combat zone during Christmastime, when in fact, he was in Iraq visiting the soldiers with the First Lady, Melania. After NBC and their copycat minions lied about this, a storm of criticism forced NBC to modify its article and admit its story was inaccurate.

Since most of their readers will not revisit an old article to see the modifications, the damage was done. Fake News use this simple method to brainwash their readers. In a nutshell, they publish a lie and alter it later when nobody is looking. Millions of poor addle-brained Lefties are left in the wake of the Fake News article, believing Lefty propaganda.

The next target of their spite and hatred was the beautiful Melania Trump. As Adam Shaw from Fox News wrote, under the headline, Media sneer at Melania Trump’s fashion choices, fawn over Michelle Obama’s:

Earlier this month, while promoting her new book “Becoming,” Mrs. Obama stepped out on stage in sparkly thigh-high boots from designer Balenciaga. Mainstream media outlets, who have frequently struggled to keep their composure when it comes to the Obamas, lost it.

“It wasn’t just an eye-catching ensemble. It was fashion. Fashion. Faaaashion!” , The Washington Post wrote.

Looking at the Washington Post article in question, we see that ‘Fashion critic’ Robin Givhan was the author. What kind of fashion critic is Robin Givhan? Her headline reads: Michelle Obama can wear whatever she wants now. What she wants is sparkly thigh-high boots.

As I watched Michelle Obama lumber onto the stage next to Sarah Jessica Parker, I was amazed at the difference in size between the two. SJP made MO look like a Bigfoot/Big-Bird cross. It appeared MO was wearing a giant yellow trash bag and had sprayed glitter on her elephantine legs.

Such is the Goebbels-like propaganda of the Left that the NPC audience went into loud turkey-gobble mode as MO stomped over to minuscule SJP. They must have had a dozen applause signs and audience warm-up guys. Zany Lefties clapped like a mass of starving North Koreans before Kim Jong-un. Without warm-up guys, handing out pails of stimulant-filled chocolates, imploring the audience to clap so hard they would bruise their hands, they would have sat there like mutes, wondering why Big Bird was on stage.

So embarrassed were MO’s minders, they refused cameras and cell phones into the place, so only one poor video was uploaded to YouTube – which isn’t worth watching. The professional footage was carefully edited and released in dribs and drabs – a two-second shot here, a five-second shot there. Most were kept off the screen.

What was the next step in the propaganda process? Release the talking heads and gossip column apparatchiks, like Robin Givhan, and sheesh, did she go to town on this.

As the 53-year-old fashion critic for The Washington Post gushed feverishly about her hero, MO, she refused to mention the woman’s thunder thighs, round head, goofy grin, clumsy demeanor, or angry eyebrows. She ignored how ugly the yellow trash bag looked, draped around the former first lady’s quarterback-sized shoulders,  or how her $4000 boots were designed for much slimmer, younger women. They reminded me of Disney’s hippos in tutus, though I doubt those cute Fantasia creatures ever had a searing hatred for white people. 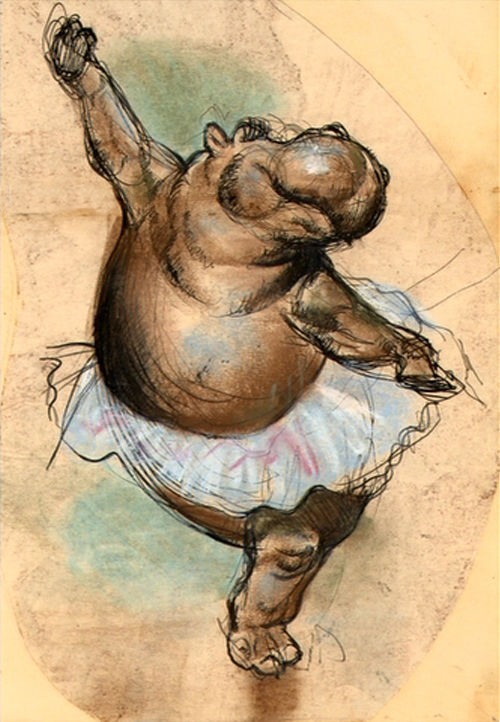 Michelle Obama’s thigh-high Balenciaga boots stole the show… [She] wore Balenciaga on Wednesday night. Boy, oh boy, did she ever. Not an understated, vintage Balenciaga sack dress. Not a molded blazer and sleek trousers from the current fall collection. No, the former first lady wore a full-length, draped, shimmery yellow shirt dress with a pair of gold, holographic thigh-high boots. It wasn’t just an eye-catching ensemble. It was fashion. Fashion. Faaaashion! … Heck, it would be quite something on a fashion professional.

As MO’s husband, BO, said once, “You can put lipstick on a pig, but it’s still a pig,” and Robin Givhan was smearing cans of that lipstick on the former first lady. Givhan went on to describe her as statuesque, aesthetic, ladylike, and get this – causing heart palpitations!

Givhan designated the trash bag and glitter boots as an ‘ensemble’ worth thousands of dollars. Will Obama at least donate the Yellow Peril to charity when done with it?

Why would a fashion critic prostitute her work in the name of politics?  There are other ways Givhan could have supported MO without tossing away all her standards. Or maybe these are her standards.

Looking for other articles by Robin Givhan, I found this one from 2013. We see three troll-like angry men, or perhaps women, with the required African American DNA to keep Lefties happy. They are chunky too, presumably so they can switch from models to bouncers should any real models show up. The idea was to thumb their noses at conventional beauty, and they succeeded in that, providing a troupe of stomping, angry gremlins. Robin Givhan gave it publicity, using words like impact, earthy, powerful, synchronized, curvaceous, defiant, moody, ladies in white, percussive, precision, bravado, beautiful, impressive, unique, pride, and formidable. I think one word would do; hideous. 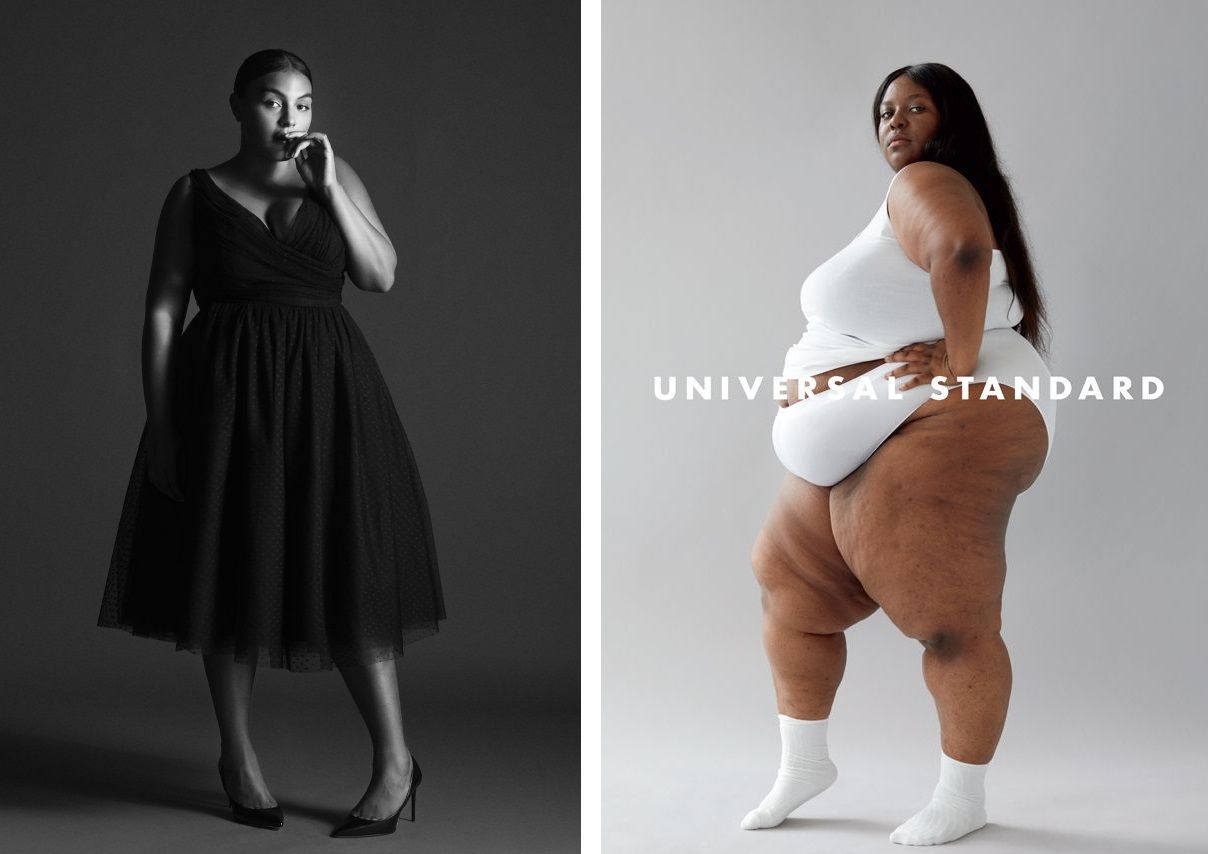 In this recent piece, Robin Givhan says of the fat black woman on the left:

Her skin is poreless and gleaming. Her hair is immaculately slicked back. She looks like a fantasy. And at a size 14, smaller than the average American woman, she arguably is.

Of the fatty on the right, she says:

…generous rolls of flesh exposed to harsh lighting and the camera’s glare. Her skin tone is unretouched and uneven. Her hair is a bit frizzed. She gazes defiantly out beyond the viewer. She looks palpably real.

The woman on the left has no poreless skin. Poreless is not even a word, but an advertising gimmick dreamt up by advertising beatniks. She is also not a fantasy to anyone but rather an average looking, overweight woman.

The corpulent woman on the right does not have generous, but monumental rolls of fat, as she is morbidly obese. She is not gazing defiantly, either. Her expression is hard to change because her cheeks are so big, and feeding your face all day is hardly ‘defiant.’ Skinny people who remain thin by resisting advertisers are defiant since they refuse to devour carbohydrates.

Robin Givhan goes on to say:

Together, the pictures exemplify a fashion industry debating how to speak to plus-size customers in a way that feels both inclusive and authentic.

The fashion industry wants to sell more clothes to fat women. It is mostly those outside the industry who say ‘plus-size.’ Inside the industry, they call overweight people blimps, beached whales, and all the other slang terms for fat.

The Universal Standard picture aims for a kind of raw honesty, and it upends everything the culture has taught us about beauty and desirability.

Robin Givhan’s dream is to replace tall, sexy blonde models with overweight, angry, black ones. What does she think of beautiful white women? Perhaps another of her articles will shed some light on this. 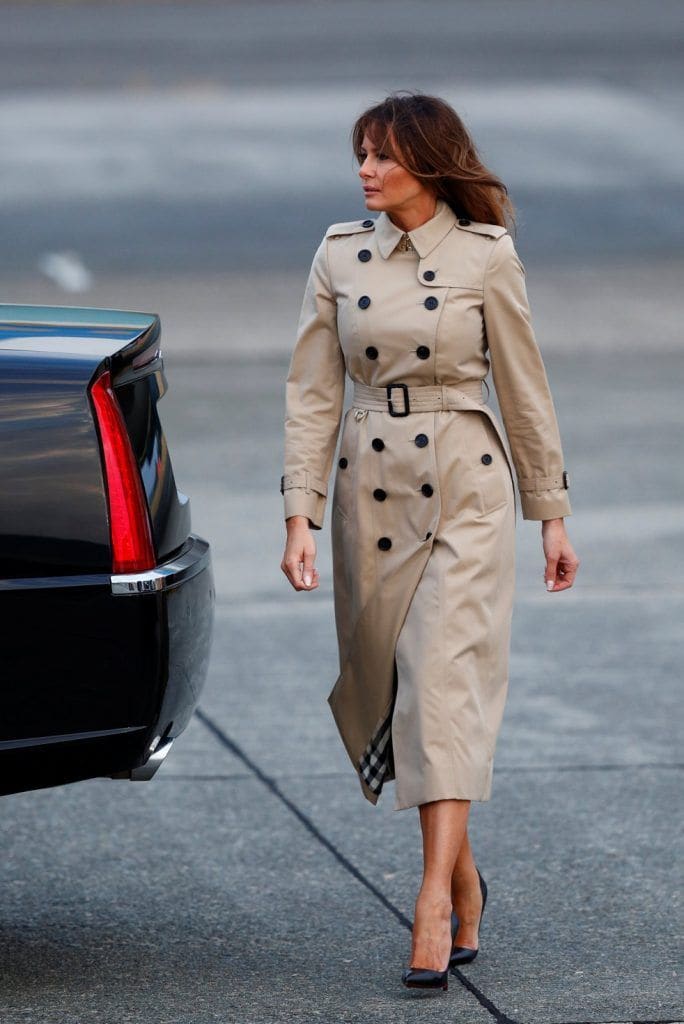 On that page, the First Lady, Melania Trump, is wearing beautiful and functional clothes, like a Burberry trench coat, a cocktail dress, and other kinds of dresses and jackets. She wears them because, aside from looking great, they are functional and appropriate for each occasion. For instance, the trench coat staved off the brisk cold wind on the tarmac after arriving in Brussels. One jacket she wore just for fun. It was emblazoned with the lighthearted words, “I Really Don’t Care. Do U?”

Getting Robin Givhan to pay the First Lady a compliment is like pulling teeth from a tiger. Givhan refuses to consider function or enjoyment as a reason for clothes, insisting that each item is worn for purely political reasons. She decides that Melania’s message is that she does not care. Why? Because that’s what her Zara jacket said!

So now our fashion critic is a psychiatrist too! It is extraordinary what a BA in English can qualify you to do. As a fashion genius, has she considered a hairpiece to cover the bald half of her head? How about the grand canyon creases in between her eyebrows? Perhaps a little surgery could fix that. And how about some therapy to cure her racist hatred of beautiful white women? That would help reduce the frown lines.