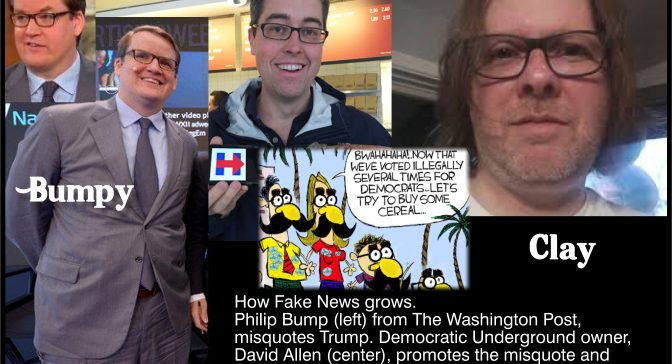 Once again The Washington Post is up to its old trick of misquoting President Donald Trump. Once again hundreds of Fake News sycophants copy them and reprint the misquote. This time it is about paying for a box of cereal!

You will see that once again it comes down to anti-Trump reporters misquoting, taking his words out of context, and not understanding the nuances of English as used by those in Donald Trump’s age group.

It all began with President Trump being interviewed by conservative The Daily Caller’s Saagar Enjeti and Benny Johnson for about half an hour. The full transcript is here. The following extract has the most relevant part in red.

The disgrace is that, voter ID. If you buy, you know, a box of cereal, if you do anything, you have a voter ID.

Well, over here, the only thing you don’t is if you’re a voter of the United States. A voter in the United States of America. I think it’s a disgrace what’s going on. Really a disgrace. And they try to shame everybody by calling them racist or calling them something, anything they can think of, when you say you want voter ID. But voter ID is a very important thing.

Have a gander at how The Washington Post’s Philip Bump mutated the quote, in his Nov 14 article. Here is his version of Trump’s words:

If you buy a box of cereal — you have a voter ID. They try to shame everybody by calling them racist, or calling them something, anything they can think of, when you say you want voter ID. But voter ID is a very important thing.

The first sentence is gone. In the second sentence, three commas and six words are deleted, including the important ‘if you do anything.’ Sentences three, four, five and six are deleted, and the seventh has one word deleted, and one comma added. The bits that are left are then cobbled together, with no ellipsis to show that editing took place. If the reporter, Philip Bump, had left instructions for this mischievous editing, it would look something like this: 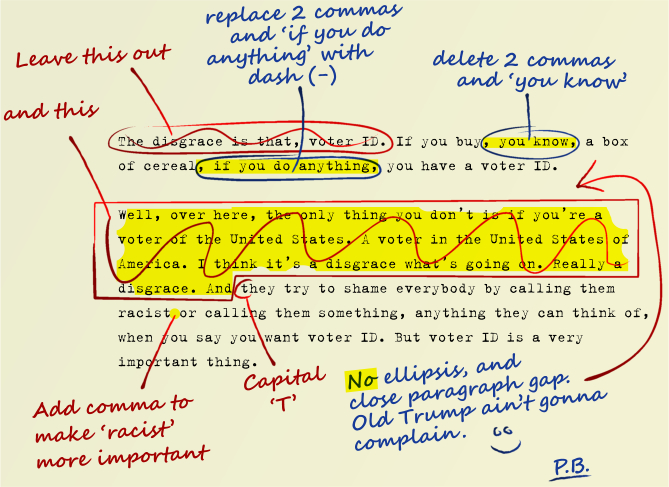 As for Trump’s meaning; it could not be clearer. Once again he said, “If you buy, you know, a box of cereal, if you do anything, you have a voter ID.”

And it is true. Go to any supermarket or grocery store. Most shoppers use their cards or phones to pay. As Wikipedia explains, “Contactless payment systems are credit cards and debit cards, key fobs, smart cards, or other devices, including smartphones and other mobile devices, that use radio-frequency identification or near field communication for making secure payments.”

Even before payWave and other contactless payment systems customers would find themselves in lines waiting while most of those in front of them paid using cards, and had to input their passwords. Cash was becoming rarer every day. In the aisle next to those paying by card was a self-service check-out with no cashiers, and again, most customers used cards or phones. Growing millions buy their groceries online, for which they need the card and ID.

Three and a half years ago Amazon processed a patent that laid out the company’s vision for a new type of retail store with no lines or cashiers.  From Recode:

“Called Amazon Go, the store will allow Amazon customers to shop for grocery staples, prepared meals and sandwiches, and then walk right out without stopping to pay at a cashier or kiosk. Customers need only to scan their phone using the new Amazon Go app on the way into the store, and their Amazon account will be charged for items taken.”

Of course to start the account with Amazon the customer will need their credit or debit card, or other ID. Society is fast moving away from cash.

That is what Trump was referring to – the fact that MOST Americans use their cards or phones to buy cereal, yet, the Left balk at the idea that they should use the same ID technology for voting.

Saying, “If you buy, you know, a box of cereal, if you do anything, you have a voter ID,” does not translate to, “You MUST have ID to buy a box of cereal,” no matter how much The Washington Post wishes it does. A quick online search of the term shows many other media outlets using the same goofy lie. Here is Democratic Underground’s front page today: 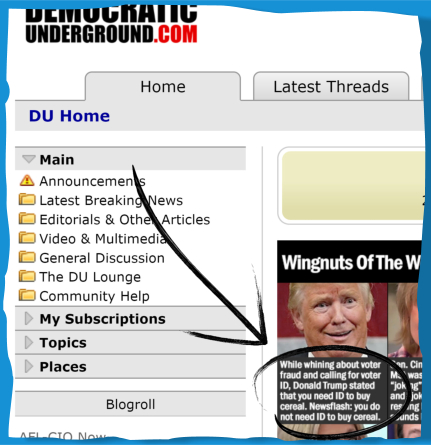 Newsflash Democratic Underground: Trump did not state that “you need ID to buy cereal.” Read the transcript and see if you can find those words.

They even placed a cartoon by Clay Jones on the front page, showing a white family coming out of a voting booth, saying, “…let’s try to buy some cereal…”

The gag does not work because they are not Latin American illegal immigrants and Trump did not say they could not buy cereal.

The mistakes made by The Washington Post’s Philip Bump, DU owner and co-founder, David Allen, and cartoonist Clay Jones are numerous.

1)  When Trump says “you” he doesn’t mean every man, woman, and child in the world.

2) He was talking about Americans.

3) He was talking to the conservative Daily Caller interviewers and their readers.

4) He was talking about buyers of cereal.

5) 90 to 95% of college-educated conservative adult cereal-buying Americans buy their cereal from supermarkets with either a card or a phone.

6) Trump was talking to them when he said, “If you buy, you know, a box of cereal, if you do anything, you have a voter ID.”

Lefties Philip Bump, David Allen, and Clay Jones apparently do not understand that the word “you” does not mean everyone. They decided it did. So if Trump said to his children, “You will love my new haircut,” Bump, Allen and Clay would say, “The Donald said everyone in the world will love his new haircut!”
If Trump said to his wife, “I would love it if you scratched my back,” Bump, Allen and Clay would say, “That lunatic Trump wants all people in the world to scratch his back!”

Many Lefties have trouble understanding the English language, and this is probably because English teachers have not been teaching English much for the last four to five decades. They mostly teach left-winged political propaganda.

Bumpy Underground Clay is what we end up with. 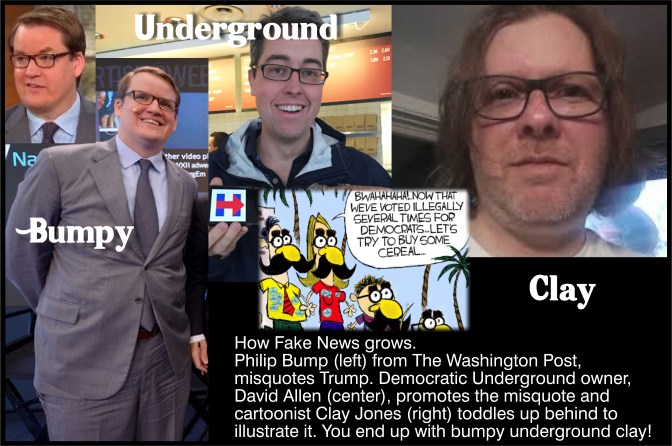