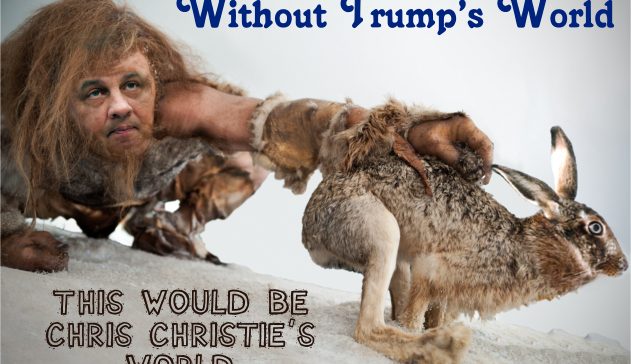 Democrats worked hard all through 2018 to besmirch President Trump, and they continue breathlessly to the very end. Each day brings another flurry of accusations and poutrage. Eight days ago, Donald Trump tweeted that even President Reagan had tried for years to build a border wall or fence, and could not do so. Ronald Reagan did want a fence. The tweet started jam-packed scoffing from Lying Lefties, who were falling over themselves to deny it. Reporters did their best to cover up Reagan’s wish for a fence and called Trump a liar.

Reagan was a private man who kept many ideas to himself, sharing them only with close friends or allies. Even his wife Nancy said, “There’s a wall around him. He lets me come closer than anyone else, but there are times even I feel that barrier.”

In Reagan’s day, White House workers were less likely to leak since they were raised with discipline. Today’s White House staff leaks like dime-store baskets. If they have nothing to spill their guts about, they bake up lies to sell to the nearest fake reporter.

Even President Ronald Reagan tried for 8 years to build a Border Wall, or Fence, and was unable to do so. Others also have tried. We will get it done, one way or the other!

That surprised me so I – I called up Lou Cannon, the great Reagan biographer and said, “Did you ever hear the President Reagan ever push for a wall? He said, “No,” and then this quote surfaced from Reagan in 1980.

Notice Karl only provided one word from 85-year-old Lou Cannon. “No.” What else did Lou say? Can we trust Karl’s one-word summary? I bet Lou said more than just no. Here is what I imagine he said:

No, he didn’t push for a wall, but the Berlin wall was a big issue then. Reagan knew it would look contradictory if he told  Mikhail Gorbachev to tear down the Berlin Wall while pushing for the building of a Mexican border wall. That’s why he used the word ‘fence’ instead of ‘wall.’ He discussed building a fence between the States and Mexico, in private mostly, but he did not want to lose Mexican/American votes either, so it wasn’t something he shouted from the hilltops. It was primarily kept quiet.

If Lou pointed those things out and Karl only quoted his first word, it would be a dishonest summary. Karl then played vision of Reagan saying, in 1980:

Rather than making them, or talking about putting up a fence, why don’t we work out some recognition of our mutual problems, make it possible for them to come here legally with a work permit, and then while they’re working, and earning here, they pay taxes here.

Like all the Fake News that day, Jonathan Karl ignored the fact that this was a misquote Reagan made while reading his own speech.

The excerpt was from an election debate between George H. W. Bush and Reagan, held at the League of Women Voters 1980 Presidential Forum. See the correct transcript here [*Note – that page was mischievously deleted after I wrote this piece, but can still be seen on Archive.org, here]. A teenager asked each of the candidates the following question:

My name is David Grossberg, and I would like to know:  Do you think the children of illegal aliens should be allowed to attend Texas public schools free, or do you think that their parents should pay for their education?

George H. W. Bush answered first, saying he would like to see some illegal work by illegal workers made legal, and praised Mexicans, saying part of his family was Mexican. He was trying to appeal to women and Mexican/American voters.

Now, look at Reagan’s answer, which he read from a prepared speech. I have highlighted the part that Reagan misread:

I think the time has come that the United States and our neighbors, particularly our neighbor to the South, should have a better understanding and a better relationship than we have ever had. And I think that we haven’t been sensitive enough to our size and our power. They have a problem with 40 to 50 percent unemployment. Now, this cannot continue without the possibility arising with regard to that other country that we talked about, of Cuba and what it is stirring up, of the possibility of trouble below the border, and we could have a very hostile and strange neighbor on our border. Rather than making them—we are talking about putting up a fence. Why don’t we work out some recognition of our mutual problems, make it possible for them to come here legally with work permit, and then, while they’re working and earning here, they pay taxes here. And when they want to go back, they can go back. And they can cross, and open the border both ways by understanding their problems. This is the only safety valve right now they have with that unemployment that probably keeps the lid from blowing off down there. And I think we could have a fine relationship, and it would solve the problem you mentioned, also.

As per the transcript, Reagan had meant to say that they were talking about building a fence and that it would be used to regulate the flow of migrants in conjunction with permits, etc.

In a 1999 book by Dinesh D’Souza, Ronald Reagan: How an Ordinary Man Became an Extraordinary Leader, we see this on page 188: 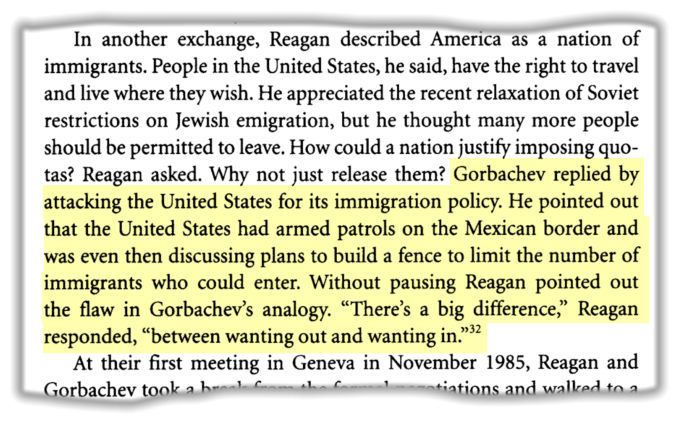 Reagan was defending plans to build a fence to limit the number of immigrants entering the United States.

This quote is from the book ‘Reagan: A Life In Letters,’ by Kiron K. Skinner, Annelise Anderson, Ronald Reagan, and Martin Anderson, 2004.

He was hinting about illegal aliens invading America. Donald Trump remembers that Reagan wanted to build a fence and was unable to because Reagan did want to make a wall but was unable to. The liberal press did not want the public to know ‘the Gipper’ wanted a fence, so they ignored it. Trump, on the other hand, met Reagan and many of his friends and associates. Trump has a memory. He does not need Google to ‘remember’ this, unlike all the goofy fake reporters out there.

Getting back to Jonathan Karl’s This Week program, after playing Reagan’s misquote, Karl said, “What happened to that Republican Party?” Rich Lowry, the National Review editor, replied:

Lowry was almost right, but the GOP was responsible for this, not Reagan. Many Republicans were soft on immigration, including Bush senior. They prevented Reagan from building his ‘fence.’ In the end, he had to go along with the Party itself and voice their sentiments and decisions. Being old-fashioned, he did not mention it outside of a small circle of friends, and none of it was leaked. Trump suffers the same problem; limp-wristed Republicans and RINOs.

Lowry insisted Trump was wrong to take credit for the government shutdown, saying he ‘blew through’ the ‘first rule of shutdown.’ Applying those kinds of rules to Trump shows Lowry has a lot to learn about this President. He took credit for the shutdown because he knows nobody needs government bureaucracies. Keep it closed for long enough, and maybe the government will realize just how unnecessary most of it is.

Donna Brazile and Elisabeth Bumiller are NPCs, so all I heard when they began moving their mandibles was a robotic chant. 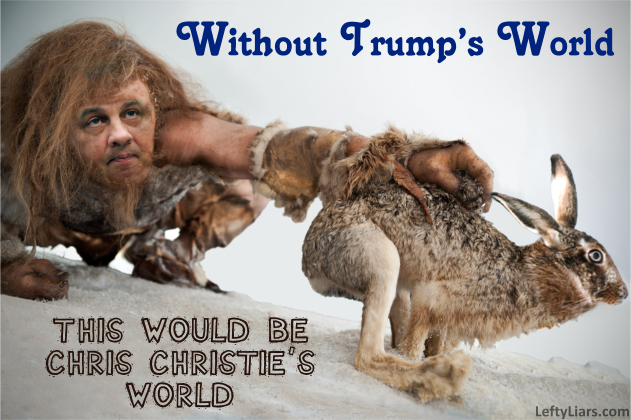 At the six-minute mark, Chris Christie displayed an alarming lack of business insight by claiming that only in politics do people wait in the weeds to pounce on you. The real estate world is full of predators waiting in the undergrowth, and they are far better hunters than politicians. Trump knows far more about this than the average politician. Christie lecturing Trump about swamp critters is like PBS lecturing Fox News about biased reporting. He describes Washington politics as “this world” and high business as Trump’s world, but out of the two, only one of those worlds exist, and that’s Trump’s business world. Without that world, there would be no creepy politicians, or maybe Christie forgot about his bank account, suit, car, house, furniture, security, roads, bridges, jets, electricity, lights, computers, internet, supermarkets, heaters, air conditioners, clean water, guns, fences, farming, and the ten million other things politicians depend on to exist, which all come from Laissez-faire capitalism. Take Trump’s big business world away, and Christie would be a skinny caveman chasing hares.

He got it right a short time later when he said that when the stock market was up, the media refused to give Trump credit, and when it fell, they blamed him straight away. Christie is sometimes right and sometimes wrong. I suppose he thinks he has to humor the liberals at ABC, but that is one thing Trump would never do.

Our concerns about his temperament and his shambolic style have largely proved out, and unfortunately this week has been a prime example of it.

That statement pleased Elisabeth Bumiller. ‘Shambolic’ is an English word meaning ‘disorderly or chaotic,’ and there is nothing disorderly or chaotic about Trump. If there is, Lowry should point to an example. No doubt, it will not be chaos so much as some issue over which Lowry disagrees. Perhaps he thinks he would make a great president. I see no evidence of that. Maybe he could try managing a menswear store instead. The last thing we need is another pretender who does whatever his brown-nosing pals want him to do.

Later Christie points out that, as a 72-year-old, Trump will be set in his ways, just like most people’s 72-year-old grandfather. It is not so much about being stubborn as it is about respect. As I said regarding Trump’s continuing to play golf, people would never treat their 72-year-old fathers or grandfathers how they treat their President.

Presidents from George Washington to Lyndon B. Johnson were protected from their minor failings by the press’s good manners. Hippies ended that with their spiteful and vicious hatred of Nixon and the establishment, throwing courtesy and fair-play out the window. After that, any minor human foibles would be laser-focused on by the liberal press. They protected their heroes Carter, Clinton, and Obama, but went to town on Reagan, the Bush’s and now Trump. Reporters not only skin Trump alive for making innocent errors but will rehash their vile derisions every opportunity they get, for years, like recurring yeast infections.

The public did not read the details of hundreds of Carter’s mistakes and missed out on most of Clinton’s and Obama’s because the press applied those rules of old to them. They made far more mistakes than Trump, and many were dangerous mistakes, costing Americans dearly.

Fake News has worked hard this year and last, creating Nothingburgers about President Trump. None of them stand up to scrutiny, though, and all contribute to the liberal media’s gradual death. Without society’s trust, they cannot survive, and who in blazes trusts those guys anymore?