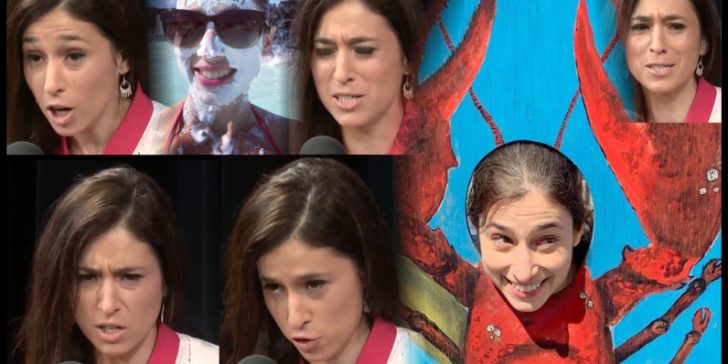 The media is still out of control and fuming over the election results from 2016. When Attorney General William Barr made it clear he would pursue all those responsible for the Russian Nothingburger, Fake News was stirred up like a hornets’ nest. Like a scurvy mob of pretend-pirates, it was all hands on deck as they dusted off their cannons for a mighty show of Fake Force. They even managed to get Robert Mueller up to make some noise, which will become a Muellerburger.

The press is off its meds and foaming at the mouth. Take Catherine Rampell, from The Washington Post, who wrote this article on Monday. Under the heading, “Trump’s narrative is nonsense. So why is the media buying it?” She delivered what can only be described as a childish diatribe:

Rampell:  that Democrats are unable to focus on a substantive policy agenda because they’re too fixated on investigating, subpoenaing and, eventually, impeaching the president.

Considering the Democrats have not done anything except investigate and subpoena, intending to impeach, it is a perfectly sensible and factual narrative.

Rampell:  Or, as our victim in chief…

Oh dear, the opinion columnist sounds more like a poster at Democratic Underground. Ad hominem is fine, but please, always spice it with some facts.

Rampell:  … tweeted on Monday: “The Dems are getting NOTHING done in Congress! They only want a Do-Over on Mueller!” This sort of nonsense is something we’ve come to expect from Trump.

What is missing from Catherine’s claim is information about something they are getting done, other than a do-over on Mueller. Instead, she waffles on as follows:

Rampell:  But more troubling, perhaps, is that many of us in the media have also been amplifying his false narrative.

Wrong, Catherine. The media creates Fake News about Trump at the bidding of their masters, the Democrats. The only way they amplify Trump is by lying about him.

Rampell:  … the number of Democratic officials calling for impeachment has grown in recent weeks.

Make up your mind, Catherine. First, you told us that the idea Democrats wanted a do-over of Mueller was ‘nonsense,’ and now you confirm Trump’s prognosis.

Rampell:  Maybe they’re jumping on the impeachment train because they believe it’s the right thing to do, or because they think it’ll be politically advantageous.

Maybe socialists are obsessed with impeachment for the same reason socialist tin-hat dictators like to overthrow democratically elected leaders. It is an easy way to gain power without the trouble and expense of elections – especially when you know you would lose those elections. It is the way of thieves and thugs – the law of the jungle.

Rampell:  But another plausible explanation for why so many Democrats are now talking about impeachment is that’s what we in the media, primed by Trump, ask them to talk about

It sounds like you are confused, Catherine. First, you said that Trump’s tweet, about Democrats wanting a do-over on Mueller, was nonsense, though you neglected to mention why. Then you told us how much Democrats want to impeach Trump, which contradicted your first statement. Now you say Democrats are fixated with impeachment because President Trump primes them to be!

‘Prime’ means ‘To instruct beforehand: COACH. Primed the witness.’ Catherine thinks Trump coaches Fake News to encourage Democrats to impeach him! In reality, Democrats run Fake News, not the other way around.

Rampell:  — often to the exclusion of other substantive issues that those Democrats are working on and that voters care about.

Once again, Catherine Rampell failed to provide an example. WHAT are these other substantive issues? I know of only one activity they pursue, and that is to impeach Trump somehow.

When Catherine wrote ‘primed by Trump,’ she may not have locked on to the exact nature of Trump’s method, but she was looking in roughly the right direction. The Donald plays psychological games with socialists, and I have written about it before. Regardless, he would not like to be tangled up with delaying tactics, including the ‘impeachment nothingburger.’

Rampell may have a sense of this, but she has confused her President’s Br’er Rabbit tactics with something less extraordinary, which happens when you underestimate your enemy. If she wishes to know her President, she first needs to realize how smart he is. When she learns enough, she will figure out that he is her best friend, not an enemy at all.

Rampell: In one particularly frustrating exchange, NBC’s “Meet the Press” host Chuck Todd asked Rep. Rashida Tlaib (D-Mich.) to address criticisms that the Democratic Party is too myopically focused on subpoenas and impeachment rather than “kitchen table” issues.

I saw the six-minute interview here and think Catherine is frustrated for two reasons; firstly, the criticisms came from  David Betras, the former chairman of the Mahoning County Democratic Party. He has long complained that his fellow Democrats need to stop attacking Trump and start being involved in real issues that matter to Americans, like jobs, taxes, and policies. Secondly, she hated that Chuck Todd appeared to agree with Betras. Other Democrats are waking up to this too.

Rampell:  He did this, of course, while only asking myopic questions about subpoenas and impeachment, and none about any of those “kitchen table” issues.

No, he began with a common enough question to loosen Rashida up for the main query, about David Betras. Rashida started her career as a congresswoman by shouting, “We’re going to impeach this motherf***er,” which revealed her volatility. Had Todd jumped straight in with the question about Betras, Rashida may have lashed out at him. He thought it would be safer to ease the subject in after a rehearsed talking point.

Rampell:  I support Congress’s efforts to exercise oversight over the executive branch, including through subpoenas of Trump’s financial records.

Congress may only exercise such oversight responsibly, and not in a guerrilla-like fashion used by third-world tin-hat tyrants. Abuse of congressional powers is unconstitutional and illegal. The current mob of misfits abusing congressional power in this way will pay for their crimes either by doing jail time or by being rejected by the electorate – I would hope, both. The President’s financial records are his business, not yours, and he is legally entitled to privacy.

Rampell:  Given Trump’s historic lack of transparency, his sprawling business empire and his many fishy transactions over the years,

When I ask Lefties to provide examples of such things, they never can. They manage to make noises and use scary adverbs, but that is about all. The New York Times tried to make Trump look like a criminal last year, and I unmasked their techniques. Trump has always been an honest businessman, and if he were not, you may rest assured Mueller would have brought him to task for it. Rampell swallowed all the Fake News on this subject and is now regurgitating it, without any examples.

Rampell:  lawmakers need to make sure that he is running the executive branch in the interest of the American public rather than his own pocketbook.

President Trump is not legally required to provide his private tax information, and you have no right to demand it, despite your malicious insinuations. Try to remember the legal principle that one is considered innocent unless proven guilty. It is known as the ‘Presumption of Innocence.’ The burden of proof is on the one who declares, not on one who denies. Once you and your fellow apparatchiks dig up some evidence that your President has committed a crime, you may use congressional powers to demand his tax papers. Until then, quit your pathetic whining.

Rampell:  But, in fairness, there have been a lot of other issues — kitchen table issues, you might even say — that Democrats have also been pursuing, and to which pundits like me haven’t given sufficient time or attention.

Isn’t that cute? Little Catherine Rampell of the Washington Post is standing in front of her beloved Democrats, shielding them by taking the blame.  It was Fake News’ fault! “We have been so busy attacking Trump we haven’t had time to report all the other things Democrats are up to,” she appears to be saying. The trouble is, Catherine, we can see what the Democrats are doing without your help. They tell us themselves in tweets, TV ads, and various rallies and speeches, which are all visible online. They show us they spend every day pursuing Trump and will do or say anything to impeach him somehow, such is their desperation.

Rampell:  [snip many paragraphs of Democrat propaganda and promotion]

Catherine, have you no shame? Fake News works for the DNC. They are one and the same, which is why rules need to be adjusted to make you guys conform to electoral laws. You need to clearly label each of your articles with the words: “This is a paid political message from the Democratic National Congress.”

Rampell:  If anyone is too laser-focused on the threat of impeachment, it ain’t the Democrats. It’s the object of that potential impeachment, aided and abetted by a media he manages so masterfully.

I am surprised your editor did not tell you to remove the word ‘masterfully’ since usually Fake News will refuse any compliment to Trump, even negative ones. They must be softening. As for your comment, why would the target of such a massive attack not be laser-focused on it? Aside from everything else, it would provide you another reason to criticize him.

So who is this knucklehead Catherine Rampell anyway? 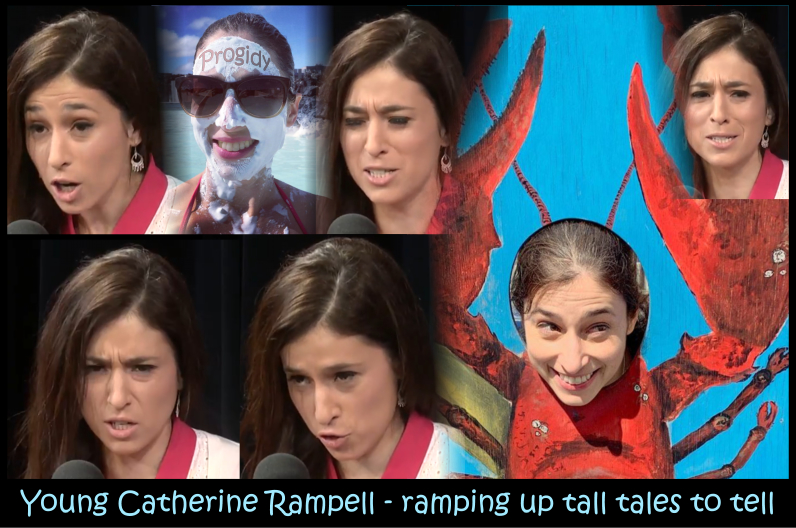 Cath is thirty-four and from Southern Florida. She earned her brainwashing award (B.A.) with the highest accolades liberals could muster and went to work for Fake News lickety-split. All the usual suspects publish her left-winged clichés; The Washington Post, CNN, New York Times, CBS, CNBC, PBS, MSNBC, and NPR National Public Radio. She is one of the thousands of young journalists who replaced journalism with anti-Trump gossip and old wives’ tales.