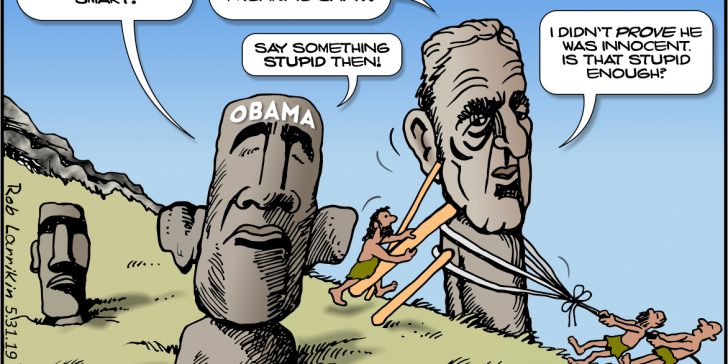 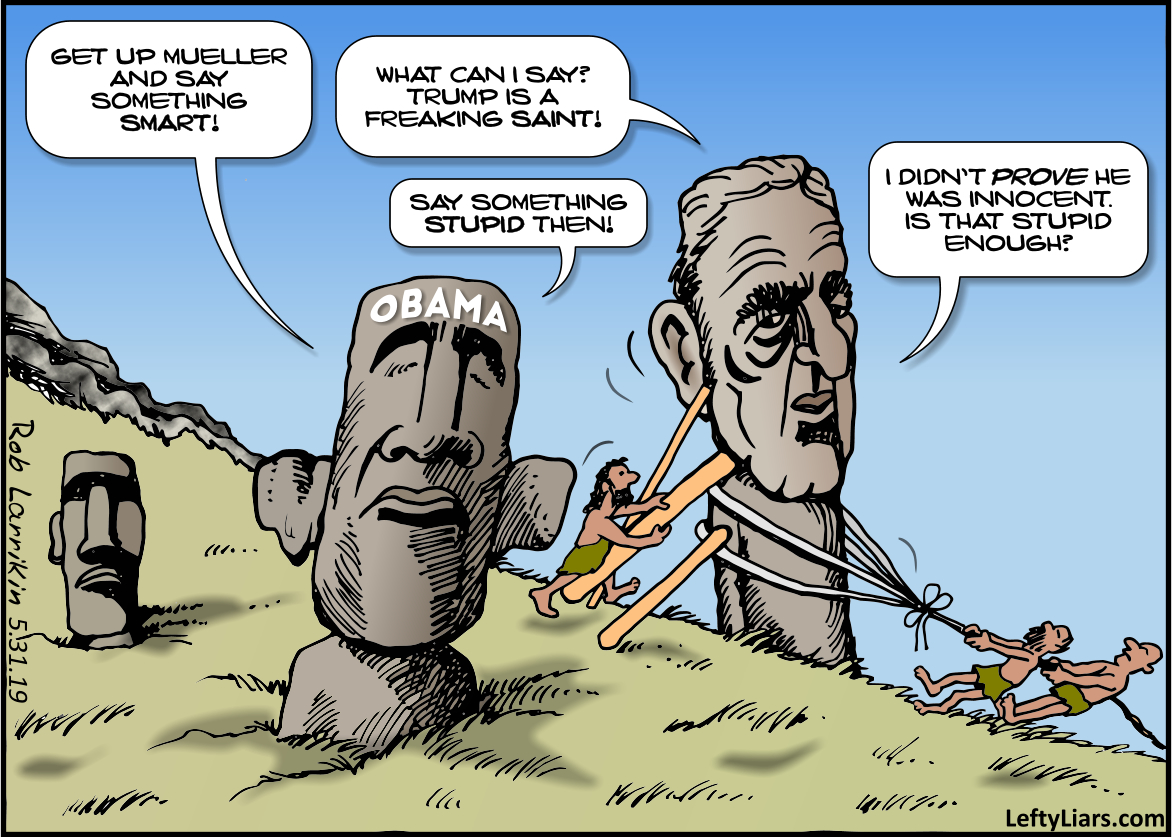 President Donald Trump described Robert Mueller as a totally conflicted ‘Never Trumper’ who was angry after being refused a job as FBI Director. That would be a prime motive for Mueller to seek revenge and after being appointed ‘Special Prosecutor’ by Deputy Attorney General Rod Rosenstein, he began an oft-described unwarranted witch-hunt to hurt the President. Like a schoolyard bully, he roughly rounded up some of Trump’s helpers and threatened them with jail unless they co-operated, throwing some in jail over matters irrelevant to Trump.

Over almost two years, Mueller turned over every stone and was given access to everything by Trump. Even so, he found nothing. No dirt. No corruption. Nada.

Democrats had pinned their hopes on Mueller to give them the ammunition they needed to impeach President Trump. As socialists, they hate wealthy, successful businessmen with a passion, though they make exceptions with Leftist billionaire donors like George Soros and Jeff Bezos, who support their cause. In their mind, any conservative capitalist billionaire must be evil with a great history of theft and corruption. They cannot imagine otherwise. Their parents raised them from the cradle to believe this old myth; that wealthy people cheat, steal, and wring money illegally out of the poor.

Being wealthy and conservative, Trump’s guilt was crystal clear to Lefties. He was no doubt sitting on a mountain of evil secrets just waiting to be exposed. All of them, from Hillary Clinton to Alexandria Ocasio-Cortez had little doubt these would be found by their determined bloodhound, Robert Mueller.

When Mueller came up with nothing none of the liberals considered for a moment that Trump might be innocent. That would be asking way too much of them. Instead, they reckoned it had to be one of several possibilities:

1)  Somehow Trump had hidden his dirty secrets so well that even Mueller could not find them.

2)  Trump had got to Mueller, either with bribes or with scare tactics to make him stop.

3)  Mueller was too scared to take what he found to court, for fear of losing.

4)  Mueller had not been the expert hunter they assumed he was.

Democrats were sure it was not the fifth possibility; that Trump was an honest businessman. Such a notion was absurd to them. Most would not consider it for a second. “No way,” they decided. “He lies all day long,” they assured themselves. “How can he be an honest businessman if he lies all day long and cheats on his taxes? And we all know Trumpy cheats on his taxes because he refuses to release them.”

The answer to their dilemma is easy. First, Fake News lied to them about President Trump lying, all day every day. In reality, he does not lie, and I have tested this. On four different discussion boards, I invited hundreds of posters to provide one example of a Trump lie, and they failed miserably. Many lazily provided links to lists of alleged lies (Gish Gallops), but none could provide a proven lie. When they tried, the “lie” was dismantled and shown to be false. It was often a misunderstanding, a pun, or a gag rather than deception. Other times it was mischievous misinformation, deliberate editing, misreading, misquoting, and so on.

Fake News editors knew Donald Trump was honest and incorruptible and decided to create a big lie about the man. They spun the line that he lies every day and sold that pitch daily, en masse. Many Lefties believed the falsehood and assumed his business must be full of dishonesty too. Mueller would have to succeed in uncovering grand corruption, they reasoned. After all, if you fib to taxation departments or governments when you are in business, you break the law. How could Trump, a pathological liar, not have been deceitful to the government and thus violated the rules?

I guess Robert Mueller probably believed Fake News too, along with many other Never Trumpers. George Bush, John McCain, Rod Rosenstein, they all assumed that an examination of Trump would have to yield many examples of his lies and cheating. That, in turn, would guarantee his impeachment. Trump’s goose was cooked, they deemed.

Those chumps made a foolish assumption; that Fake News had been telling the truth. They would all be horrified to see Mueller coming up with NOTHING because Donald Trump is honest. Not a liar. Not a thief. Not corrupt.

It was horrifying and unthinkable. It must be Mueller’s fault. Their rage was swirling around like angry vultures looking for a place to land when Attorney General William Barr gave his summary of Mueller’s report. The vultures decided to land on Barr and began tearing into the man, taking out their blind rage in a festival of brainlessness.

Watching CNN, poor Jim Carrey went crazy all over again, giving psychiatrists around the country reasons to gamble on his likely breakdown. The poor crazed lunatic hates both Mueller and Barr now, with a passion. His old partner from the Dumb and Dumber movie, Jeff Daniels, reappeared to show us that he is indeed, even dumberer than Carrey. They are both examples of die-hard liberals who will never grow out of their delusions.

Mueller himself must have felt frustrated watching Democrats vent steam over his silence, but his job as a special prosecutor was to gather evidence of any wrongdoing and provide it to the attorney general for his deliberation. He could not indict Trump for two reasons; one, there was nothing to indict Trump on, and two, even if there was, it was not his job or position to do so.

However, Mueller knew that if Democratic Congress Critters wanted to make life hell for Donald Trump, they could always try to impeach him regardless of evidence. Perhaps he felt that Trump succeeded in hiding evidence and was actually guilty. Maybe he thought that at least this way the ‘criminal’ would get some justice, even though it was immoral and plain wrong.

Perhaps with the encouragement of Never Trumpers, and possibly even Hillary and Obama, Mueller dragged his aging body back to the podium to hint to Democrats that it would be okay by him if they attempted to impeach Trump for the hell of it.

He told them that he had not proven President Trump’s innocence, which was the logic of a lynch mob. They justify hanging a man without a trial by saying, “We found no gosh-darned evidence that he done-doodily-did it, but then agin, hyuk, we done found no evidence that he ding-dong-diddily didn’t do it, neither. Let’s hang ‘im.”

Throwing away the sacred premise of our law courts, that all men are innocent until proven guilty, Robert Mueller destroyed his historical standing during that speech. He will now be remembered as a treasonous saboteur who used his power to encourage a hopeless impeachment that will waste many more millions of taxpayer dollars.

In my opinion, such wanton disregard for the spirit of the rule of law should be frowned upon, but when government officials connected with justice and law do it, we should jail them.

I think Robert Mueller would look great in stripes.