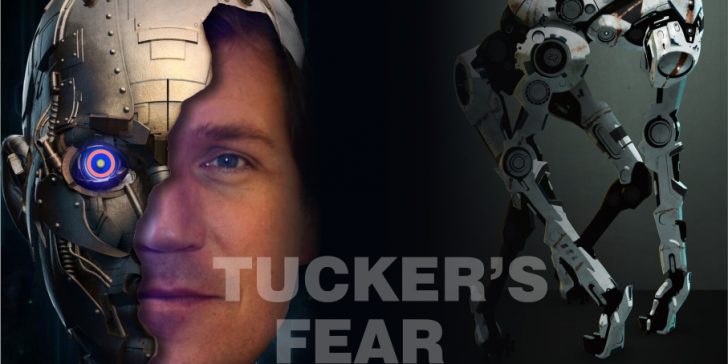 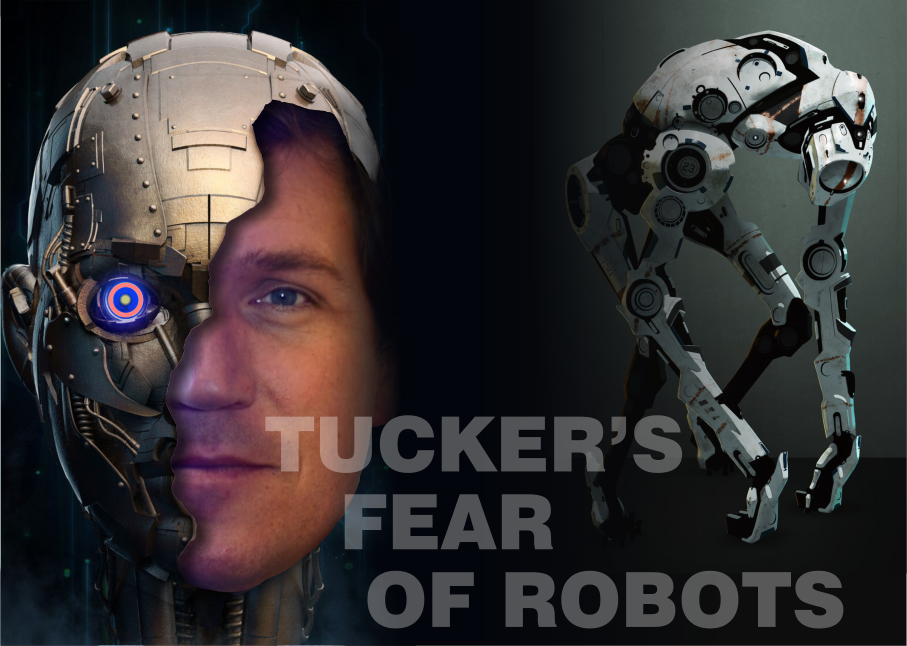 Tucker Carlson does a great job fighting the Left, but he does have an Achilles’ heel. According to Wikipedia, he preferred Theodore Roosevelt’s interfering, Statist, big taxing approach, rather than laissez-faire capitalism. Apparently, Carlson believes Roosevelt’s interventionist policies may have prevented a communist revolution. In fact, World War I and Herbert Hoover neutralized such a revolution, but Tucker’s teachers taught him to misdiagnose WWI and hate Hoover. Roosevelt’s interference in business and economic matters made it far easier for the Left to gain power in the United States.

An example of how Connecticut’s Liberal arts college Trinity affected Carlson is his anti-technology view concerning robots. A popular myth the Left promote is that robots ‘destroy jobs,’ and this view is advertised actively by Democrat Andrew Yang.

On Friday Tucker gave Yang a chance to promote his anti-robot philosophy. Instead of arguing with Yang, Tucker agreed wholeheartedly with him that robots destroy jobs.

You are much better than this Tucker. Please put your liberal college teachers aside and listen up buddy.

We automated away four million manufacturing jobs in Michigan, Ohio, Pennsylvania, Wisconsin, Missouri, and those communities have never recovered. Where if you look at the numbers, half the workers left the workforce and never worked again, and then half of that group filed for disability.

This sounds identical to a Michael Moore rant. Unions destroyed car manufacturing jobs in the Midwest, not robots. Both Yang and Michael Moore conveniently leave unions out of their rhetoric, which is like mentioning a person’s flu but forgetting to mention their stage IV lung cancer.

Explaining the whole story about unions here would be like trying to explain cancer itself, something that takes years for specialists to learn. For a small taste see this article, about how the United Auto Workers union (UAW) turned Detroit into a wasteland. There is plenty more online about how unions wrecked the auto industries and many other industries in not only the Midwest but throughout the United States. Democrats also shut down much of the coal and oil industry for purely political reasons, as part of their plan to replace capitalist democracy with Communism.

Using robots is one way the auto industry can circumvent deadly unions, in their quest to build up again. Naturally, Democrats cannot have that! Having put so much work into annihilating enterprise they are not about to lie down and let it make a triumphant return, so they attack robots with relish, and Tucker encourages them! Oh, the shame…

Now what happened to the manufacturing workers is now going to happen to the truck drivers, retail workers, call centers, fast food workers, and on and on through the economy, as we evolve and technology marginalizes the labor of more and more Americans.

The Left love their Gish Gallops. Yang figures that if he throws a pile of so-called facts at you involving many different areas of work, you will not bother to investigate. Do what I do – select one major issue he describes and concentrate on that. If it turns out to be wrong, there is no reason to believe him about the rest.

So look at truck drivers and examine what exactly is going on with them, and what will happen after truck drivers are replaced by self-driving trucks.

First, a brief look at the Teamsters. From Wikipedia:

The International Brotherhood of Teamsters (IBT) is a labor union in the United States and Canada. Formed in 1903 … the union had approximately 1.3 million members in 2013 … The Teamsters Union is one of the largest labor unions in the world, as well as the 11th largest campaign contributor in the United States… They have donated 92% of their $24,418,589 in contributions since 1990 to the Democratic Party…
[In] 2008… Hoffa said, “We are not going to drill our way out of the energy problems we are facing — not here and not in the Arctic National Wildlife Refuge.”

The Teamsters Union endorsed Barack Obama for the 2008 Democratic Nomination on February 20, 2008.

In the 2016 Presidential Election, the Teamsters endorsed Hillary Clinton on August 26, 2016.

Teamsters are naturally opposed to driverless trucks and will work with other unions to pressure the Democrats to ban them or slow their development. To accomplish this, Democrats will introduce a raft of charges, fees, licenses, registrations, taxes, and other red and green tape to slow down, and in some cases stop such development.

Paying truck drivers is very expensive for any industry. When a company like Ikea pays a billion dollars a year to truck drivers to haul their furniture from A to B, guess who pays? Consumers like you pay for it when you buy a bookcase or a table from Ikea. What happens when Ikea no longer has to pay truck drivers a billion dollars a year to drive trucks? The furniture goes down in price. Initially, the table may have been $300. Now it may be somewhere around $250 – $280.

With massive savings like that, everyone benefits; even the truck drivers. They will find that all products connected with trucking are affected. TVs, furniture, lumber, gas, you name it.

When millions of consumers have a lot more money in their pockets they spend it on other things, like houses, cars, furniture, appliances, vacations, restaurants, sport, travel, operations, makeup, and etcetera. All businesses benefit.

After industry and business find themselves with a lot more cash as a result of (a) no longer having to pay truck drivers, and (b) consumers buying more of their products or services, they employ more people and expand, making employment and wages go up. This takes care of many unemployed truck drivers.

Ex-drivers move into other areas. Aside from all the new jobs springing up in general, as a result of the extra cash owned by consumers and industry, there will be new jobs connected with the new driverless truck industry.

A robot vehicle needs people to service it. It will still require human designers for all its thousands of components. These will need to be conceived, drawn, sketched,  argued over, manufactured, packaged, transported, marketed, advertised, sold, transported again, handled, put together, serviced, fixed, repaired and replaced. Humans will be a part of that process. When a driverless truck breaks down a human will be dispatched to tow it away, at least for some time into the future. When it needs to refuel, gas pumps will have to be developed to allow it to refuel independently. Someone needs to design those pumps, and they will go through the same chain of actions, from sketches to installation, servicing, and replacement that trucks will. Gas pumps are just one example of how technology will change to service the driverless vehicles, out of thousands, and all will require work by humans along the way, thus creating millions of jobs for humans.

Tucker, your Democrat guest Andrew Yang is an anti-industry shill for the Left, no better than Michael Moore, intent on halting development and killing jobs, using scaremongering about lost jobs as a front – and you fell for his lies.

There is about as much chance of driverless trucks killing jobs as there is of Andrew Yang becoming POTUS. They will create jobs. People will move from driving vehicles to other roles, and there will be millions of new jobs to choose from.

I always qualify the above with the fact that welfare provides incentives for lazy people to use lame excuses to freeload. A lazybones who works as a truck driver but would love to lounge around at home instead can always use the explanation of being laid off to go on welfare.

“Aw, well, I was replaced by a robot truck so what can I do?” he might whine.

A less lackadaisical man would enroll in a training course to learn a different profession and go get a new job. If there were no jobs in his area, he would move to where there were jobs. Slothful people have an endless supply of excuses, but in reality, they can work if they want to. Many do not want to work – that is the problem.

This is why welfare needs to end. It kills the incentive to work. The bleeding hearts who introduced it only increased poverty. In their blundering attempt at helping they made things far, far worse.