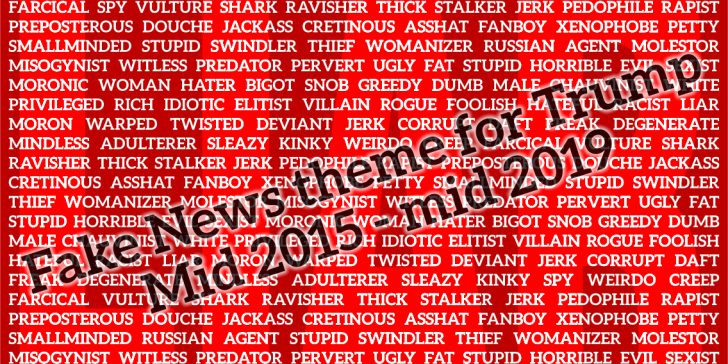 When Donald Trump launched his 2016 presidential campaign on June 2015, Fake News and the Democrats began attacking him from all sides, accusing him of anything and everything they could dream up. No old wives’ tale was rejected. Any twisted misinformation would do. The DNC and their propaganda department – the media – behaved like a Fire ant nest poked with a stick.

After he became President, this attack continued. Their strategy was that if they lied enough about Trump, they could do well in the mid-terms, and perhaps use Mueller to achieve impeachment. Thousands of reporters in those days appeared to believe their own indoctrination, such was their enthusiasm and naïveté. Many were college grads, still clinging to their Brainwashing Awards (B.A.s) proudly. They would be put to work writing nonsense all day long for a fraction of the cost of real journalists.

The most prominent theme they used, the backbone of their propaganda, was that Trump was a liar. This theme was more significant than the Russia hoax as it was infused into most Fake News daily, even hourly and minute by minute. You could hardly read or watch a report on Trump without the liar accusation appearing multiple times.

While this was all going on the Democrats used elderly Robert Mueller to front an attack on Trump that was supposed to expose the President’s lies. Regardless of what they found out about Russia, Democrats believed they would unearth tons of other dirt to hang the POTUS with. One thing none of them considered was that Trump might be an honest businessman. Such was their hatred for capitalism; they assumed Trump had to be guilty of thousands of lies to the IRS and government in general, primarily through his businesses. Since none of them thought his innocence was a possibility they had no back-up plan for that scenario.

After Mueller and his henchmen were unable to find any dirt at all on Trump, the Left was stunned. After accusing Trump of lying about a jillion times, it was now clear he was very, very honest. They had failed miserably and looked ridiculous. Following that embarrassing fiasco, they had to let go of their ‘liar’ campaign, so they changed it to ‘Racist.’

Lefties will continue bombarding us about him being a liar and a Russian spy, etc., but the word Racist will appear consistently between now and the 2020 election.

Although they have tried to put on a happy face, Fake News reporters were severely effected by Mueller’s massive failure. They knew that if Trump was the liar they had been claiming he was, all this time, Mueller and the FBI would have uncovered much material. Yet they came up with nothing; not even the tiniest lie. What does that mean?

That has caused much dread in Millenial reporters, who were so sure of their position. They believed their own propaganda during the ‘Liar’ phase, but since then many are having second thoughts. Reporters have noticed how mindless CNN is, and are disheartened. It appears they have been watching Fox News and Breitbart.com to find out what really goes on.

You ask, “How can you tell? Where is your evidence?”

A short time ago, it was easy to find hundreds of pieces written by enthusiastic Trump bashers, and many contained the vigor you find with winners. Their righteous confidence drove me to expose their mistakes, reveal juvenile errors, and post photos of their childish, silly faces.

Now they write without that divine faithfulness. Lies are written in a plodding, almost transcribed manner, as you might expect from disappointed Pravda apparatchiks. Their editors push them, and they comply, to keep their jobs, but with heavy hearts. As I look now through their work, I find little incentive to pull it apart. It is easy to see it is all rubbish, so there is no adventure in exposing it.

How did this come about?

Young socialist propagandists would sit at work writing their nonsense all day, but much of their misinformation was torn apart on social media and various conservative sources. When dozens of tweets exposed their lies, a little investigating would show them their stories were just plain wrong. They were quickly able to see their critics’ proof. The internet is great for seeing what is right and wrong, fast. All they had to do was click a few keys to be very, very embarrassed.

That embarrassment was suffered day after day, week after week. Editors could not expect fledgling co-workers to shrug off such shame and remain chirpy. Most are now feeling glum, and it shows up in their work. It no longer sounds convincing because the writers are no longer convinced. They watch Fox News and see everyone laughing at their folly.

Since they are selling their country out to Socialists in return for a wage, I have about as much sympathy for them as I do for Nazis who were ‘just following orders.’ Unlike today’s socialists, National Socialists had no internet, so they could not see what millions were saying about them, in just seconds. They would go for decades believing their beloved Führer’s lies.

Today employment is bountiful thanks to Trump, so reporters have no excuse. They should quit and find a job they can be proud of. History will remember those who continue the lies, with searing contempt.

As for the fatuous ‘racist’ slander, nobody believes that for a minute. We all know Donald Trump does not have a racist bone in his body, and we also know he is not a liar. A more honest man Robert Mueller will never find.