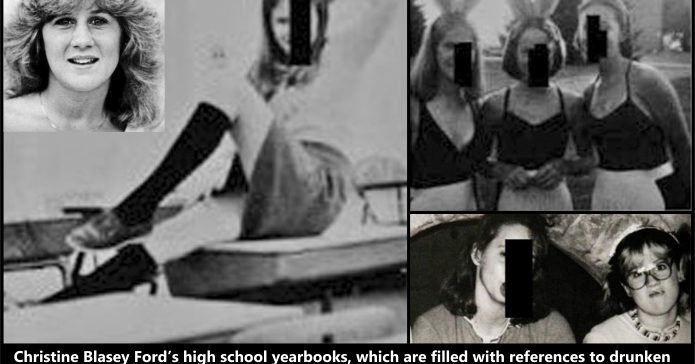 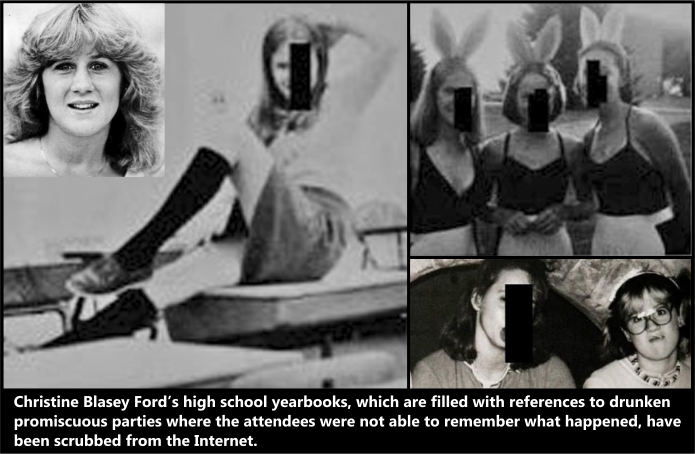 Like everyone else, I watched in amazement as Democrats fabricated sexual assault charges against Brett Kavanaugh. They use this dirty trick every time they want to block someone, but the zany abandonment of the rule of law, in this case, was indeed Monty-Python-ish. When I watched Professor Christine Margaret Blasey Ford testifying against Brett, I found her testimony unconvincing. While everyone else gushed about how sincere it was, I guffawed out loud – it was amateur acting, and I didn’t believe a word. Suspicious of the woman, I searched online and found there was much more to Ford than Fake News was letting on. From Wikipedia:

“Ford lives in Palo Alto, California, with her husband Russell Ford, whom she married in 2002, and their two sons. She is the aunt of actress and singer Bridgit Mendler. Ford is a registered Democrat who has made small contributions to political organizations. In 2017, she participated in a local Women’s March protesting President Trump and attended a March for Science in San Francisco to protest the Trump administration’s cuts to research. Ford has considered moving to places such as New Zealand if Kavanaugh were to become a Supreme Court Justice.”

It turns out that her yearbook was also very revealing, and the Left had it removed from the internet and censored. Alex Jones managed to uncover some of the sleazy information to present it in the following video.

It’s clear that the Democrats want to abandon the rule of law. If I wanted to accuse Christine Blasey Ford and many high ranking Democrats of heinous sexual assault from decades ago, it would be easy enough. I lived in California for a while in the early ’90s, and could quickly put together a story and make my charges. Then it would be up to Ms. Ford to prove she was innocent, and of course, she would have to insist the FBI do an investigation, because, according to the Democrats, she would be guilty otherwise. If I were to put up such a false allegation, it might go like this:

I was able to recover a repressed memory of long ago, when I was raped by some Democrats and liberals, including Professor Christine Margaret Blasey Ford. It has been an arduous journey for me, but I will now divulge the details as best as I can. Believe me, I don’t want to do this – I am scared stiff – but I will do it for the brotherhood of sexually assaulted old white men; the survivors.

In 1990 I moved to California with my wife and two daughters. At first, we drove up and down the West Coast, staying in Seattle, San Diego, Los Angeles, and Santa Barbara. Eventually, we hunkered down in Pismo Beach, and my children began going to the Shell Beach elementary school. Around the third week in October, I went to San Francisco to discuss advertising with the newspapers there. It was a warm day, so I went down to the pool at the hotel I booked, though I can’t remember which hotel that was.

Stretched out on a deck chair I heard a voice asking me if I was going to the ‘gathering.’ Sitting up and squinting across I saw a 24-year-old Christine Margaret Blasey, who worked at Stanford University, a few miles away.
—“What gathering?” I asked, and she marveled at my Australian/Canadian/English accent. She propped herself up on one elbow and seemed very interested in me.

After an hour or so a group of others came along, including Nancy Pelosi and Chuck Schumer, to pick Christine up. There was some kind of Democratic event happening, and I was invited to the after-party. That night I had one glass of beer at the party, and Christine Margaret Blasey followed me up the stairs as I went to the bathroom. At the top of the stairs, she pushed me into a bedroom and shoved me onto the bed. It was there that she was joined by Nancy Pelosi, who grabbed my feet. I saw Chuck Schumer enter the room, wearing only a jockstrap. He helped Nancy secure me while Christine Blasey straddled me like a horse. She grabbed my testicles with one hand and covered my mouth with the other. She taunted me mercilessly about being a stupid white conservative man and threatened to beat me senseless if I didn’t submit.

When I awoke two hours later my anus was bleeding and swollen. After hobbling down the stairs, banging against walls as I went, I flew back to Pismo Beach. Rather than tell my wife what happened, I made myself forget the horrible experience. It managed to stay forgotten until, after all these years, I saw Professor Ford on TV testifying against Brett Kavanaugh. Her face looked like a mummified version of what I remember, and it brought back terrifying feelings. That night in bed I had a terrible dream in which it all came back. The nightmare was so real I knew it must be a recovered memory, which I have read about. Though debunked by psychologists the world over, a small group of man-hating feminazis still practice the black art of installing ‘recovered memories’ in ‘womyn’ of all kinds, to help them win their palimony suits against dreaded old white men. It was one of those.

This gang of Democrat rapists must be immediately investigated by the FBI, and I know they will agree with me since by their own testimony they should all WANT the FBI to examine them. As they said, they must be guilty until they prove their innocence, and since I have made the charges, I must be telling the truth. They must want such an investigation to make things right so that we can put an end to this terrible state of affairs, and give Americans a chance at closure.

If I am to be interviewed, I have a few conditions. First I hate trains, planes, and automobiles so I will need to walk to the questioning place. On the other hand, I might change my mind about that later. Also, I don’t want to be pestered with detailed questions like when, where, who, what, etc. I don’t remember the exact date or location, or who said what. All I know is that Professor Ford breathed her horrible boozy cigar breath on me and squeezed my testicles with real feminazi anger, as Pelosi and Schumer did unmentionable things to my anus. Maxine Waters used that black dildo, and Weiner took plenty of photos. I don’t want to have to appear in the flesh – we can do the interview on a TV hookup. Afterward, if I change my mind about anything, I don’t want to be sued. I can vary the story according to my dreams and what the recovered memories choose to do.