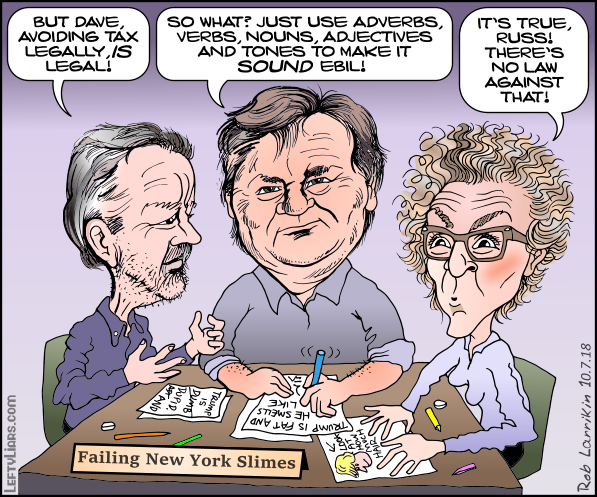 Lefty Liars tried especially hard to discredit trump in the run-up to Brett Kavanaugh’s confirmation as a Supreme Court justice. It wasn’t just their vulgar attempt to sabotage Trump’s choice with the anti-Kavanaugh demonstrator, Christine Ford, a registered Democrat, by smearing Brett with baseless sexual accusations. New York Times reporters Russ Buettner, David Barstow, and Susanne Craig tried to make Trump look like a liar and tax fraud in their October 2 hit job, which they described as a Special Investigation.

The 13,000 word ‘article’ was a piece of theatrics with credits at the bottom, listing producers, animation, music, aerial cinematography, illustration, and so on. Twenty-two people are mentioned.

It was indeed theatrical, and the deceptive method they used was a basic schoolyard trick employing adverbs, verbs, nouns, and adjectives, along with tone, to create a spooky nothingburger. To illustrate the technique I will post a paragraph of perfectly innocent text about Snow White and the Seven Dwarfs, and then rewrite it using different adverbs and tones to make it sound sinister, without saying anything that could get me sued.

The ‘pimped up’ version:

Suspiciously, it is claimed the 1937 animation Snow White and the Seven Dwarfs was produced by Walt Disney and supposedly released by RKO Radio Pictures, though some dispute this, and others describe Disney as less than honest about the matter. We are told there are those who believe it may have been based on the German fairy tale by the Brothers Grimm, but one source claims it was pure plagiarism; that Walt had no original ideas of his own, and insists it was not the first full-length cel-animated feature film. It is claimed Disney had others before this that praised Adolf Hitler, though we cannot verify this. Whether true or not, it cannot be denied the story was adapted by storyboard artists Dorothy Ann Blank, Richard Creedon, Merrill De Maris, Otto Englander, Earl Hurd, Dick Rickard, Ted Sears, and Webb Smith. What does that tell you?

Likewise, in the pimped up version of Trump’s tax history, Russ Buettner, David Barstow, and Susanne Craig use many criminalistic terms like, ‘his cut’, ‘sold himself’, ‘tax dodges’, ‘dubious’, ‘schemes’, and they say he “broke with tradition” by declining to release his tax returns. That’s just a cheap lie since there is no such ‘tradition’ of billionaire businessmen Presidents releasing tax returns. You can understand ordinary POTUS releasing tax returns because they were government bureaucrats, with boring tax returns. A billionaire businessman has much more in his tax return and releasing it for public viewing would give his business competitors a great advantage. Only a foolish businessman would do such a thing, and Fake News knows this. Were he a Democrat they’d never mention his tax returns!

Through their 13,000-word, 25-page beat-up, the so-called reporters only used the word ‘lie’ twice. On one of those occasions, it was regarding the allegation that Trump used an alias to try to get himself on a magazine cover when he was young. That was Fake News itself, as you can see here.

It is very telling that they didn’t accuse him of lies all the way through since the impression they gave was that this was a great discovery of Trump’s corruption. Trump’s attorneys summed it up well when they released the following statement:

The New York Times’ allegations of fraud and tax evasion are 100% false, and highly defamatory. There was no fraud or tax evasion by anyone. The facts upon which the Times bases its false allegations are extremely inaccurate. All estate matters were handled by licensed attorneys, licensed CPAs and licensed real estate appraisers who followed all laws and rules strictly. All matters were filed with the IRS and New York taxing authorities. The returns and tax positions that the Times now attacks were examined in real time by the relevant taxing authorities. The taxing authorities requested a few minor adjustments, which were made, and then fully approved all of the tax filings. These matters have now been closed for more than a decade.

President Trump had virtually no involvement whatsoever with these matters. The affairs were handled by other Trump family members who were not experts themselves and therefore relied entirely upon the aforementioned licensed professionals to ensure full compliance with the law. Should the Times state or imply that President Trump participated in fraud, tax evasion, or any other crime, it will be exposing itself to substantial liability and damages for defamation.

Then there is our sneaky reporters’ use of the word fraud. Although there are ten instances of the word’s use, there is only one case of them actually accusing Trump of fraud, and even that is not very strong. They said [emphasis mine], “President Trump participated in dubious tax schemes during the 1990s, including instances of outright fraud…”
In other cases, the word fraud is used to imply fraud without actually stating it. For instance, they said, “The most overt fraud was All County Building Supply & Maintenance, a company formed by the Trump family in 1992.”
That sentence stated nothing in particular and was thus legally safe to write. Because “All County Building Supply & Maintenance” cannot be a “fraud” the New York Times cannot be sued for saying what sounds like an allegation of fraud.

The article has animated sections that illustrate Trump’s business dealings, and the tone and atmosphere are designed to convey dark and evil deeds. It’s easy to do. Take any perfectly innocent activity and make a presentation using the same tactics, and you can make your own grandmother look like an evil gangster. There she is in the kitchen making breakfast; a simple old woman making eggs, bacon, and coffee. As she waddles about, tending to this natural activity, let’s add some ominous music and have a grave commentator say the following, while figures and numbers zip around the screen.

Ms. Smith may look innocent, but looks can be deceptive. Holding a weapon that can decapitate a small child in seconds, the carnivore pours boiling water, that could blind someone if thrown in their eyes, into a container. Adding a strong-smelling brown substance to this, she stirs the brew before tending to her pig meat. Burning two chicken embryos in a pan over hazardous naked flames that could give an infant third-degree burns in seconds, the slaughterer flips bleeding flesh, while yawning, as though it is nothing. She has no sympathy for the ungulate that lived and breathed only days before when it was slain for its meat. That doesn’t bother the white executioner, as long as she has an intelligent beast to gobble. Worse yet, she intends to feed the tortured swine and embryos to her white, wealthy son.

It’s called ‘beating up’ a story. The name probably comes from beating eggs. You scramble the truth with drama to create a soapy, hammy B-grade drama that gullible people believe. The New York Times wants you to think Donald Trump is Don Vito Corleone from Mario Puzo’s ‘The Godfather.’

Anyway, they failed. After all that work, Brett Kavanaugh was still confirmed as a Supreme Court justice. All’s well that ends well.