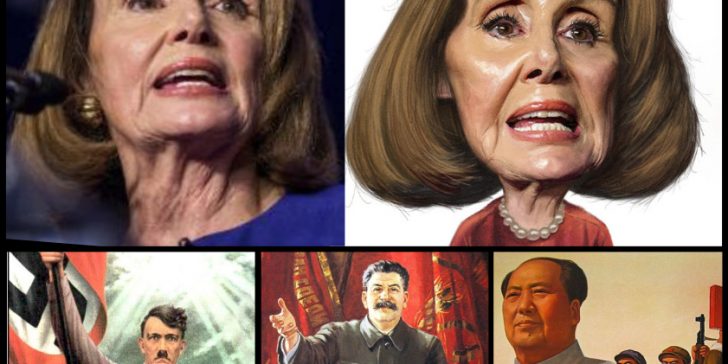 Lefties have infected every sanctum of publishing, with even magazine covers succumbing to the contagion. Take the latest Time Magazine cover for instance. What was meant to be a propaganda poster failed dismally, and all it took to mess it up was a girl with a BA and a tattooed art-school dropout. Molly Ball wrote this Time Magazine piece yesterday under the main cover title ‘THE ART OF THE DUEL,’ a play on Donald Trump’s book ‘Trump: The Art of the Deal.’ 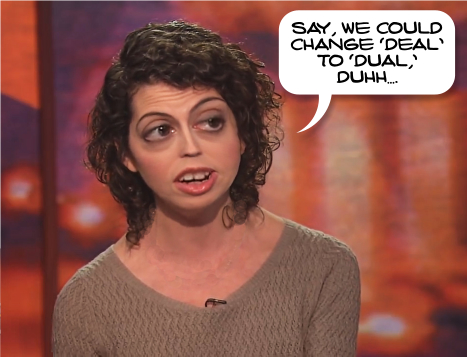 A new year has dawned in Washington, and this is what it looks like: a partial government shutdown in its third week;

a new Congress sworn in only to sit on its hands;

That happened Jan 3, so now you’re going back in time 19 days, but at least it was closer to the dawn of 2019. You are still three days out, however.

You just said Pelosi refused to cede an inch, and now you say she was negotiating. The truth is Pelosi is refusing Americans their mandated wall, or to negotiate.

Airport-security personnel are working without pay.

Wrong. Their pay is merely being put aside, and will likely be paid back with interest.

Perhaps Time Magazine should let their fact checker go over Molly Ball’s next article before allowing it out of the sandbox.

But step back from the sordid details, and you could hardly get a more accurate tableau of America’s new political reality: a nonfunctioning federal government

whose leaders, each insisting the stakes are too high to budge, have retreated to their corners.

You may compare Trump with a boxer because he is fighting for America. Pelosi is the brat petulantly sitting on the floor with crossed arms, refusing to do anything.

At the center of the drama are the two towering figures

One towering figure; the other is a hell-hag fit only to be mounted and stuffed for use as a gargoyle.

whose clash will define the next biennium:

Trump defines this fight while Pelosi defines nothing. She refuses to do anything, and nothing people define zilch.

Trump and Pelosi, the yang and yin of a divided America, two powerful leaders with their credibility on the line, both convinced they hold the winning hand.

This is double-talk. To begin with, yin and yang are not divided but connected. Yin and Yang cannot exist without each other and are never separate. For example, night and day form a Yin-Yang pair. Trump’s credibility is not on the line, and Pelosi has no credibility, to begin with. Trump already won the “winning hand” in the form of a mandate to build a wall during the 2016 Presidential Election. He won the mandate that Pelosi will not honor. She is the thief trying to steal his four aces.

After that, Molly Ball dives into further Fake News, singing about the wall being unpopular with the public and other clichéd nothingburgers. Time Magazine needed cover art to go with Ball’s article, so they hired this guy: 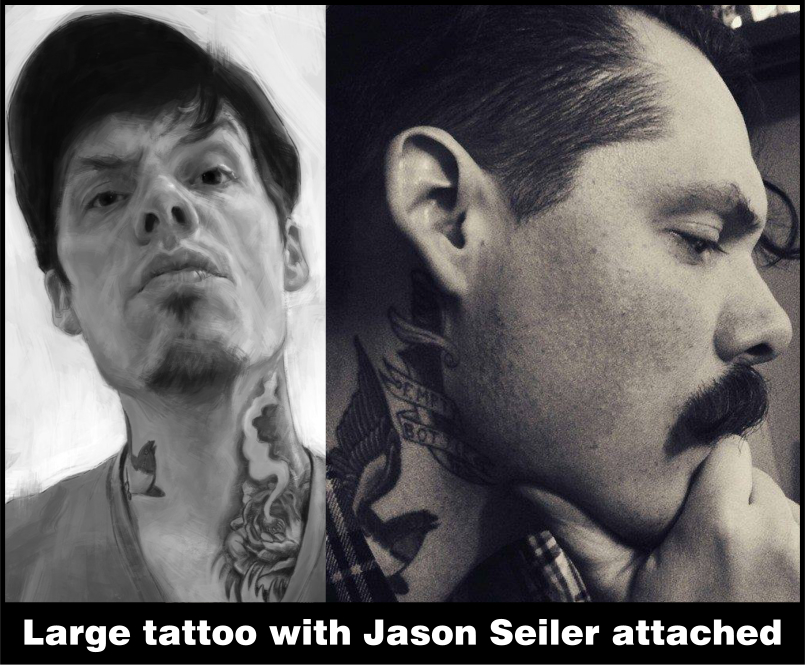 Jason Seiler lives in Chicago. He started an art course at the American Academy of Art in Chicago, a four-year course, and seemingly dropped out after two. It helps to explain a few problems with his cover art for Time. 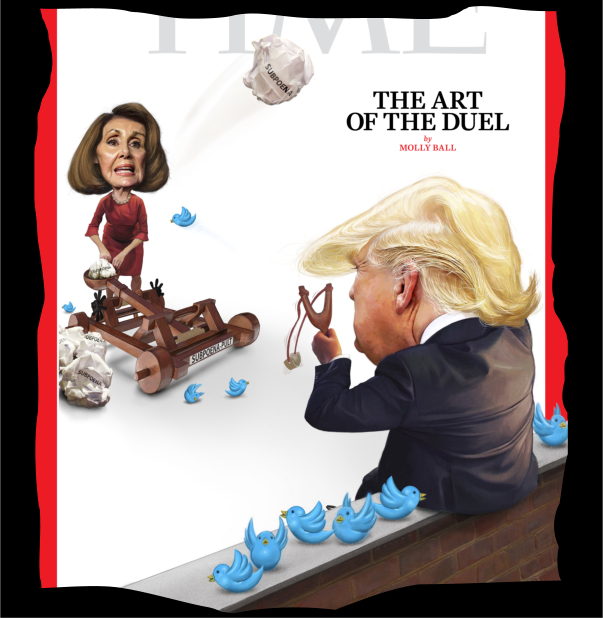 Starting with the artwork itself, Trump is sitting on a common suburban variety wall, made of bricks. To Seiler, a border wall is no different from his grandma’s garden fence. You can take it apart with a crowbar. Next; Trump’s hand fails anatomically. Taken from the net somewhere, Seiler squashed it onto the end of the arm, at the wrong angle.

That is why you need those last three years of an art course and the life drawing that goes with them. Trump’s left arm is not extended as it would be if firing a slingshot.

Pelosi’s catapult would not be loaded and cocked while her missiles were in the air, and her body was taken from someone who was either mixing salad or washing dishes. You can see where Seiler took his Trump head, using a Google Image search for “Donald Trump’s hairstyle” without quote marks. At the time of writing it is the tenth image that appears. The photo is from this page. Here are the before and after images.

Pelosi was a little harder to find; she showed up in a search for ‘nancy pelosi’ about 230 photos from the top. It links back to this CNN page. 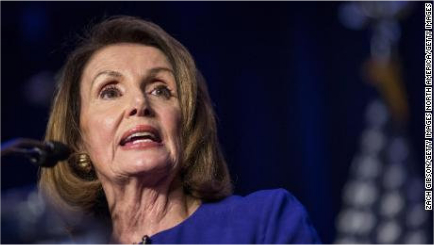 While Seiler made Trump look like a fat slob, he made Pelosi look younger and gave her more defined features. He made her cheekbones more prominent, added teeth, makeup, and thinned down her fat, rope-like neck. Seiler improved her hair, eyes, eyebrows eyelashes, and eyelids, to give her an intelligent, concerned look as opposed to a senile one. How often do you see a caricaturist improving a wrinkly old half-witted politician? Propaganda poster makers did precisely the same thing with Hitler, Stalin, and Mao. They were told, “Make him look younger, smarter and concerned.”

As for the theme, the only opponent shown is an old lady, but Trump has the entire media against him, including thousands of newspapers, magazines, TV stations, radio stations, online networks, bloggers, discussion boards, Leftist organizations, Google, YouTube, Wikipedia, all colleges and schools, Hollywood, millions of left-winged voters and the Democrats. Feminists, most blacks, Hispanics, Indians, Arabs, and Muslims oppose him. Environmentalists, socialists, communists, most criminals, and illegal immigrants are against him. Yet the only adversary shown in Time’s propaganda poster is one little old lady!

Another lie is that Trump is only firing off tweets. The man works 20 hours a day, 7 days a week re-building America in a thousand different ways – way too many to mention in an article this size. He does rallies regularly, filled to the brim with tens of thousands, meetings, White House speeches, press conferences, private phone interviews, and hundreds of other events. Tweets, which are very important, only represent a tiny part of his workload, but remember, each tweet is then magnified by being repeated by media around the world, appearing on millions – nay, billions – of TV screens each day. Many fools on the Left live for their tweets, and they reason that if Trump uses tweets effectively, he must be working on them full time…

Finally, it was appropriate that our propaganda poster boy, comrade Jason Seiler, had comrade Pelosi firing screwed up subpoenas at her President.

They are indeed screwed up.