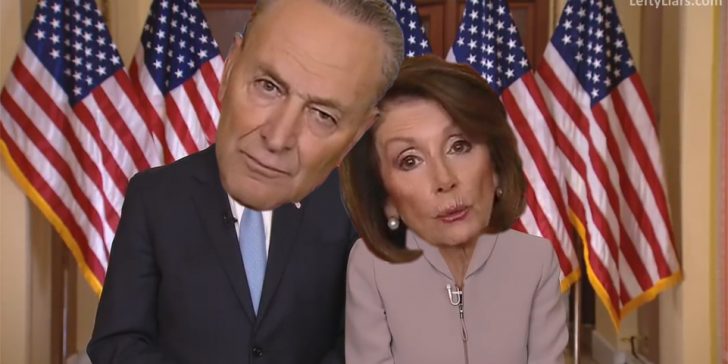 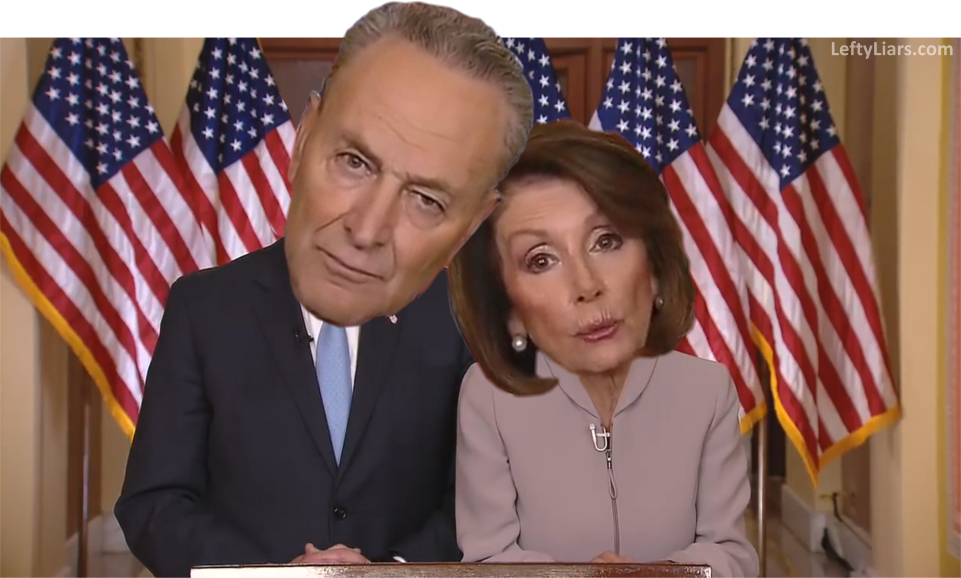 One thing Socialists like Chuck Schumer and Nancy Pelosi cannot imagine is that a partial shutdown of the government could save money, but that is precisely what it does. Liberal Media believe the government is everything; that it creates jobs and wealth. The idea that shutting it down could save money is anathema to them, so they instruct their comrades in Fake News to tell us that shutting it down costs more, which is untrue.

Jim Tankersley wrote this article today for the New York Times, entitled, “A Shut Down Government Actually Costs More Than an Open One.”

A federal government shutdown might seem like a great way to save money: When agencies aren’t open, they aren’t spending tax dollars. But history shows us that closing the government actually costs more than keeping it open.

Shutting down specific non-essential government departments is a great way to save money, and would be even better if wages did not have to be paid eventually, but even with those wages, the costs saved to taxpayers is phenomenal.

Shuttered parks can’t collect entrance fees. Furloughed workers will ultimately get paid for not showing up to work. And the government will wind up having to pay interest on missed payments to some contractors.

Though Chuck, Nancy, and Tankersley would never agree, the best thing to do with parks is to privatize them. The government should not be in the business of tourism or any other enterprise. It should confine itself to running courts, taxation and the government itself, and leave parks, tourism, fishing, rivers, oceans, aviation, communication, education, health, transport, roads and everything else to the private sector. A charter may dictate specific rules (with limits) for some parks, but that is the only involvement government should have.

Putting that aside, and limiting the argument to government-run parks, the amount saved in shutting them down still outweighs the owed wages and interest on missed payments to some contractors. Tankersley has forgotten about the tremendous waste that goes on in government facilities.

To compare, consider a private farm open to tourist groups. The farmer has machinery that might be a few years old, but it is clean and functional. He keeps the twelve-year-old tractor going by servicing it every month and cleaning it once a week. The fencing was built thirty years ago, to last. It might be tarnished, but it works, so why replace it? If a cow is severely injured and in pain, the farmer may shoot it to put it out of its misery. It might then be sold to a dog food factory, and the hide might even be used to make leather products, so money is made. Notice the living quarters for the farmer are forty years old, and again, all the furnishings are old but functional. The ten-year-old refrigerator is still working well, as is the ten-year-old TV, and thirty-year-old couch, and so on.

Now, look at a government-run park. Most of the machinery is brand new and state-of-the-art. It is not their money, so they replace equipment every two or three years. Employees drive around in mint condition trucks, cars, scooters, buggies, and tractors. After all, they don’t have to pay, you do, so why not let you pay for the best? See the brand new fences, and only the best will do – much better quality than the farmer’s. These ones come with fifty of the best surveillance cameras money can buy. The farmer would have loved those too, but he has to be careful with his money to make a profit so he will keep using the two or three ordinary cams he put in six years ago.

If an animal in the park is severely injured, the park rangers will bring in a vet, load the animal on a truck and take it to the animal hospital where it is worked on by surgeons. After a six-hour operation the beast is saved, using a titanium brace to fix the leg break, and while they were at it, they set its teeth, removed some ticks and implanted flow probes, arterial catheters, and ultrasonic crystals, along with a small camera to monitor its travel patterns.

The bill for the whole operation is $250,000. It would have been $50,000, but people in the industry help themselves to some of the goodies. The surgeon might use a stainless steel splint but charges for a titanium one, and so on. Still, at least the deer is saved. Meanwhile, down the road, a deer hunter shoots a deer and takes it home on the hood of his truck.

Tankersley then lists some ways he thinks the shutdown raises costs for the federal government:

Compared to the scams, rackets, theft, inefficiency, legal costs when sued, long term costs of mistakes and a hundred other factors, Tankersley’s list is small potatoes. Government employees hire relatives, give contracts to friends, accept bribes, steal, skim, blackmail, extort, and rent out government equipment. They fake accidents and then get their government employee benefits in the form of insurance and social security, golden handshakes, side benefits and so on, for the rest of their lives. There are a thousand ways they scam the system, and taxpayers foot the bill for all of it.

Tankersley put up the following graphic complaining that this government shutdown is one of the longest ever.

Heh. More importantly, this is how many more days Democrats shut down the government. It looks like Trump has 49 to go to make up the difference. 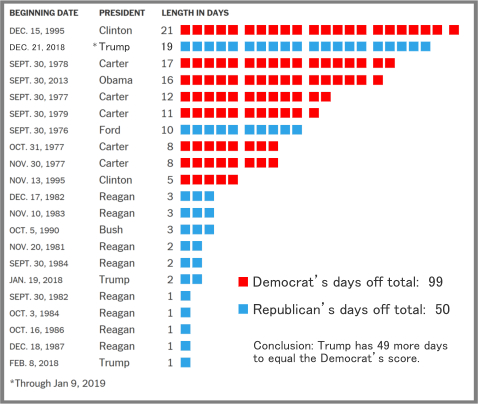 So who is this Jim Tankersley, anyway? 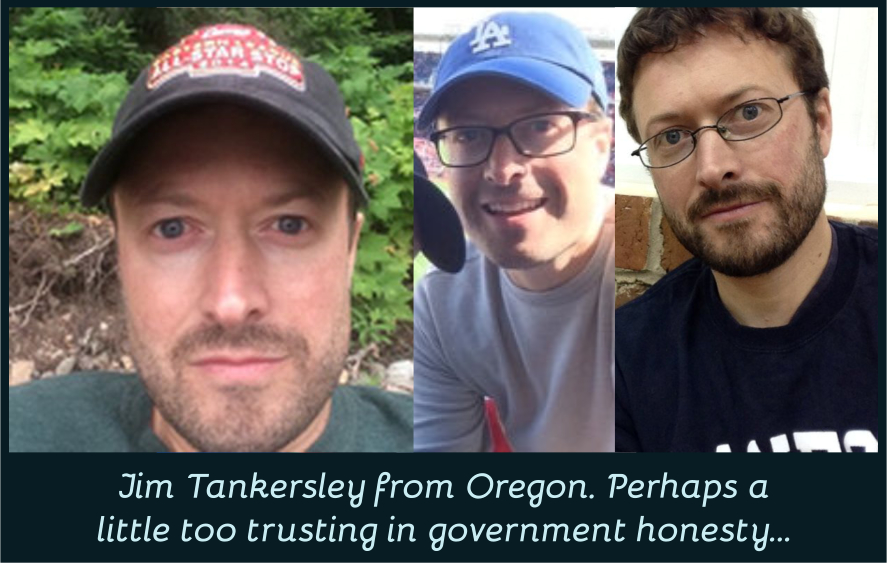 Jim is from McMinnville, Ore, Oregon, exactly 333 miles from where I was born, in Mission, B.C., so I guess he must be okay, even if he is a fan of Star Wars.