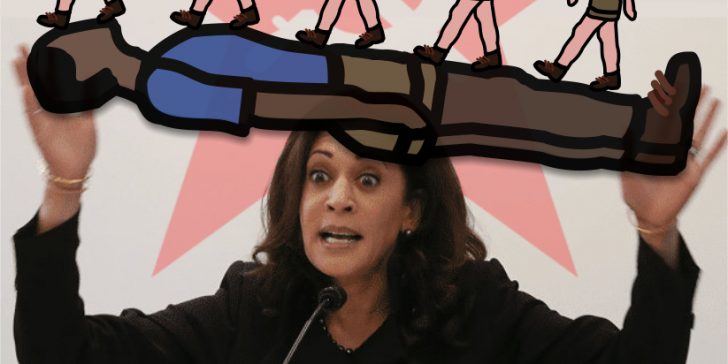 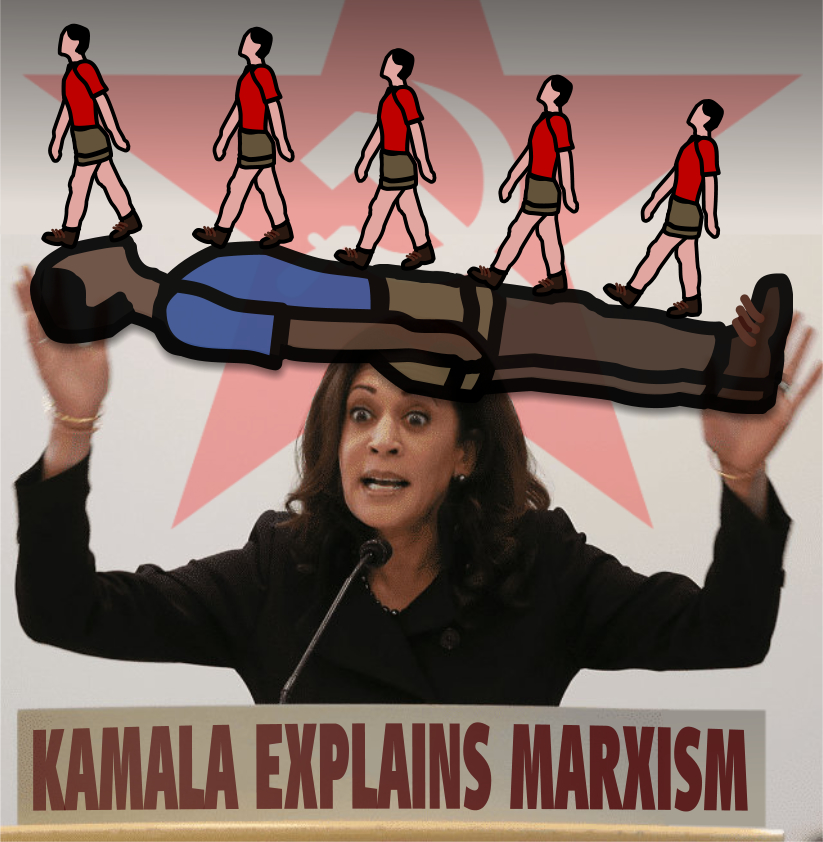 Kamala Harris promoted Socialist ideology yesterday, just one day before a Presidential Election. She published a video on Twitter, which she voiced over, explaining how socialism works, in a way designed to trick younger people into accepting a big fat lie.

Please watch the video she tweeted here, and should it disappear, see the backup here.

The fifty-second animation is a campaign ad for Biden/Harris 2020. It is cheaply made and simple. The story replicates a worn-out theme used by Marxists in communist schools time and again across the failed Soviet Union, and today, in failing communist states like North Korea and China.

You may be scratching your head, saying, “But the video seemed rational and right. What is wrong with it?”
Let us break it down to see why it is nothing more than sleight of hand – a trick. The evil story is in five basic parts.

In part one, we are provided what magicians call misdirection. Marxist Kamala wants you to believe the issue is about equality versus equity, but the problem is not about that at all. She says, “So there’s a big difference between equality and equity.”

It is a mischievous diversion to deflect attention away from the real issue, which is, “How can I make money?” 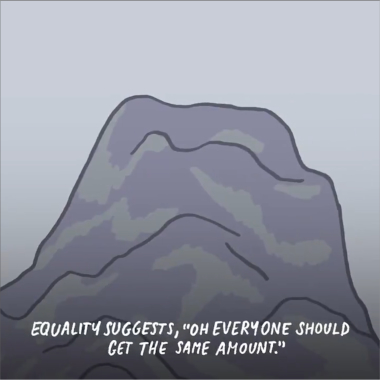 Take your elderly grandmother, who has gout, and whose toes feel like they are being crushed in a vice. She needs a twenty-minute massage every night to manage the pain. Nobody else in the family requires such a massage since their feet are fine. Yet, according to Marxist Kamala, EVERY PERSON IN THE FAMILY MUST HAVE THE SAME AMOUNT – A TWENTY MINUTE FOOT MASSAGE! ONLY THEN CAN THEY BE EQUAL!

Another example is your brother Peter, who is a professional weightlifter. He must work out with weights every day for six hours to keep his bulging biceps in shape. Everyone else is happy with just a regular amount of exercise. However, according to Marxist Kamala, EVERY PERSON IN THE FAMILY MUST HAVE THE SAME AMOUNT OF EXERCISE DAILY – SIX HOURS OF WEIGHTLIFTING!  ONLY THEN CAN THEY BE EQUAL!

It is patently absurd. All people are different and have different needs. To say they must all be the same to be equal is to try to turn humans into bees. They say the Left has a ‘hive mentality’ for a reason. 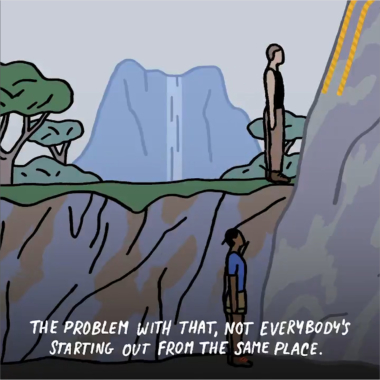 Part three brings us the second lie; that black people do not have the same opportunity in America as white people. The third picture shows a white boy higher up, in the right position to grab his rope, and the black boy too low to reach his, which is malicious Marxist claptrap.
It is well known that if you work hard in the United States, you will be successful, but there are conditions. You must:

People leave other countries to enter the U.S. because there are too many barriers to success in their own nations. If Kamala’s idea that colored people cannot be successful in America were true, how does she explain Barack Hussein Obama becoming President? How about her colored friends in The Squad – Alexandria Cortez, Ilhan Omar, Ayanna Pressley, and Rashida Tlaib? How did these four colored women obtain seats in the House of Representatives? How did Kamala herself become an attorney, a junior United States senator, the Democratic vice presidential nominee, and, should the Democrats win office, the probable President of the United States? Could she have achieved this in China, where 99.9% of the communist politicians are Chinese-born males? According to Kamala, everyone is equal in that communist state, which is far from the truth.

Why does Kamala think Mexicans, Africans, Chinese, and Middle-Eastern asylum seekers flood into the United States? To be downtrodden? To be treated unfairly? No, it is because the American Constitution makes them equal to everyone else. Why would she be so hell-bent on changing that system?

Marxist Kamala Harris tells you that you will always be behind old Whitey if you are black, yet millions of successful black people exist in the United States. Their living standard is far better than that of their African counterparts, who mostly live in grinding poverty. That is because African governments are far closer to Marxism – the very thing Kamala wants you to adopt.

Today many blacks are taught by Marxists like Kamala that they cannot be successful in the United States. Why are they lying to you? The answer is that China wishes to rule over an entirely communist world. Joe Biden and Kamala Harris are loyal to China and will help it crush the United States. The first step is to turn America into a Marxist state.

Returning to part four of Kamala’s propaganda film, what is the solution she proposes for the poor black slob who cannot get high enough to grab his rope? Why magic, of course: 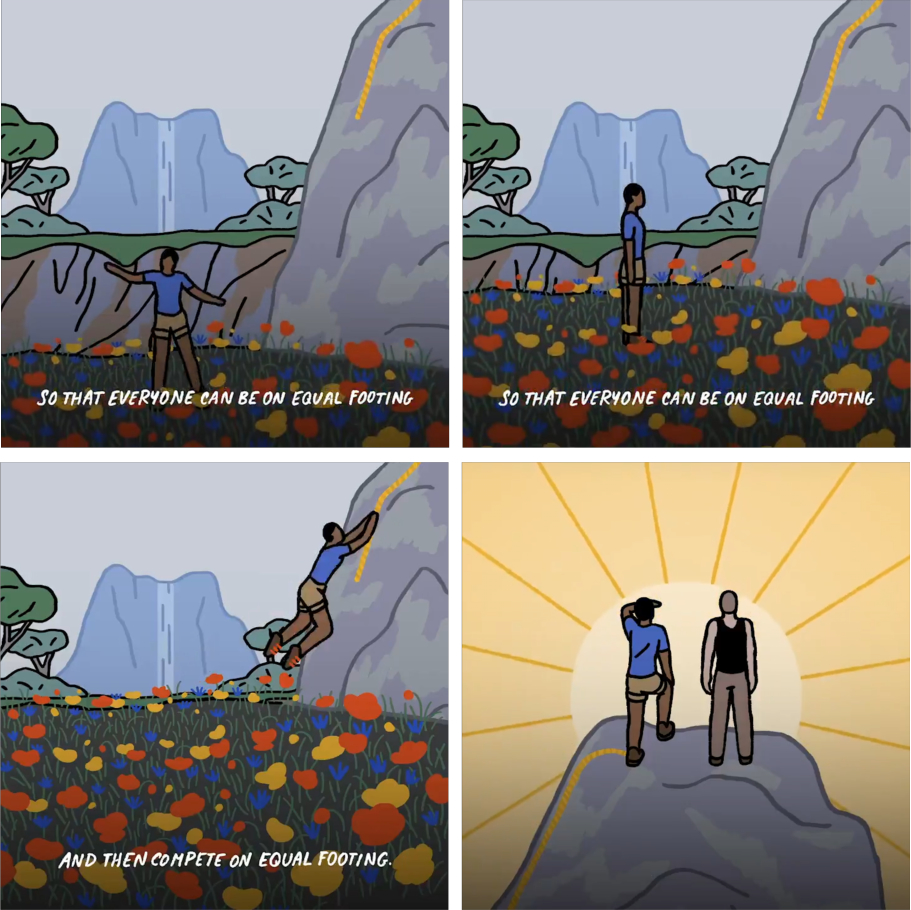 Suddenly, the ground is covered in grass and flowers and begins to rise, lifting the black deadbeat to the rope. In part five he is now able to grab it and climb the mountain of success.

But wait. What Kamala does not tell you is that the earth does not suddenly bloom flowers and begin rising without a great deal of work and effort. Who will provide this? Let’s be practical. To make the land change like this, Kamala would need to order the hundred local villagers to bring shovels and do hard labor. The villagers would need to dig dirt, take it to the site and build it up. After many days or weeks of back-breaking work, the villagers would then need to sow grass and flowers into the soil and water it each day until they flourished. Finally, the black boy would be able to grab the rope.

Why would any of this be necessary? Why can’t the boy find his own way up to the higher dirt without making the villagers do hard labor for him?

Instead of making a hundred villagers toil and slave to raise the land for you, get off your lazy ass and walk around, just like the white boy did. It involves work, so work!

There are plenty of poor white people in America, especially ones who do not work hard. If you wish to be poor, copy them. If you would like to be rich, copy what rich white and black people do. Work!

Marxism is not the answer! It causes famine, poverty, disease, and death on a huge scale. Capitalism does succeed, and, when combined with the United States Constitution and the rule of law, it creates wealth, as long as people work hard and follow the rules.

If you want a productive, happy life, your first step is to vote for Donald Trump. Then find a job, save money, and gather wealth. Never listen to caterwauling Marxists like Kamala Harris or Joe Biden.