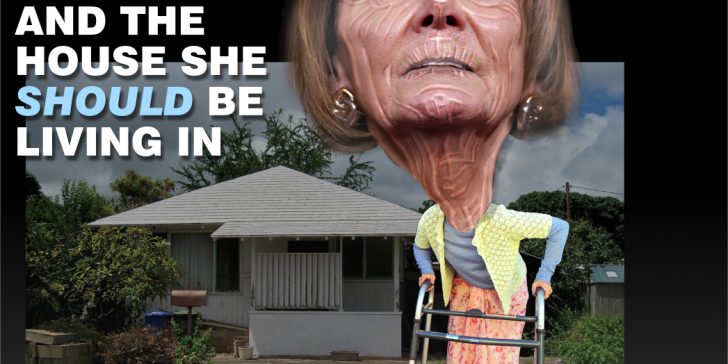 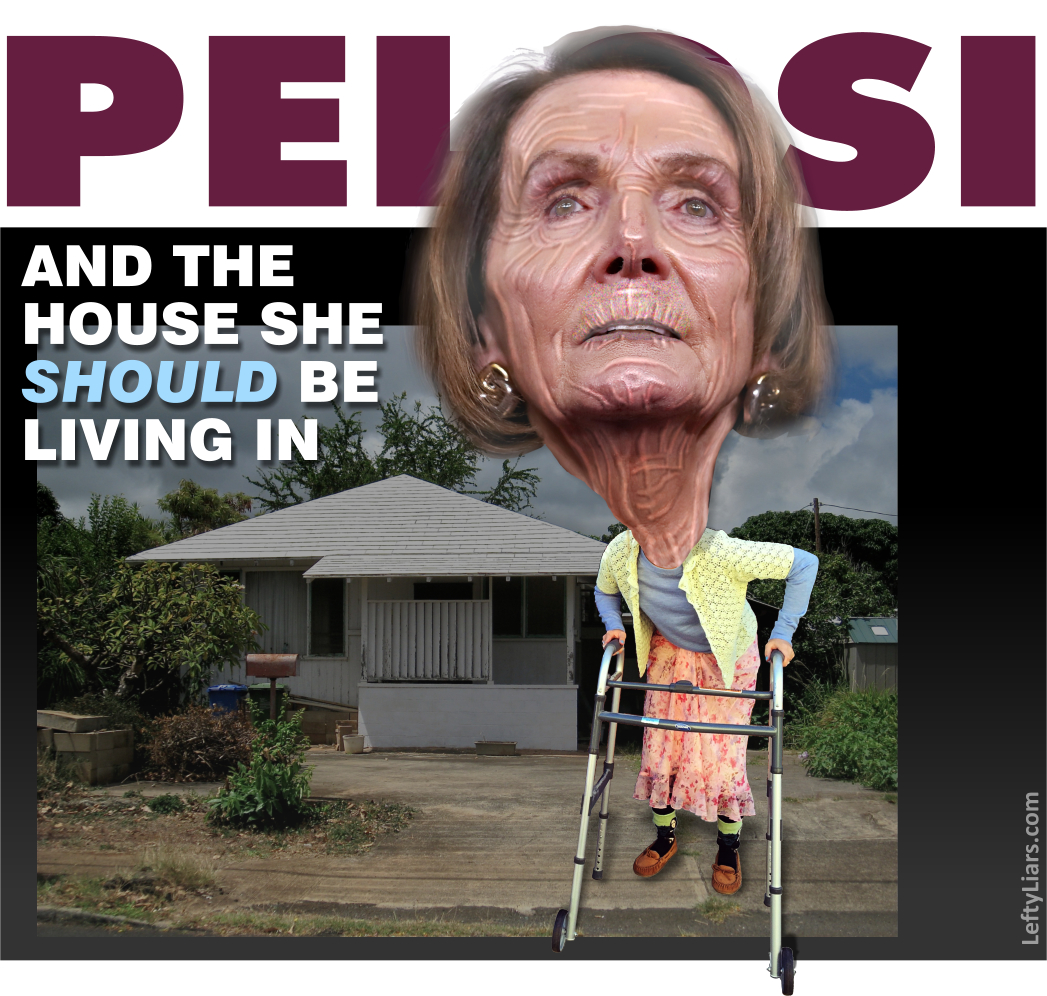 According to President Donald Trump, seventy-nine-year-old Nancy Pelosi is disintegrating, and as usual, he is right. The woman can barely talk legibly nowadays. Fake News keep this from the public as Pravda did when Soviet leaders began to deteriorate. Sources believe she conceals her wrinkles with facelifts and thick makeup while puffing her lips up with Botox. All that, combined with wigs, mascara, shiny red lip gloss, eye surgery, and colored contact lenses, makes her appear more like sixty-nine from a distance, they say. Some think she is five feet five inches tall, but taking aging and bone deterioration into account, we guess she is closer to five feet and wears four-inch heels to compensate. The picture above attempted to remove some of those fake devices, though the gaudy earrings and hair dye were left for Nancy’s dignity. Her real hair would be white and far thinner than what is displayed.

Nancy’s bloodline (paternal grandparents and mother) was from Southern Italy. Here are some 75-year-old women from that area, four years younger than Pelosi:

Now that you have a bearing on what Pelosi would probably look like minus all the fakery, what kind of a dwelling would such a person normally live in, considering both her intellect and family tree? Nancy subscribes to the nonsense her Party supports, like opposing a wall designed to stop illegal immigrants and drugs pouring into the USA. She defends those currently invading the United States and believes Donald Trump is harming America. That places her low on the ‘politically savvy’ scale; on about the same level as a Russian babushka. For a location, we can look at Montenerodomo, Abruzzo, South Italy, where her paternal grandparents were born. This joint is where Pelosi should be, standing outside like a miserable babushka, talking gibberish at strangers.

Alas, Pelosi did not grow up in Southern Italy. Instead, she found herself in the United States, with a Democrat Congress-critter for a father. Once Pelosi obtained her B.A. (Brainwashing Award), the socialist was off to stifle American business and has been for more than four decades. Now that Pelosi is finally reaching the end of her political career, honest Donald Trump, who says it like it is, commented that she is disintegrating.

Daniel Dale: President Donald Trump baselessly questioned the mental soundness of the Democrat who leads the House of Representatives, alleging Thursday with no apparent evidence that Speaker Nancy Pelosi has suffered an intellectual decline that has left her unable to comprehend his revised NAFTA deal with Canada and Mexico.

Where does Dale get the idea that Trump had no evidence? Trump spoke calmly to Democrats on Wednesday, telling them why a meeting would have to wait, and Pelosi described this later as him shouting and being hysterical. According to many witnesses, Pelosi made up that ridiculous story. Trump said, “I tell you what: I’ve been watching her, and I have been watching her for a long period of time. She’s not the same person. She’s lost it.”
He said this after careful and direct observation over time. That is the evidence Dale says Trump does not have, and it is called ‘observing and thinking.’ According to Daniel Dale’s logic, a man cannot make observations without some third party’s help.
Imagine Dale was walking his dog behind a woman walking her dog, which stopped to spend a penny on the sidewalk. Let us say its owner strolled on without collecting the waste before Dale shouted, “Ma’am, you need to bag that stuff!”
“What stuff?” the woman might ask.
“Just there, of course,” Dale would reply, pointing to the huge piece of hemp rope.
“My dog didn’t do that!” the woman could declare, turning to walk away.
“Oh yes, it did,” Dale would surely insist. “Your mutt pinched a pipin’ hot loaf right there, in front of me – I’m a witness!”
“Where’s your evidence?” the dog owner might demand.
“I told you,” Dale would groan. “I saw your dog take a dump right there. My observation and that hefty turd are the evidence!”
Dale believes his observations are rightfully qualified evidence but does not allow the same right for the President of the United States of America. No, the United States Armed Forces commander-in-chief cannot possibly employ observations as evidence because, after all, Dale does not vote for him. Well, there it is, as Emperor Joseph II said, in Amadeus.

Daniel Dale:  Trump has himself faced accusations of mental unfitness, including from Pelosi. He has shown a fondness for hurling at his opponents the same insults he has received.

Does Trump quiver, shake, stutter, repeatedly blink, bite, or suck his lips and stare like a vampire caught in the headlights? Does he describe calm speakers as angry shouters and spend a fortune trying to make himself look like someone else? Pelosi is a walking makeup shop, and her surgeries would make Frankenstein’s monster jealous. The woman is a multimillionaire about to be wheeled away to an aged facility, yet Dale thinks she is somehow a damsel in distress needing his protection, a knight in armor protecting her, perhaps. The problem is that, with arguments like that, Dale, you will lose your arms and legs.

So who is this knucklehead, Daniel Dale? 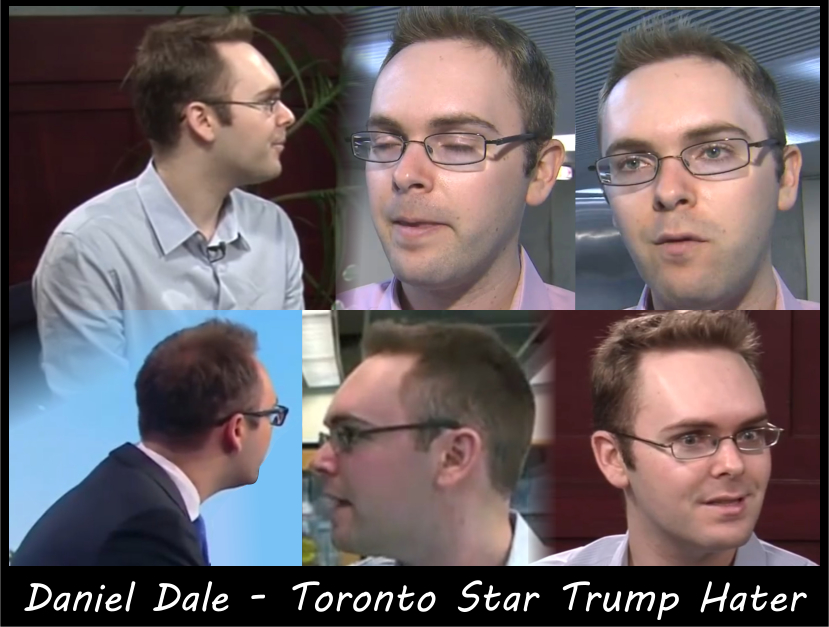 Dale is the Washington Correspondent for Canada’s Toronto Star. He trolls Trump regularly and prides himself on being a Trump fact-checker, but like so many other fakers, all his so-called Trump Lies are, in fact, Fake News and mischievous editing. I have yet to find one lie Trump has told, despite the mountains of Gish Gallops created by urchins like Daniel Dale.