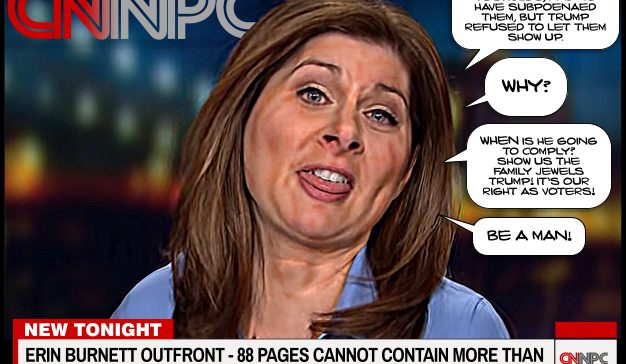 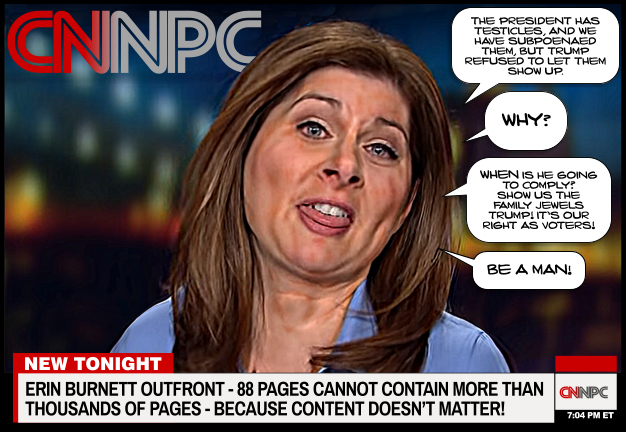 Donald Trump’s mother, Mary Anne MacLeod, was a Scottish Presbyterian, like her parents and grandparents. She married Fred Trump, an American with German Lutheran ancestry. They were both raised with the Protestant work ethic, which they handed on to Donald. His Scottish mother also taught him the importance of good manners and sobriety.

Like her President, 42-year-old Ms. Burnett learned Anglo Saxon manners. For instance, the one about nosing into people’s private affairs.

If at twelve she had asked an uncle, “What is your annual wage?” her mother would have admonished her. “Erin! Don’t ask personal questions like that – it’s very bad manners!”
Erin would have blushed.
“That’s okay, Erin,” her Uncle would laugh. “Let’s just say I make enough to pay my taxes.”
If Erin persisted, asking, “Can I see those tax returns?” her mother would probably shout, “Erin! What did I just say? Go to your room at once!”

Although Erin Burnett knows how discourteous such behavior is, she rudely bullies her President to reveal his tax returns, in front of millions, routinely. President Trump, who is under no legal obligation to do so, must be appalled by such petulant behavior.

Poor conduct is commonplace now in the media because the Left abandoned manners long ago. Their audience is made up of riff-raff collected from all corners of the earth, many of whom have no work ethic or decorum to mention. Breaking wind in elevators, belching in restaurants, scratching their genitals in job interviews, they chew gum at weddings, yawn during speeches, and boast about sex lives at the table. With no remorse, these murderbrats reminisce about masturbation on TV, tongue-kiss gay partners in the street, defecate on sidewalks, shoot children, and just about anything else you can imagine would make their grandparents turn in their graves.

The word ill-bred does not refer to genetics or breeding; it means ‘badly brought up or rude,’ and Erin Burnett is certainly rude. For about thirty years, she has known that you do not order other people to give you their private financial information. Especially not if they are in their seventies since she was taught to respect her elders. Also, most especially not if it is someone as important as the President of the United States. Imagine how dumbfounded her mother Esther would have been back in 1976 if someone told her that her newborn daughter would eventually do those things daily, in front of the entire country, on national television. Her milk would probably have turned sour and poor Erin would have had to suck a rag dipped in goat’s milk. 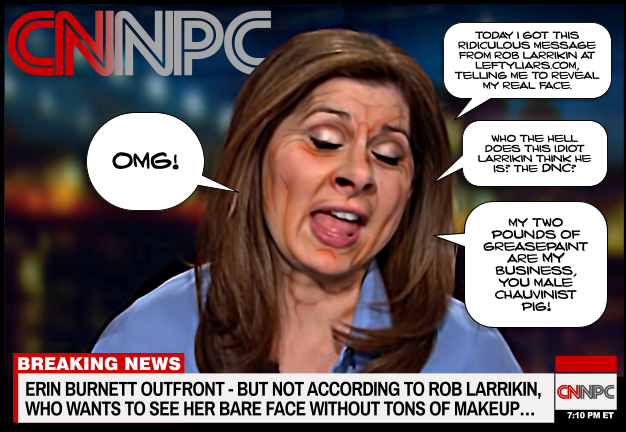 Last week (May 17), Erin was at her post on CNN nagging her President again and showering her semi-literate audience with lies and Fake News. I address her points below.

Erin Burnett:  Team Trump defying yet another subpoena from Congress, this time for six years of the President’s tax returns.

The subpoena was fake. Democrats wasted a great deal of taxpayer money on bogus conspiracies, running roughshod over Trump and his staff in an attempt to bully and hurt anyone connected with his election victory. Their desperate measures were both an attempted coup and a ploy to convince unenlightened voters that Trump was crooked. Once Mueller’s report cleared Trump, it was time to get back to work.

Erin Burnett:  Treasury Secretary Steve Mnuchin [said], “We have determined that the Committee’s request lacks a legitimate legislative purpose and the department is therefore not authorized to disclose the requested returns.”

Which is another way of saying, “The subpoena was fake.” The Democrats have been using their powers irresponsibly. A subpoena is a subpoena when adults send them for adult reasons. When monkeys begin sending them for monkey reasons, you can and should ignore them.

Erin Burnett:  Neal respended… responding to that, that he’s going to talk to his lawyers. In other words, this is headed to the courts and a possible constitutional crisis.

It probably will not go to court because there is no law requiring the POTUS to reveal his tax returns.

Erin Burnett: So… they’re going to take it to the courts, and the President has argued, of course, that the documents he released yesterday, his financial disclosure statement, this [holds up papers], is even better than releasing his taxes.

Trump Video:  I did do a filing of over a hundred pages. You get far more from that than you could ever get from a tax return.

Erin Burnett:  That’s what he says about this document [holds up pages], which is simply not true. This is the document from yesterday. This is last year’s financial disclosure form. How can you get more from this, which is 88 pages from last year, from the President’s disclosure than you would get from that? [shows a picture on Trump sitting next to a tall pile of papers]. That’s a picture Trump himself tweeted of himself signing his 2015 tax returns.

Like many Lefties, Erin Burnett believes in quantity, not quality. She is like one of those board hogs posting 100,000 posts full of hot air and blather, who sneers, “What could you possibly know with a post count of only 2000?”
Nobody taught her that a single honest line of writing is worth far more than a billion paragraphs of lying propaganda. Trump’s 88-page summary has way more useful information in it than thousands of droll tax pages. Democrats did not bother to look at Mueller’s report when available, so it is clear they would ignore the tax papers were they available. 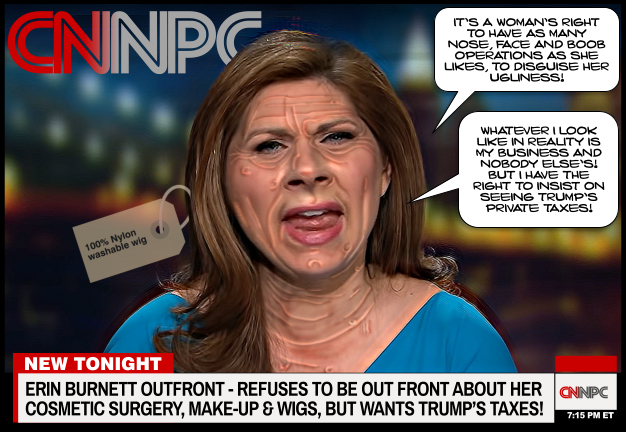 Erin Burnett:  So that’s how much information could be available from one year without a measly little 88 pages, which do not answer the big questions of who paid the President money, exactly how much money the President owes and to whom.

As your mother might have told you thirty years ago, mind your own business. What are your qualifications to interrogate Presidents about their taxes? A Bachelor of Arts degree from a liberal arts college? Or is it that you work for CNN, often described as the enemy of the people? If you demand private tax papers, how long will it be before you insist on details about a President’s testicles, or the length of his penis? If bad manners are okay with you, we can do the same. How about you reveal yourself minus cosmetic surgery, nose jobs, makeup, eyelashes, mascara, lipstick, rouge, eyeliner, eyebrow color, nails, dyed hair, wigs, hair extensions, and any other body modifications including liposuction, Botox, and silicone breast implants? What kind of a big-nosed hag is in your DNA?

Erin Burnett:  But the President and his team have another excuse for not complying with the subpoena. Listen to this one:

Sarah Sanders Video:  I don’t think Congress, particularly not this group of congressmen and women are smart enough to look through the thousands of pages that I would assume that President Trump’s taxes will be.

Erin Burnett:  Well, she’s right. It’s not 88 pages, but calling someone stupid doesn’t generally work. Not even in kindergarten.

Saying someone is ‘not smart enough’ is not ‘calling someone stupid.’ Not even in kindergarten. You should have learned that in grade five, Erin, but I guess your feminazi teacher was too busy teaching you how to hug trees. FYI:

If tested today, the average politician is probably not smart enough to understand brain surgery, nuclear physics, rocket science, quantum mechanics, evolutionary developmental biology, clinical psychology, or aerodynamic potential flow codes. Does that mean they are stupid? No. You can be quite smart in many areas, but that does not qualify you to be smart enough to understand others. No, Democratic congress critters, who barely understand ‘presumption of innocence,’ will never understand complicated tax paperwork by any stretch of the imagination.

Erin Burnett:  So will we ever see the President’s tax returns? Well, not if Trump has anything to do with it, meaning all of this was not true:

Trump Vid May 2014:  If I decide to run for office I’ll produce my tax returns, absolutely.

Trump Vid April 2011:  Maybe I’m going to do the tax returns when Obama does his birth certificate.

Trump Vid May 2016:  I would love to give the tax returns, but I can’t do it until I’m finished with the audit.

No, Erin, all of that was true. In April 2011, five years and seven months before Trump was elected, he said maybe he would provide them. Do you understand what ‘maybe’ means? In May 2014, two and a half years before being elected, Trump said they would be produced, but he did not know then that they would be under audit on election day. In May 2016, six months before Trump was elected, he said he would love to, but not until the inspection was done.

What is the problem? The President’s taxes are his business, not yours, Erin.

At the moment, Erin, you are stuck in CNN, peddling Fake News. You do not understand politics and probably never will. From your early days in school, you were brainwashed like millions of others to support the Left, so your world view is little more than a fairyland. If you eventually realize this, you may feel like Jefferson Hawkins, who spent about 35 years in Scientology before escaping. As he said in Louis Theroux’s My Scientology Movie, it was difficult to break away because it meant losing various friends and family.

Here are some pennies from Heaven for you. Save many years by waking up now. Leave your job and either find another, away from left-winged politics or stay at home and raise your children.

Some Lefties leave this too late and end up trapped in the fake world they have created, unable to exit. Though they will not admit it, you can spot them. Look for once loud and vocal Lefties who now say little. They will nod, weakly, when others attack Trump, but change the subject or leave the room soon afterward to avoid further commentary.