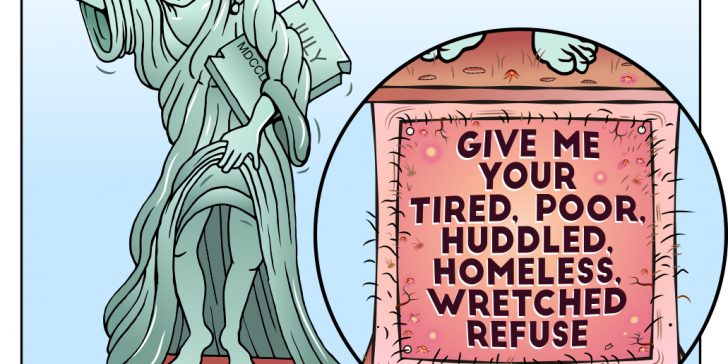 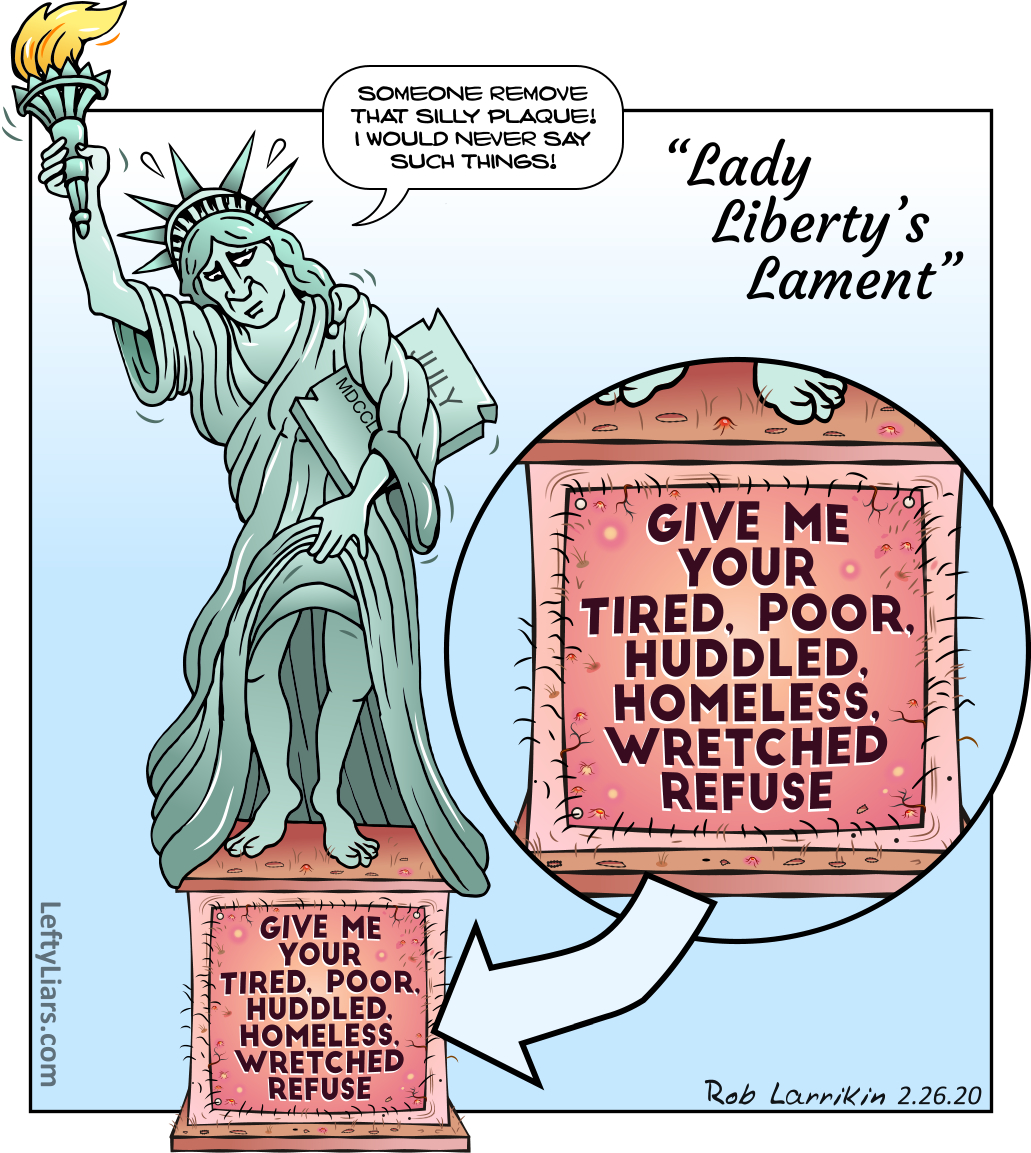 Millions of Americans are asking, “What happened to our country?” It is supposed to be the land of the free, so why is half the population supporting Socialism, anarchy, and chaos? Just one lifetime ago, the average US citizen supported Truth, Justice, and the American Way. Now a large percentage want to ban police, free prisoners, delete borders, import criminals, and turn America into the United Soviet States of America.

It is no surprise when you consider Fake News has been working on that outcome for the last two centuries. What may be a surprise is how the Left used America’s top icon of liberty to achieve much of this.

The Statue of Liberty (‘Liberty Enlightening the World’) had little to do with inviting poor and desolate people to the United States. Its designer was French sculptor Frédéric Auguste Bartholdi, who wanted to honor the centennial of American independence. The statue is a figure of Libertas, the Roman goddess of liberty.

Bartholdi, the sculptor, was inspired by his friend, Édouard René de Laboulaye, who wanted to present a statue representing liberty as a gift to the United States. Édouard was a zealous advocate of the Union cause and the abolition of slavery. The giant goddess would hold a tablet with the date of the US Declaration of Independence inscribed on it in Roman numerals (JULY IV MDCCLXXVI – July 4, 1776).

These two men dreamt up and designed the gigantic idol in the name of freedom and the elimination of slavery. Neither man had any wish to import poor, desolate, or huddled masses of ‘refuse’ into the United States. Their incentive to create the statue was to celebrate American liberty.

Bartholdi and Laboulaye had no idea that once their colossal sculpture stood in New York Harbor, a mischievous Leftist message would be placed in its base, to hijack the whole meaning of the great gift from France to the United States. Fake News would advertise that message for all time since, falsely promoting it as the meaning of the statue.

Who was responsible for this crime against liberty, for fixing a political tablet to the statue’s base in 1903, touting a kooky poet’s invitation to the world’s wretched refuse?

Give me your tired, your poor,
Your huddled masses yearning to breathe free,
The wretched refuse of your teeming shore.
Send these, the homeless, tempest-tost to me,
I lift my lamp beside the golden door!

Who wants wretched, tempest-tost, homeless refuse? Not Indians, nor Dutch, nor Christopher Columbus. Definitely not Pilgrims, nor the Founding Fathers, nor even Abraham Lincoln. No great Americans, including Benjamin Franklin, Thomas Edison, or Andrew Carnegie, were interested in importing homeless refuse into the United States. 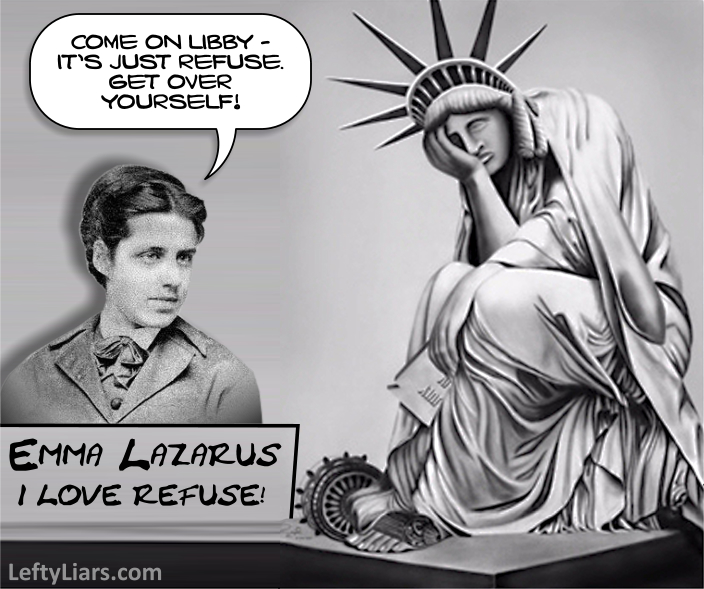 By that description, can you imagine her being anything but left-winged?

Emma Lazarus was a friend and admirer of the American political economist Henry George. She believed deeply in Georgist economic reforms and became active in the “single tax” movement for land value tax.

Henry George believed that all the rent earned from property should be confiscated and shared by everyone. He reckoned that water, electricity, sewage, and telecommunications should be free for all, which is just another version of socialism, albeit a different flavor.

Henry George did not understand that when people legally purchase land, it separates them from tribes who take property by force whenever it pleases them, creating anarchy, war, and carnage. Legal deeds prevent disputes over land, so people can conduct business without having to worry about murder and mayhem.

Title-owners do not own property forever since all people die, after which property is willed to others, sold, or taken by the government. It is an orderly process that ensures justice and peace for most people most of the time. Also, “free” water, electricity, gas, telephones, and sewage do not exist. When given away “free,” they have to be paid for by somebody, and that somebody is nearly always businesspeople. When you tax business this way, companies put prices up and lay off workers. The result is rising inflation, a falling dollar, a collapsing stock market, growing unemployment, increased crime, mortgage foreclosures, bankruptcy, recession, and soup kitchens on every street corner.

What do we have here? A left-winged poet believed America should invite tired, poor, huddled, homeless, tempest-tost wretched refuse, and some fool decided to attach that invitation to the Statue of Liberty! Who would do such a thing? Why, one of the poet’s friends of course – Miss Georgina Schuyler – a spinster who supported the many social reform programs established by her spinster sister, Louisa Lee Schuyler. These two sisters lived in a house together into old age: no husbands, no children, and no idea how State welfare erodes wealth.

As I have pointed out, spending taxpayer funds on welfare only creates more poverty. Private charity can take care of whatever poverty exists, but when government welfare comes along, encouraged by welfare advocates, that poverty increases a thousandfold. The solution to poverty is to end state welfare and give liberty to entrepreneurs; the very liberty the Statue of Liberty was supposed to represent!

Lady Liberty was not about welfare or illegal immigrants, yet that is how left-winged social workers made it appear. To this day, Lefties point to her as ‘proof’ that letting illegal, bankrupt, criminal immigrants into the USA is a great cause! 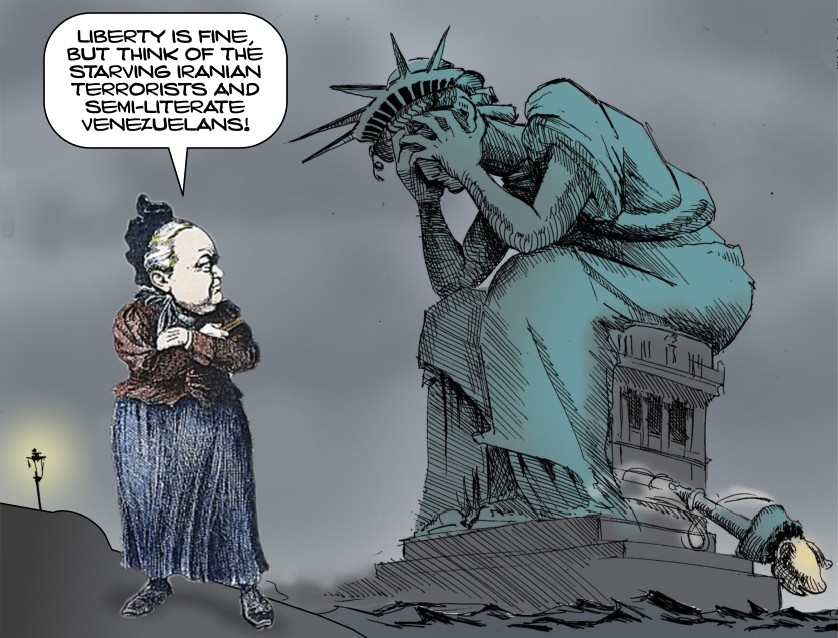