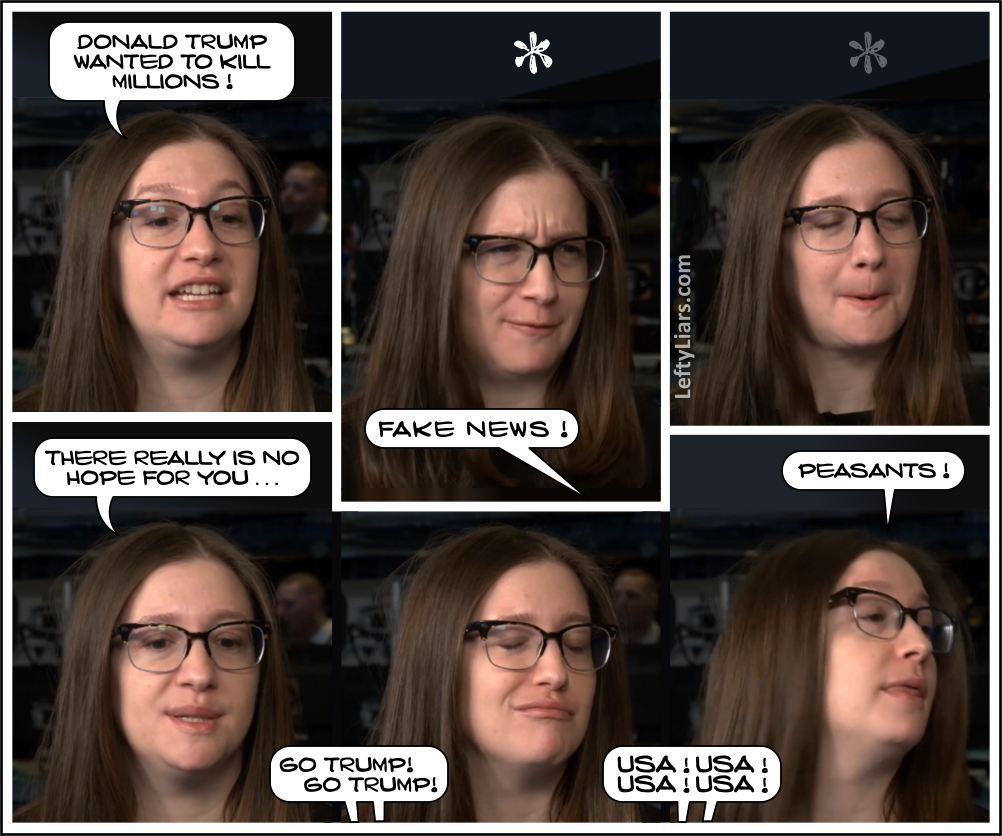 Impish Bess Levin is up to her shenanigans again, lying about Donald Trump and Matt Gaetz. I wrote about Levin in 2018 after randomly plucking a nothingburger off the web to show how Fake News mischievously changes information. Levin, whose head was stuffed with college propaganda, seemed like an innocent-enough dolt at the time. Others began to notice her penchant for lying about President Trump, describing her as an unhinged mental midget, a gossip, and an angry, far-left activist posing as a writer.

As if these criticisms encouraged Levin, she has since turned into a full-blown neander-troll, recklessly bashing Republicans with a lie-encrusted club. The walking, talking Democrat Placard still writes propaganda for Vanity Fair, the same Fake News magazine that publishes arrogant miscreants like Brian Stelter.

I will answer one of Levin’s latest rants about Matt Gaetz below, starting with its title [emphasis mine]:

REPORT: MATT GAETZ PERMANENTLY SEWED HIS LIPS TO TRUMP’S ASS FOR NOTHING.

Levin calls her rant a report. According to Merriam-Webster, a report can be common talk, a detailed account, a judicial opinion, a formal record, or an explosive noise. I guess Levin’s effort is the last one, though, for an explosion, I heard nothing over the omnipresent roar of Fake News.

The Florida Congressman branded himself Donald Trump’s biggest defender. The ex-president has not returned the favor.

Gaetz never pretended to outdo Donald’s family in defending him, nor the hundreds of millions of Trump supporters globally. As for Trump not returning the favor, Levin made that up too. How much does she know about their private relationship—enough to fill a thimble, perhaps? If Trump rewarded Gaetz extravagantly, would he call Bess to provide her the particulars? Maybe Bess thinks she is Bess Guess – the newest feminazi Marvel comic hero, able to womansplain everything that goes on in Trump’s life accurately, with her special powers of Bess Guessing.

One of the saddest subplots of the drama surrounding the Justice Department investigation of Matt Gaetz for allegedly paying women for sex and, separately, sleeping with a minor and transporting her across state lines…

“Justice Department” is an Orwellian oxymoron since Democrats control it. The amount of justice there equals the quantity of truth found in 1984’s Ministry of Truth. Democrats are up to their armpits in manufactured sexual accusations, which few people take seriously nowadays.

…is the one in which it appears the Florida congressman spent four-plus years kissing Donald Trump’s ass for nothing.

According to Bess Levin, being loyal to someone you support means kissing their anus. Thus by her admission, Bess spent decades kissing her family’s anuses and going by her headline, her lips were permanently sewed to her boss’s anus for some years. 48-year-old Radhika Jones, the editor-in-chief of Vanity Fair, must be tired of dragging Levin around by the ass for so long.

If Donald Trump helped Gaetz by giving him great advice and putting him onto some excellent legal scholars, and helping him financially, would he tell Bess or any other far-left Fake News outlet? Never. Yet Bess pretends to know that Trump gave Gaetz no help. Bess Guess to the rescue!

… and (2) when did he [sic] go on the record, it was with an extremely underwhelming statement noting that Gaetz has denied all the allegations against him and saying that the congressman had never personally asked him for an anticipatory pardon.

Since Trump saying the opposite would be an overwhelming news event for Fake News, it stands to reason that Trump’s normal and just statement would be underwhelming to anti-Trump goblins.

According to The New York Times, Gaetz asked the White House for “blanket preemptive pardons for himself and unidentified congressional allies for any crimes they may have committed,” according to two people familiar with the discussions. 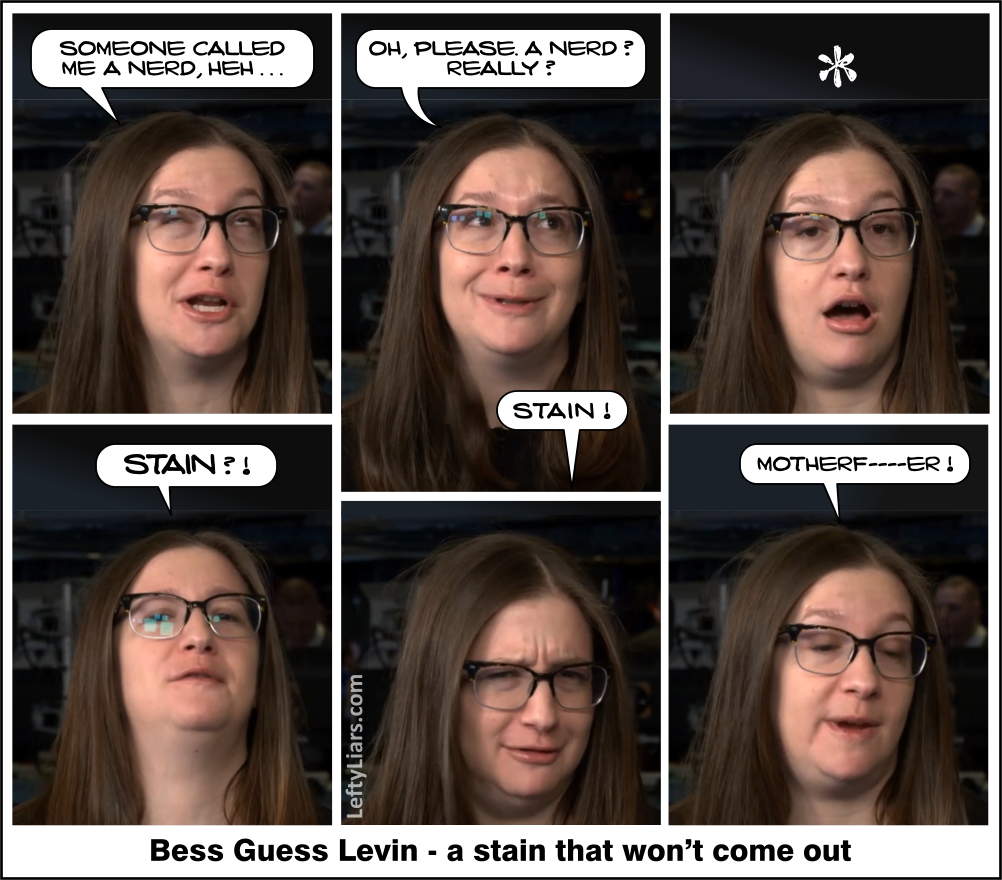 Obviously, this would be nothing to write home about if Trump were the type of person to refrain from wading into controversy,

Donald Trump has no choice about “controversy” since his every word, action, deed, and joke is examined, analyzed, prodded, surgically altered, exaggerated, published, promoted, debated about, lied about, and advertised as a controversy by MUDSHIP, who are then celebrated and rewarded by PANGEGM for that manufactured controversy. If Trump says, “Hello,” to his wife, Bess Levin will find it controversial.

or if he had a history of condemning accused sex offenders, which of course he does not.

It would be wrong for anyone (other than an accuser) to condemn an innocent man or woman. In America and other Western nations, a person enjoys the Presumption Of Innocence, holding that a defendant is innocent until proven guilty. It is great that Trump adheres to one of the most sacred principles in the American criminal justice system, even if that is bad and controversial to Bess Guess Levin.

Instead, he’s been known to speak glowingly about notorious sexual predators like Roger Ailes, whom he called “the greatest” long after Fox News’ parent company paid tens of millions in settlements related to sexual-harassment allegations against the former CEO.

Conservative hero Roger Ailes sacked liberal “me too” feminist Gretchen Carlson from Fox News in June 2016. Shortly after, Gretchen vengefully accused Ailes of “sexual harassment,” a charge he vehemently denied. Gretchen was joined by several of her feminist buddies, including Megyn Kelly, in a tar-and-feather man-bashing exercise designed to get Ailes fired – something MUDSHIP had been attempting for years. In doing this, Gretchen and Megyn broke their confidentiality agreements stipulating that any disputes should first go into arbitration. The matter was never adjudicated in court, and as such, Ailes remains innocent of all charges, by law. The Murdochs, who dislike bad publicity, persuaded Ailes to resign and paid Gretchen money to prevent an expensive, drawn-out court battle. Gretchen was more interested in money than in “justice.” Megyn Kelly did not last long after knifing her boss, Ailes, and annoying the Murdochs. When her contract expired a few months later, it was not renewed, which means they effectively fired her ass.

Lefties use every dirty trick on the menu to besmirch anyone connected to Donald Trump, and their favorite foul play meal by far is a box of old tarts happy to lie about sexual impropriety. Trump’s defense of victims made little difference against the Fake News tsunami, so his strategy these days is to make short, relevant statements and exit. Of course, this exasperates trolls like Bess Guess Levin. Trump’s real assistance is all behind the scenes, as it should be under the circumstances.

In a stomach-turning passage from his book, Firebrand: Dispatches from the Front Lines of the MAGA Revolution, Gaetz wrote, “The president has called me when I was in my car, asleep in the middle of the night on my Longworth Office cot, on the throne, on airplanes, in nightclubs, and even in the throes of passion (yes, I answered).”
None of which paints a picture of a guy who would find himself within miles of Trump and not request a meeting in the hopes of posting a photo to Twitter with a caption à la “Great conversation with President Trump!

Bess Guess left out six sentences after that passage. They show that, with the frequency of Donald’s calls, Gaetz did not need to call. The Donald would naturally contact him. Here are the lines that Bess Guess snipped:

Not to mention Christmas Day. Often but not exclusively at night. The president keeps odd hours. Now, so do I. He has called me elated, tired, cursing, curious, screaming, and once when I was saying farewell to one of my constituents at Arlington. He swears at me with the enthusiasm of a New York construction worker…

And again, Fake News not reporting Trump helping Gaetz in no way means Trump’s help was absent. Bess Guess must learn that Trump and Gaetz have no desire to have all their private affairs known to far-left extremists like her or Radhika Jones, whose ass must really be aching by now.

Like so many of her Fake News colleagues, it appears Bess Levin learned virtually nothing about American or European history in school. Her teachers must have been too busy teaching kids how to become gay, green, feminist, racist, socialist Democrats. They did a great job cramming Bess Guess’s head with far-left hogwash. Tomorrow, she will don her spandex costume, leap out the window and fly into another rage against Republicans.

Voiceover: Faster than a speeding pulpit. More powerful than irrational motive. Able to leap tall conclusions in a single bound.

Utilizing her special powers of Bess Guessing, she will femsplain why Trump continues to be ebil, all the while keeping wads of wax in her ears to block out unwelcome words of reason. After collecting a carton of myths and misinformation, the Gish Galloping fembot will whip up more Vanity Fair articles, bursting with lies, guesses, mistakes, and misinterpretations.