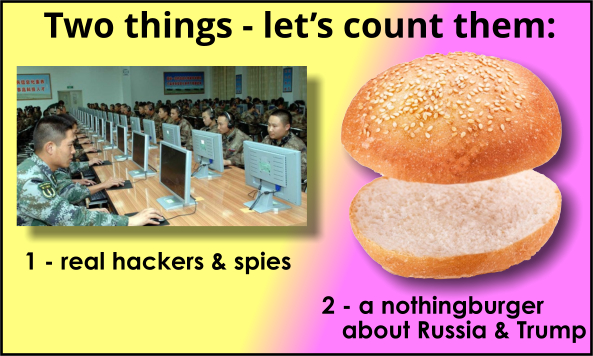 There was always interference in American elections by many overseas nations. China, Russia, North Korea, and various other enemies have their spies, agents, moles, and organizations, gathering information and helping Democrats win. It has been going on since the Cold War and before, so, for many decades. That is a given.

The Russian conspiracy, cooked up by the Democrats and Fake News, is a different kettle of fish. It is a nothingburger, as CNN’s Van Jones and John Bonifield explained. The idea was to convince voters that somehow Trump and his team were colluding with Russia and Putin to defeat Hillary and give Trump the White House. It was a nothingburger; a conspiracy; a myth – two different things:

Lefties should practice this over and over; One, two. One, two.

One, two. One, two. Two different things and Trump talks about both.

PolitiFake and Fake News like to pretend there is no nothingburger. They mischievously make-believe that when Trump talks about one and two, he’s actually only talking about one. Using this rascally schoolyard trick, Angie Drobnic, editor of Politifacts.com (PolitiFake I call them), toe-nailed (backup here) their “2017 Lie of the Year”, to Trump, December 12th, 2017.

Drobnic cited an example of Trump talking about real Russian interference and then quoted him saying that the nothingburger is Fake News, and concluded that this was a contradiction. “First he says it exists, then he says it doesn’t exist,” that sort of thing. Bullies did this in primary school, remember?

Scene: As kids arrive at school in the morning, a bully, Sally, approaches her victim, Mary.

The bully uses a False Dichotomy logical fallacy by oversimplifying the range of options. She tells Mary, “If you don’t want to eat lunch in the morning, you don’t want to eat it at lunchtime,” whereas Mary did want to eat it at lunchtime. According to Angie Drobnic, if you agree that Russians and other nations interfere in U.S. politics, you must also accept that Trump and his team were colluding with Russia. It’s a common logical fallacy known as the Black & White fallacy, Either-Or fallacy, or Bifurcation fallacy, and every schoolyard bully uses it.

Another PolitiFake reporter, Jon Greenberg, used the same approach to bash (backup here) Trump with a “Pants-on-Fire” accusation. Greenberg pretends that when Trump talks about Russian meddling and the nothingburger (two separate subjects), he is only really talking about one, and concludes that this is a contraction, making Trump a pants-on-fire liar. He even provides a link to Angie Drobnic’s article.

Who are these two kangaroo court, logical fallacy junkies? 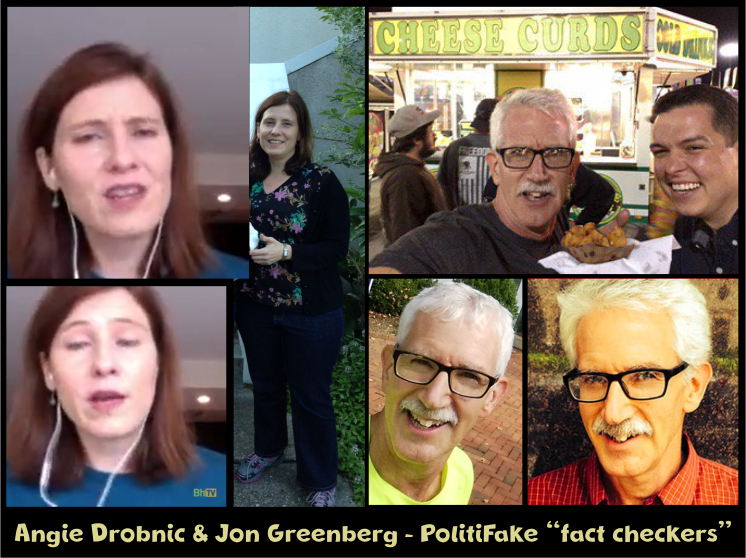 Jon Greenberg worked for National Public Radio and now PolitiFake, and Drobnic is his editor. Some critics online say she is a biased partisan hack. See examples here, here, here, and an article about how much she used to drink and sleep under a desk here. Born in Venezuela to Yugoslavian parents, Drobnic wants to import the same communism her parents escaped.