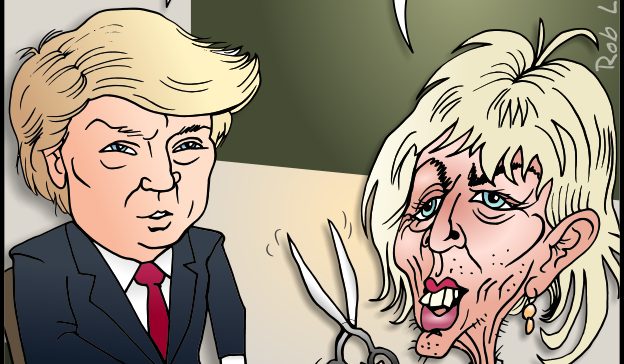 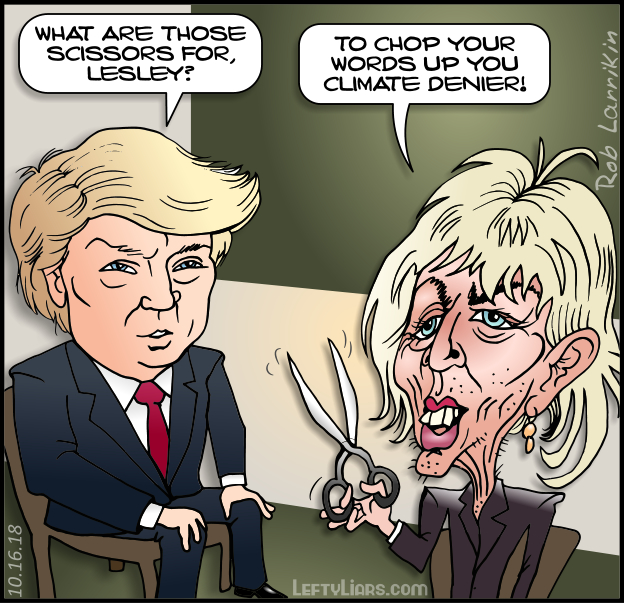 60 Minutes aired an interview between Lesley Stahl and Donald Trump on Sunday, October 14, 2018. It was undeniably cut many times. I believe many things Trump said were ‘left on the cutting room floor,’ to use an old expression from the days of celluloid film cinematography. In the film industry, such editing happened for artistic reasons. When it comes to Fake News, such editing occurs for political reasons. Click here (backup here) to see the interview.

Watching Lesley Stahl ask Donald Trump questions was like watching a silly child annoying her patient grandfather. Stahl is a typical Lefty, with all the usual programming well in place. She believes her false man-made global warming religion like a faithful zealot and marks her territory in this regard like a dog lifting its leg against a post. Her thinly veiled hatred of Trump and whiny virtual signaling make for a pathetic spectacle, matched only by the feminazi’s woeful lack of real-world knowledge. The hag peddles her baloney like a carnival barker, with lipstick and a wig. To send a fool like her to interview Trump was an insult, not just for today’s TV audiences, but for historians of the future. She is living proof that hippies are a pin-headed tribe of deadbeats nobody will miss.

I provide below about 5.5% of the transcript for the interview. It was the first subject covered – that of Climate Change – and ends at the 2:48 mark in the video.

The black text represents what 60 Minutes let us hear. The red represents the kind of words I predict they removed. I base this prediction on my understanding of how Trump thinks and speaks, his style, and the subjects he has covered before. The red text is fictional but in my opinion, close to the truth. I think 60 Minutes used a metaphorical meat-cleaver to butcher the interview, hacking out only snippets of what Trump said and stitching them together to create a different impression. I have no doubt they deleted the best parts. One of Donald Trump’s virtues is that he rarely snitches on journalists who do this. He takes it on the chin, and Fake News takes advantage of those good manners.

How to see cuts

For those not sure about the edits, remember the golden rule. If a journalist can “catch” Trump out in any way, they would never cut the vision while presenting it. Yet you will notice many cuts in this video below. If one knows how Trump talks in interviews, one notices when he answers a different way.

I think that even the first question has a cut. We see Donald Trump sitting there, and Stahl asks, “Do you still think that climate change is a hoax?”
Had Trump answered in a way they liked, they would have undoubtedly left the vision untouched to prove his answer was uncensored or manipulated. In my opinion, Trump must have said something they didn’t like, so they removed the first part of his reply. To do that, the editor begins with Donald sitting there while Stahl commences her question, then cuts to her face while she finishes, before cutting back to Trump, who says, “Look, I think something’s happening…”
In reality, Trump may have said five sentences or fifty before saying, “Look, I think something’s happening.”
We will never know.

It is clear there are many cuts like this throughout the interview, which makes it what they call in the industry a “hatchet job.” It is as if the editor took a hatchet to the footage, leaving only slivers of it for us to watch.
Once again, I did my best to restore what I believe they removed. I say ‘fixed,’ but it is only guesswork. When you read the red text, you may find it sounds similar to Trump and is the kind of material Fake News would want to remove. See if you agree.

Lesley Stahl: Do you still think that climate change is a hoax?

Donald Trump: [CUT] Climate changes; we all know that. Whoever said it doesn’t?

Trump: Don’t you remember learning as kids in school about the ice age and other climate changes?

Stahl: …climate change, as in global warming and the…

Trump: Sure, climate changes. That’s not the problem. Whether people change the climate, well, that’s another thing. No, I don’t believe we do, and again, many…

Stahl: So you don’t think something is happening, changing, as a result of human industry? [/CUT]

Trump: Look, I think something’s happening. Something’s changing, and it’ll change back again. [CUT] It’s just typical climate that has always gone up and down, and altered, since like, forever.

Stahl: During your presidential debate with Clinton, she said you think that climate change is a hoax perpetrated by the Chinese.

Trump: Yeah, but she was wrong. What I said was that the idea of global warming was created by the Chinese to make U.S. manufacturing non-competitive, that’s what I said.

Stahl: Okay, so you do think climate change is a hoax? [/CUT]

Trump: I don’t think it’s a hoax; I think there’s probably a difference. But I don’t know that it’s man-made. [CUT] I don’t want to give trillions of dollars to…

Stahl: The world’s scientists say climate change is causing all kinds of catastrophes, including this latest Hurricane Michael, and there are similar problems all around the world, and you don’t want America to help pay anything to help with… [/CUT]

Stahl: I don’t think it would take trillions…

Trump: Not the polar bears again. That was just an old wives’ tale. Lesley, the polar bears are fine. In fact, they are overpopulating some places and causing problems. It’s just Fake News. [/CUT]

Stahl: I wish you could go to Greenland, watch these huge chunks of ice just falling into the ocean, raising the sea levels.[CUT]

Trump: You don’t know that human industry causes it. There are plenty of scientists who say it is perfectly natural. And you don’t know that temperatures wouldn’t go up and down as they have been for millions of years, long before man was around.

Stahl: But the sea levels are rising by…

Trump: I don’t think they are. If they are, we’re only talking tiny amounts that make no real difference. Why would Al Gore have a mansion by the sea if it’s going up in any meaningful way? Sea levels go up and down by a few millimeters over the centuries, for entirely natural reasons…[/CUT]…and… you don’t know whether or not that would have happened with or without mankind. You don’t know.

Stahl: At NOAA and NASA —

Stahl: You know, I — I was thinking what if he said, “No, I’ve seen the hurricane situations, I’ve changed my mind. There really is climate change.” And I thought, “Wow, what an impact. What an impact that would make.”

Stahl: But that’s denying it.

Trump:  –of years. They say that we had hurricanes that were far worse than what we just had with Michael.

Stahl: Yeah, but what about the scientists who say it’s worse than ever? [CUT]

Stahl: But most scientists in the world agree with climate change about…

Trump: Yeah, but as I say, many of them have a political agenda and, many of them are funded by governments and, if they tell the truth, they have their funding withdrawn. I get letters from them all the time complaining about it. They have to agree, or they lose their jobs. Many did lose their jobs when they spoke up. There are thousands of them out…

Stahl: I haven’t seen any. Where are they?

Stahl: Yes, I supported the Paris agreement because…

Trump: Because you’re a climate alarmist. Sorry Lesley, but you are.

Stahl: Why would you use that word ‘alarmist’? I’m simply taking note of what scientists are saying around the world.[/CUT]

Trump: Ah, you’d have to show me the scientists because they have a very big political agenda, Lesley.

Stahl: I can’t bring them in.

You can imagine how many other edits they made during the rest of the “interview.”

How can I describe it as anything but a lie? It presents a false impression of what Trump is and what his arguments are.

Two months later, Elon Musk complained that the same person, Lesley Stahl, left critical snippets of his 60 Minutes interview on the cutting-room floor. After hours of interviewing him, he said that they used 14 minutes and edited the words to make him look arrogant. For instance, when asked if Musk wanted to reclaim the chairman title he gave up in September as part of a settlement with the SEC, his full answer was, “No, I don’t think. I actually just prefer to have no titles at all,” but CBS’ teaser tweet limited Musk’s reply to a simple “No.” Once again, Stahl came across like a little schoolgirl annoying an adult. That must be her ‘schtick’ as they say in the industry.