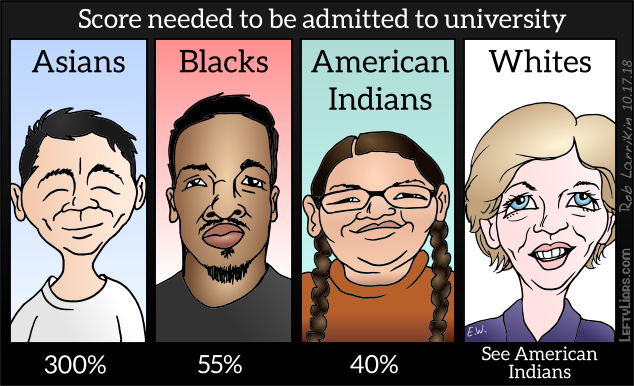 Universities back in the ’80s had been criticized for not having enough female students, and ‘students of color,’ meaning blacks and American Indians. Male whites and Asians had very high exam scores and would take up most of the positions. Female, black and Indian scores were not as high, and few would gain entry. In response to their critics, universities began to lower entry scores for select groups. If you were white or Asian, the entry score level might be 98.5%. They might reduce that to 80% for women, 75% for blacks, and 60% or 50% for Native Americans. Figures would vary from one university to the next. If you were a white person with a score of say, 78%, you would not gain entry. If you were determined to get in, you could always lie in your application form by ticking the “Native American” box. If you succeeded, you would have to try to look more Native American. You would probably die your hair black, use tanning lotion to darken your skin, and wear a hat and sunglasses.

Of course, if you did this, you would be stealing a real Native American’s chance for a position in Harvard. 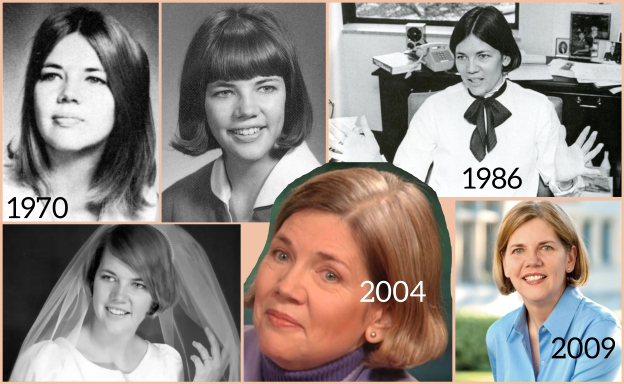 In 1986, at the age of 37, Elizabeth Ann Warren listed herself as a racial minority with AALS to be accepted into Harvard Law School. Harvard then took her as “a woman of color,” and this continued for nine years until 1995.

When Warren attacked Donald Trump during his election campaign, he responded by pointing to her deceit, and dubbed her “Pocahontas,” after the historic 17th century American Indian. Since that time Elizabeth “Pocahontas” Warren dodged the issue and refused to prove her Indian heritage by having a DNA test.

Come October 2018, and 69-year-old Elizabeth Ann Warren, the feminazi Senator from Massachusetts who hates old white men and insists she has Cherokee Indian heritage, finally agreed to do the test, but only at Harvard University.

The problem is that of all the institutions Harvard had the strongest possible motive to provide a misleading result. After all, they had been embarrassed by the Pocahontas scandal for three years and stood the most to gain if Warren had Cherokee DNA. The Justice Department had just filed court documents two months earlier, siding with a group of Asian-American students who alleged Harvard discriminated against their race in its admissions process. Harvard certainly didn’t need Warren to be exposed as being utterly devoid of Indian DNA.

So who is this Carlos D. Bustamante? 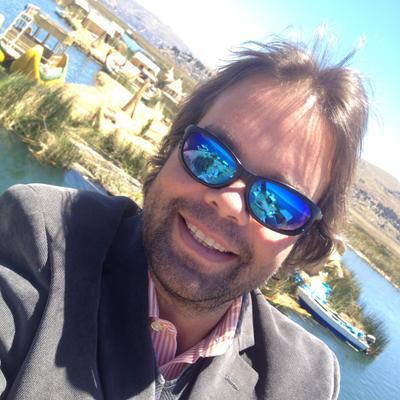 Carlos, who looks more like a young party boy than a professor, believes there is no model of ten human races, but rather, a continuum model. “If I walk from Cape Horn,” he said, “all the way to the top of Finland, every village looks like the village next to it, but at the extremes people are different.”
That may be true in landlocked places, but many nations and races are separated by water. Take these humans for instance:

Try walking from Egypt to Papua New Guinea, Sweden to Australia, or Russia to Japan, and then Scotland, Carlos. There are a variety of human races, very distinct from one another, found in many countries separated by oceans – which are hard to walk over, so good luck!

At any rate, Trump was not convinced, and would rather see the test done by anyone other than Carlos at Harvard University. Fake News began ranting that Warren was vindicated, but more honest reporters explained that the result exonerated Donald Trump, since Warren was no more Indian than the average white American. She was indeed a fake Indian.

One far-left commentator,  Juan Williams, on Fox News’s The Five, said Trump “made a promise and won’t pay off the bet!” Juan lied at the 3:50 mark of the video, saying:

What he said was, ‘If you have any Indian ancestry I will give a million bucks. That is what he asked. That’s what she did.

Let’s take a look at what Trump actually said, during his rally in Great Falls, Montana – July 5, 2018. The red part is the part about money:

We will take that little kit and say, but we have to do it gently, because we’re in the me-too generation so I have to be very gentle. And we will very gently take that kit and we will slowly toss it, hoping it doesn’t hit her and injure her arm even though it only weighs probably two ounces.

And we will say, I will give you a million dollars to your favorite charity, paid for by Trump, if you take the test so that it shows you’re an Indian. You know. And let’s see what she does. I have a feeling she will say no but we will that for the debates.

If you take the test so that it shows you’re an Indian.

The DNA test shows that Elizabeth Pocahontas Warren is a typical white person, not an Indian.

The rest of Fake News also ran this lie, that Trump had not paid his debt, and that Pocahontas had won the bet. Once again, Lefty Liars mischievously misquote Trump to provide Fake News.