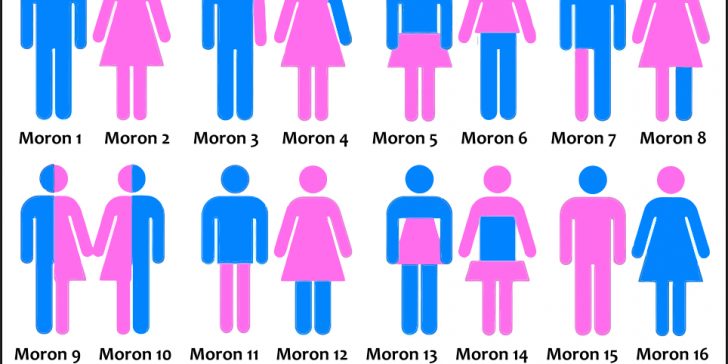 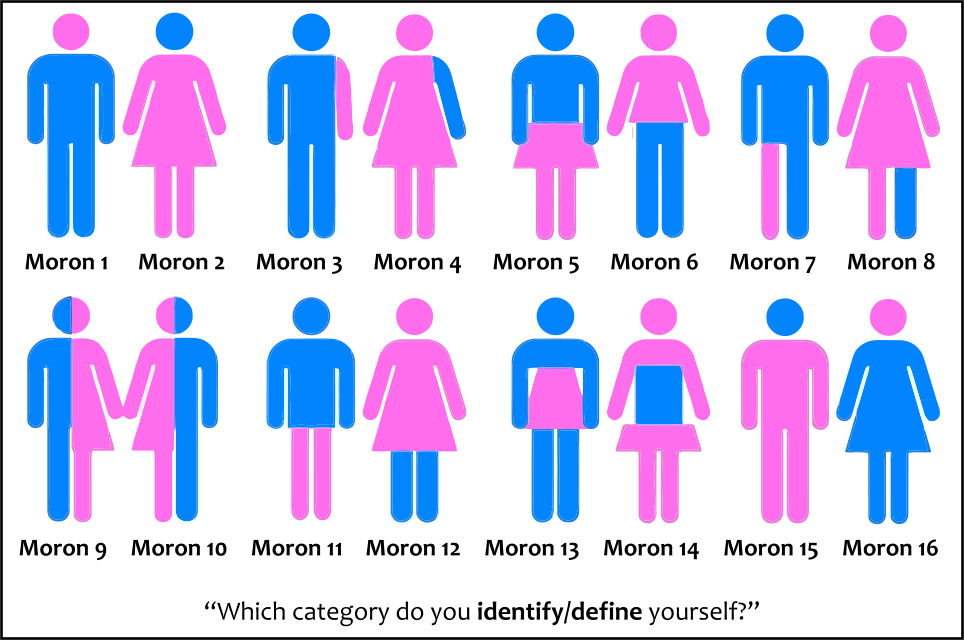 There was a time when a journalist who wrote for a major newspaper was selected purely for their writing ability. Now a significant part of the selection process depends on what is in their underpants. Feminist rule-making bureaucrats are obsessed with vaginas and penises. Employers must hire a particular number of women at any time so they can brag about being gender-equality driven, one of the more bizarre terms now in use by wild-eyed Lefties. A job applicant’s sexual organs are often more important than their knowledge of grammar.

This selection method creates hordes of bad reporters writing for papers and television. These days learning to be socialist apparatchiks in school takes precedence over knowledge of history or politics, and having immigrant parents has replaced accuracy as the cherry on the cake.

Some editors gripe about this in private. After a few drinks, they complain that they would like to hire by merit but know they would be fired for ‘racism.’ Editors increasingly hate hiring by genitalia and skin color. They stay quiet about it to keep their jobs and follow along meekly.

Linda Qiu is a Chinese/American with, in my opinion, a less than perfect understanding of English. I am not blaming her for this. It is not her fault she had poor English teachers in school and parents whose first language was not English. She is very left-winged and suffers from TDS. Along with her sex, that makes her perfect as a “fact-checker” with The New York Times. 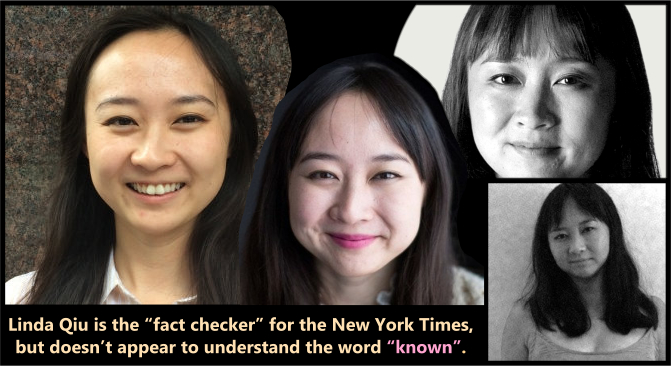 I have criticized Qiu before and notice she is not improving. In her latest attempt at fact-checking she picked on the following tweet by President Trump:

President Trump cited an array of statistics to paint a portrait

Tweets are, by definition, brief messages. To ‘cite’ is what speakers do when quoting other works, or attorneys when reading laws or precedents in court. It applies similarly to the word ‘array,’ which means a large or impressive number. You cannot have an array of things spoken about in a brief message, i.e., a tweet, just as you cannot have a ton of jellybeans in a small cup or a Marine platoon in a Mini Cooper. In the same vein, ‘paint a portrait’ is hardly something one does in a brief message or tweet. If a picture tells a thousand words, a portrait in words would involve at least a few hundred. How can you achieve that in a 46-word tweet?

of widespread criminal conduct by undocumented immigrants. Here’s the context behind them.

President Trump did not use the word ‘widespread.’ He provided figures showing the crimes committed by illegal immigrants. The vast majority are unseen. A tiny number are reported, and an even smaller number lead to convictions.

Twenty-two days into the longest government shutdown ever,

That makes it sound as though it has been the lengthiest partial shutdown for twenty-two days, whereas it only became the longest on day twenty-two. A clearer sentence would be, “Twenty-two days into the partial government shutdown, now the longest one ever,” but that would require a person who was not taught English by a Che Guevara clone.

President Trump continued to press his case for a border wall.

Donald Trump went to the last election, promising to build a wall, and won, so he has the mandate to build his wall. By my estimate, at least 150 million Americans want it, so it is their case he is pressing, not his. If Linda thinks it is his case, she has the wrong determiner.

His tweet on Saturday was crammed with statistics that were either exaggerated or omitted important context.

“Crammed” is the wrong word because, again, it is just seven stats in a 46-word brief statement. Here is the Trump tweet once more:

Imagine Linda jotting down shopping instructions for her goyfriend:

Were they seven items in a thirteen-word sentence? Wow, what a crammer! My last shopping list had thirty articles, so I must be a Sumo-crammer in Linda’s world.

His tweet on Saturday was crammed with statistics that were either exaggerated or omitted important context.

Trump used up every one of the 280 characters Twitter allows, so how could there be omissions?

So far, we have only covered Linda Qiu’s first two sentences, yet there are so many mistakes; it takes more than a page to explain them all. Let’s proceed to the second paragraph under the heading ‘Immigrant prison population.’

Mr. Trump’s figure for the percentage of unauthorized immigrants in federal prisons is exaggerated. Out of the Bureau of Prisons’ total inmate population of 183,058 in the first quarter of the 2018 fiscal year, 21 percent were immigrants, both legal and undocumented, according to a government report.

President Trump said that 23% of Federal inmates are illegal immigrants. Linda Qiu’s heading is ‘Immigrant prison population.’ She left out the word ‘illegal.’ So determined are Lefties in refusing to use the word, they even delete it from tweets they are discussing. Leaving that aside, she argues it is 21%, but the only evidence she provides is an old report about the first quarter of 2018, made before the invading Latin American mobs that are all the rage now. If anything Trump’s figures understate the problem. We also know that Liberals in sanctuary cities do their best to protect illegals from prison, so another question is, how many illegals who should be in jail are roaming around free? When you consider these points, Linda’s measly 2% fades away like the average liberal’s attention span.

Linda then addresses Trump’s tweeting that border arrests are up 240%.

Mr. Trump did not give a time frame for his 240 percent figure, nor did he specify what the number referred to, which may give the misleading impression that border crossings overall have increased threefold.

Trump was tweeting, not writing a book. When Anglo Saxons casually say something, like ‘crime rates are up by…’ it usually means over a year or several years. Whichever it is, such an increase is worth mentioning in a tweet. Also, 240% is not “threefold,” as that would require 300%. A 240% increase of 1 million is 2.4 million. A 300% increase of 1 million is 3 million. Being out by 600,000 does not matter to Lefties. What’s the difference, right Linda?

The figure instead refers to a surge in families attempting to cross at the southwest border.

Families? The video on this page shows a long line of young Latin American men, about the same age as soldier recruits in any army. The minute Lefties lapse into ignoring thousands of young male invaders, and focus on one or two females with kids, is the moment you know there is no debate – just false socialist propaganda.

I had a dream last night that featured Linda Qiu. She worked for the People’s Party of the new Soviet-Style America, handing out toilet paper to serfs who lined up for a mile. She had perks that went with the job, like sitting down and having an extra roll or two of TP for her family each week. What she liked most was saying ‘Nyet!’ to any slob wanting extra rations. One of the peasants looked like Trump, so she gave him a piece of cardboard instead. “Use that, comrade,” she cackled. Sometimes she traded her extra rolls for some pickled onions. Life was good.