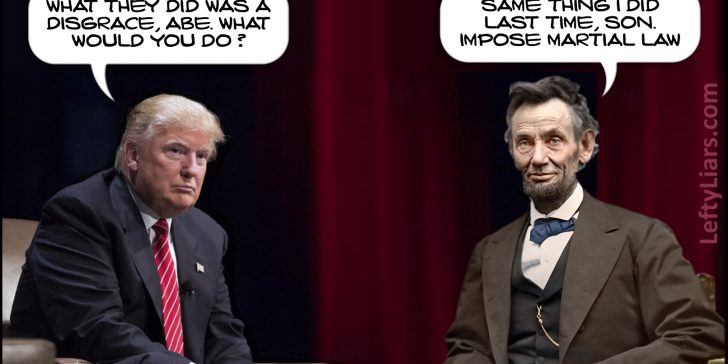 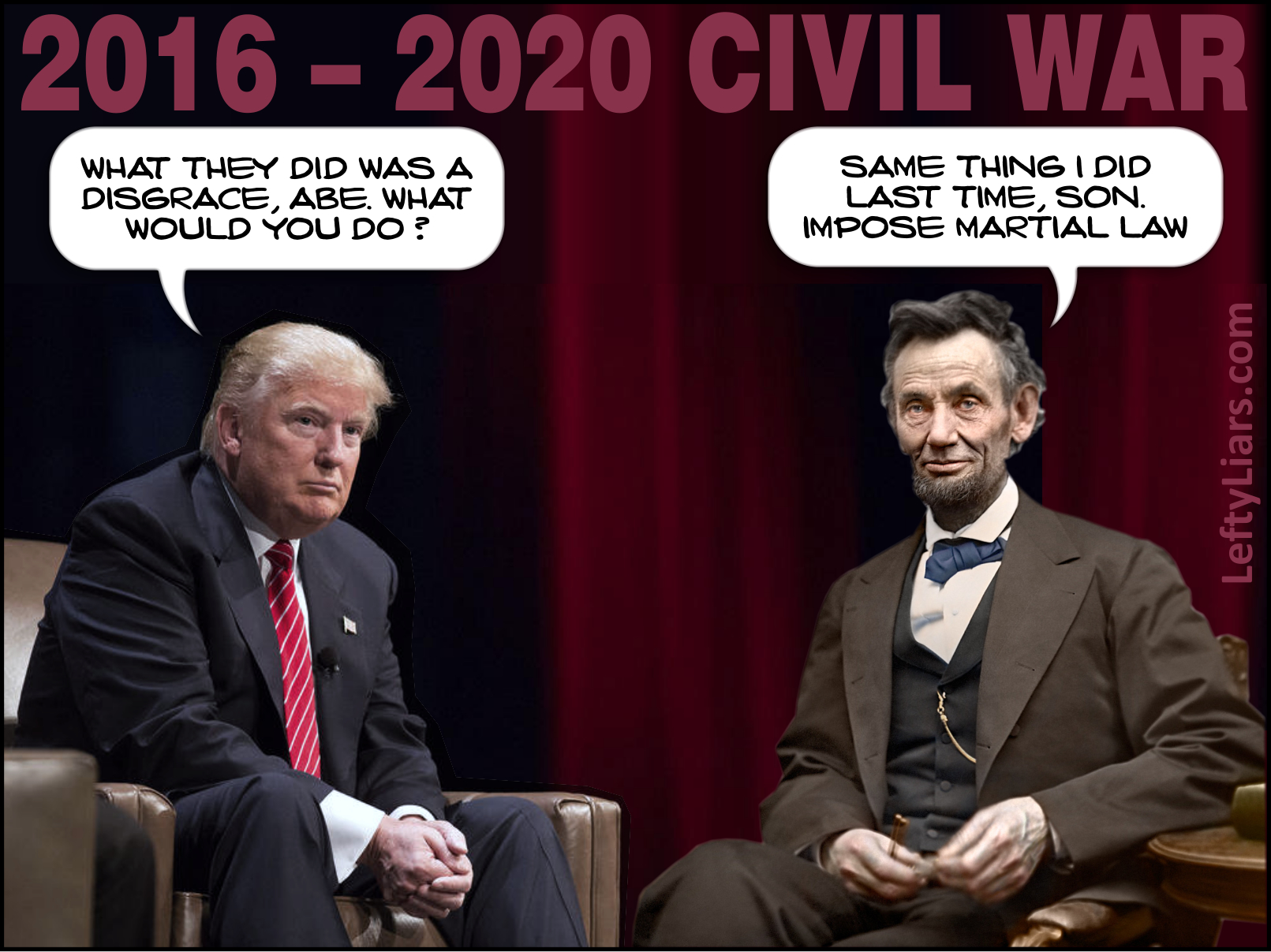 I have defended Donald Trump since he first announced his candidacy for President against the Mount Everest-sized tsunami of lies launched at him by Democrats and their allies, the CCP, Fake News, Fake Colleges, and Fake Movies. I predicted his win seven and a half months before election day, 2016, and started threads online asking people to find one lie Trump had told; here, there, and everywhere. As you can see, nobody could find a true Trump lie.

I started LeftyLiars to catalog some of the lies Lefties told, which is like counting mosquitoes in Cuba during the rainy season.

After Democrats stole votes in several States to secure a Biden ‘victory’ Trump tried all legal avenues to have re-elections but was blocked by liberal judges and swamp critters at every turn. The Left ‘won’ by stealing, cheating, lying, and committing fraud. When you add up all the shenanigans of the Left, including the Russia hoax, other hoaxes, White House treason, FBI treason, the fake impeachment, burning & looting of cities, big tech censorship, Fake News cover-ups & lies, ballot harvesting, illegal vote counting, rigged vote-counting machines, partisan activist judges, and other fraudulent activities, it amounts to massive insurrection.

It was not a coup, which is ‘a sudden appropriation of leadership or power.’ The revolt was longstanding over four years, from 2016 to 2020.

The enemy conducting this massive insurrection was a very powerful minority. Their mutiny can be described as a civil war  ̶  not with muskets, cannons, and horses, but with far more powerful modern weapons:

They also pillaged towns, filled the streets with tramps, burned down countless businesses, attacked the police, shot innocent bystanders, hounded diners, mobbed conservatives in their houses, encouraged crimes, and let criminals out of jail. They punished anyone who helped their President, jailed his defenders, found ways to ruin their careers, and encouraged revenge and violence.

Democrats turned the White House into a tool to attack President Trump, ignoring all their normal duties in the process. After spawning anarchy and mayhem, they blamed it on Trump, who was doing his best to bring law and order to the land.

Today most talking heads and professors think of muskets, wagons, horses, and muddy fields when they hear the words ‘civil war.’ Yet, nowadays, such a conflict would use none of those. You have not heard it portrayed this way because the Left controls information. Their influence is so great that few conservatives realize the US just lost a war.

Tucker Carlson, Sean Hannity, Breitbart journalists  ̶  have you noticed how much time they spend repeating what they hear on CNN, WAPO, or the Times? Do they spend too much time listening to the enemy? Perhaps some of that propaganda affects them, which might explain why none have figured out that the United States just went through a real war. Conservatives need to get a grip on what has happened and stop being virgins when it comes to internal wars that Fake News will never mention.

It is as if CNN is the ship, and conservative talking heads are some rebellious sailors at the bow, whispering about all the mistakes being made by the captain. Ahoy, me Mateys! It’s time to take the ship by force and throw the captain overboard!

The United States has been taken by the Left, who waged a successful civil war against it over the last four years. Wake up! Do not let CNN paint your world for you. They are the enemy and will scoff loudly at the idea of a civil war, which is why you know it is true. There is only one solution to a massive insurrection by a minority of troublemakers in a civil war, and that is Martial Law.

When I considered Trump’s options, I realized that as a businessman, his instinct would be to avoid military action and bow out, to return another day. But then I thought, what is the point of having the martial law choice in the first place if it is not used when most needed?

And if ever it was needed, it is required now. President Lincoln imposed Martial Law in 1863, which was very controversial but highly effective. You can read the details here, along with reasons why President Trump should do the same. The text is from a full-page ad in the Washington Post, paid for by Tom Zawistowski, President of the TEA Party affiliated We the People Convention (WTPC).

While some debate these measures still today, no one disagrees that Lincoln and his use of Presidential power were responsible for saving the Republic. While History, and even former President Obama, has judged Lincoln as perhaps our greatest President, few would have agreed at the time he took those actions. Then, as now, a President with courage and determination was needed to preserve the Union. Today, the current threat to our United States by the international and domestic socialist/communist left is much more serious than anything Lincoln or our nation has faced in its History – including the civil war.

We have well-funded, armed and trained Marxists in ANTIFA and BLM strategically positioned in our major cities acting openly with violence to silence opposition to their anti-American agenda. Attacking federal buildings and police, cowardly punching innocent people in the back of the head, assaulting people just eating in restaurants, and burning minority-owned businesses to the ground. All with elected officials in Democrat/Socialist-controlled cities openly encouraging this planned violence against civilians and businesses. Then, to advance their cause, these socialists are acting to “Defund the Police,” creating chaos and suspending the rule of law that protects millions of average, and particularly minority, Americans. The results being massive increases in violent crime and deaths in our cities and the destruction of small businesses orchestrated by those politicians and leftist groups, many funded by domestic and international communists. We are literally under attack from within!

Then there are admitted Democrat/Socialist federal officials plotting to finish gutting the US Constitution after 100 years of trying. They promise to take away critical individual rights like free speech, religious freedom and the 2nd Amendment; destroy states’ rights by eliminating the electoral college and more; pack the Supreme Court with activist anti-constitutionalist judges who will make law from the bench; give the right to vote to tens of millions of non-Americans; and open our borders to more illegals which will reduce wages. No one voted for these things that were hidden from the majority of Americans by the corrupt media. Not only do we have corrupt media, like in Lincoln’s day, we have a new and more sinister form of media in Big Tech, actively censoring free speech and promoting leftist propaganda to blind our citizens to their real goals and the real consequences of their actions – the end of America as we have known it.

I agree with Michael Flynn, Sidney Powell, and Tom Zawistowski. President Trump should impose Martial Law and order re-trials in the handful of States that cheated. Here are a few other things he should do when Martial Law is set in place:

That will knock the stuffing out of the Left, and then, President Trump, you will have made America great again.