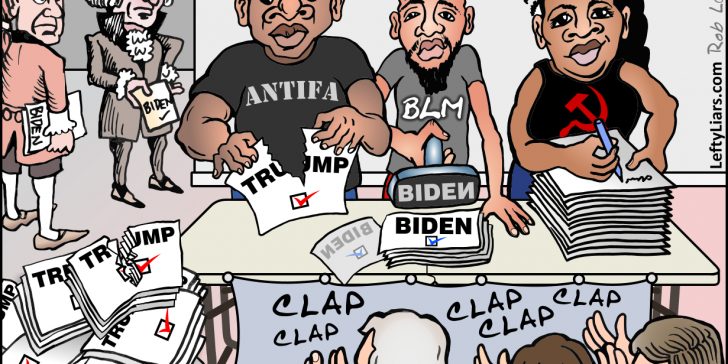 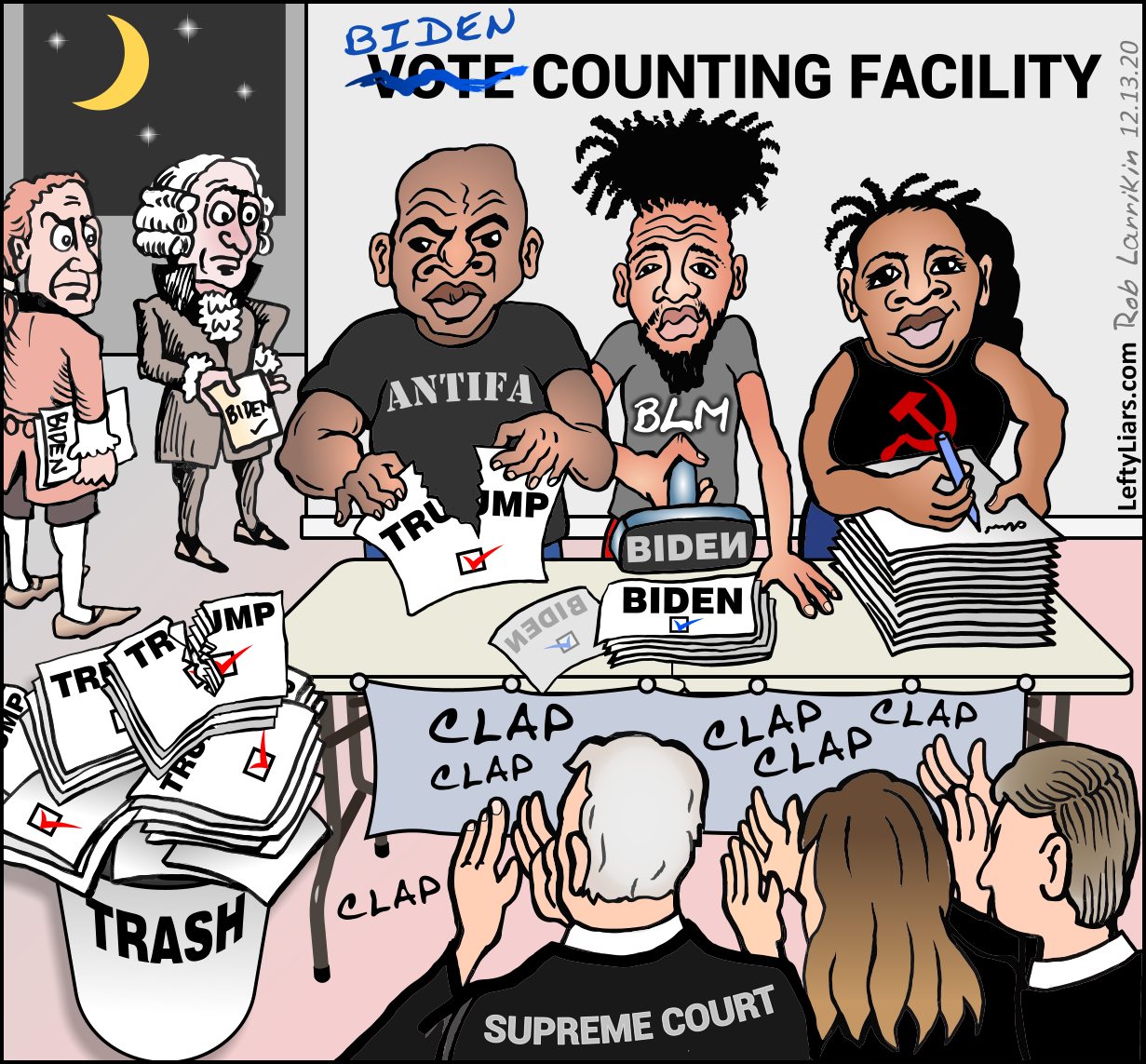 Conservatives everywhere shake their heads in disbelief at the antics of the Left, which they find bewildering. Meanwhile, Lefties glow with confidence, driven by a fervent ideology planted in their brains by teachers from elementary school to college. With militant fanaticism, they transform today’s children into racist, genderless doomsters who despise America, democracy, police, and the rule of law. Using Fake News, Big Tech, Hollywood, and Academia, Lefties lie, propagate hoaxes, withhold vital information, and rig elections. They allow Chinese communists to infiltrate the government, do deals with America’s enemies to enrich themselves, and betray everything the Founding Fathers embodied.

Take one of the latest great examples of Leftist bad behavior – stealing hundreds of thousands of votes in Arizona, Georgia, North Carolina, Michigan, Nevada, Pennsylvania, and Wisconsin. How many vote-counters were the same Antifa and Black Lives Matter thugs that looted stores during riots? They have no regard for law and order, proudly burning businesses to the ground and spitting on police. How could anyone trust them to count votes honestly?

Republicans look on in amazement as the Left steal elections from under them. Judges fail to prevent a handful of States from holding the entire country to ransom. The Supreme Court fails to order re-elections in States where millions of unrequested ballots were mailed out to be used by cheaters to create truckloads of Biden votes.

Yesterday the Supreme Court dismissed the Texas 2020 election challenge, giving Hollywood celebs reason to gloat. Trojan Horse Justice John Roberts is partly to blame since he rejected the Pennsylvania suit before the election. Justices Gorsuch, Kavanaugh, and Barrett joined Roberts and the three liberal justices in declining to hear Texas v. Pennsylvania, so perhaps Trump’s picks were not conservative enough after all.

On the bright side, trolls can no longer say Trump gained an advantage from his Supreme Court appointments. There is still time, and the specifics outlined may be addressed in a comeback by Ken Paxton, the Texas attorney general. A contested election is still a possibility. Faithless Electors cannot save the day since they will only be defeated in the Senate. It comes down to what can be achieved in the states, but the Deep State will probably win this time around. Swamp critters are a powerful force when they all work together and use crime to defeat the forces of good, and weak judges are no match for them.

A sticking point for needed change is ‘States Rights,’ because in the case of Presidential Elections, one state’s shenanigans can force the other forty-nine states to endure the wrong government for four long years, and that is treasonous. The idea that one state can ruin the election for all 50 states is breathtakingly absurd, yet many partisan judges are willing to use ‘state rights’ as an excuse to allow it. “The federal government has no right to regulate our voting laws,” they whine, as though usurping the federal election is enshrined in their existence as a mere state.

The United States’ voting woes began when its constitution left decisions about who could vote up to the States. As a result, only certain groups were allowed to vote, and while this gradually changed over time, the idea of leaving voting rules to each state continued to be problematic.

The Founding Fathers trusted people to be civilized and follow the rules. They knew while a tiny minority might cause trouble, the vast majority would never consider cheating. In their day, people were raised with discipline, and most would vote honestly.

Founders assumed it would always be that way, but if they were to jump in a time machine and visit today’s America, they would be horrified to see the state of anarchy regarding voting. Were they to see the vote harvesting, forged ballots, false counting, unrequested mailed out ballots, truckloads of fake ballots, lack of transparency, bullying of observers, illegal processing, counting votes more than once, cheating with dates, use of dead voters, use of incorrect mailing addresses, usage of corrupt vote-counting machines, and deliberate government fraud, they would want to edit their beloved constitution immediately.

They might need tutoring to help them understand our computer technology, passwords, phones, cameras, and other technology, but the Founding Fathers would soon rush back to make changes. The first change would be to make voting rules a Federal Law that all States must follow. Their reasoning for that would be simple:

When a Presidential Election is very close, and the result comes down to one or several states, and the ballots for each side are almost equal, the outcome could hinge on a few thousand, even a few hundred votes. The tiniest amount of vote-rigging or theft could steal the rightful President and Party’s election under those conditions. In a world where thievery and skullduggery are commonplace, no amount of vote-rigging can be tolerated.

The new rules would look something like the following:

Compare the current voting system with other activities we take for granted. When you pay bills online, you need to input your email address and password. After nominating a payee and an amount, you receive an SMS password from the bank. After entering the password, your funds are transferred. When you opened your bank account, they asked you for your social security number, driver’s license, passport, and possibly more (birth certificate, utility bills) to prove your identity.

Why not use the same system to register voters? If banks do it, why can’t State or Federal governments? After providing the same documents and a sample signature, voters would be registered and provided an online account with a username and password.

Elisa Hampton stands in a line to vote. When she reaches the desk, a man says, “Do you have a driver’s license or Social Security number?”
“Sure,” Elisa says, handing her license over.
“Thank you,” he says, looking her up in the computer.
“Elkins Court?” he asks.
“That’s the one.”
“Do you have your phone with you?” he asks.
“I do,” Elisa replies.
He presses a key on his computer and Elisa’s phone trills. “Can you tell me the number I just sent you?”
“Why yes,” Elisa says, checking her phone. “917043.”
“Thank you, ma’am,” he says, letting the computer know she is voting. “Please proceed to a voting booth.”
Elisa walks to a booth and finds a voting form. She fills out her name and address in uppercase, checks a box next to her candidate’s or candidates’ name/s, and signs the ballot. Folding it in half, she slips it into the slot on a voting ballot box and leaves the building. The box is eventually taken to the counting facility. There, an election official, watched by a certified observer, scans Elisa’s ballot. It matches her signature with the one on file. After she and her observer compare the signature, she validates Elisa’s vote/s and puts the ballot aside for safekeeping.

John Smith cannot walk to the polling booth, so he goes online to request a mail ballot. After logging into his account and filling in the request form, John receives an SMS password, which he types into the form online. He is now approved, and the mail ballot form is mailed out to him.

Opening the ballot, John finds the alphanumeric passcode 4928YB3914V printed at the top of the page. Below that, a message reads, “Dear voter, please go to your online account and input the passcode above.”
John goes online, logs onto his voter registration page, and inputs the passcode. A message reads, “Thank you. Please fill in your ballot, sign it, seal it, and place it in your mailbox or a blue community collection box.”

John does not have to write his name, address, SSN, or provide any other piece of personal information. He checks the box or boxes next to his chosen candidate/s, signs on the dotted line, and posts his ballot.

When the mailed vote arrives at the polling station, it is examined while a partisan observer watches, and this examination ensues under a surveillance camera connected to the web. The signature is verified, and the vote/s is/are processed. The physical ballot is kept for the records. The voter can log on anytime to see that his vote/s was/were correctly processed.

There are plenty of ballot thieves around, and when one steals John’s ballot, he opens it to see the alphanumeric passcode. The only thing he knows is John’s name and address on the envelope. He has no login information, so he cannot input the password.  After scratching his head, he checks the box next to Biden, signs the ballot with a scribble, and drops it into a collection box.

The stolen ballot goes to the counting facility where it is examined. An election official, watched by a certified observer, opens the vote and scans its passcode. A computer flashes a red screen with the message, “Ballot Invalid. Voter John Smith has not confirmed passcode.”

The election official places the paper in a pile of similarly rejected ballots. Later, another election official will contact each voter in the stack, including John Smith.
“Hello, John here.”
“Hi John, this is Majella from the Houston vote counting facility, and I’m calling to ask if you received your mailed out ballot.”
“Never received it,” John replies, gruffly.
“It appears someone has signed it and sent it in with a vote for Biden,” Majella explains.
“Biden? Heck no, I’m voting for Trump. That’s crazy. You mean they stole my mail?”
“It looks that way, yes,” Majella says. “In cases like this, where time is short, the rules permit me to override the system for you. I can manually input your vote now if you like, and I have two observers beside me, listening.”
“Yes, thanks, I wanna vote for Trump,” John rasps.
“Donald Trump?” Majella confirms. “Yes, sir, I’m inputting that vote for you now.” Majella presses a button marked Trump while the observers next to her nod. She does the same for any other choices John has.

So much for the common variety yellow-bellied Democrat ballot thief. Others may use force to have a mail vote recipient to vote a certain way, but crimes of that nature are much rarer than simply stealing ballots from mailboxes. Mail harvesting would be a federal offense, attracting ten-year jail sentences, and not tolerated by any vote counting facility. If caught accepting harvested ballots, management of such facilities would be punished more severely, with 20-year jail sentences.

If the mailed-out ballot went to the wrong address and ended up with the wrong person, they would see the following message;

“If you are not the intended recipient of this letter, do not open it. The maximum penalty for doing so is five years in prison. Please return to sender as soon as possible.”

Most people would return the letter, but registering online would be very difficult anyway without the password.

The Founding Fathers could not know everything, and commonsense tells us the United States’ voting laws need to be Federalized and equal, with plain sense rules and signature/ID confirmation. The Supreme Court and congress need to make this happen for the sake of democracy, not just for the United States, but for countries who will be affected all over the world. If thieving socialists take over America, China may end up occupying most of the world. It is that important.