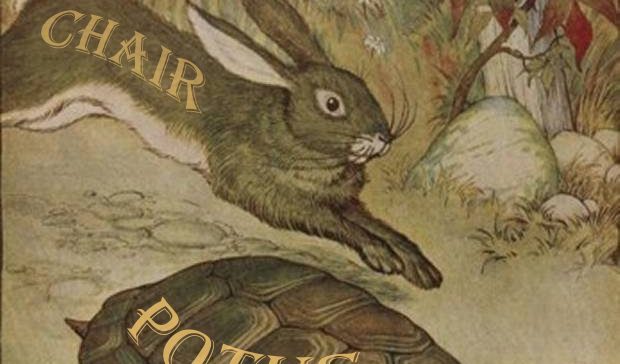 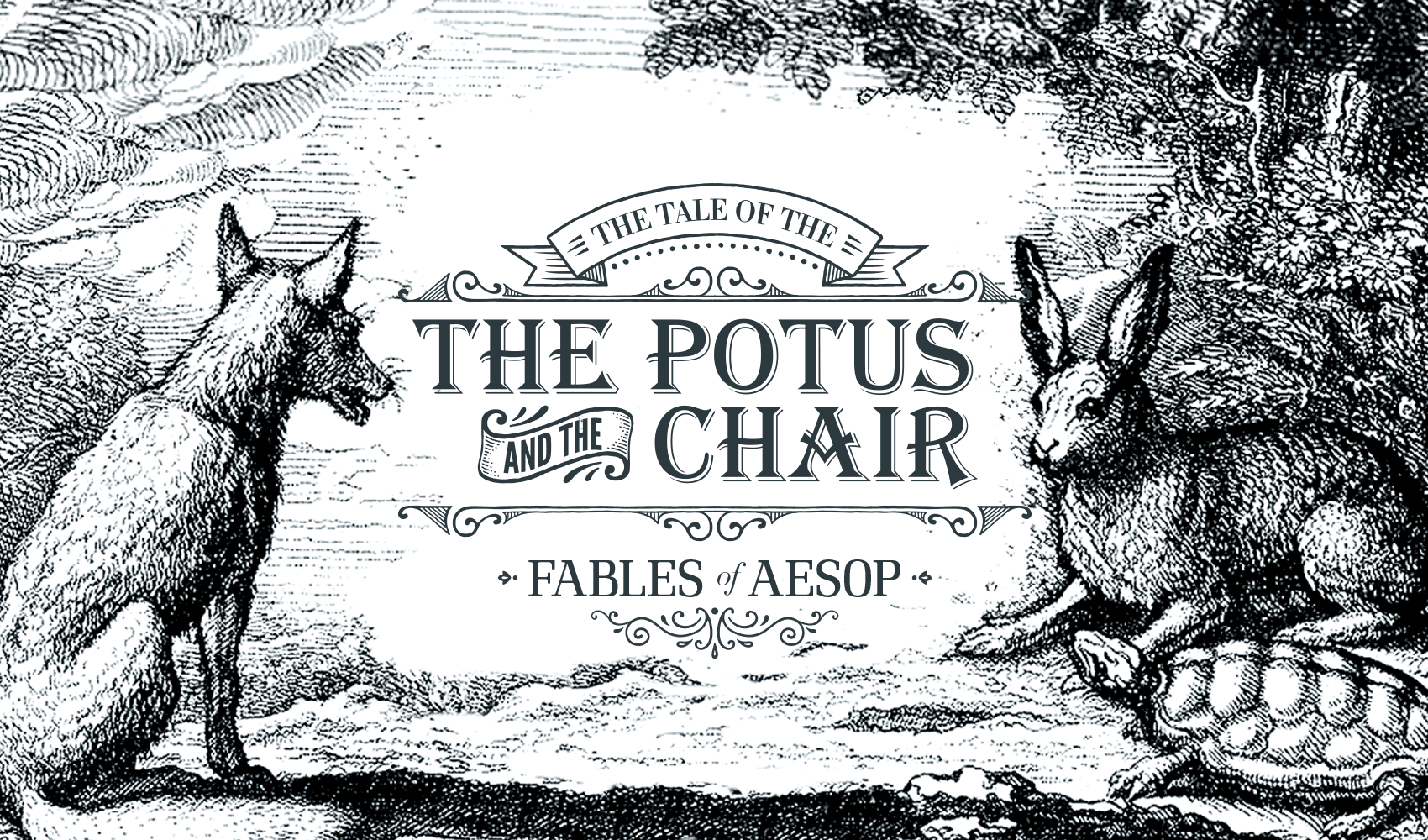 The Chair Pelosi was making fun of POTUS Trump one day for wanting a wall.
“Will you ever build it?” she asked with a mocking laugh.
“Yes,” replied the POTUS, “and I will build it sooner than you think. I will race you politically to get my wall.”
Chair Pelosi was much amused at the idea of racing Trump politically over a wall, but for the fun of the thing, she agreed. Fox News, who had consented to act as judge, noted the date and started the competitors off. Pelosi knew Trump would never get his wall constructed because she had Fake News, Hollywood, and all schools and colleges across the land to help her block it. What hope would Trump have against those mighty forces?

The POTUS had some ideas of his own. He could always declare an emergency and build a wall without congressional approval, for that was his right as President, though Fake News would then accuse him of ‘cheating’ and call him a coward, saying he used loopholes and the back door, etc.

They were so predictable.

Trump would use Fake News in the same way. He called a press conference and invited Pelosi and Chuck Schumer. Trump declared that to get his wall, he would shut down the government and take the blame for it. This was the bait.

What Pelosi did not understand was that Trump wanted to be blamed for the shutdown, just as Br’er Rabbit wanted to be thrown into the briar patch..

It worked. As soon as Trump shut down the government Pelosi’s Fake News began attacking Trump for this, heaping all the blame for the shutdown on him. Trump kept repeating the same message to the public; “I will not open up government unless I can build my wall! We need that wall!”

Pelosi said over and over, “We will not let Trump build the wall!”

From the public’s point of view, the message was, “Trump is trying really hard to build a wall, and Pelosi won’t let him.”

Soon Pelosi was far out of sight in her mountains of Fake News, and to make Trump feel very deeply how ridiculous it was for him to try to build a wall, she went on a vacation in Hawaii. “This will show Trump how unconcerned I am about his silly challenge,” she thought.

While Pelosi was taking a nap on the beach in Hawaii, Trump pressed on with his messages about the wall, in the White House. The public saw him hard at work, trying to get his wall approved, and they saw Pelosi napping in Hawaii.

As Pelosi napped on the beach, she dreamt she was a hare, racing a tortoise. ‘A POTUS tortoise’ she smiled. She imagined Trump way down the start of the race, stumbling along, while she stretched out for a nap near the end, waiting for him to catch up. It was so easy to beat him.

Trump meanwhile kept going slowly but steadily. He continued repeating his message about needing the wall, and that he would not open the government until he was given money for his wall. Fake News was going all out at this stage, painting Trump as a villain who was keeping public servants poor. Trump then surprised them all by ending the government shutdown temporarily.

This was to let the public servants pick up their wages, but it created a massive reaction from Fake News. They began screeching “LOSER” at the POTUS. Some Trump supporters, including Ann Coulter and Piers Morgan, lost their cool. Coulter called Trump a liar while Morgan called him a chump. They probably winced as children when Br’er Fox threw Br’er Rabbit into the briar patch. “Why are you wincing?” their teacher would have asked. “Didn’t you understand that Br’er Rabbit wanted to be thrown there?”

This is why commentators are often lousy politicians. They can talk about politics but do not understand the mechanics of it.

Once the temporary resumption came to an end, POTUS shut down the government again, and this sent Fake News into another blizzard of hysteria. Mostly comprised of young college Trump-haters who knew little about life, they could not understand why the President would do this and were unable to cope. They called for him to be impeached by reason of insanity, as the POTUS predicted they would. It was all part of his plan.

He knew that after the press churned out this news, time and again about him wanting a wall so badly that he shut down the government twice, the public would be well aware of his efforts. Fake News could never get away with their other predictable lie; that imposing a state of emergency was a ‘cheap’ or ‘back door’ method, used by someone who was too lazy to try to win the usual way.

Sure enough, after a few more weeks of a shutdown government, POTUS re-opened the government and declared a state of emergency so that he could use emergency money to build the wall. Pelosi organized fellow democrats and a few RINOs to repeal Trump’s declaration, but POTUS vetoed that resolution.

The wall would now be built!

Pelosi and Fake News reacted just as POTUS thought they would. They screeched, “Coward! Criminal! Trump is using a back door method – the cheat’s way! He is too lazy to work to get his wall, he just wants to use the easy way! It’s anarchy!” 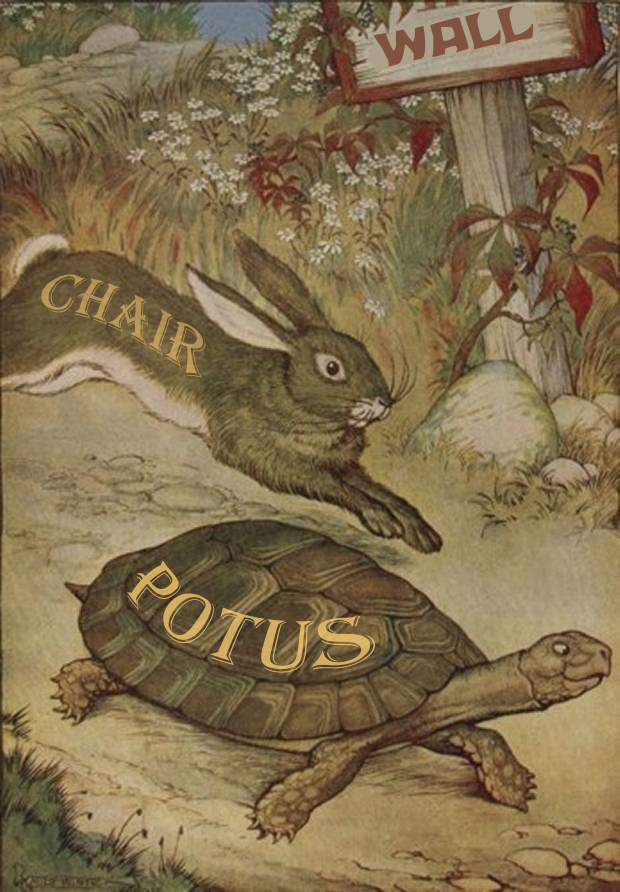 Pelosi thought this would win her the race, as she charged up to the finish line, but there before her, she could see the POTUS near his goal. The Chair ran her swiftest but could not overtake the POTUS in time. He crossed the line before her.

The polls showed that the public was on Trump’s side. The people could easily see, thanks to all the work of Fake News, that he had worked very hard to get his wall, and that this state of emergency was indeed justified.

Even Ann Coulter and Piers Morgan applauded. “He used Fake News to make his own work obvious,” they declared.

Like an Aikido master, Trump utilized Fake News’ weight and momentum to his advantage, tripping them, so they slammed into the ground. In the process, they lost all credibility, even with the Left. Nobody will take them seriously again.

As POTUS begin building his wall Chair Pelosi sat on it to rest. “Sitting on the fence I see,” POTUS quipped. Chair sprang up, embarrassed. “I was testing it,” she insisted, red-faced, and began trudging back to her drawing board to think up another way to stop POTUS.

A voice cried out from the wind above, that sounded like Ronald Reagan’s ghost. “There you go again,” it mocked. Pelosi hiked her chin up and soldiered on, muttering about men.

The moral of the story is for Fake News reporters and editors:

Lying only helps your opponents win.