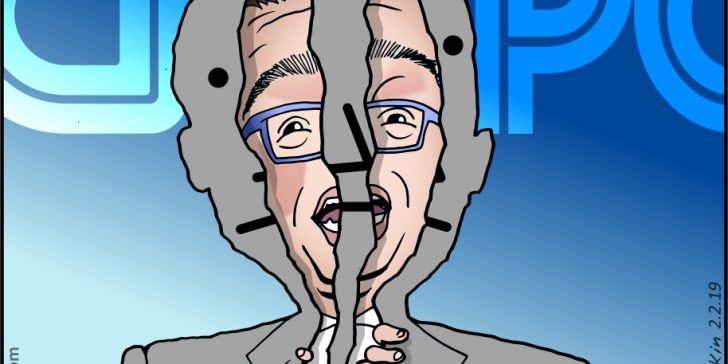 Although it appears Chris Cillizza has a problem with English, he is an editor-at-large in far-left CNN. Perhaps a better title might be NPC-at-large. Why is he at large anyway? Many would say lock the guy up and throw away the key. The subtleties of our language are difficult for some, especially those with parents for whom English was not the first language. If they additionally suffer from Trump Derangement Syndrome, journalism might be a hasty choice. It would probably make it difficult for them to be objective. Yet, for all his difficulties, you get the feeling Cillizza has a real journalist inside him trying to bust out.

Last Wednesday Donald Trump was interviewed by reporters from the Daily Caller, who published the transcript here. Cillizza decided to show us how he likes to quote Trump out of context as only an NPC could, in this piece.

Referring to Stephen Paddock, the 2017 Las Vegas shooter, Trump said many things, including;

He had money — or at least they think he had money. He was a gambler, you know, you don’t see too many gamblers that have money.

He was a gambler, you know, you don’t see too many gamblers that have money.

Trump was trying to say that Paddock may not have had money. By removing the first part of that statement, Cillizza changed it to mean he definitely had money – a very different declaration. If Cillizza understood the nuances of the English language better, he would know this.

Regarding how much force the FBI used in their raid on Roger Stone’s house, Trump said [color coding mine]:

I thought it was very unusual. You know, I’ve stayed out of that whole situation so that — because there was no collusion whatsoever. There was no nothing done wrong and frankly, I could have waded in very early, I could have ended it very easily if I wanted to but just let it run its course.  But I will say, like, I’m speaking for a lot of people that were very disappointed to see that go down that way, to see it happen where it was on camera, on top of it. That was a very, very disappointing scene —.

From that, Cillizza quoted Trump as saying:

You know, I’ve stayed out of that whole situation so that — because there was no collusion whatsoever.

After lopping off the rest of Trump’s answer, Cillizza asked:

What “situation” is Trump referring to here?

As Trump said in his next sentence Cillizza, “…frankly, I could have waded in very early, I could have ended it very easily if I wanted to but just let it run its course.”

Cillizza rants on about how Trump didn’t tell us which situation for another paragraph, after cutting out the situation described from Trump’s words. It is as if he is talking to himself.

Regarding Stone’s FBI raid, the Daily Caller asked, “You thought it was unusual that CNN was there?”

You have 29 people and you have armored vehicles and you had all of the other and, you know, many people know Roger, and Roger is not a person that they would have to worry about from that standpoint. I thought it was sad to see it.

What’s remarkable about this — and the fact that Trump in the next sentence says he would consider asking the FBI to look into its use of force in the Stone arrest — is that the President has repeatedly urged law enforcement to be tougher in its dealings with criminals. “When you see these thugs thrown into the back of a paddy wagon. You see them thrown in, rough. I said, ‘Please don’t be too nice,'” Trump said in a speech to police officers in 2017.

Remember, Chris Cillizza is a CNN editor-at-large, yet appears unaware that Roger Stone is a respectable 66-year-old political consultant, author, and lobbyist who worked on the campaigns of many great men, including Presidents Nixon, Reagan, and Trump. Even left-winged Wikipedia can tell Cillizza that Stone is no criminal or thug. He is falsely accused of white-collar crimes by Trump haters and will be tried in their Kangaroo Court as a warning to those who dare side with the POTUS. That kind of thuggery only turns more voters away from socialist Democrats who will have their backsides roasted at the next election.

When asked about how much the FBI committed to the Las Vegas Paddock case versus the Mueller investigation, Trump replied:

What a great question that is. It’s one of the better questions. I hope you’re going to play your question because that is a very, very interesting — you’re talking about, I guess they’re well over 30 million dollars now on this Russian collusion hoax, and everybody knows it’s a hoax. They’ve spent all this money. Nothing. No phone calls, no meetings, no nothing.

Trump’s not that far off-base on the price tag — $25 million has been spent on special counsel Robert Mueller’s probe since it began in May 2017, according to the most recent filings.

Tsk tsk, Cillizza – there is that English Comprehension problem again. Trump said, “I guess they’re well over 30 million.” Look up ‘guess’ in the dictionary. You talk about the ‘most recent filings’ as if there were no costs since then. I would go with a billionaire businessman’s guess on the expenses rather than your ‘most recent filings’ any day of the week.

Where he REALLY misses the fact boat is in claiming that the Mueller probe has produced zero tangible results.

Trump did not use the words ‘tangible’ or ‘zero’ for starters, and when he said they had no results, he meant nothing was tying him to any Russian collusion, which is true.

To date, the investigation has produced 199 criminal counts against 37 people and entities. Seven people have pleaded guilty and four have been sentenced to prison. One — Paul Manafort — has been convicted by a jury of his peers. That’s not nothing.

Actually, it is nothing, because the Mueller Probe was supposed to be an investigation of the Russian government’s efforts to interfere in the 2016 presidential election, including any possible links or coordination between Donald Trump’s presidential campaign and the Russian government. As President Trump said, they found nothing. If you know of one piece of evidence Mueller found, to show such links, Cillizza, by all means, spit it out.

“You look at it, and you say, isn’t that sad to have devoted this time, this energy over a — you know, look, there’s been numerous books written right now, including number one best sellers, calling it a ‘hoax.'”

Trump’s referring to “The Russia Hoax: The Illicit Scheme to Clear Hillary Clinton and Frame Donald Trump” by Gregg Jarrett. Jarrett is a Fox News personality. Draw your own conclusions.

Actually, Trump was referring to many books that call the Mueller witch-hunt a hoax. Greg Jarrett’s is one, and Jarrett is far more than just a Fox News “personality.” He is Fox News’ legal analyst who formerly worked as a defense attorney and adjunct law professor. The book he linked to has a 5-star rating from 1639 customer reviews (so far).

Trump is saying here that the Mueller probe has gone on too long already. By way of context, the special counsel investigations into Iran-Contra and Whitewater lasted more than six years each.

The special counsel investigation into Watergate was only about six months long, and that was about real issues, albeit blown out of all proportion by Democrats and Fake News. This witch hunt has dragged on for almost two years, and it is about nothing. Mueller’s probe was too long the day it started because it is nothing but a political tactic to slow the POTUS down.

WHY WHY WHY are all these people in Trump’s orbit willing to lie to federal authorities about their contacts with the Russians?

To a KGB interrogator, forgetting or confusing insignificant events was “lying.”  If you were drilled using Mueller’s approach Cillizza, you would be branded a liar very quickly. He would question you about a lunch you had four years ago with a reporter who had worked in Russia. You would be asked what kind of meal you ordered that day. You would shrug and say, “Caesar salad, I think.” When asked again a month later you would shrug again and say, “I dunno – chicken salad.” Mueller could then indict you for “lying.” Democrat thugs use the same KGB technique to brand 72-year-old Trump a liar, commonly.

Two thoughts here. First, it’s not at all clear that Trump could have “terminated” the Mueller probe.

If that is true, why did Democrats and Fake News insist so often that he would do just that?

Second, this past 20 months is what “stay[ing] out of it” looks like for Donald Trump, eh?

There is that English comprehension glitch again. When Trump says, “I’ve chosen to stay out of it,” he means he chose not to terminate or end the witch-hunt. That does not mean he cannot criticize or discuss it.

Paul [Ryan] told me in the strongest of terms that, ‘please sign this and if you sign this we will get you that wall,’… and then he went lame duck. And once he went lame duck it was just really an exercise in waving to people and the power was gone, so I was very disappointed.”

Rather than saying “retired,” I propose we say “went lame duck” in the future. As in: “Hey, did Cillizza leave CNN? No, he went lame duck. He and his wife are living up in the Catskills now.”

I am sure many of your Sicilian countrymen could explain to you Cillizza that when you promise something to your boss and then announce you are retiring before honoring your promise, your boss will say you went lame duck.

I don’t want to say he lied. I think he probably meant it at the time, I guess. I hope. So I don’t call that lying.”

“It’s not a lie if you believe it.” — George Costanza

George was correct, Cillizza. Lie means ‘a false statement made with deliberate intent to deceive; an intentional untruth; a falsehood.’

How many English lessons does that make for our CNN editor?

I’m going to be announcing the exact numbers but I’ll have over a hundred miles of wall either built or under construction between new and renovated.

This is false. No construction has begun on the wall President Trump promised. The President said he would be going to a “ground-breaking’ for the wall around the time of SOTU and that hasn’t happened.

This is untrue. As I explained two months ago here, Trump’s wall is being built. When the Left says no mobs are heading to the United States from Latin America, or when they say the wall is not being made or refurbished, they are lying.

The rest of Cillizza’s piece continues in the same way. Fake News and out of context quotes. Imagine if CNN hired an editor whose grasp of English was flawless and if Chris Cillizza opened up a pizza shop. “Cillizza Pizza” has a nice ring to it. Go with the flow, Chris. The world is always going to need pizzas. Why fight your calling?