Yesterday CNN published an article by Dorothy A. Brown, a black professor of law at Emory University School of Law, Atlanta, Georgia. Professor Brown’s area of expertise is tax law and ‘critical race theory,’ a weird mixture to say the least, but nothing surprises us about universities these days. To skeptics, the title ‘critical race theory,’ taught by an angry black woman, is just another name for ‘Why We Hate Crackers.’

Brown wrote the anti-Trump article in response to a tweet Trump put up Wednesday, showing a homicidal illegal immigrant licking his chops over the idea of murdering policemen – a monster in every sense of the word if ever there was one.

It is outrageous what the Democrats are doing to our Country. Vote Republican now! https://t.co/0pWiwCHGbh pic.twitter.com/2crea9HF7G

Trump’s tweet predictably caused a storm of protest from Lefties, who were quick to call him a racist. Professor Dorothy A. Brown wrote [emphasis mine]:

President Donald Trump is at it again, tweeting a thinly veiled racist attack ad designed to turn out his white base for the midterm elections. According to CNN exit polls 57% of white people voted for Trump in 2016. He needs them to come out and vote Tuesday to keep a Republican majority in Congress.

Notice that our race-obsessed professor is talking about white people as though her audience is black. Also, she did not bother to explain why showing a murderous illegal immigrant is racist. As for CNN exit polls in 2016, is she kidding? How many blacks would have admitted to pollsters that they voted for Trump? How many whites would acknowledge that either, in front of others, as they left a voting booth? Revealing such a thing is dangerous, in case Professor Brown has not noticed. Her peers, such as Congresswoman Maxine Waters, encourage Democrats to beat up any conservatives they find on the street, so why would anyone want to volunteer that information publicly? The CNN exit polls were about as accurate as their predictions of an overwhelming Clinton win.

The ad shows some frightening video of an undocumented immigrant from Mexico talking about killing police in the past and hopefully (he says, as he is led away by authorities) in the future. He smiles as he does this; his lawyer has said he is mentally ill.

Brown defended the murderer by changing ‘illegal’ to ‘undocumented,’ as that sounds less criminal. She also used the word ‘talking’ instead of ‘gloating,’ ‘leering,’ ‘bragging,’ ‘boasting,’ ‘ogling,’ ‘taunting,’ ‘threatening,’ or ‘promising.’ Brown then inserted the part about him being led away by authorities to remind readers that he is under arrest and they are dominating him, as though that is some kind of justification for his offensive threats. Just for good measure, she added that his lawyer said he is mentally ill, and so once again, the Left defend murderous monsters, as they did with MS-13. Their loyalty lies not with law-abiding American citizens, but with murderous illegal immigrants. What is more, they believe that to do anything else is ‘racism.’ 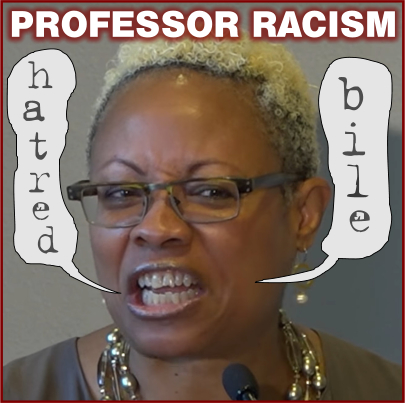 The libertarian Cato Institute published a study based on Texas data that showed native-born citizens are more likely to be convicted of committing violent crimes, such as homicide, than either undocumented or legal immigrants.

The link she provided goes to a study written and compiled by Alex Nowrasteh, a Leftie whose details can be seen here. He’s totally biased, and Lefties like him never let facts get in their way. He supports the migrant mob invasion and is as anti-Trump as they come. Professor Brown chose his stats because they give a false impression that illegal immigrants are not that harmful, which is wrong. To get a much clearer idea of what is happening, check out the Texas governor’s own stats on the subject. Here is an example:

So it appears that Professor Brown is wrong, and that is no surprise. There is nothing racist about the President showing us a violent illegal immigrant, to point to the dangers of unregulated immigration. That is mind-numbingly obvious, but not to modern “professors” with the massive chips they have on their shoulders about race and racism.

Brown is just another Leftist Trump hater with the usual collection of clichéd placards. In this video, she provides a ten-minute speech about racism. Unlike Trump, who knows his subject so well he rarely uses notes, Dorothy spends a quarter of the address (2.5 minutes) referring to her jottings. The video below shows all the bits with her reading notes, put together. That is how much she cannot remember. I must admit though – if I had to speak that much nonsense, I would have to read notes as well.

I guess CNN must really be scraping the bottom of the barrel to come up with writers for their Fake News. NPCs are not very imaginative so they will take what they can get.