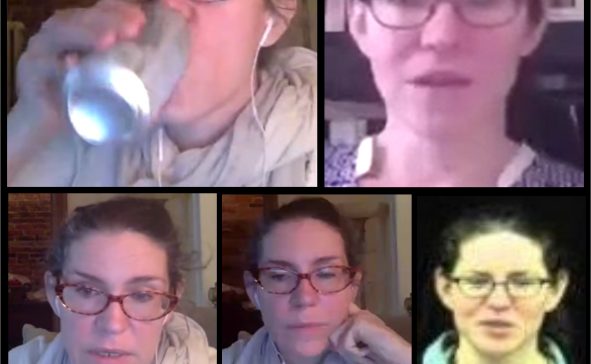 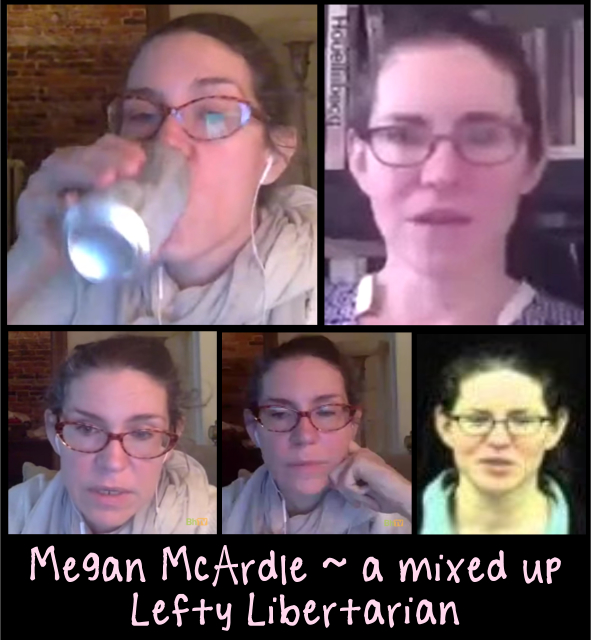 Yesterday a Washington Post ‘columnist,’ Megan McArdle, wrote this sneering attack on her President, which I answer below. It is part of a continuing war The Post has been waging against Trump from the day he announced his candidacy on June 16, 2015.

The Post no longer cares about journalist codes of integrity. They will publish any diatribe against Trump, however untrue, regardless of errors. If their current pattern of behavior continues unchanged, I guess we can expect high school girls to be writing most of their articles before long. In the case of Megan McArdle, the ‘article’ is pure trolling. It is the kind of rambling, sneering collection of clichéd insults and misquotes you commonly find on discussion boards. That level of writing is good enough for the Washington Post nowadays.

Trump seems to enjoy dictator cosplay. But he’s no fascist.

‘Cosplay’ is short for ‘costume play.’ Kids in Superman costumes pretending to fly is an example of cosplay. So the troll insult here is that Trump is not a real President, just a pretend one. Despite Megan’s wish-fulfillment fantasy, no, Donald Trump is indeed a real President. The ‘no fascist’ part is contradicted a few times in her post, making it a little lost and confusing.

I’d always shuddered to imagine what it would be like to live as a dissident under some autocratic regime, hunted and harried as an “enemy of the people.” And now I suppose I’m getting a slight taste of it, since President Trump on Monday tweeted that the “Fake News (Media) is the Enemy of the People.” He later specified on Fox News that The Post falls into that category.

Having just said Trump is no fascist, Megan is now calling him an autocrat for expressing an opinion. If she believes that, then she must think The Washington Post is autocratic also, for expressing many views and for hunting and harrying Trump every day.

Some journalists are greatly alarmed,

If that were so, you could point to them, Megan, but you did not. I see no journalists ‘greatly alarmed’ by Trump defending himself against Fake News. They are angry, just as any Socialist mob is angry when people stand up to them. Hitler’s National Socialists hated it when Jews stood up to them. “The nerve!” they would shout with great indignation.

but I just can’t muster much fear of persecution. The president struggles to control a handful of his senior staff;

Making politicians do their jobs properly would be a struggle for anyone. If Obama did not struggle, he was not doing his job. Trump controls them very well, and when there is any problem, he sacks them. It is how he keeps his staff top rate.

You just said he struggled to control them. “Strong-arm” means to use force on, assault, bully, intimidate and even rob by force. So was he struggling or bullying?

into carrying out any purges he fancies looks entirely beyond his capacities.

When we mention political purges, we are usually talking about Stalin or Mao, who were Socialists like your Democrat Party. They purged their prison States of critics, murdering more than a hundred million citizens. Like you, they hated businessmen like Trump.

The job of U.S. president ought to offer enough drama and pageantry to satisfy anyone. Trump should have neither the time nor the need to spend afternoons dressing up as Dear Leader and strutting through our Twitter feeds.

Translation: Stop tweeting. Trump’s tweets were the way he was able to circumvent Fake News, which is why Fake News has obsessively tried to get Trump to stop sending them. Most gave up on that hopeless cause a year ago. Megan must be behind the times.

His supporters might respond that he is justified: that the media has a liberal bias

Trump does not criticize the media – he criticizes Fake News. You like to avoid that distinction, which is what makes you Fake News. Remember, Fox News and some other conservative media are not Fake News, so there is a difference.

Most media outlets do indeed list to the left,

and they’re certainly not overfond of Trump. But I’d ask my conservative friends whether dubbing them enemies of the people is really the best way to go about correcting that problem.

By ‘them,’ you mean the media, which is wrong since he said ‘Fake News.’ Also, he did not say ‘enemies of the people.’ He said, ‘enemy of the people,’ so you are misquoting him again.

I’ve written more than my share on media bias, but I’ve managed to avoid defaming a huge profession, with tens of thousands of individuals, as a massive fifth column.

Not media – Fake News. Fox News is media, but they are not Fake News. He either says Fake News or ‘much of the media’ when talking about this.

And I’ve definitely avoided deploying “enemies of the people,” which has a particularly grotesque history. The first recorded usage seems to have been in the Roman Empire. The Roman senate declared Emperor Nero hostis publicus in A.D. 68. [snip irrelevant history lesson]

Here are some quotes from Trump to show that (a) he did not say ‘enemies’ and (b) it was not about the media, but about Fake News or ‘much of the media.’ 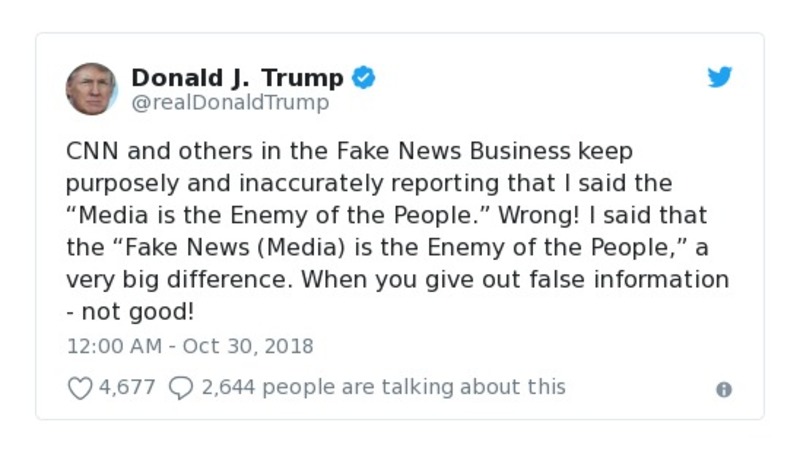 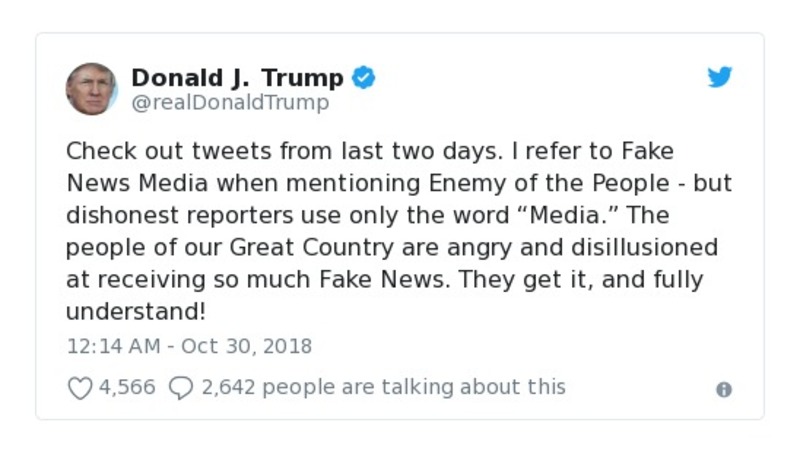 Check out tweets from the last two days. I refer to Fake News Media when mentioning Enemy of the People – but dishonest reporters use only the word “Media.” The people of our Great Country are angry and disillusioned at receiving so much Fake News. They get it, and fully understand!
Oct 29 ’18 @ 2:14 am EDT

There is great anger in our Country caused in part by inaccurate, and even fraudulent, reporting of the news. The Fake News Media, the true Enemy of the People, must stop the open & obvious hostility & report the news accurately & fairly. That will do much to put out the flame…
Oct 28 ’18 @ 2:03 pm EDT

Fox News Interview: “Laura Ingraham Interviews Donald Trump on Fox’s The Ingraham Angle – October 29, 2018″…Well, that’s must be some kind of a sick woman. When I say “the enemy of the people” I’m talking about the fake news and you know it better than anybody. You have news out there that is so fake and I can do the greatest thing ever, North Korea, as an example — we would have been going to war — normal would have been going to war with North Korea….”

WV Political Rally: “Donald Trump Holds a Political Rally in Wheeling, WV – September 29, 2018″…They are truly an enemy of the people, the fake news, enemy of the people. They really are. They are so bad. You don’t even get it. You think like low taxes, you’d think that, like a strong military, no crime, strong borders, they don’t, they don’t. This November 6, you have a chance to reject these disgraceful political hacks, but you can only do it, you got to vote Republican, I mean, we have good people….” 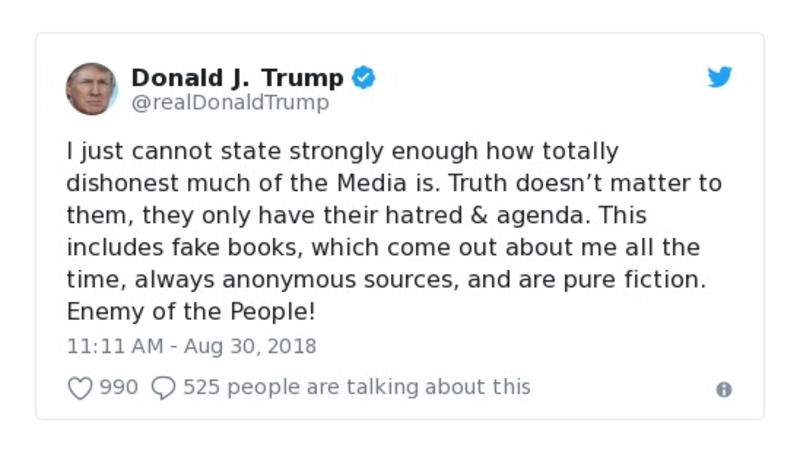 I just cannot state strongly enough how totally dishonest much of the Media is. Truth doesn’t matter to them, they only have their hatred & agenda. This includes fake books, which come out about me all the time, always anonymous sources, and are pure fiction. Enemy of the People!
Aug 29 ’18 @ 1:11 pm EDT 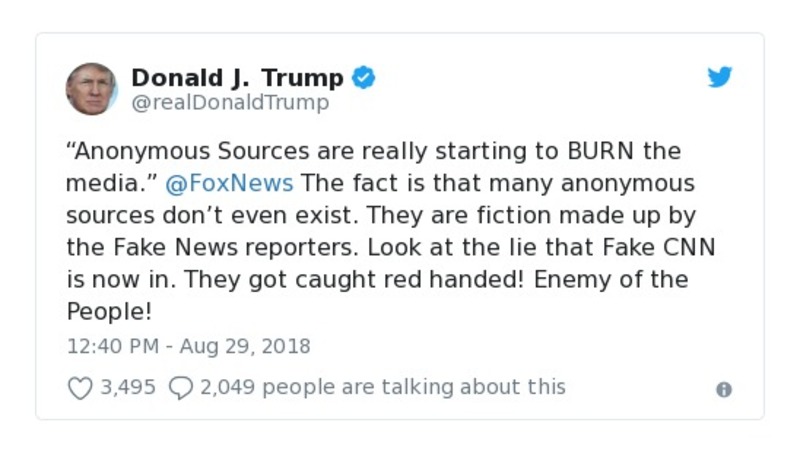 Anonymous Sources are really starting to BURN the media.” @FoxNews The fact is that many anonymous sources don’t even exist. They are fiction made up by the Fake News reporters. Look at the lie that Fake CNN is now in. They got caught red handed! Enemy of the People!
Aug 28 ’18 @ 2:40 pm EDT 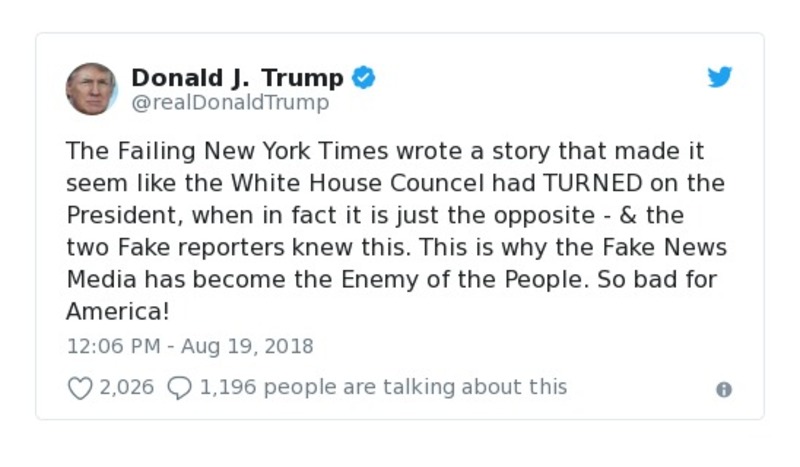 The Failing New York Times wrote a story that made it seem like the White House Councel had TURNED on the President, when in fact it is just the opposite – & the two Fake reporters knew this. This is why the Fake News Media has become the Enemy of the People. So bad for America!
Aug 18 ’18 @ 2:06 pm EDT 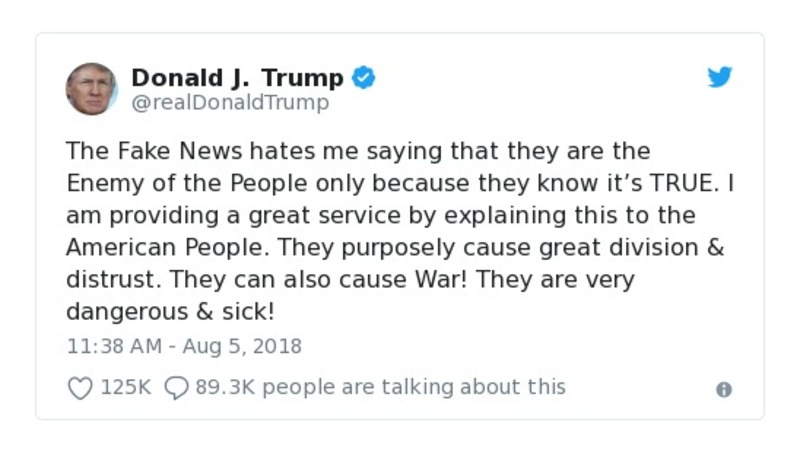 The Fake News hates me saying that they are the Enemy of the People only because they know it’s TRUE. I am providing a great service by explaining this to the American People. They purposely cause great division & distrust. They can also cause War! They are very dangerous & sick!
Aug 4 ’18 @ 1:38 pm EDT 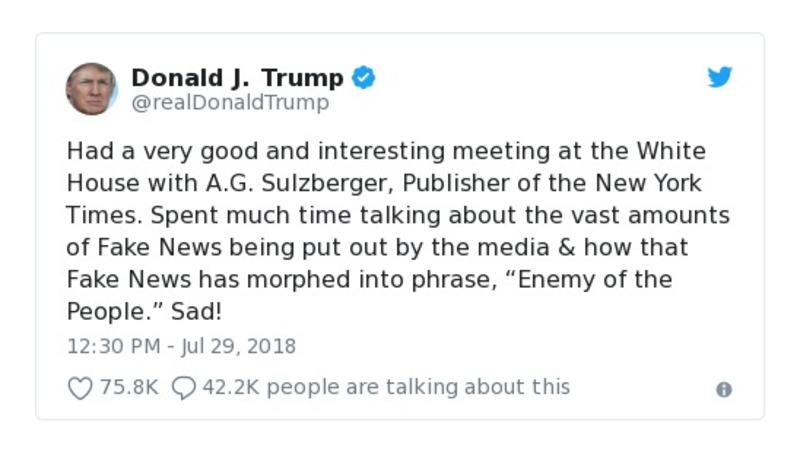 Had a very good and interesting meeting at the White House with A.G. Sulzberger, Publisher of the New York Times. Spent much time talking about the vast amounts of Fake News being put out by the media & how that Fake News has morphed into phrase, “Enemy of the People.” Sad!
Jul 28 ’18 @ 2:30 pm EDT

Hardly a good look for the president of the United States.

It’s hardly a good look for you to refuse to quote your President accurately while attacking him with lies and misinformation. That is what makes you Fake News.

Trump’s rhetoric about immigrants and others appalls me.

Fake News’s overwhelming support for criminals, illegal immigrants, mob violence, and invasions appalls the American public and the world. You are unscrupulous and despicable, and you have the gall to attack your President in this condescending manner, just because he wants to make America great again. Shame on you!