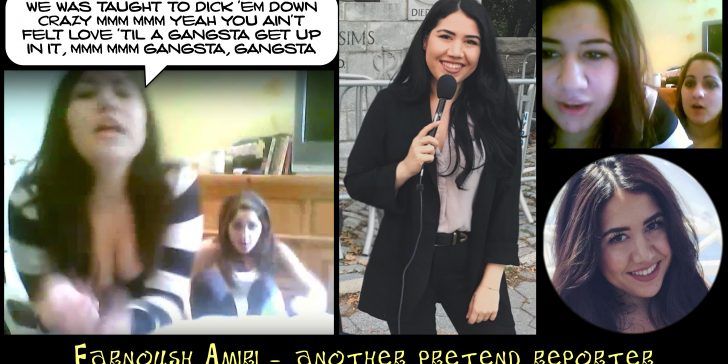 When you see an NBC political article you assume it must be written by a mature reporter or columnist, and for many readers or viewers, this goes without saying. For decades political news or opinion was handled by adults with a good knowledge of the world, and many were older adults, with gray or white hair. Many were balding and close to retirement. Nowadays many Fake News anti-Trump organizations assume that you will never check on their writers, so they go ahead and use anyone. The only qualifications required are bachelor’s degrees, which are a dime a dozen, and a hatred for President Trump. Having parents from a third-world country will help, and being female an added plus.

Here is a great example — an article put up today, just days before the midterm elections, to sabotage Trump, at NBC News. The article is not worth reading. Stooges funded by Leftist billionaires like to file frivolous and false lawsuits against Trump for predictable reasons; to slow him down and lose him votes before an election.

The Left does this routinely. It provides bad publicity just before Election Day in a bid to destroy some of Trump’s votes. What is interesting though is to scroll down to the bottom to see that it says, “Farnoush Amiri contributed.”

In the following video, you’ll see excerpts of Farnoush Amiri and her friend dancing in her bedroom, discussing n*****s and sand n*****s, and why they should be allowed to say n*****s, and how they want to be shot by n*****s. They shake their breasts, twerk, and yowl like cats. The original video is here*, on Amiri’s YouTube channel.

Did NBC think they could hire such bimboes and nobody would notice?

Farnoush Amiri gained a bachelor’s degree in journalism from San Francisco State University. In my opinion they should rename the course to Communism 101. I do not believe the degree is worth the paper it is printed on. Farnoush and her family are Iranian Americans. There are thousands of illegal Iranians in the States, and many have anti-Trump brats resembling those in the video. If they behaved that way in Iran would they not be stoned to death? Yet many badmouth the POTUS and vote for Socialists. What did Trump say about sh*t-hole countries?

Here is some advice Farnoush Amiri once gave:

* Always have earphones with you. Sometimes life sucks and tuning out the world can really make a difference.

* Sing. In your car, on the train, in class, while walking to the grocery store, in the corner at a party; no matter where you are, sing, it will soothe your soul.

* Take pictures of everything. Every moment, no matter how big or small, you’ll want to remember it, I promise. Don’t feel shy; ask strangers to take pictures of you and even join in them.

* Getting into clubs, bars, buying alcohol is not the top of your priority anymore. Embrace this; it’s a good thing.

Here is my advice:

*Update – February 28, 2019
Farnoush deleted the videos mentioned, from her YouTube channel, and I received the following email from her today, threatening legal action unless I remove this article. She wrote:

I am reaching out to you to kindly request you remove this inaccurate, slanderous and abusive content that you have published about me. I would like to avoid legal action and be able to resolve this between the two of us. Please remove it immediately.

The video above was initially hosted on Dailymotion. It was deleted from their server, I assume due to a complaint by Farnoush. I have uploaded it again on a different server; one that will not be bullied so easily.

In the first edition of this article, I commented on other videos Farnoush made, and I described the activities going on in them. Today I see those videos have also been deleted. Since they are gone, I will remove the description of them. In case Farnoush deletes her page at San Francisco State, a screenshot may be seen here.

Lefties have made it clear they love to censor opposing views. Farnoush wanting to have the video I uploaded eliminated, and this article deleted, is a good example. They can dish out the criticism but hate being criticized themselves.

Your assignment this week Farnoush, is to study the First Amendment. If you publish anti-Trump propaganda and silly videos, you can expect to be criticized. Deal with it.

Also, you whine about “being entitled to hate the U.S. if you want to.” Consider how much you would hate Iran if you were living there instead, where you would be imprisoned or stoned for much of the behavior you take for granted. Your father brought you to the United States to get away from that murderous medieval regime, where they treat women worse than dogs, and there is no such thing as liberty. How dare you treat Americans – the people who saved your miserable butt from an awful life – with contempt?