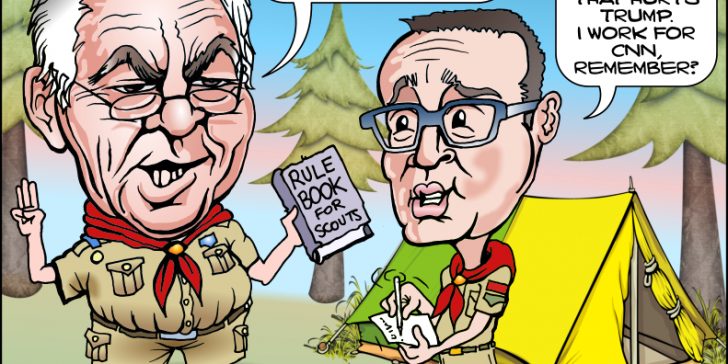 Donald Trump’s former Texan secretary of state, Rex Tillerson, was a scout. His father was a scout too. In fact, his father, Bobby Joe Tillerson, was an executive of the Boy Scouts of America, so I guess it was a given that Rex, who was named after Rex Allen, a cowboy actor, would follow in his steps. The 66-year-old learned as a scout to respect his elders, his country, and his President.

On Thursday night in Houston, Rex Tillerson spoke with Bob Schieffer from CBS. During the interview, Mr. Tillerson, who was fired by Trump almost nine months ago, decided to get even. The two men sat on stage in traditional wing-back leather chairs with nailhead trims and wood legs. Bottled water and glasses stood on a small table between them. The two looked mighty cozy in that welcoming, sociable setting. Schieffer asked, “How would you describe Donald Trump?”

The audience laughed, as did Tillerson, a little too cheerfully. What followed sounded to me like a rehearsed, gloating answer. Tillerson said:

Hah heh ha… Well, most of ya probly know, er, know some of this, but, I had never met Donald Trump until the day he asked me to be secretary of state. He acts on his instincts. In some respects that looks like impulsiveness, but, it’s not his intent to act on impulse. Ah, I think he is really is trying to act on his instincts. T’was challenging for me, a-coming from the disciplined, highly process-oriented ExxonMobil Corporation, to go to work for a man who is pretty undisciplined, er, doesn’t like to read, doesn’t read briefing reports, doesn’t… doesn’t like to get into the details of a lotta things, but rather jus’ kinda says, “Look this is what I believe… and, you can try to convince me otherwise, but most of the time you’re not gonna do that…

Schieffer asked, “How did your relationship go off the rails?”

Well, I think, uh, part of it was obviously we are starkly different in our styles. We did not have a common value system. When the Presden’d say, “Well here’s whada wanna do, and here’s how I wanna do it,” and I’d have to say to him, “Well Mr. Presden, I understand whatcha wanna do but you can’t do it that way. It violates the law, it violates the treaty [AUDIENCE LAUGHTER], you know, uh, he got really frustrated. I didn’t know howda conduc my affairs with him any other way than a very straightforward fashion, and I think he grew tired of me bein’ the guy every day tha told ‘im, “Ya can’t do that, and uh, les’ talk about what we can do.”

His grammar and pronunciation started out well but deteriorated as he went on, which to me would indicate the speech was rehearsed. As nerves kick in a person tends to forget the rehearsal and just speak naturally. I thought Tillerson was nervous throughout and why would he not be? For a scout, he was committing a cardinal sin – betraying the  President of the United States of America and Commander-in-Chief of the United States Armed Forces.

So let’s count up the insults. He said or conveyed that Trump:

This sounds like a broken record. It is the tune sore losers play when rejected by Donald Trump. I can imagine how Rex could construe all those things and will provide an example, by replacing Rex Tillerson with another Texan, whose name is Tex Risserlon. He is exactly the same age as Rex, was also a scout, and grew up in Texas. Tex was in the oil business too and even looks like Rex. Here he is with President Trump:

Trump:  Tex, the first thing I need you to do is get those Indians off my back regarding the oil in North Dakota.
Tex:  Yeah, well that won’t be easy. They gotta treaty and want a billion dollars for each Indian before they open their land up to oil companies.
Trump:  I know. It’ll be your job to get that down to a thousand bucks per head and throw in some land for a casino or something. Okay?
Tex:  Nah, I can’t see that happenin.
Trump:  Find a way. We got to get that oil out of the ground. I heard you did great things at ExxonMobil.
Tex:  A treaty is a treaty. I have to respect that. There are rules and reggerlations…
Trump:  Yeah, put in place by Obama to make it impossible to produce oil. That’s why I hired you Tex. Your job is to find a loophole.
Tex:  That’s illegal. That’s breakin’ the law.
Trump:  No Tex – I mean you find a legal loophole. Is that clear? I can’t afford any trouble with any illegal activities. It’s all got to be legal.
Tex:  I appreciate that, so what we can do is fight this in congress. I’ll help you.
Trump:  That’ll take years. You’re supposed to know how to get around those pesky rules and regulations, legally…
Tex:  Well, in a private company it’s different, but this is the government. I have the public looking at me. It could affect my future…
Trump:  Wait. Don’t tell me you only took this job because you want to be President.
Tex:  [blushes] Well, I…, er,
Trump:  That’s it, isn’t it? So you’re not going to do what you did for ExxonMobil after all. You’re just going to be another bureaucrat. Great. I mighta known.
Tex:  Now wait a minute there Donald, are you sayin’ I can’t have ambition?
Trump:  On your own time man. I hired you to do a job.
Tex:  And I’ll do it – it’s just that we gotta go through Congress. I can’t afford to get into trouble…
Trump:  Yeah, because you intend to be the Prez. Well, I got news for you dipstick, you’ll never be POTUS, that I can tell you.
Tex:  Why’d’ya say that?
Trump:  Cos you haven’t got it in you. You might have had a chance if you helped me, but if you’re just another stupid wannabe Prez you can take a hike. I’ll make sure you never get the top job.
Tex:  We’ll see about that.
Trump:  Get out of my sight you idiot.

I can imagine that fictional Tex would have annoyed Trump by existing in the White House for a few months, before being dumped. He would probably find a way to get revenge through Fake News, and no doubt would mumble about how he had to tell Trump what was legal and illegal.

Getting back to Rex Tillerson, how did Fake News react to his little Trump attack? As you would expect – for them it was Christmas already. Take our friend over at far-left CNN, Chris  Cillizza. He believed every word Scoutmaster Tillerson breathed. 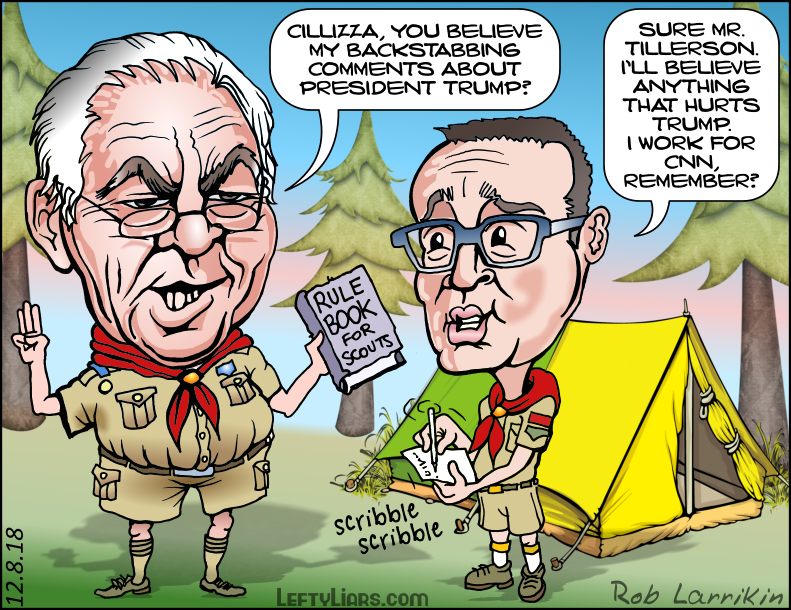 Well, no Chris, Tillerson did no such thing. Here is a question for you. Why do big companies like ExxonMobil retire most workers when they get to 65? Could it be because some people at that age begin to go off? Might it be that some wander off the track into their own little world, to do weird things? That when questioned, become obstinate and set in their ways while doing damage to the company? If you are going to hire a 65-year-old, you will be taking risks. How long will he last? Will he go senile? These are things to contemplate Chris when you write about the next 65-year-old Trump sacks.

Who said this was true, and who said he “had” to tell Trump? Here is another example, using  Tex Risserlon. Pay attention Chris:

Trump:  Tex, people are complaining that your office smells. What the hell are you doing?
Tex:  Oh that’s just the mentholated cream I put on my head for Arthur Itus.
Trump:  Did you look at that agreement we have with China?
Tex:  Yeah, it looks like you’ll have to just put up with it.
Trump:  There has to be a way we can adjust it. Obama was an idiot.
Tex:  Like I said ova and ova, there are rules and reggerlations…
Trump:  There are also loopholes, dim one. I’ve explained it must be legal already.
Tex:  Loopholes are illegal. That’s breakin’ the law.
Trump:  God give me strength. I know you were smarter than this. You must be going senile.
Tex:  Sticks and bones.
Trump:  It’s ‘stones.’ Seriously Tex, you need to have a brain scan. Maybe that’s not arthritis you have in your head. Maybe it’s Alzheimer’s.
Tex:  Al’s Hymers? Never heard of them. And who’s Al?
Trump:  Get help Tex. Seriously, get help.
Tex:  Get help yourself Trumpy Trump man. You dunno what’s legal and what’s not. Moron. Oops. I didn’t say that. Where’s my cream?

One last bit from Chris Cillizza:

What’s scary about Tillerson’s admission? A few things.
1) Trump either doesn’t know the law or doesn’t care about the law
2) This isn’t the first time we’ve heard of this sort of I-am-the-law, Judge Dredd-like behavior from the President.

Did you catch that? Tillerson’s ramblings scare Chris.