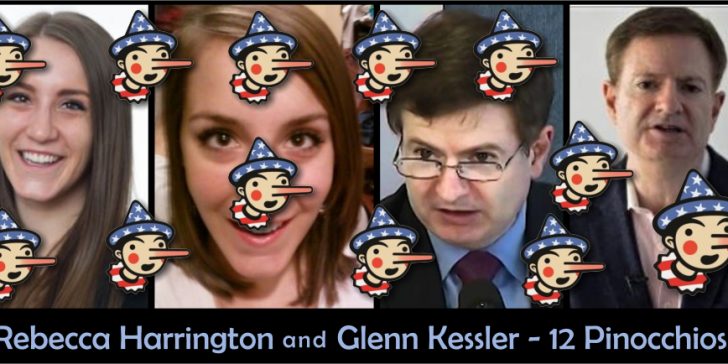 It appears that The Washington Post and Business Insider magazine endorse the idea that Trump should organize his schedule according to what thugs and murderers do. Under the heading, “Trump hosts campaign rally in Illinois after mass shooting at Pittsburgh synagogue and week of bomb scares,” Rebecca Harrington, of businessinsider.com, wrote Saturday [emphasis mine]:

“Following a week of tragedy, chaos, and fear, President Donald Trump took the stage in Illinois on Saturday night for another one of his raucous campaign rallies.”

“Raucous,” according to the Merriam-Webster Unabridged Dictionary, means disagreeably harsh or strident, and boisterously disorderly. Implying that Trump was somehow complicit, Harrington sneered:

“The rest of the week, the nation was gripped by bomb scares as prominent targets of Trump’s ire, from former President Barack Obama to CNN, received explosive devices in the mail.”

Harrington’s tone made it clear she thinks Trump should not have gone ahead with his rally, which means that she, and her employer, Business Insider, are of the view that thugs and terrorists should dictate by their actions, the activities of the President. If they bomb and murder, Trump should cancel his rally. What a strange way to run a country that would be – to let murderers be in charge.

Then there is Glenn Kessler, so-called ‘Fact-Checker’ of The Washington Post, who forgot to check his facts Saturday as he misquoted and smeared his President. His Fake News post can be seen here.

I begin with what Trump said at his rally in Murphysboro, Illinois – October 27, 2018. The video is here. The red part shows the portion covered by Kessler [emphasis mine]:

Under Republican leadership, America is booming like never before, because we are finally putting America first [applause] and because we put America first, I had a big decision to make. I just spoke to the Future Farmers of America, [applause] in Indianapolis, and with what happened early today, that horrible, horrible attack in Pittsburgh, I was saying maybe I should cancel both, this and that, and then I said to myself, I remember Dick Grasso, a friend of mine, great guy, he headed up the New York Stock Exchange on September 11th, and the New York Stock Exchange was open the following day he said, and what they had to do to open it you wouldn’t believe — we won’t even talk to you about it, but he got that exchange open. We can’t make these sick, demented, evil people important [applause].

With what happened early today, that horrible, horrible attack in Pittsburgh, I was saying maybe I should cancel both this and that. And then I said to myself, I remembered Dick Russell, a friend of mine, great guy, he headed up the New York Stock Exchange in Sept. 11th, and the New York Stock Exchange was open the following day. He said — and what they had to do to open it you wouldn’t believe, we won’t even talk to you about it. But he got that exchange open. We can’t make these sick, demented, evil people important.

After leaving out the first part of the paragraph, Kessler started his quote halfway through a sentence, used a capital letter so you would not know the sentence was cut, instead of ellipses. He then put “Russell” in place of “Grasso” and changed, “following day he said,” to, “following day. He said…” which made, “he said” no longer relevant to the first sentence.

Grasso is pronounced “Grusso,” and it sounds like “Russell” to a fact-checker who doesn’t bother to check his facts. What is clear is that Trump is saying that Dick Grasso told him that he would open the exchange on September 12, 2001. 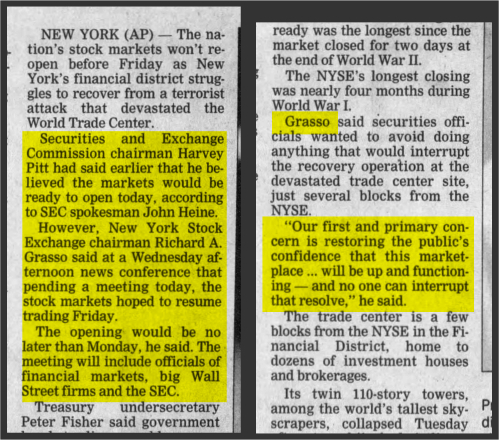 Trump said that Dick Grasso told him on September 11 that he would open the exchange on September 12. Harvey Pitt thought it would be Sept. 13. On the 13th Grasso changed it to Friday 17th Sept. So what is the big deal?

At the time Trump was told it would be the 12th, and he believed it opened on the 12th ever since. So what?

The point Trump made was that just as Grasso did not let the deaths of thousands stop the exchange reopening (he wanted to open ASAP), today you do not let pipe bomb thugs stop you having a rally. Here is a quote from CNN September 17, 2001:

It’s clear that once again Trump was correct and his example was perfectly apt. As for “fact-checker” Glenn Kessler; he had not done embarrassing himself. He went on to write:

While Trump remembered “Dick Russell, a friend of mine, great guy,” as reopening the exchange, it was actually Richard “Dick” Grasso, at the time chief executive of the NYSE.

It seems poor Kessler needs to clean his ears out and pay more attention. Trump did not ‘remember Dick Russell,’ he remembered his friend Dick Grasso. Kessler sneers, “Memories are fallible, even for presidents. This is why they are supposed to have staffs who help make sure they stick to the facts and, if they get it wrong, make sure that the misstatements are corrected.”

You’re supposed to be The Washington Post’s “fact-checker” Kessler, so how about you stop bawling about your 72-year-old President’s ability, and do your job? If you cannot quote him correctly you are just a snowflake with the word ‘journalist’ finger-painted on your forehead. In case you edit your column I have a screenshot here. If you had left instructions for your mischievous editing, it would look something like this: 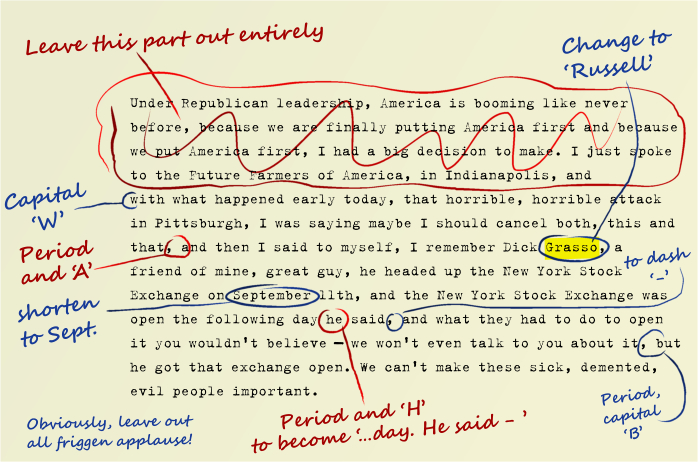 So who are Rebecca Harrington and Glenn Kessler?

Kessler received 20 Pinocchios for three factual mistakes from the People’s Policy Project, here. I’ll give him a few more. As for Rebecca Harrington, she says, “Above all, I want to make science news understandable and interesting to non-scientists.” Yes, Fake News really knows how to pick their political reporters…