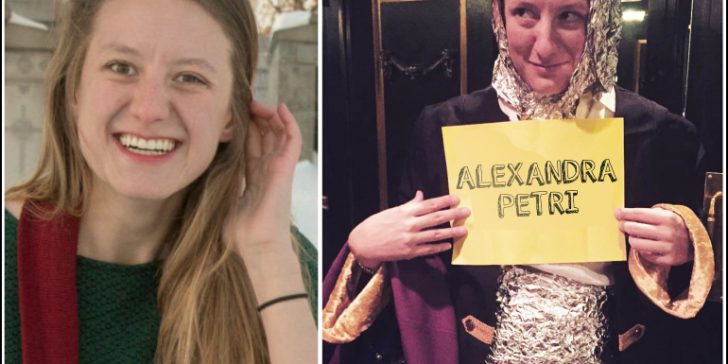 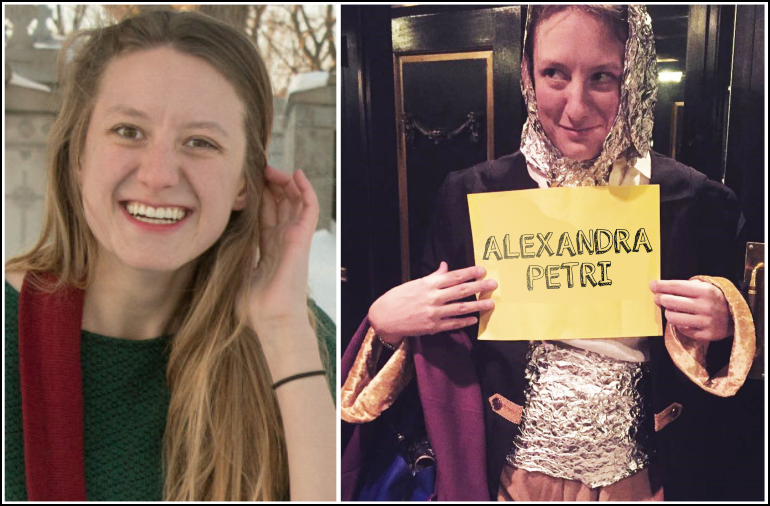 The Washington Post is desperately trying to besmirch President Trump before the midterms, just ten days from now. They do this by distorting his words, changing the meaning of his words, creating nothingburgers, and mocking one of America’s most exceptional, if not the greatest President ever. In their Fake News laboratory, they have shelves that sag under the weight of many baked nothingburgers. These are regularly sampled, but there are also tables covered in Petri dishes harboring the germs of lies they intend to bake up each day.

Yesterday one of their columnists, Alexandra Petri, was ready with her ‘article‘ on Trump. She is supposed to be the Washington Post’s humor columnist. It must be pretty dry humor. Still, she has what any Fake News organization would want in their reporters. Youth and inexperience.

I answer Petri’s effort below. Petri’s text is shown in blue italic indented — my replies are in black. The heading she chose was:

One president’s scary story is a country’s scary world

She began with a photo of Trump sitting in the dark. 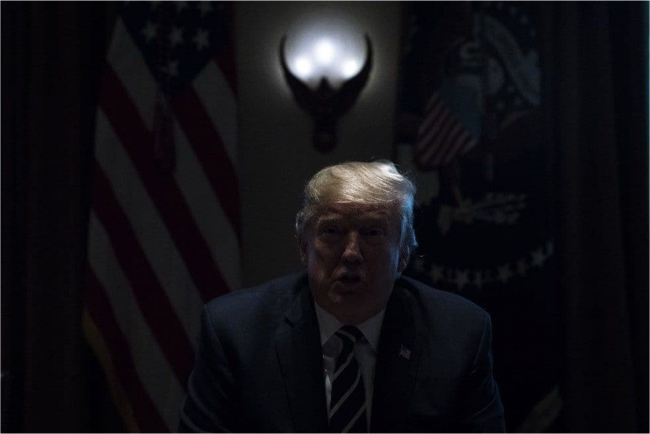 This came from a simple event – during a meeting at the White House, someone accidentally turned out the lights for a moment, seen in this 28-second video. Petri desperately wants to imply that Trump is incompetent or sinister, or both, with this introduction. How intellectual. Petri, have your lights never turned off or burned out? If so, yours must be the only office in America to escape that fate. All hail Alexandra Petri, the Light Bulb Queen of America! She posts guards at every light switch, so this never happens!

Donald Trump, alone of all people on earth, has the luxury of not caring at all what Donald Trump says.

He dwells inside a pasteboard nightmare

No dear; Trump is not the type to be horrified. He is a cool cat if ever there was one. Nor does your POTUS naively think everything is twenty times larger than life. He has grown up in a wealthy family where everything was larger than life. He bought and sold skyscrapers, remember? What have you sold, young one? An old car? No, I think it is YOU who finds working for the Washington Post to be much larger than life in the sticks. It sounds like that little bit of power has gone to your head. I would calm down and learn to respect your elders if I were you.

Hillary Clinton is an enormous spider presiding over untold conspiracies;

Hillary Clinton’s corruption is well documented. Being an NPC drone, you would never have read any of it. You may search for it here on DuckDuckGo. Forget Google since they provide biased results.

a caravan full of “Middle Eastern terrorists” is making its way to the border;

See the definitions of ‘caravan,’ ‘mob,’ and ‘invasion,’ here, and learn to tell the difference. The invading mob is unquestionably full of criminals, terrorists, and the scum of society. They are not hard to recognize providing you have your Coke Bottle glasses on.

he is being hunted by witches,

Once again, DuckDuckGo is your friend.

He invents this world.

You clearly invent yours.

The scariest thing about Donald Trump is that he thinks none of this is real. Someone has punched a protester at his rally? It is some clever trick, fodder for a morning show. It is all done with wires and camera angles, something like the WWE. No one’s indignation is real, least of all the press’s. Those protesters are crying because they have been paid. This was all a sort of game, and the advantage was to the person treating it as such.

When you make allegations, you need to back them up with evidence. You should show how Trump thinks none of this is real. Prove that when he says something is not real, it is actually real. Demonstrate that he believes that nobody’s indignation is real and that he is wrong. You failed to do those things. You cannot find evidence to back your allegations up because they are all false allegations.

Everyone “believes” in climate change. It is man-made climate change Trump scoffs at, and for a good reason. It is a ghost — a myth — like most Weather God religions of the past.

To believe that nothing exists independent of what one hears said about it is a child’s view of the world.

You have just described your own view of the world. After being brainwashed in school and by Fake Media, it is all you can see. You believe nothing exists outside that NPC bubble. 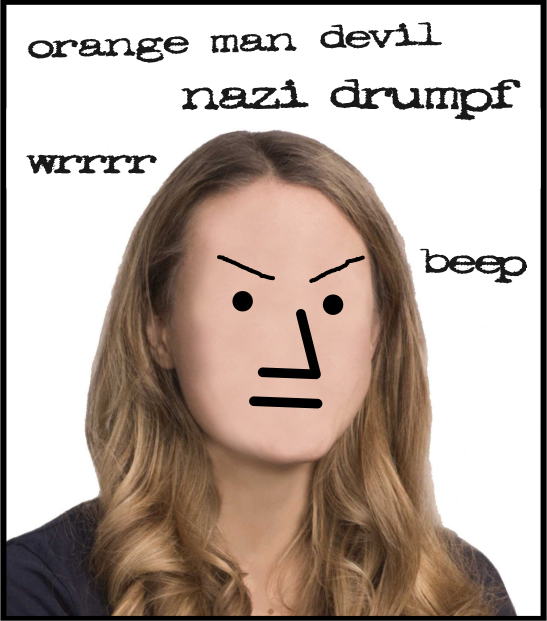 But in Trump’s mind, “Christmas Is Being Erased from Christmas” emerges from the TV

That is a misquote, and it did not ‘emerge from the TV.’ Here is the actual quote, from the 2017 Values Voter Summit, Omni Shoreham Hotel, Washington, D.C. The relevant parts are in red. There was no ‘emerging.’ This was Trump talking:

We are stopping cold the attacks on Judeo-Christian values.  (Applause.)  Thank you.  Thank you very much.  And something I’ve said so much during the last two years, but I’ll say it again as we approach the end of the year.  You know, we’re getting near that beautiful Christmas season that people don’t talk about anymore.  (Laughter.)  They don’t use the word “Christmas” because it’s not politically correct.  You go to department stores, and they’ll say, “Happy New Year” and they’ll say other things.  And it will be red, they’ll have it painted, but they don’t say it.  Well, guess what?  We’re saying “Merry Christmas” again.  (Applause.)

And as a Christmas gift to all of our hardworking families, we hope Congress will pass massive tax cuts for the American people.  (Applause.)  That includes increasing the child tax credit and expanding it to eliminate the marriage penalty.  (Applause.)  Because we know that the American family is the true bedrock of American life.  So true.  (Applause.)

What he said was perfectly valid. The Left has been making Christmas politically incorrect for decades. Everyone knows that — well, humans anyway. NPCs are another matter.

with the same ring of truth and clarity as “A Child Is Being Kept in a Cage.”

That is another misquote. Google the sentence, you won’t find it anywhere but in your article and this reply. What you are probably referring to is when Trump pointed out what Obama did with border children, in this tweet (backup here):

Drudge Report “OBAMA KEPT THEM IN CAGES, WRAPPED THEM IN FOIL” We do a much better job while at the same time maintaining a MUCH stronger Border! Mainstream Fake Media hates this story.

He has been on the other side of the TV too many times to believe what it shows him.

It’s clear to me you are describing your own condition here. Trump watches TV, but he is swamped doing many other things too. Here’s a newsflash Petri dish — all POTUS watch TV. While other presidents were advised it was not ‘presidential’ to admit that, Trump is honest, and sees no reason to hide such normal and often essential behavior. Let me know when the penny drops.

Donald Trump has been standing at a mirror summoning a demon for the past three years.

Wrong again. Your President has been busy restoring America’s economy in hundreds of ways, resulting in record-breaking achievements that you can look up anytime you like. You and your fellow Leftist witches think his historic wins are the work of the devil. What would we expect from Democrat witch-doctors who chant their hexes at him?

For the greater part of his career, Donald Trump was not in a position to create reality with his words.

On the contrary, for the more significant part of his career, Donald Trump was indeed in a position to create reality with his words, and he did so many tens of thousands of times, as all billionaire entrepreneurs do. Here is a 33-year-old Trump in 1980, being interviewed on NBC’s Today show by Tom Brokaw. Listen to his words to see why Brokaw respected him so.

He could say what he wanted — You’re fired!

Yes, he was even able to host 14 seasons of a top-rated reality television program, ‘The Apprentice,’ though he said much more than ‘you’re fired.’ Here he is giving contestants advice.

Trump University will help you succeed!

Fake News made a giant nothingburger out of Trump University, as I explained here. If you have some problem with his university, spit it out. As I say, you need to provide examples of what you are rambling on about.

But now his words have a power to build worlds.

Do you mean ‘the power’? You are a columnist – perhaps you should spend more time on your grammar. Trump’s words have been misreported by Fake News since he began campaigning in 2015. He is a man of action, not words, and his efforts have made America great again, as he said he would. Now it is just a matter of staying great – something you and the Left want to undo as soon as possible.

He and his “nationalism” are strengthening something distinctly ugly.

Why put quote marks around nationalism as though it is not real? I explained here how Fake News has been attacking the word for decades, and why. Wikipedia describes nationalism as:

…a political, social, and economic system characterized by the promotion of the interests of a particular nation, especially with the aim of gaining and maintaining sovereignty (self-governance) over the homeland. The political ideology of nationalism holds that a nation should govern itself, free from outside interference and is linked to the concept of self-determination. Nationalism is further oriented towards developing and maintaining a national identity based on shared, social characteristics, such as culture and language, religion and politics, and a belief in a common ancestry. Nationalism, therefore, seeks to preserve a nation’s culture, by way of pride in national achievements, and is closely linked to patriotism…

Is there anything wrong with that? The Left doesn’t think so when it comes to their pals China, Korea, Africa, India, the Middle East, Indonesia, or Japan. But when it’s a white country – all of a sudden they think being a Nationalist is ebil and wacist.

He and his “fake news” are undermining a bedrock democratic institution.

Once again Petri, back your allegations up with evidence. You create the Fake News, and yes, it is undermining democracy. You want socialism to replace it, or have you forgotten? Socialism is not democracy the last time I looked.

will have real consequences for people’s safety and welfare.

People are employed again. They have money in their pockets. Law and order are being restored again. Thousands of other significant developments are happening. That will have real consequences for people’s safety and welfare. You may get down on your knees and thank Trump for that.

Now Petri, throw that culture out – it was a bad batch. Try something different. Stop peddling nothingburgers and find a real job. There are plenty out there, thanks to your President.