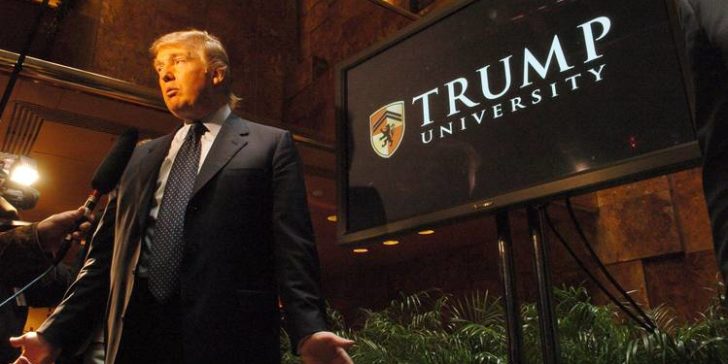 There are swarms of Lefty Lies about Trump University, and most revolve around Trump’s saying that he would hand-pick professors for the university. Let’s undo the Lefty Lies concerning this, once and for all.

Trump claimed that “many of” the university’s instructors were “handpicked” by him. That’s not true. In a 2012 deposition, a top executive for Trump University said that “none of our instructors” was picked by Trump himself.

It also quoted Trump as saying [red emphasis mine]:

There are two points to make about this.

When McDonald’s says, “We hand-select our beef,” we do not assume the owners of McDonald’s go out and select the beef. We presume they send experts. Their “we” and Trump’s “me” are the same thing the experts use and are extensions of themselves. Similarly, Trump will say, “I built the Trump Tower,” which is technically untrue because he didn’t actually “build” it with his hands. By built, he means he had it built by many experts. It is a common dialogue in business, not a lie. It is also a common dialogue in politics, which is why Obama would say, “I gave you Obamacare.” That is technically not true since it took tens of thousands of people to create Obamacare. Obama made not even one page of their website, for instance. However, we accept his “I gave you Obamacare” in the same way we accept McDonald’s, “We hand-select our beef,” because we understand that the experts who did the selecting or building were an extension of McDonald’s, Obamacare, or Trump Tower.

We don’t go screaming “LIAR! LIAR!” at Obama, McDonald’s, or any other business when they speak like this – only Trump – because he is the victim of an unfair attack. There is no lie here unless all people are liars for doing the same thing. For instance, you might tell your daughter, “I got you this car.”

If we want to get technical about whom “hand-picked” what, we’re all liars, not just Trump.

Trump said this and meant it. Many business plans change depending on what eventuates. As a businessman, I have made many plans that changed for various reasons. So even if Trump planned to hand-pick instructors individually and then, for whatever reason, had to appoint someone else to hand-pick them, the question becomes, “Was it a lie, or did he mean it at the time?” If he meant it at the time, and for unforeseen circumstances, things changed, then you cannot assume it was a lie. The onus is on the accuser to prove that Trump deliberately meant to deceive when he said the words. Until they do that, they cannot honestly state it was a lie. So, where is Factcheck.org’s proof? Without it, they have nothing.