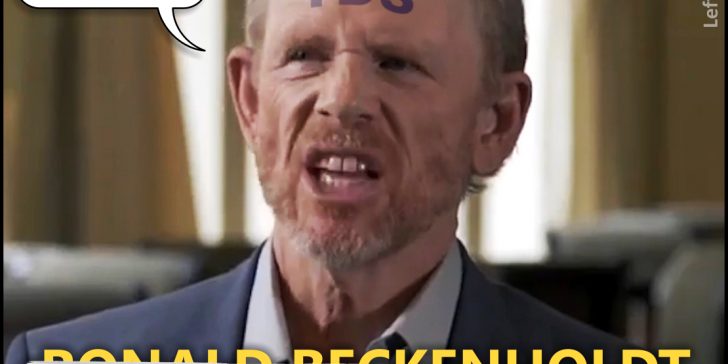 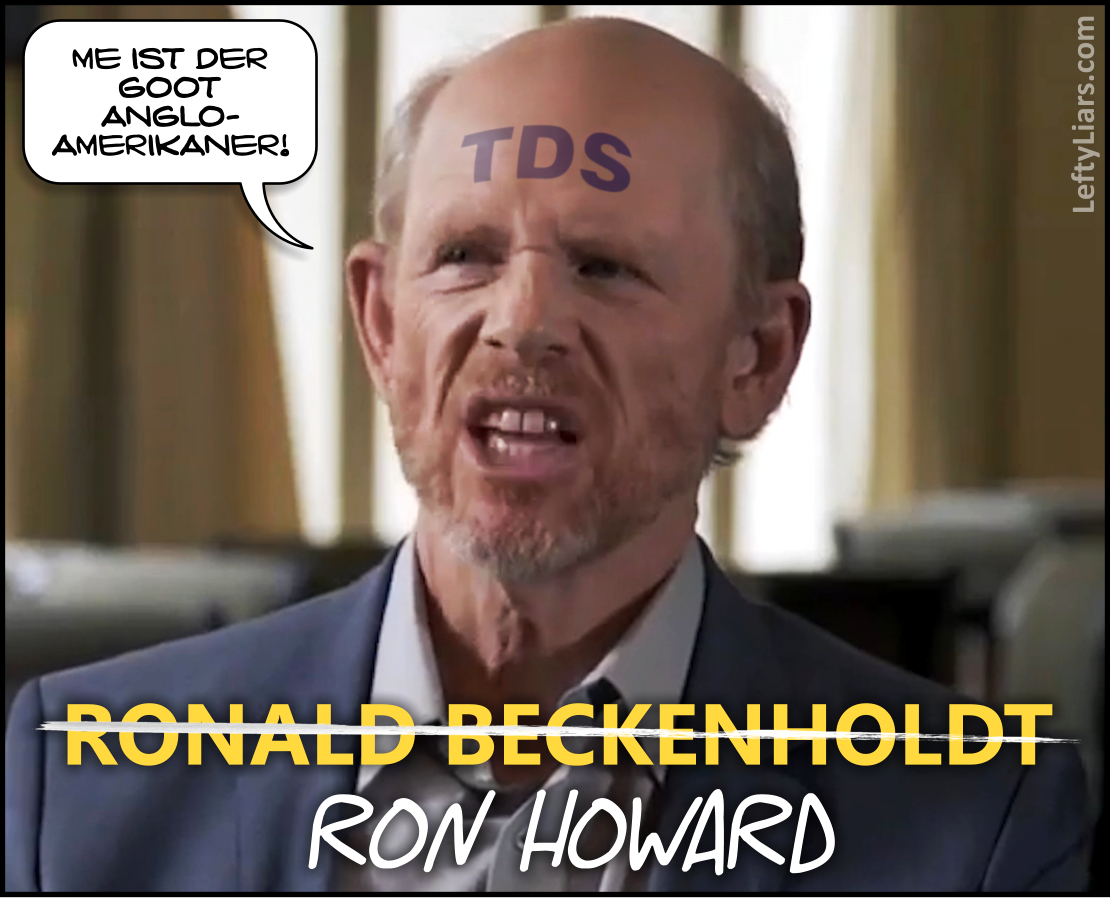 If you look at Ron Howard when he is snarling, you can see the socialist German in him. The 65-year-old actor/director’s first significant acting role was that of young Opie Taylor in The Andy Griffith Show, which aired from 1960 to 1968. Millions of Americans loved little Opie, the all-American boy, and continued loving him as teenage Richie Cunningham in the sitcom Happy Days, a role he played from 1974 to 1980. He was the sweet mama’s boy every parent wanted.

Too good to be true, right?

Howard was a made-up name. His grandfather, Engel Beckenholdt, a farmer, may not have approved when his actor son, Harold Rance Beckenholdt, began going by the name ‘Rance Howard,’ to help his acting career. The elder Beckenholdt might have said, “Vat ist wrong vid ze German name Beckenholdt? Vy replace it vid ze English name, Howard?”
Rance might have replied, “If I keep ze name Beckenholdt, I vill never make it bik in ze movies!”

Actually, they both had American accents, but maybe Rance was right. Ron Beckenholdt. Ron Howard. You can see how US army vets coming back from war with Germany would have preferred Howard. Imagine Opie Taylor as Herr Opie Beckenholdt. The Andy Griffith Show would have flopped after his first appearance. So, Harold, I mean Rance, was probably right to go with the common English name Howard. In any event, he begat Ronald Beckenholdt – I mean Ronald Howard, who everyone thought was a lovely American kid with the harmless Anglo-Saxon name.

Does Ron Howard ever wonder how his life would have been with the German-surname? Would it bother him that most Americans in those days would have preferred not to watch him had they known he was a Beckenholdt? Or would he brush it aside as racist silliness, not to ponder on?

Although Germans are not a separate race from Anglos, they are a different ethnicity and have different characteristics in the same way Alsatians are different from Border Collies. Some say Germans are angrier, sterner and have less of a sense of humor than Anglos, but in today’s world of hurt feelings and poutrage, such people must be wrong, surely.

It is strange though that the same people would be poutraged if someone sold an Alsatian as a Border Collie. They would boil such a criminal in Twitter oil. “How dare you pretend it was a Border Collie when it was an Alsatian,” they would cry. “What kind of monster would do that?”

So what, you say. Who cares if Ron Howard’s father wanted to get ahead as an actor, so he changed his German name to an English one? What’s the big deal?

The big deal is that all that time, Americans watched their perfect son Opie Taylor growing up, and then as Richie Cunningham, a teen, and all the movies he made as an adult, they always thought he was a Howard – with a friendly, Anglo nature. And all along, he was actually a Beckenholdt, with the accompanying angry German character, suffering from Trump Derangement Syndrome.

In the entertainment industry many who have known/worked w/ Trump think that while his reality show was fun and ran a long time, he’s a self-serving, dishonest, morally bankrupt ego maniac who doesn’t care about anything or anyone but his Fame & bank account & is hustling the US

Here is the angry socialist Hun. Here is the sneering anti-capitalist, and like so many poisonous left-winged political views, it came straight from Germany down DNA Drive. If “Ron Howard” believes these far-Left cliched lies about Trump, then he is no better than the socialist Democrats and Fake News who peddle them.

We may assume his father was a *Lefty, and his father before him, all the way back to Germany. Today Germany is led by Angela Merkel, and she is wrecking Germany’s culture by swamping it with millions of Africans for their votes. I suppose Ron Howard Beckenholdt thinks she is doing a swell job. One thing is for sure, if he hates Trump as much as his tweets indicate, he is no Opie, and certainly no Richie Cunningham.
*He bragged about encouraging his 18-year-old granddaughter to appear stark naked in an NYU play, for 15 minutes, and laughed about how he watched her “totally nude” performance.

Aside from this, the man cannot act and is a second-rate director. As with all mediocre left-winged artists, he gets the acclaim, awards, and pandering, but it is all counterfeit. The Left loves to promote their own, regardless of talent. He has about the same creative ability as Stephen King, the Salieri of the literary world. Like Quentin Tarantino, Ron Howard eventually realized he was no actor and gave it up. But unlike Tarantino, Ron’s directing is pedestrian, unimaginative, predictable, flat, and amateurish. With directors like Ron Howard breathing oxygen in movie studios, talented would-be directors have to drive Ubers or deliver pizzas. Do everyone a favor Ron, and let one of those Uber drivers take over. You would be more suited to gardening and model making.