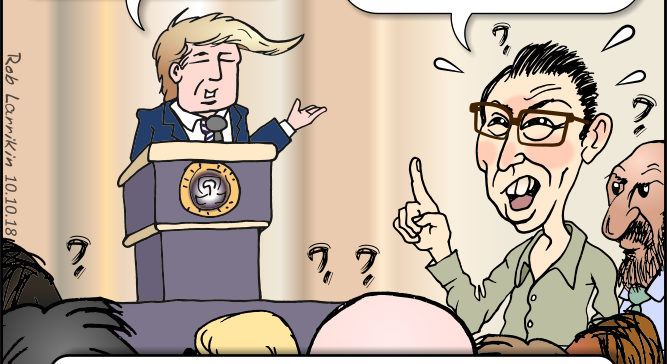 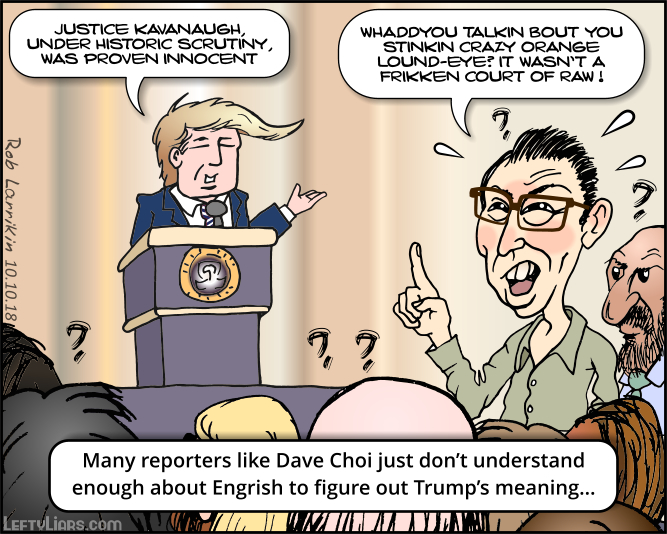 Donald Trump held a ceremonial swearing-in of SCOTUS Justice Brett Kavanaugh yesterday, during which he apologized to Brett and the entire Kavanaugh family for the terrible pain and suffering they had been forced to endure. The problem is that reporters could not report the facts because they did not understand enough English.

You sir, under historic scrutiny, were proven innocent.

After saying this to Kavanaugh, Trump was attacked for using the word ‘proven,’ by all the usual suspects. They screeched and whined about it being a lie because there was no court case. Take this article by Dave Choi from BusinessInsider.com, for example. Korean/American Choi wrote:

Trump claimed Brett Kavanaugh was ‘proven innocent’ of claims he sexually assaulted Christine Blasey Ford, but he was never on trial … the proceeding was not a trial, and no verdicts were rendered.

It appears that Choi does not understand the subtleties of the English language well enough to report on Trump’s comments or speeches.

Firstly, one need not be ‘on trial’ to be accused and proven innocent. One neighbor might accuse me of theft while another neighbor admits to the robbery thus proving me innocent. No law court is involved because “proof” is not confined to courtrooms.

Secondly, Brett Kavanaugh was indeed proven innocent in the kangaroo court he was dragged through. His accusers had no corroborative evidence and were clearly shown to have concocted a pack of lies to sabotage his nomination. Anyone defending them should hang their heads in shame.

Dave Choi calls himself ‘Choibboy,’ and his Twitter page shows him as a Korean boy of about nine or ten, attending some kind of school ceremony in South Korea. I assume he is an immigrant then, and that English is his second language. I guess his parents would speak fairly broken English. He says he was 18-years-old when the Iraq war started, which makes him about 33-years-old today. Yes, folks; another anti-Trump, immigrant millennial reporter.

Choibboy makes fundamental mistakes because he is not familiar enough with the complexities of English. He thinks that if Trump says someone was proven innocent, that Trump must mean they went to court. That’s incorrect, Choibboy. Please learn all twelve definitions of the word ‘prove.’

Prove
verb
1.  to establish the truth or genuineness of, as by evidence or argument:
to prove one’s claim.
2.  Law. to establish the authenticity or validity of (a will); probate.
3.  to give demonstration of by action.
4.  to subject to a test, experiment, comparison, analysis, or the like, to determine quality, amount, acceptability, characteristics, etc.: to prove ore.
5.  to show (oneself) to have the character or ability expected of one, especially through one’s actions.
6.  Mathematics. to verify the correctness or validity of by mathematical demonstration or arithmetical proof.
7.  Also proof. Printing. to take a trial impression of (type, a cut, etc.).
8.  to cause (dough) to rise to the necessary lightness.
9.  Archaic. to experience.

verb (used without object), proved, proved or prov·en, prov·ing.
10.  to turn out:
The experiment proved to be successful.
11.  to be found by trial or experience to be:
His story proved false.
12.  (of dough) to rise to a specified lightness:
Leave covered until it has proved.

Out of the twelve definitions, you need the first one. Here it is again:

Notice that there is nothing there about law courts or court cases!

So who is this Business Insider knucklehead, Choibboy?

Why does Fake News use such people as reporters? Is it because older people with better English skills refuse to write silly nonsense?