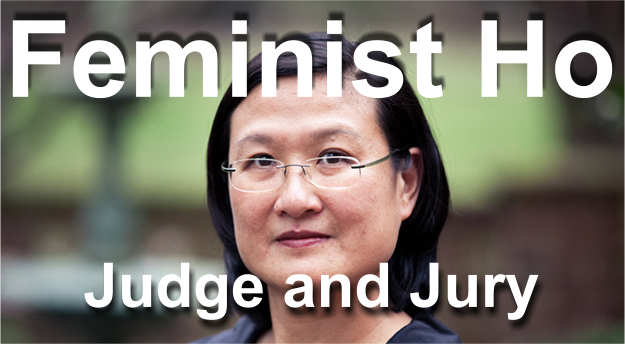 Not satisfied with their attempt to destroy a SCOTUS and his family, the Left is now nominating their attack dog, Christine Blasey Ford, for a distinguished alumni award at her alma mater. Professor Jennifer Ho at the University of North Carolina at Chapel Hill recommended Ford, who was a student at the public university in 1988.

Jennifer Ho, a far-left English professor, decided she was the judge and jury in Judge Brett Kavanaugh’s case, declaring that Christine Blasey Ford “told the truth” about the alleged sexual assault. She went on to say that Ford should be awarded for it, calling her a “survivor.”

In my opinion, neither of these Lefty Liars should be professors, especially in publicly funded universities. To understand why this is true of Christine Blasey Ford, I think Professor Janice Fiamengo, of the University of Ottawa, says it well:

Jennifer Ho, the so-called “English professor,” wrote a book about another Chinese American writer, Ren Bi Lian (aka Gish Jen). The book, Understanding Gish Jen, may be viewed here. When I scroll down to Chapter One and read the first three paragraphs, I see the following errors:

1. ‘world making’ is missing a hyphen.

3. ‘Specifically’ requires a comma after it.

4. The sentence ending in ‘…three girls and two boys’ requires a comma after girls.

5. The introductory phrase ‘In the fifth grade Jen had her’ requires a comma after grade.

6. The sentence starting with ‘Jen’s trademark wit and comic sensibility’ contains three words or phrases that require separating. It needs a comma after ‘and.‘

7. In the sentence that contains ‘she was enrolled in English 283, a legendary prosody course taught by’ the noun ‘course’ might combine better with an adjective other than ‘legendary’ – for instance, ‘notable.’

In the second paragraph, she mentions Gish’s suburb and its lack of a Chinese and Asian American presence, making it impossible for Gish to follow her ambition. The goofiness does not end there. In the second paragraph, Ho brings up the reason for Lillian Jen changing her name to Gish Jen, mentioning the ability to “rename and remake yourself into an identity that you choose versus one bestowed on you from birth.”

The problem is that Lillian Jen was merely an English “sound-alike” of the name bestowed upon her at birth. Her Chinese parents called her 任 璧 蓮. The first Chinese character is the family name, ‘Ren,’ while the second character means Jadestone, and the third means Lotus flower. To Romanize the Chinese characters, you would write Bìlián Rèn. Average Americans would write, Bi Lian Ren. Someone then rhymed it to become “Lillian Jen.”

The Chinese name came first, bestowed upon her at birth. Bi Lian Ren modified her anglicized name further to become “Gish Jen” on a whim. Her Chinese parents would have said, “Bìlián Rèn, what is this “Gish Jen” we keep hearing people say?”

In just three paragraphs, Feminist Ho made quite a few grammatical, factual, and goofy errors. How many would we find going through her entire book? Yet, she is an English Professor.

What does this tell you about university standards today? It says that anyone can be an English Professor nowadays, especially if they are extreme, left-winged, non-white immigrants with poor English skills.

So what do Feminist Ho’s students think of her? On this page, at Rate My Professors, she received critiques and ratings from five students. The comments were as follows [below them, we can check their grammar]:

12/18/2017 – Awful. Professor Ho is a passionate woman who obviously cares about the material, yet she is very rude when she disagrees with you. Made me cry more than once after meeting with her
—-[The intensifier very modifies the weak adjective rude. Consider replacing the phrase ‘very rude’ with a strong adjective like ‘insulting’ to sharpen your writing. The last sentence is not complete. Try starting it with ‘She’ and ending it with a period.]

05/11/2017 – Awful. This class was so unorganized and such a pain to try and do well in. This class barely had any grading criteria in order to not “hinder creativity”, but this will NOT work to your advantage. If you don’t do well, you don’t understand why. It took MONTHS to get grades back, and the professors didn’t even know what the final was gonna be until LDOC.
—- [The comma after creativity needs to be inside the quotation marks. The phrase ‘in order to’ is too wordy. Replace it with ‘to.’ ‘Going to’ should replace ‘gonna.’ Writing NOT and MONTHS with capitals may come across as shouting. Consider emphasizing this information with bold instead: not & months. Replace the abbreviation LDOC with ‘the last day of classes.’]

12/07/2016 – Awesome. Dr. Ho a very straightforward person and it might take some time getting used to her personality. However, I personally grew to appreciate her bluntness and have a great deal of respect for her. She truly cares about her students and the material she teaches. Awesome class and an even more awesome lady.
—-[You require a verb or conjugation like is or was after ‘Ho.’ The word Awesome is often overused. Consider using a more specific synonym, like ‘excellent’ to improve the sharpness of your writing. In your case, you used Awesome twice – and three times if you include the rating. If you do have to use the word, try limiting it to one time. The phrase some time getting should be some time to get. The last sentence is fragmented. Since the adjective awesome is not modifying a noun, and since no subject or predicate is expressing a complete thought, you should add words like ‘I remember an’ or similar.]

05/05/2010 – Awesome. Dr. Ho broadened my understanding of the texts. She doesn’t suffer fools gladly, but she’s an excellent teacher if you WANT to be taught.

11/29/2009 – Average. She is a very difficult professor for a first year seminar. I think that she tries to help but is difficult to approach.
—-[It appears first year is missing a hyphen. The intensifier very modifies the weak adjective difficult. Consider replacing the phrase a very difficult with a tough or a challenging to employ a strong identifier.

Today our Universities are infested with feminazis and socialists. My advice to parents is to home-school your children and avoid sending your teens to college. They have all turned into propaganda factories. If you let your kids go, man-hating hags like Christine Blasey Ford and Jennifer Ho will turn them into morons. All they will learn is how to vote for Democrats and tear down American values.

So who is this knucklehead, Jennifer Ho, anyway? 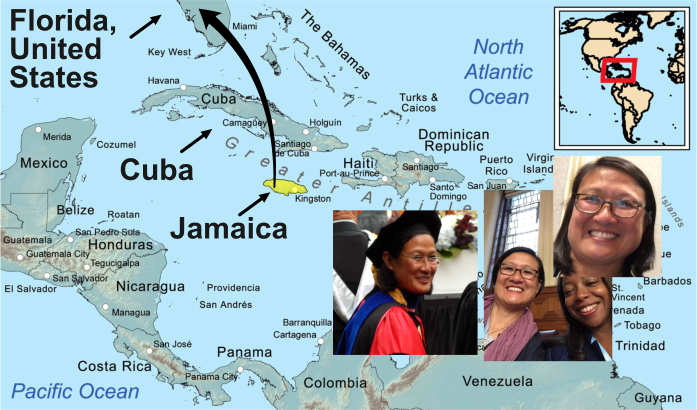 The daughter of a refugee father from China and an immigrant mother from Jamaica, most of Ho’s interests are to do with race. I think English is the very least of her concerns.