On the last day of the year, Politico decided to build a brand new lie about President Trump, over the grave of one of their old lies. They would end 2018 with a graphic categorizing all of Trump’s tweets during the year on this page. The tweets would be sorted by a team including Beatrice Jin, Katelyn Fossett, Isabel Dobrin, Emily Goldberg, Alena Sadiq, Judah Taylor – and look, one man, Brent Griffiths – into two groups: promoting or attacking.

Looking at the page, you can see how girly it is. We see an effeminate graphic with baby pink and baby blue little bits arranged in a soft, dainty way, and they seem to have little purpose. Most men would scratch their heads and say, “So what if half his tweets were attacking and half were promoting? He’s a politician/businessman. What else would his tweets be doing?”

It is as if Politico’s feminist nutters Beatrice, Katelyn, Isabel, Emily, Alena, and Judah are “tattling” on the President for being a President, as though it is a great secret. Thanks, girls but his tweets make it clear by themselves – it never was a secret!

The picture was supposed to change in some relevant way as one scrolled down the page, but they managed to stuff that up too, apparently not employing enough men to figure out the coding – at the time of writing, anyway.

As a result, it is just a confusing mess, and to top it off they began the article with a lie they have published before in the form of a misquote. The article began with this [highlight mine]:

“Don’t worry,” Donald Trump reassured voters of his pungent Twitter feed during the 2016 campaign. “I’ll give it up after I’m president. We won’t tweet anymore. I don’t know. Not presidential.”

Trump did not say the two sentences, “We won’t tweet anymore. I don’t know.” He said one sentence; “We won’t tweet anymore, I don’t think.”  There was no period after ‘anymore.’ Adding a period meant that his single sentence became two. Fake news could then treat, “We won’t tweet anymore,” as a single statement, which it is not. The last three words matter. They change it to a ‘maybe.’ For those dimwits who think changing a word is insignificant, let’s see how they feel when their bride at the altar says, “No,” instead of, “Yes.” It’s only one word, right?


You can see Trump’s statement about his tweets during his campaign rally in Warwick, RI, April 25, 2016, in this video, at the 8:00 minute mark. Here is the word-perfect transcript [highlight mine]:

You know I tweeted today, @realdonaldtrump, I tweet, and that – you know it solves the… [someone yells something]… don’t worry I’ll give it up after I’m President, we won’t tweet anymore, I don’t think. Not Presidential, but let me tell you, and I said, it takes two long time politicians, right, two long, to beat – except they’re way behind, if you add up the both votes, and if you add up the vote delegates they’re way behind me so it doesn’t matter, but it takes two guys; long time politicians to try and get together – to try and beat Trump, and yet they’re way behind and I said to myself, that’s pretty bad. That’s pretty bad. And here’s the key – I’ve only been doing this for ten months! I haven’t even been doing it very long.

Here is the sound file (*volume warning – I turned it up in parts to make it easier to hear).

For those who still doubt that he said ‘I don’t think,’ some media quoted him correctly. You can see a list here and one example, from ABC News:

On the campaign trail, Trump promised to change his Twitter ways. At a rally in April, he told the crowd, “Don’t worry, I’ll give it up after I’m president. We won’t tweet anymore, I don’t think. Not presidential.”
But just this weekend, he reversed course, telling the Times of London that he is keeping his personal account because “I am covered so dishonestly by the press.”

Although Juju Chang, Meagan Redman and Rachel White at ABC News quoted President Trump correctly, saying, “We won’t tweet any more, I don’t think,” they did not understand what ‘I don’t think’ means when tagged to the end of a sentence.

That is because, like most of the girls at Politico, they did not learn proper English in school. Their English teachers were too busy teaching them environmentalism, feminism, socialism, and anti-Americanism to worry about the nuances or grammar of English. They do not understand that adding ‘I don’t think’ at the end of a sentence means the same as ‘maybe.’

Going back in time, if a farmer said to a milk-seller, “There won’t be any milk tomorrow, I don’t think,” it meant there could be milk. A translation is, “At this time I believe there will be no milk, but then again there is a chance there will be,” but twenty words is too many, so an Anglo-Saxon (like Trump’s Scottish mother) would say, “There’ll be no milk tomorrow, I don’t think,” which is eight or nine words. A smaller version would be, “Nay milk th’morra, dinnae think.” Five words. In the cold winters of Scotland cutting speech from 20 words to 5 helped a person preserve calories. In warm tropical climes, abundant in food, people could jabber on at great length and might even burst into a song and dance, while Anglo-Saxons were economical with words.

Back to Politico, now.

Not only did the gaggle of feminazis misquote Trump but they described his tweets as ‘pungent’ which in this sense means “barbed compliments” or “biting aphorisms.” But then they said that more than half of his tweets were promotional. How could they be both promotional and pungent? It appears the girls could not comprehend this contradiction, again because their English teacher was too busy teaching them voodoo politics.

They published the same lie about Trump saying ‘I don’t know’ instead of ‘I don’t think’ a few times over the years. Here they are in 2016 saying the same thing:

“You know, I tweeted today, @realDonaldTrump. I tweet,” Trump said.
He added, “Don’t worry, I’ll give it up after I’m president. We won’t tweet anymore. I don’t know. Not presidential.” 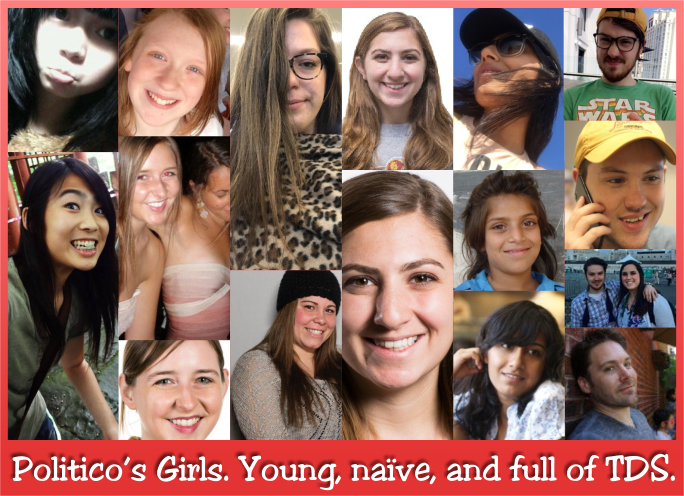 From left to right: Beatrice Jin is fresh out of college with a math major. Apparently, she was still in China in 2011, begging Justin Beiber to follow her. Katelyn Fossett is from Kentucky and has a BA. Yippee! Isabel Dobrin speaks Spanish and has a BA in Latin American Studies. ¡Ay Chihuahua! Emily Goldberg speaks Spanish and has a BA from the University of Southern California – what a surprise! Next along, and second from the right is Alena Sadiq, from Pakistan. She has lived there all her life. Sadiq loves Benazir Bhutto, the communist Muslim who chaired the Pakistani Peoples Party for a quarter of a century. She studied Islamic philosophy and theology. Politico thought they would hire her as an intern. Sweet! Finally we have Judah Taylor. It turns out that Judah was a boy’s name. He is a Kentuckian who likes riding his bike at the National Mall. Let’s see what the girl boy has – of course; a BA.

It is good to know who is writing the news you read.