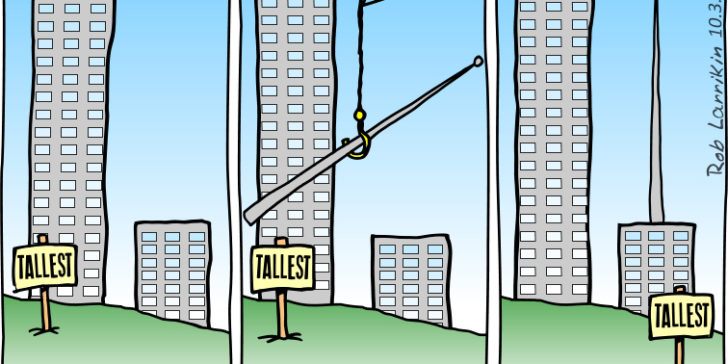 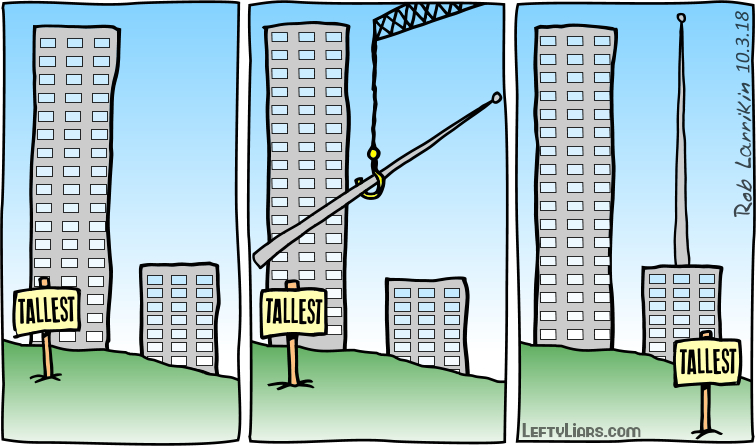 Huffington Post’s Christina Wilkie attacked Donald Trump in this 2016 article (backup here), just a month and 25 days after he became the Republican nominee. Her headline shouted, “Donald Trump’s Brag That He Owned The Tallest Building After 9/11 Wasn’t Even True.”

Republican presidential nominee Donald Trump has been widely criticized for bragging, after the collapse of the twin towers on Sept. 11, 2001, that his building at 40 Wall Street was now the tallest skyscraper in lower Manhattan.

Not only was Trump’s boast despicable, coming as it did just hours after nearly 3,000 people lost their lives ― it was also a lie, according to architectural reports reviewed by The Huffington Post. [Christina probably means reviewed by her]

Trump’s building at 40 Wall Street did not become the tallest building in lower Manhattan after Sept. 11, as Trump claimed in a radio interview with WWOR on the afternoon of the attacks.

Immediately after 9/11, 70 Pine Street, which soars 952 feet into the air, became the tallest building in the area, according to the Council on Tall Buildings and Urban Habitat, an academic and industry working group.

She included a photo of the 70 Pine St. building that no longer comes up on the page, though its caption, in a tiny gray font, still reads:

The spire of 70 Pine Street, center, rises above neighboring structures — including the Trump Building — in New York’s financial district on March 18, 2009.

Ohh… the spire rises above the Trump building. The following quote is from Wikipedia’s list of tallest NY buildings page:

30th-tallest in the United States; was world’s tallest building for less than two months in 1930; formerly known as the Bank of Manhattan Trust Building; currently known as the Trump Building, a more permanent name is 40 Wall Street. Was the Tallest building in New York City before being surpassed by the Chrysler Building. Was the tallest mid-block building in the city from 1930 until the completion of One57 in 2014.

If one takes the spire out of the equation, 40 Wall Street was the tallest building in lower Manhattan after the twin towers came down. Since Christina Wilkie researched this, surely she must have known. Did she mention it in her article, for balance? No. After all, that could make Trump look reasonable. Take a look at the actual interview, video, and transcript here. It was a long interview, and this is only a small part [emphasis mine]:

Unidentified man:  We are having some technical difficulties which is totally understandable when you try to do an ad hoc reporting and getting information to you as fast as we possibly can and making sure that it’s accurate at the same time.

Unidentified woman:  Donald Trump is on the line, and we know him as the man behind lots of real estate in Manhattan and of course, Donald, I understand you were actually a witness to what happened this morning

Trump:  Well, I have a window that looks directly at the World Trade Center, and I saw this huge explosion. I was with a group of people, and I really couldn’t even believe it, and even I think worse than, that for years, I’ve looked right directly at the building. I see the Empire State Building in the foreground and the World Trade Center in the background, and now I’m looking at absolutely nothing. It’s just gone. And it’s just hard to believe.

Alan Moore:  Donald, Alan Moore is here. Your building is, uh, Trump Tower is uh, one of the great tourist attractions in the world. It’s well known universally. Are you taking any precautions there in light of what happened at the World Trade Center?

Trump:  Well, Alan, we’ve always had, as you know, very, very strong security, but there’s very little you can do about planes crashing into a building. I mean, you look at Larry Silverstein is a terrific owner in New York and a very good friend of mine who I just called I was very worried about him because I know so maybe he was in the building he took possession of the building one week ago. As you know, he just bought the World Trade Center. He was in his office that he was getting ready to move into the World Trade Center over the next two weeks. I just spoke to him. There’s nothing you can do when people are going to be bombing planes at you’re building. Well, I guess maybe the world is going to be changing, and maybe you can have F16s flying all over the city, etc., but it’s a pretty tough situation.

Alan Moore:  Donald, you have one of the landmark buildings down in the financial district, 40 Wall Street. Did you have any damage, or did you know what’s happened down there?

Trump:  Well, it was an amazing phone call I made – 40 Wall Street actually was the second tallest building in downtown Manhattan, and it was actually before the World Trade Center, was the tallest. And then when they built the World Trade Center, it became known as the second-tallest, and now it’s the tallest. And I just spoke to my people, and they said it’s the most unbelievable sight. It’s probably seven or eight blocks away from the World Trade Center, and yet Wall Street is littered with two feet of stone and brick and mortar and steel. And there are thousands of people walking over the debris over the Brooklyn Bridge where they’re sending them out over the Brooklyn Bridge to Brooklyn. And then I guess they’re going to have to figure out how to get home from there, but they have between a foot and two feet of debris right in front of a building, that’s probably you would say Allan, six or seven blocks away.

You can see the different skyscrapers in Lower Manhattan on this site. The graphic below shows the actual difference between 70 Vine St. and 40 Wall St. 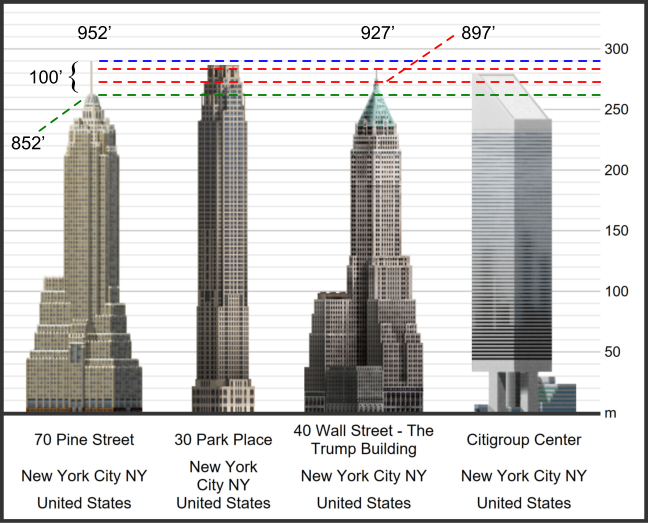 Wall Street is 927 feet tall, while Vine Street is 25 feet taller, at 952 feet. We see here (backup) that the spire on 70 Pine is 100 feet tall. The spire on 70 Wall St. is much shorter. Probably 30 feet when you look at this grab from a video of its construction: 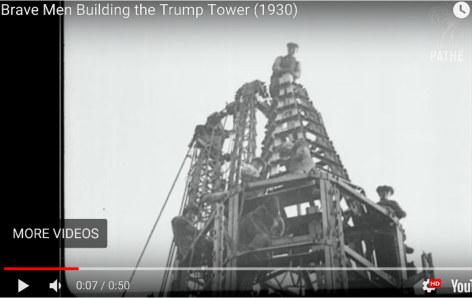 When both spires are removed, and only the buildings themselves are measured, 70 Pine is just 852 feet while 40 Wall Street is 897 feet, which is 45 feet higher. Back in the days when people started using spires to make their buildings bigger, there was much controversy and argument. Many believed the height should not include the spires. Trump was probably one of those since he does not like spires (backup here).

Standing on top of 40 Wall Street, Trump would be aware that he was higher than 70 Vine, not only because he does not include the spire, but because his building is also higher up on the ground. Go here to see a handy topographic map. Place the address in the address box. First 40 Wall Street, Lower Manhattan, New York, NY and then 70 Pine Street, Lower Manhattan, New York. Set the water level at 0.

Floods are significant in Manhattan, as parts of the city are 5 feet below sea level, affecting a building’s price. If you can build higher than the rest, you would consider yourself to be higher, and indeed you would be. Adding these two factors, in Trump’s mind, 40 Wall Street would be 61.4 feet higher than 70 Pine Street.

On the day of 9-11, Donald Trump was a traumatized man. He was afraid his close friend might be dead. Donald observed a tragedy firsthand, just down the road from him. He witnessed two of New York’s most beautiful skyscrapers collapsing after a terrorist attack and knew there were thousands dead. Trump also had to go on, showing no fear and encouraging others. He did radio interviews.
The radio commentator asked, “Donald, you have one of the landmark buildings down in the financial district, 40 Wall Street. Did you have any damage, or did you know what’s happened down there?”
Did Christina Wilkie mention that the interviewer asked Trump? Did she point out that Trump didn’t bring this up; the interviewer did?

What is Trump supposed to say? Is he not expected to be interesting for the radio’s listeners? At the same time, he’s shaken up by the terrible events of the day. Would he respond correctly under the circumstances? Who would? In Donald’s case, he did the best he could and said a few things about 40 Wall Street.

One exciting subject was that it was the tallest building before the Twin Towers were built, and now it would be the tallest again. We can laugh and say he should not have said that, and he no doubt realized as soon as he said it. People make minor mistakes when terrible things like 9-11 happen, and they’re put on the spot on live radio. How would you have responded?

Christina Wilkie comes along 15 years later, just after Trump becomes the Republican nominee, to call him a despicable, boasting liar. Undoubtedly not to influence the election. Surely not for purely political reasons, no. Not because she is Fake News. Surely not. So who is this knucklehead, Christina Wilkie? 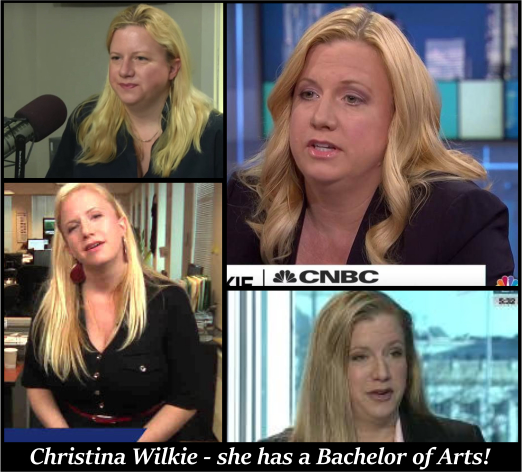 A bachelor of Arts! Wow! She must know a lot about New York skyscrapers. More than a billionaire skyscraper developer would ever know, for sure.