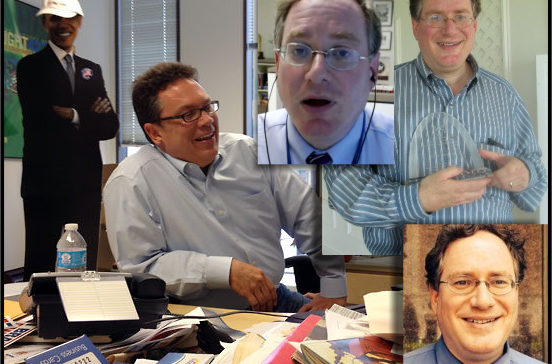 Lefty Liars like to edit quotes to create misinformation malevolently. They do this with Donald Trump quotes each minute of every day. This Politifact.com (PolitiFake) article was written by Louis Jacobson. They like to waffle about a particular Trump statement before summing up their decision under the heading “Our ruling.” Here is what they said in “Our ruling” on the above page:

Trump said, “When I was campaigning, I was talking about 18 and 20 years (when) wages effectively went down. Now, for the first time in a long time, they’re starting to go up for people.”

Wage growth during the two-decade period Trump is referencing was modest, even sluggish, but wages didn’t go down over that period, even accounting for inflation. As for wages finally going up now, they rose for almost three years before Trump took office, so it’s not credible for him to imply that he deserves credit.

We rate the statement False.

Let’s see how they faked this up. Trump held a cabinet meeting at the White House, March 8, 2018. You may view this YouTube from 00:00:42 – 00:03:00 to check the following accurate transcript. Red shows the part PolitiFake used. Bold green shows the words they deleted. Blue shows the important parts they left out:

I’m pleased to report that our very massive tax cuts are continuing to show tremendous results. Ninety percent of American workers are already seeing bigger paychecks, and that number’s actually going to go up. Almost 4.6 million people have received tax-cut bonuses. Wages are rising at the fastest pace in more than a decade, something that people have been waiting for; as you know, when I was campaigning, I was talking about 18 and 20 years, and wages effectively went down. Now, for the first time in a long time, they’re starting to go up for people. We’ve created almost 3 million new jobs since the election. And unemployment claims are at the lowest level in 49 years. Think of that. Unemployment at the lowest level in 49 years. That’s a beautiful statistic… And I’m very pleased to announce that the unemployment rate for women in our workforce is at an 18-year low – lowest it’s been in 18 years. And we’re very close to the all-time record…

As you can see, PolitiFake did not mention ‘fastest pace’, and cut the words ‘effectively’ and ‘they’re starting’ out altogether. They also cut the words “Wages are rising at the fastest pace in more than a decade, something that people have been waiting for, as you know” from the sentence, used a capital ‘W’ to make a new sentence, and replaced and with when. They didn’t mention any of the other points made in that paragraph, thus taking the bit they used out of context. If the reporter, Louis Jacobson, had left instructions for this mischievous editing, it would look something like this: 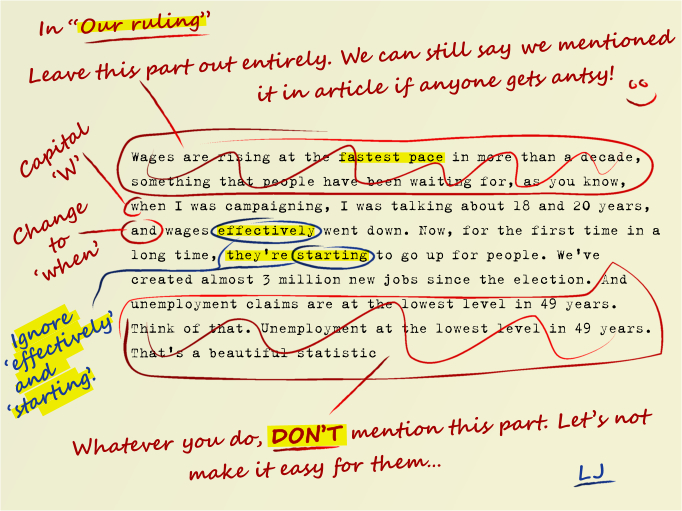 So who is this knucklehead, Louis Jacobson? 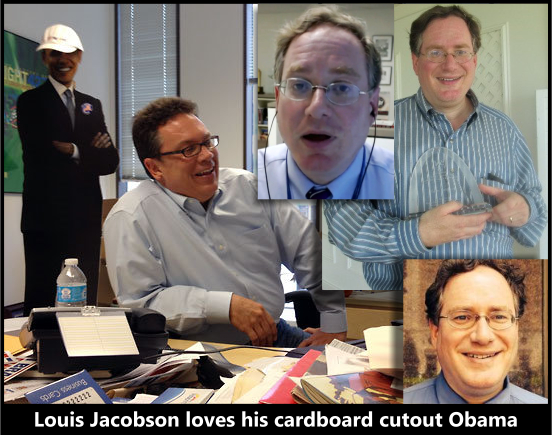 He’s a freelance ‘arts reviewer’ for washingtoncitypaper.com, though they don’t list him as staff, and a “fact checker” for PolitiFake. He likes his art, his food, and his Obama cardboard cut-out.