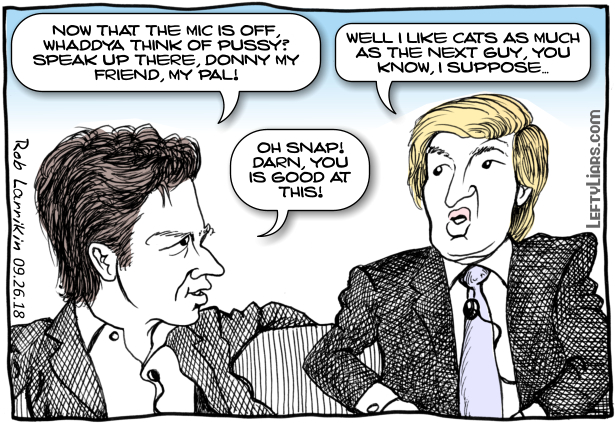 A common lie told by Lefties is that Trump is a misogynistic rapist who runs around grabbing women’s vaginas, against their will, in the street, at any time, and that he thinks this is a great thing to do. I see people on discussion boards describing Trump this way all the time. Just last night, Steve Colbert (pronounced ‘Coal’ ‘Bert’) was sneering at Judge Kavanaugh on The Late Show and said that Trump:

…bragged about sexual assault on tape…

He and other Lying Lefties feel justified in accusing Trump of such things thanks to the smear campaign conducted by NBC, The Washington Post, CNN, and the rest of Fake News, based on the ‘Access Hollywood tape.’ When I explain the event and show the entire transcript, including Billy Bush’s input and details of the tape’s cuts and edits, Lefties usually go as mute as a mackerel. They realize their notion that “Trump said it is okay to grab any woman’s pussy at any time for any reason” is a childish fairy-tale. 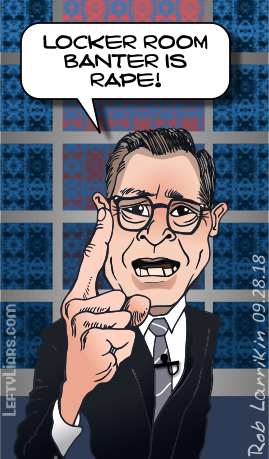 What follows is a summary of the tape’s fundamental details, including the accurate transcript and Trump’s actual words. Below that, I provide an overview of this nothingburger cooked up by Fake News and their cohorts.

In September 2005, NBCUniversal’s Billy Bush conducted a behind-the-scenes interview with Trump, and later, on the tour bus, nobody turned Trump’s shirt clip microphone off. Billy Bush egged Trump on with great enthusiasm, in front of seven others on the bus (including two camera guys, a bus driver, an NBCUniversal producer, a production assistant, a security guard, and a public relations guy). Trump had no idea he was still being recorded. Billy Bush encouraged him by laughing hysterically at everything he said, making many believe he was ordered to make this recording no matter what. NBC secretly held on to the heavily edited tape for eleven long years before just so happening to give it to the Washington Post to publish two days before the Presidential debate between Trump and Hillary Clinton for the 2016 U.S. presidential election. NBC News released its own story mere minutes after the Post story went online. This spying and attempted sabotage of a Presidential debate would blow up in NBC’s and Bush’s faces and help Trump win the election. Fake News might think that such cowardly interference is admirable, but most Americans do not.

An accurate transcript of the relevant part:

Donald Trump: You know, and I moved on her, actually. You know she was down on Palm Beach.
Unknown: She used to be great. She’s still very beautiful.
Trump: I moved on her, and I failed. I’ll admit it.
Trump: I did try and fuck her. She was married.
Unknown: That’s huge news.
Trump: No, no, Nancy. No, this was —

……….[tape cuts something is deleted]………. She’s totally changed her look

And yet, when these sexual pioneers hear some outdated, irrelevant tape of Donald Trump telling a friend he wanted to have sex with a woman, they gasp and guffaw with all the fake moral poutrage they can muster!

The only part of the transcript that can be considered ‘controversial’ is the following:

Let’s break that down, and while we do, please imagine what Bill Clinton would have boasted, thousands of times in his life, to other men, about women, and about his sexual conquests. Imagine what many of the talking heads on TV would have told others of their sexual conquests in the privacy of bedrooms, bars, or buses. Imagine what George Bush declared to his male friends. Imagine what Hillary Clinton stated to her feminist pals about men and sex. Now look at the relatively innocuous murmurings of Trump:

“I’m automatically attracted to beautiful. I just start kissing them.”

We can see from many clips we’ve seen of Donald Trump that he does not “just start kissing” when he meets women, so it’s clear he’s exaggerating, as men and women the world over do when they’re engaging in locker room banter. The woman he desired said no, and he was happy to divulge that his “move” on her failed. Trump showed her some furniture and dropped hints, but nothing came of it since she was married. He accepted the rejection and moved on, as any polite businessman would…

“They LET you do it” means they agree, consent, allow, permit, authorize, grant, admit and entitle you to do it if you are a star. ‘They’ does not mean everyone. It means those that let stars do this. ‘They’ are groupies, gold-diggers, fans, devotees, followers, enthusiasts, fanatics, toadies, worshipers, fan-girls, nymphets, Valley girls, whores, strumpets, shady ladies, forty-niners, parasites, and money-grubbers.

Trump is merely engaging in locker room banter, boasting about what he could potentially get away with because he’s a star. Billy Bush and the crowd agreed and encouraged him.

Would the then 63-year-old Paul McCartney or 62-year-old Mick Jagger disagree with the then 59-year-old Trump? How many thousands of bimbos did they have sex with, because, as Trump says, when you’re a star, they let you do it?

When having sex, adults do many things in the privacy of their bedrooms. There are hundreds of activities and hundreds of ways of describing those activities. Isn’t it interesting that while Chevy Chase, Brad Pitt, or the actresses in ‘Sex and the City’ can use a range of humorous expressions to describe such things, and everyone laughs and chuckles, when a famous New York entrepreneur is spied doing the same, privately, with friends, eleven years in the past, Hollywood goes into Trump Derangement Syndrome? Wow! Their hypocrisy knows no bounds.

I will do a Google search for the words ‘movie scripts with the word “pussy”’ to prove my point. I see a link entitled ‘Trumbo (2015) – Quotes – IMDb’. Ah yes. A Hollywood favorite, concerning their favorite subject – how commies were black banned from Hollywood back in the Fifties. Though there were historical inaccuracies and misrepresentations of people and events, the movie received positive reviews. Lead actor Bryan Cranston received an Academy Award nomination for Best Actor. A favorite and popular American actor, John Goodman, played Frank King, a man who saved blacklisted writer Trumbo by giving him work to write low budget films anonymously. All Leftist Hollywood, from wild-eyed socialist-loving Jim Carrey to loony Meryl Streep, would appreciate Frank King for saving communist Trumbo. Looking at the script, we see Frank King (John Goodman) saying:

I’m in this for the money and the pussy and they’re both fallin’ off the trees.

What did all the Hollywood celebs think when Goodman said that? Oh, it was fine. He’s a great guy, and he’s a Lefty, protecting a commie writer! So what if he talks about pussy? That’s just one example of many. The word pussy is used in movies, books, songs, and by millions of baby boomers all over the Western world. Donald Trump didn’t invent it, but those same baby boomers singled him out because they are hypocrites. They only know how to win political battles by throwing mud and lies at their opponents, to drown out any sensible political debate on the real issues.

Some of them hypocritically complain that he was talking about a married woman. Boohoo!

Sure, Trump was talking about a married woman. In private, without being aware he was being recorded by an NBC spy, who encouraged him by laughing like a ventriloquist’s dummy!

There was also the little matter of the crowd present – seven others aside from Billy Bush, who were continually cackling and guffawing at Trump’s remarks. Why were none of them excoriated or raked over coals for enjoying and approving of Trump’s locker room banter? Why hasn’t NBC been vilified for their shameless and cowardly sabotage of a respectable political candidate?

The event exposed many despicable people. Trump was not among them.

None of these people were saying that Jeff Beck, their toe, and their car were bitches. It meant very well, very much, or very good.

Regarding “moved on her,” any New York businessman in his 70’s will tell you it merely meant he tried to interest her in him. “Making a move” would be buying her a drink, telling her how beautiful she was, asking her out, or kissing her hand. It’s clear that “I moved on her like a bitch” translates to “I tried hard to get her interested in me.”

“I tried hard to get her interested in me.”

So what? We don’t know what the time context was because he didn’t say it. Maybe some of those edits in the tape happened to remove any reference to a time when Trump was single. So what is this big important issue in reality?