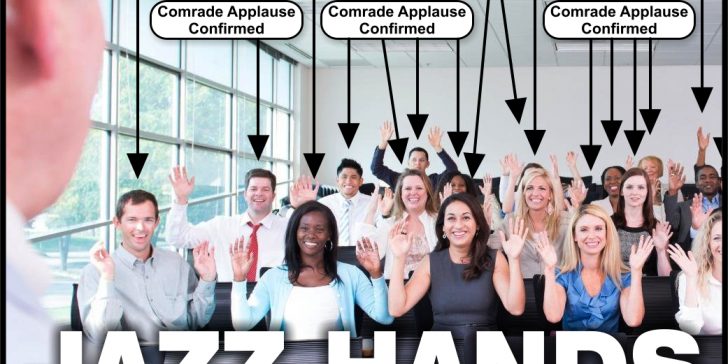 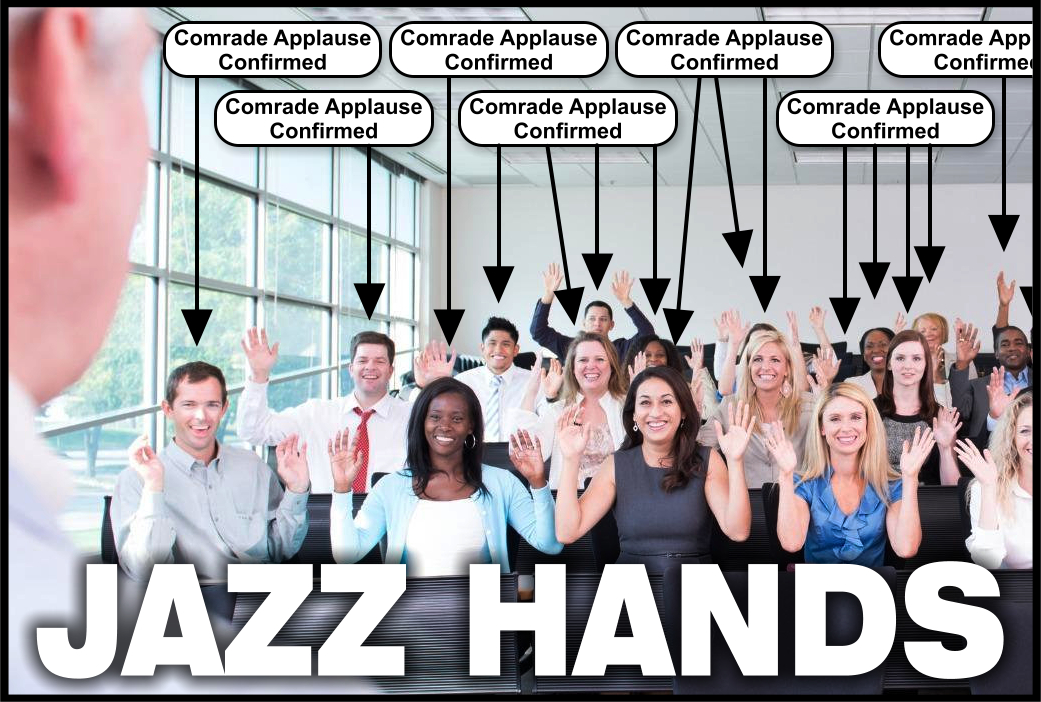 There is often an evil motive for Leftist behavior, and lame excuses are made up routinely to explain it. One of their latest bizarre missions is to replace audience applause with silent ‘jazz hands,’ under the pretext that, “Some people are sensitive to noise.”
For those who missed this crazy new fad, it started with the student union in England’s Manchester University. They complained, “The noise of applause could trigger anxiety among some students.”

Very soon, the fad spread, and now harebrained Leftists in the USA and Canada are calling for an end to clapping, in a quest to replace it with silent ‘jazz hands’ instead.

At first, it appears they are just trying to be annoying, but after analyzing the idea further, their motive becomes clear.

When audiences are supposed to clap, individuals can ‘cheat’ by merely pretending. As they mimic clapping their hands may not strike each other, or they might only touch lightly, yet they appear to be clapping like everyone else. If you were a member of a soviet audience in the USSR, where authorities were watching to see who stopped clapping first, this kind of ‘resistance’ was hard to spot. That, in turn, would cause problems for the directors, who wanted full volume for the effect it had on the TV audience.

This situation applies today when Democrats give speeches. They want their audiences to applause with full volume for maximum effect. It is embarrassing for them when applause is weak. When it appears that everyone is giving a big hand, why does it sound less pronounced?

Once they realize the answer, that some audience members are faking their applause with a silent or muted clapping, they look for solutions.

Why do some clappers move their hands at all, if they do not wish to make noise? They are afraid of being seen disagreeing with their peers. What is the Left’s solution to this? Force them to reveal their support by making them use jazz hands.

Once the audience is required to raise their arms and shake their opened hands, any dissenters become very visible immediately.

In a Leftist audience where everyone’s support is mandatory under penalty of expulsion and career-ending shunning, every sheep will applaud. Some secret dissenters can fake-clap to avoid detection, but with jazz hands applause, Party leaders spot dissenters.

Far-left directors can proudly proclaim that every audience member gave the speaker their full support, as evidenced by the 100% participation rate of jazz hands.

It boils down to yet another way for the Left to stifle opposition, and to force full support from their hapless members.