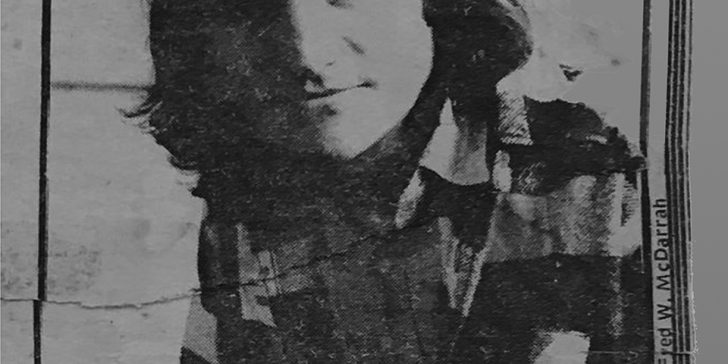 A familiar pack of cowardly jackals bombarded President Trump, with all the usual lies, underhand dealing, and skulduggery. As I picked one out of the horde to take apart and research, I came across a 46-year-old newspaper article that would perform my task for me.

It was written by *Col. Robert D. Heinl [backup here], ‘one of the finest writers of military literature ever to emerge from the profession of arms in the United States.’

A 27 year veteran of the Corps, he saw combat action at Pearl Harbor, the South Pacific, Iwo Jima, and Korea. A contributor to the Encyclopedia Britannica, National Geographic, and other professional journals, he was the author of a history of the Marine Corps, Soldiers of the Sea (U.S. Naval Institute, Annapolis, Maryland), and Victory at High Tide.

How would Col. Heinl assist me? In yesterday’s Salon .com, there was a particularly oafish Trump insult salad tossed together by Lucian K. Truscott IV. It was just another run-of-the-mill rant about Trump, but at the bottom, it said:

Lucian K. Truscott IV, a graduate of West Point, has had a 50-year career as a journalist, novelist and screenwriter. He has covered stories such as Watergate, the Stonewall riots and wars in Lebanon, Iraq and Afghanistan. He is also the author of five bestselling novels and several unsuccessful motion pictures. He has three children, lives on the East End of Long Island and …can be followed on Twitter @LucianKTruscott.

I wondered how a brilliant person like that could be such a twerp. Online I soon discovered that Lucian K. Truscott IV was not as outstanding as he would have us think. This was him back in 1972, writing for a hippy rag, The Village Voice:

It did not gel with what Salon said about Truscott, so I looked through newspaper archives to see what others stated on the matter. 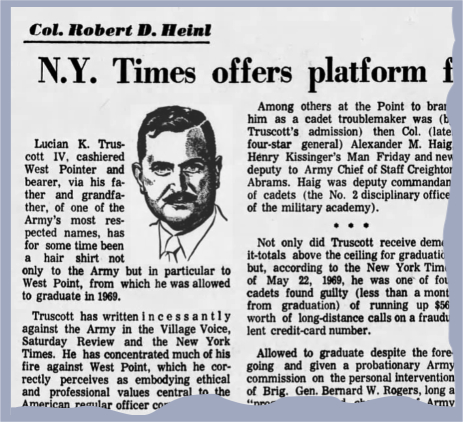 I came across a 1973 article by Col. Robert D. Heinl, an extraordinary expose on Lucian K. Truscott IV. It was very unusual for those days as you would practically never see one journalist attacking another, let alone ripping pounds of flesh off his carcass. Heinl used words the journalist union thugs probably did not understand, to get around their protection racket. The article went to print, and who knows what trouble it caused Heinl’s career once the union saw it? He was furious with Truscott and the New York Times and pulverized them both.

I have reproduced most of the article below, emphasis mine, with definitions of some of the words used. See the whole original article here.

Lucian K. Truscott IV, cashiered West Pointer and bearer, via his father and grandfather, of one of the Army’s most respected names, has for some time been a *hair shirt not only to the Army but in particular to West Point, from which he was allowed to graduate In 1969.
[*a constant punishment to the Army and West Point]

Truscott has written incessantly against the Army in the Village Voice, Saturday Review and the New York Times. He has concentrated much of his fire against West Point, which he correctly perceives as embodying ethical and professional values central to the American regular officer corps.
….
For a standard-bearer in a crusade against values whose common factor is honor, Truscott has, by public record or his own admission, a somewhat *gamey pedigree.
[* malodorous; smelly.]

While at West Point, Truscott was far from a model cadet.

Among others at the Point to brand him as a cadet troublemaker was (by Truscott’s admission) then Col. (later four-star general) Alexander M. Haig, Henry Kissinger’s Man Friday and new deputy to Army Chief of Staff Creighton Abrams. Haig was deputy commandant of cadets (the No. 2 disciplinary officer of the military academy).

Not only did Truscott receive demerit-totals above the ceiling for graduation, but, according to the New York Times of May 22, 1969, he was one of four cadets found guilty (less than a month from graduation) of running up $562 worth of long-distance calls on a fraudulent credit-card number.

Allowed to graduate despite the foregoing and given a probationary Army commission on the personal Intervention of Brig. Gen, Bernard W. Rogers, long a ‘‘progressive’’ and champion of Army permissiveness, Truscott lasted 13 months and 17 days as an officer.

At Ft. Carson, Colo., in mid-1970, ironically under command of Gen. Rogers, who had left West Point when Truscott did, Truscott was allowed to resign from the Army “under other than honorable conditions” for the good of the service. Charge: “Conduct unbecoming an officer and a gentleman.”
….
…Truscott since has repeatedly *traduced the honor code of the Army and West Point
[*speak badly of or tell lies about (someone) so as to damage their reputation.]

…the New York Times, which has afforded this *scapegrace ex-officer the considerable platform of its prestigious op-ed page, declined to enlighten its readers as to Truscott’s unsavory credentials.
[*a mischievous or wayward person, especially a young person or child; a rascal.]

Last Aug. 19, the Times ran a bitter and cynical op-ed column by Truscott, “West Point: On Their Honor.” For the Times to have published such a piece by a contributor of Truscott’s background can only be likened to printing a polemic against bank examiners by a known *embezzler.
[*one who steals money he has been trusted with, especially from his employer]

To compound what must surely be construed as extreme unfairness if not one-sidedness against West Point and the Army, the Times then refused room in its pages for a *remonstrance and rebuttal written by J. Robert Harman Jr., president of the West Point Society of New York.
[*a strong protest, complaint, or criticism about something.]

Harman’s letter, dated Aug, 31, not only refuted the Truscott column but called the Times to task for accepting a contribution from a person of Truscott’s bias and history (which Harman briefly summarized).

More than three weeks later after the Times had hastily printed a routine opposed letter objecting to the Truscott column but making no disclosure of the writer’s past, Harrison Salisbury. Times associate editor, wrote Harman that, because it had already run one letter (dated five days after Harman’s), the Times “had decided against carrying anything further.”

In opening its op-ed page to the likes of Truscott, whose background the Times surely must have known, and in then declining to grant equal time to a respected West Point alumni spokesman, let alone to disclose the nature of Truscott’s past association with and separation from the Army, the Times violated elementary tenets in the journalist’s code of fair play and truth.

Were this shabby episode alone, it would reflect badly enough on a journal which proclaims considerable rectitude if not moral anointment.

The Times has, however, also lent its op-ed page in 1972 to irresponsible attack on West Point and on the Army by a sorehead non-West Point officer who had retired hastily on receipt of Vietnam orders.

It also has run how-to-do-it incitations for putting out underground Army newspapers, contributed by a seditious soldier-editor.

The entire thrust of these New York Times articles, tendentious in the extreme, antimilitary, cynical and destructive in nearly every respect, has been to undermine the Army as an institution in its hour of greatest travail, national unpopularity and vulnerability.

For the Times to give the sanction of publication in its pages to such views is hurtful enough to the common defense. For it to afford space — while stifling full disclosure and rebuttal — to anti-Army advocacy of such tarnished provenance is unforgivable.

There is more to say about Lucian K. Truscott IV, and how he let his ancestor Thomas Jefferson down, but I will leave that for another time.

Today Truscott likes to attack Commander-in-chief of the United States Armed Forces, President Donald Trump. Were Thomas Jefferson alive today, he might apologize to President Trump, saying, “I have hundreds of descendants. There was bound to be at least one turncoat among them.”