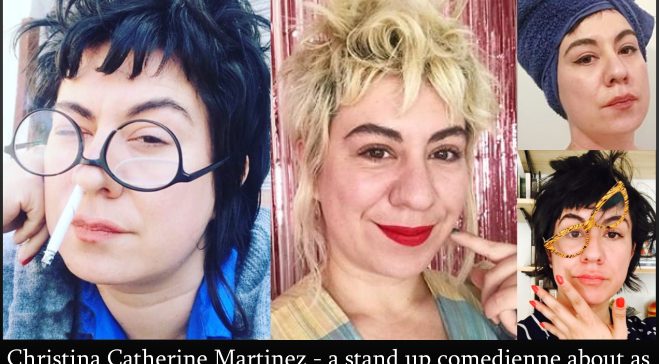 Formal education, training, and practice are essential for those serious about drawing and painting. Without these, a would-be artist remains rooted in a development plane like ninth grade. That observation is impartial, not subjective – like saying taxis will not arrive unless called. Things happen for a reason, and drawing is a discipline necessary to painters. Without training and practice, an artist will never draw to their potential, and they can forget all about painting.

Over the last century, many artists thought they could abandon formal education, but it separates those who can draw well from those still stuck in junior high. Remarkable dancers go to famous dance schools, world-class singers have voice training, outstanding actors go to first-rate acting schools, excellent writers study literature, and great visual artists go to art school.

Publishers, galleries, and cable news stations are constantly bombarded with bad art that is rejected. Senders receive reject letters or nothing at all. When asked for advice they are told to get training or education. “Do an art course kid.”

The difference between a would-be artist with no formal schooling and a graduate with several years of experience in the real world is like chalk and cheese.

Three months of drawing lessons make a substantial difference for someone with talent, but a three year Fine Art course will magnify that difference tenfold. Students practice life drawing, conceptual design, the evolution of design, psychology, perception, painting, printing, sculpture, photography, film, software, materials, theory, history, technology, time, animation, biological engineering, machines, advertising, industry, and other subjects. In a decent course 85 to 90% of the students drop out, leaving only those who can stand the hard criticism that goes with the training, and this is essential to losing bad habits learned in earlier school years. Third-year students will look at the work of first-year students and shake their heads in disbelief, to think they used to be that naïve and draw that badly.

Many first-year students will burst into tears and storm out after being told their drawings are awful, and that is part of the learning. Artists face plenty of criticism in the outside world and must be ready for it. Colleges that avoid hurting their students’ feelings produce droves of snowflake graduates who go into teaching, unable to handle the financial and psychological rigors of a competitive art world.

Millions of first-year art students around the world, during the first few days of school, are just like Jim Carrey. They are temperamental, sure of themselves, proud of their vile drawings, and bursting at the seams to make more. 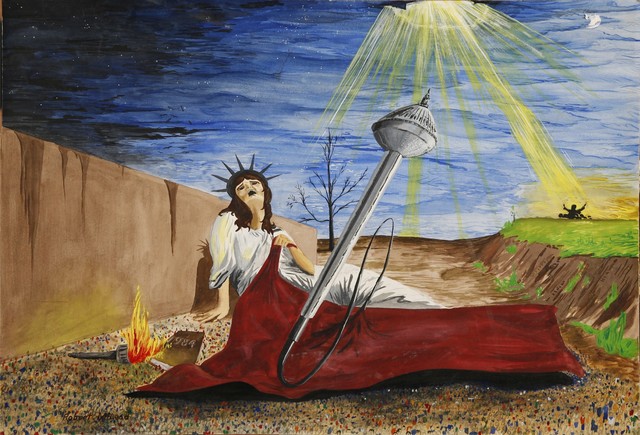 Lecturers and teachers bravely go forth to savage them with brutal truths. “Linda, what the hell is that nonsense supposed to be?” one demands.
“Why, it’s the Statue of Liberty, of course,” Linda stammers.
“It’s nauseating,” snaps the teacher. “What’s that?”
“A spaceship.”
“I don’t think I’ve ever seen a worse piece of crap. It makes me want to vomit.”
“Waaagh!” [Linda grabs her bag and runs out.]
“And another one bites the dust,” the teacher rolls his eyes. He covers the offensive painting with a sheet of canvas. “Okay, class. Keep working. Hopefully, the rest of you can do better…” 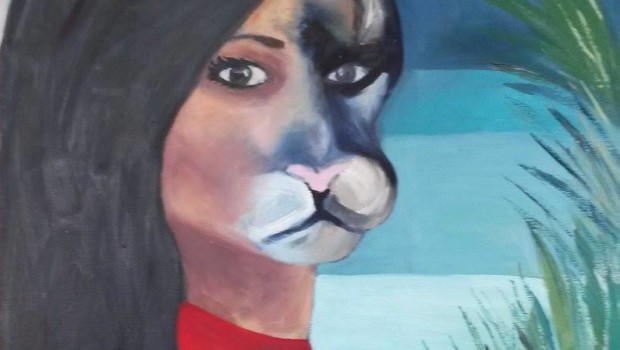 If Jim Carrey enrolled in Art School I think he would bawl and do a runner by lunchtime. I doubt he could ever take the criticism. Look at the persistently bad art he is making. 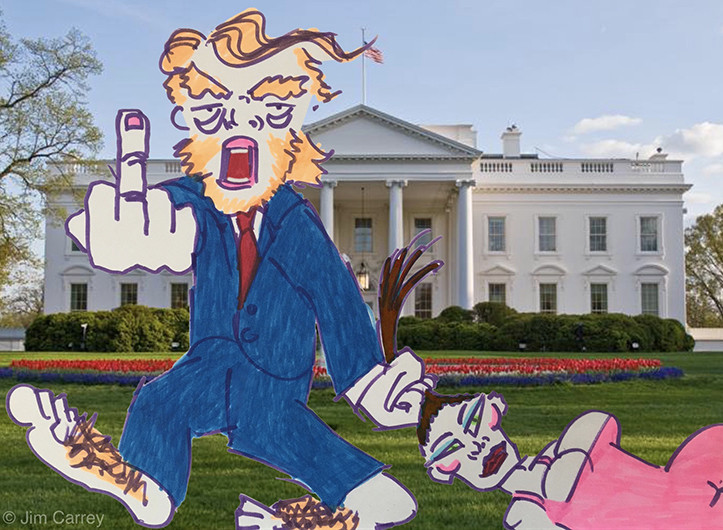 Jim Carrey’s hatred for President Donald Trump and Republicans is obsessive, bordering on psychopathic. His deep and fierce passion mixed with a spectacular lack of political understanding and a dearth of art training makes him a prolific maker of bad art. He has talent and could be quite an excellent visual artist if he bothered spending three years in a good art school. Until then he is going to contribute to the world’s supply of bad art.

Galleries, newspapers, and Cable News Networks would usually ignore second-rate art, but they make an exception when the creator is famous and has a Left winged agenda. Then they roll out the red carpet and begin promoting such artists as “great.”

CNN took on the task of trying to get Jim accepted as a talented painter yesterday, but their lovely presentation had a significant flaw, by the name of Christina Catherine Martinez. The page begins with a giant photo of Jim signing a print at the 2018 British Academy Britannia Awards. This photo was purchased at Getty Images for around $470. I guess CNN could not be bothered sending out a photographer. Another photo from the same event shows a less flattering side to Jim, making him look like a strangled turkey in a bow tie. 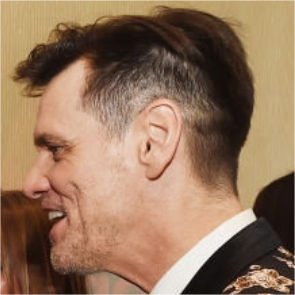 Next, they have an artist write up a spiel about what a great artist Jim is, but wait – did they find a good artist to do that? Would any self-respecting artist put their reputation on the line by praising lousy art? It would not be easy to find one, so instead CNN chose small-time unknown clown Christina Catherine Martinez to do the work. 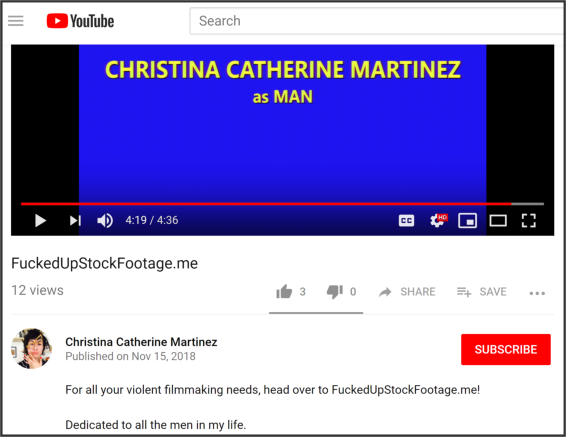 The same day she wrote the Jim Carrey promotion (Nov 15, 2018), she put up this hammy YouTube video, which received all of 11 hits. She acquired three thumbs up too, so her parents must have watched it with her. They’ll probably take the YouTube down in time, but here is some of the ‘performance.’

Yes, that is the “artist” they dug up to tell you, the public, what a great artist Jim Carrey is. So who is this Christina Catherine Martinez knucklehead, anyway? 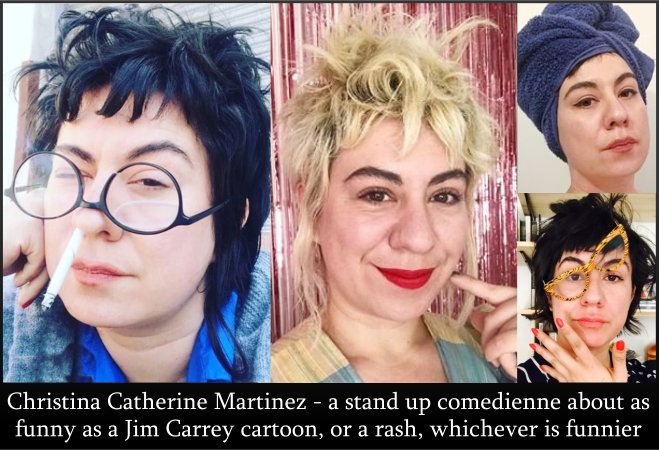 I cannot find anything about her education, which is usually the first thing Lefties tout, so until shown otherwise I will assume she dropped out of high-school. A stand-up comedienne in Los Angeles, she said this about herself [emphasis mine]:

I was born and raised in Los Angeles, but it seemed like this was the thing I was looking for. When I went up north to finish school Andrew offered me a job as a staff writer for ArtSlant. I had no formal art training or art-historical education, but I went to every opening and every museum and looked at every damn thing I could.

Sorry Christina, but looking at every damn thing you could does not equal formal art training or an art-history education. Christina then tried standup comedy and said, “I’ve also made the sincere, risky moves and been met with embarrassed silence. Audiences love to see vulnerability…”

No Christina – their silence has nothing to do with wanting to see you vulnerable. It was merely because you weren’t funny. Neither were Jim Carrey’s cartoons. You say you had no professional training. You will love William Hung.