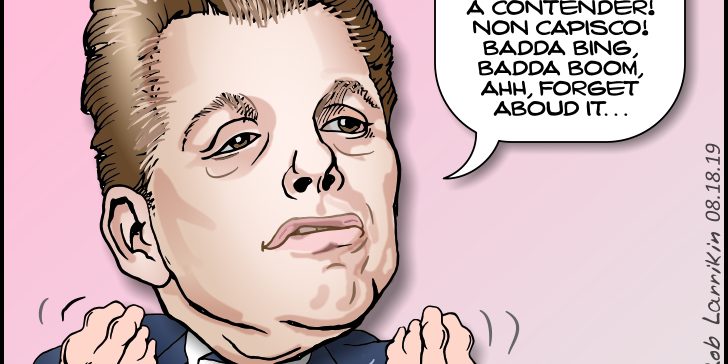 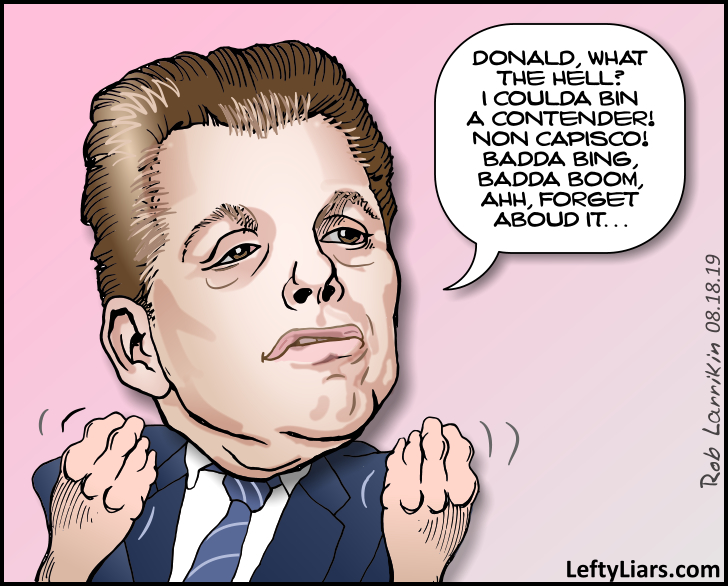 When Anthony Scaramucci talks, he sounds like a mafioso, which is not surprising since he was born into an Italian/American family in New York and his father, Alexander, was a construction worker. What would such a man want for his son; to follow in his footsteps? No, Alexander would prefer to send Anthony to college, to be educamated. “I want my son to be a somebody,” he would announce.

How was a guy like Alexander to know that colleges had been taken over by the Left and were now socialist propaganda factories, pumping out liberals? He was an Italian builder, not a political expert. He probably thought rock stars got money for nothin,’ and their chicks for free. So he paid to send his beloved bambino off to Harvard, and The Mooch had his head filled with all kinds of left-winged nonsense.

Alexander:  Heh. Did you notice how many goddammed Arabs are movin’ in these days?
Mooch:  Uh-huh. Well, papa, that’s life, don’t forget, your father did the same thing.
Alexander:  You callin’ your Nonno a friggin Arab?
Mooch:  Just sayin’, we were immigrants too, y’ know?
Alexander:  Christians, not Muslims! And what’s with the bumper sticker on your car?
Mooch:  What sticker?
Alexander:  Nuclear Power? No thanks.
Mooch:  It’s a danger to the environment.
Alexander:  What danger? It’s cheap and clean.
Mooch:  The waste it makes. It’s —
Alexander:  They can contain it for hundreds of thousands of years
Mooch:  You believe that?
Alexander:  Why not?
Mooch:  You want a nuclear wasteland for your grandkids to grow up in?
Alexander:  Jesus Christ, son. I pay all this money, and they fill your head with crap.
Mooch:  Yeah, right, pa, you know more than the professors, right?
Alexander:  Yeah. Why is that?

Mooch would have gone to school and filled up with kooky notions, only to have them smashed by his parents back home. Like many other kids his age, it was a shaky way to start a career, guaranteed to make him jump about in different directions. Like an Italian mobster, he talks tough, but out of his mouth tumble the words of a mixed-up student of the Left.

He endorsed the presidential campaigns of Hillary Clinton and Obama. In 2008, and served as a fundraiser for President Obama, supporting gun laws and gay marriage, while opposing Trump’s wall in 2015, tweeting, “Walls don’t work. Never have never will.”

According to The Daily Beast, Scaramucci donated to Obama and Clinton’s presidential campaigns. Scaramucci gave $5,600 to Obama in 2008 and $4,600 to Clinton in 2007, and ahead of the 2016 election, he said he hoped Clinton would be the next president. “I hope she runs [in 2016], she is incredibly competent,” he tweeted in April 2012, adding she was “the real deal.”
“I like Hillary,” he also tweeted. “Have to go with the best athlete. We need to turn this around.” Another tweet said a “Hillary run makes everyone better.”

During this Fox interview in August 2015, two months after Donald Trump launched his Presidential campaign, the Mooch called Trump a very divisive, bullying, anti-American hack-politician. He said he did not like how Trump talked about Megan Kelly or women, and that he had a big mouth.  Gesturing with his hands in the Italian tradition, he invited Trump, saying, “Bring it! You’re an inherited money dude from Queens County. Bring it, Donald. Bring it. An inherited money dude from Queens County.”
In the same interview, Mooch called Trump a class divider. He predicted, “this nonsense” [meaning Trump’s Presidential Campaign], would “be over by Thanksgiving,” which was three months away.

With his typical good sportsmanship, President Donald Trump extended a hand of friendship to the jumpy liberal investment banker, appointing him White House Communications Director in July 2017. Suddenly The Mooch changed his mind, telling reporters, “I love the president, and I’m very loyal to the president, and I love the mission that the president has…”

Alas, it was only a few days before skittery Scaramucci blew it. Upset about leaks, he tried pushing a reporter from The New Yorker to reveal his source, and in doing so, provided the Left plenty more ammunition with which to embarrass the President. Scaramucci cursed and swore like a New York mobster, ripping into various Trump admin, and gave all this on a silver platter to the reporter. Trump fired Scaramucci ten days later.

Now, about two years on, The Mooch has been attacking Donald Trump once again, delighting Fake News. Scaramucci said, in his best mobster accent:

[What] triggered me most was the whole ‘send them back’ nonsense, I mean what, whaddya do, I mean that is literally a racist trope for two centuries, okay. Y’know, everybody’s parents that have some kind of ethnic background or grandparents have heard that. I, I said when I still supporting, “Hey, y’ know, I’m still supporting you, you’re doing a lot of good things, why do you wanna go full-on racism like that and divide the country? The first thing the country’s united, you’re the President of the United States, and you’re leading the free world, whaddya, whaddya doin? He’s very, very unstable, and I gotta t–

Like so many on the Left, poor old Mooch could not differentiate between a racist ‘send them back’ and a patriotic ‘send them back.’ A patriot would want any enemy of America sent back, so it appears Harvard neglected to teach Scaramucci the difference between Americans and enemies of America. If he thinks it is racist to repel enemies, he must be unhappy that America repelled the British in Washington’s day. He must admire Benedict Arnold.

After all that, you may wonder why President Trump would hire a person like Anthony Scaramucci and let him be his assistant and Communications Director. There are many reasons, but there are no guarantees any will work because people are unpredictable.

Donald Trump has very high standards, and to enforce those values, he has to hire and fire frequently. If you are not a perfectionist like Trump, you may find yourself being let go, but that is okay. You are in good company. It takes much to keep up with a man who works like ten men possessed.

The POTUS has to make decisions quickly as his work swamps him. He will often use other people’s recommendations to save time, but will not necessarily complain about them being wrong when they do not work out.

He might choose a person because he knows they will be arch enemies with someone else and would have a good effect on that other person, whether they last or not. There are dozens of other reasons he might pick a particular person. When perched on such a high branch, decisions like this are not straightforward.

There will always be those who come and go, and some may only stay a brief time, but at the end of the selection process, Trump will end up with a great team that serves all Americans. The more effective it is, the more individual Americans will benefit.

For the greater good, Trump may need to sacrifice a few Mooches along the way.