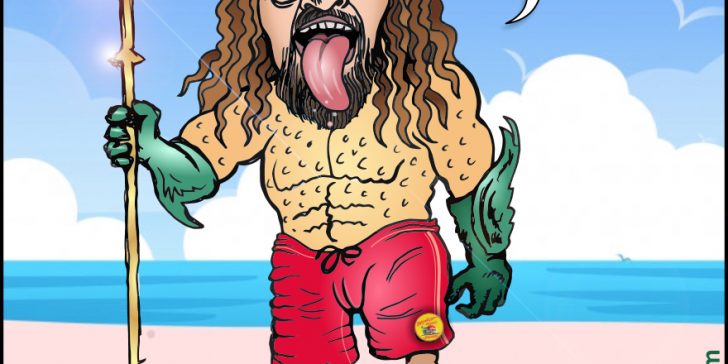 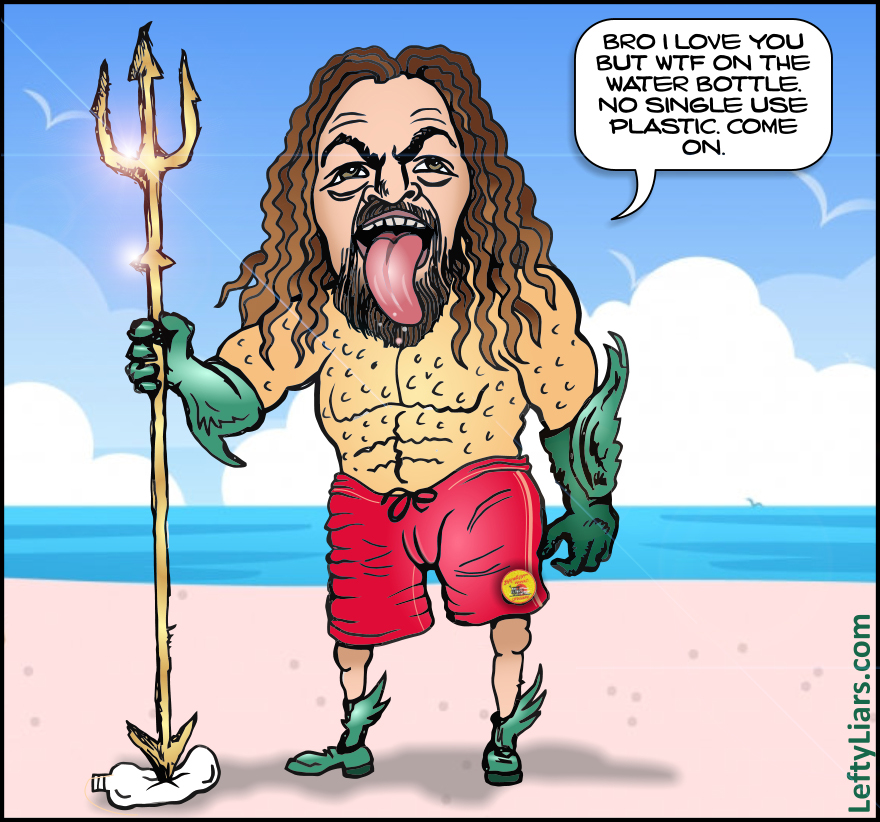 If you search online for the term ‘single-use plastic epidemic’ and scroll down, you will see many hysterical headlines and articles. Sound-bites like “We’re drowning in plastic” and “Plastic pollution” fill the internet. “Plastic is literally everywhere,” many Lefties holler, while others screech, “The plastic pollution epidemic is staggering!” One mouth-breathing chowder-head wrote, “Global plastic plague reaches epidemic proportions!”

Each day we see cringing-wincing Twitter or Instagram melodramas on the subject. Last Wednesday ‘Aquaman’ star Joseph Jason Namakaeha Momoa criticized another actor,  Chris Pratt, for using a ‘single use plastic’ water bottle. Momoa wrote, “Bro i love you but wtf on the water bottle. no single use plastic. come on.”

Momoa, a fatherless-raised German/Native Hawaiian cross, seems like a kitschy mixture of hippydom, Hollywood, indigenous dreadlocks shtick, girly-magazine Neanderthal-chic, and Conan the greenie barbarian freak. A meaty justice warrior, it is said his family god is a shark, and his gender pronouns are Aqua-he, Aqua-him, and Aqua-his, which could upset drag-queen and feminazi fans. Switching roles from a lifesaver in Baywatch Hawaii to a Haka-performing Māori in Game of Thrones, a Ramapough Mountain Indian in a TV drama, and a cannibal in some Canadian production, Joseph Jason Namakaeha Momoa was making Bollywood directors weep with jealousy. In perhaps an attempt to out-do his own precious Native Hawaiian name, he called his son ‘Nakoa-Wolf Manakauapo Namakaeha,’ though there are no wolves in Hawaii.

Instead of fighting forces of evil, as a real Aquaman might, it seems all Momoa can come up with is fighting a friend on Instagram over a plastic drink bottle. It is a massive letdown akin to a Joe Biden rally attracting an audience of ten.

If Chris Pratt had a spine, he would surely have told the Kitsch Crusader to stick his plastic bottle where the sun rarely shines. Instead, the politically correct actor gave a groveling apology. “Aquaman! You’re completely right,” he wrote. “Dammit. I always carry my big gallon size reusable water jug with me too. I even had it that day!!!”
The Greta Thunberg fan added, “Love you too buddy. My bad. I don’t want your home of Atlantis covered in plastic. Hear that kids? Reduce. Reuse. Recycle.”

What a Pratt. He probably hasn’t felt so proud since he donated to Barack Obama’s 2012 Presidential campaign. The two chuckle-heads were able to continue their friendship despite the synthetic drink vessel, and Bollywood had another theme for a soap opera.

In the past, kids had movie heroes like Paul Newman and Bruce Willis. Now it appears all they have are she-men and metro-sexual lunkheads whining about polyethylene.

For the many who learned in school that disposable one-use plastic items are “bad” for the environment, chillax. Breathe easy – you were the victim of a grand lie. Grab a plastic bottle of diet-soda from the fridge, jab a plastic straw in it and suck away. Toss it in the trash-can, along with synthetic grocery bags, six-pack rings, packaging wraps, and yogurt containers. When they end up in the landfill, they will not harm anyone or do the planet any “damage” whatsoever. It is one of the great hoaxes the Left played on you, and if you fell for it, do not panic. Millions of others did too. Calmly look at the facts and make a few adjustments.

Lefties say that plastic bottles, straws, and bags take hundreds of thousands of years to decompose, which is false. Many contradict one-another, saying 100,000 years, 1000 years, 450 years, and some, as little as ten years. Regardless, it a Red Herring argument, as plastic compressed under twenty yards of soil in a landfill harms nobody.

Lefties made society believe that if plastic does not decompose, it must damage you, but this is not the case. Most of it ends up in landfills under the ground, not hurting anyone.

Stand on a grassy estate that was once a landfill. There are now houses, parks, and gardens. As you examine the ground, ask yourself this question: “Is the flattened milk bottle 23 yards (21 meters) below my feet hurting me in any way?”

The answer is no.

Flattened pieces of plastic are merely lying in the ground, under thousands of tons of dirt, where they originated. Plastic comes from crude oil, and crude oil is derived from ancient fossilized organic materials, such as zooplankton and algae, that settled at the bottom of ancient seas and lakes. Crude oil is perfectly natural, and it gives us plastic. Which would you prefer to have deep under your house? A lake of sticky, smelly, dirty crude oil, or small pieces of clean, odorless plastic?

I can hear socialist eco-alarmists shouting, “But why would people be so bitterly against plastic bags, straws, and bottles if they were not harming anyone?”

They want to replace capitalist democracies with Socialism and have been working hard on that for decades. Once they succeed, they will say, “How about we try communism?”

How does one destroy American society? From the inside out. Dismantle anything good. Undo great things, like plastic, which is fantastic. From Wikipedia:

Due to their low cost, ease of manufacture, versatility, and imperviousness to water, plastics are used in a multitude of products of different scale, including paper clips and spacecraft. They have prevailed over traditional materials, such as wood, stone, horn and bone, leather, metal, glass, and ceramic, in some products previously left to natural materials.

In developed economies, about a third of plastic is used in packaging and roughly the same in buildings in applications such as piping, plumbing or vinyl siding. Other uses include automobiles (up to 20% plastic), furniture, and toys. In the developing world, the applications of plastic may differ—42% of India’s consumption is used in packaging. Worldwide, about 50 kg of plastic is produced annually per person, with production doubling every ten years.

Plastics have many uses in the medical field as well, with the introduction of polymer implants and other medical devices derived at least partially from plastic.

Apart from all the things mentioned above, plastic is even useful when found washed up on beaches. In several episodes of ‘Naked and Afraid,’ contestants salvaged valuable plastic items such as bottles, sheets, fishing lines, nets, foam (that floated), and other things that helped them survive. Ironically some complained about the life-saving debris before using it.

Before Google Earth began, hippies and greenies used to lie about mines eating up the Amazon. They would regularly post scary close-up photos of mines that scarred the forest and made out that these were destroying the South American ecosystem. When Google Earth started, one could show their lies up by checking the areas in question to find they had all regrown. Skeptics could show the vast swathe of green that was there, ridiculing enviro-wackos in the process. They stopped circulating their Amazon scare-photos, but recently one of them realized that Google did not map oceans.

“We can do what we used to do with rain forests, with the seas,” they announced and began spreading myths about the oceans filling up with plastic detritus. When easily accessed satellite software starts covering the planet’s seas, you will notice there is no such problem.

Some Lefties take bags of plastic trash out on boats to throw overboard so their divers can photograph it from underneath. These are displayed across the internet regularly. Go out in a boat yourself and look for such slews of plastic rubbish, and you will find either nothing or very little. Greenies always manage to come across scads of the stuff that happens to have scuba divers with underwater cameras at the ready. By now, you should know you can trust Lefties as far as you can throw them. Their ‘proof’ has “FAKE” written all over it.

Millions use so-called ‘single-use’ plastic bottles many times over. Rather than buy a fancy water container, people rinse out and use disposable bottles. Many cut the bottom part of the bottles off to use for planting seedlings. They also re-use plastic grocery bags for multiple purposes, such as liners for bedroom or office wastepaper baskets. Tenants and guests often use wastebaskets to dispose of food scraps, and grocery bags make handy liners. They are useful to tie around shoes, hats, and any other object to keep dry while running through rain from the house to the road. For those wiping liquid from a floor using paper napkins, such bags are perfect for holding the wet paper before taking it to a bigger trash can. With hundreds of similar uses, whole populations keep grocery bags to use later. Many stores sell plastic holders for just such a purpose, as you can see here. Where does the Left get off telling us we only use them once?

Humans have been using disposable tools for millennia. We all know about spearheads and hand choppers or stone knives, shaped and sharpened through chipping and cracking rocks. Cavemen only used these while they were sharp and tossed them away once dull, millions of times over the centuries. They keep turning up every minute of the day around the world. Many tools made of wood, vines, twine, and bone were junked when they were dull, broken, frayed, or spit. Our ancestors threw leather shoes away when worn out, along with clothes, smoking pipes, bows, arrows, traps, baskets, spears, clubs, axes, walking sticks, staffs, blowpipes, drums, grinding stones, whistles, water bags, horns, sandals, fire-making sticks, jewelry, amulets, idols, and combs. Yet Lefties claim only modern man lives in a throw-away society, in a disposable world. They appear to know little about human history.

Please remember that actors are notoriously ignorant when it comes to politics. Understanding it requires a great deal of reading, writing, thinking, and debating. Hard-working actors, scientists, and doctors have little time for that. Most are far too busy with their work to be absorbing finer details of political or economic philosophy. While they may be very talented and knowledgeable in their field, they can be surprisingly daft politically. Einstein, a brilliant and wise man in science, was, in my opinion, a dunce politically, as was Stephen Hawking. Though I much admire both men, it should be no surprise when math geniuses are ignorant of politics. They have so little time to learn it.

Oddly, many people are surprised by this, yet none of them would expect Einstein to operate on a human brain or fly a 747 jet. Why not, if he was genius? Since he did not study flying or brain surgery, he would only know as much as the man in the street about them. Nobody would expect Jason Momoa or Chris Pratt to build a satellite or discover a cure for cancer. Yet, their fans like to think they exude vast political knowledge.

Fake News takes advantage of this weird mindset to print up the political beliefs of Hollywood stars regularly. Remember, they also print up ‘your future in the stars’ in small astrology charts, which shows they have little interest in objectivity or truth.

Momoa, if you have 12 minutes to spare, you should watch this video. It shows 38 things you can make with your so-called “single use” plastic bottles.