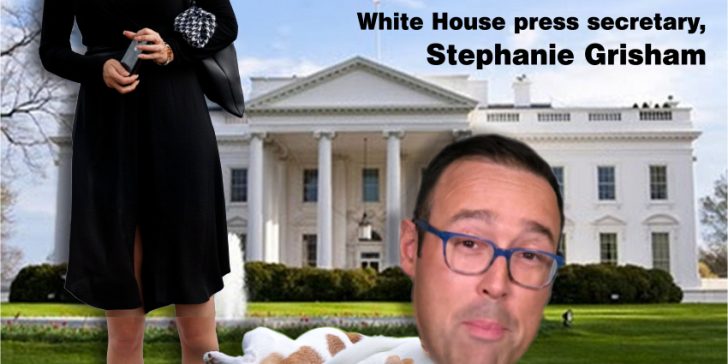 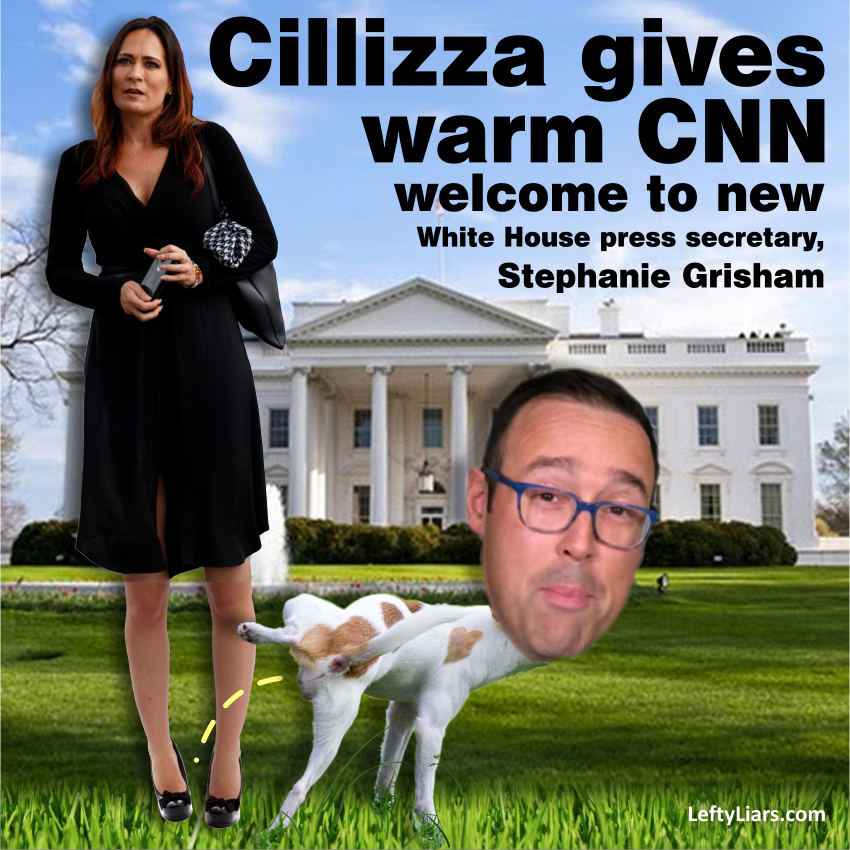 CNN’s Editor-at-large is still at large and wanted by small-minded but ambitious people everywhere, who want to know how to become an editor like him. Thrice before I have pointed out Cillizza’s failings, but it seems to have only spurred him on to behave even more irrationally.

His latest effort was this short article about Trump’s appointment of Stephanie Grisham as the new White House press secretary and White House communications director.

Fake News likes to call the President a misogynist, but when he hires a woman, they predictably attack her and hawk phony reasons for the appointment. It is their standard operating procedure (SOP) for such events.

As we go through Cillizza’s effort, please imagine that he was as drunk as a skunk and high on cocaine while typing. Caveat – I am not accusing him of being in that state, but I do think the results would be similar if he were.

Imagine a couple of colleagues had to hold him upright in his chair and place his fingers on the keyboard, prodding him to write something, and prompting him with questions. Let’s picture such a scene and use his own words in blue to illustrate what I mean:

Scene:  Chris Cillizza’s office, CNN. Two journalists, Chloe, and Rico guide the sloshed Cillizza to his desk and sit him down.

Cillizza:  What the..?
Rico:  Easy hombre. Sit down. Put your hands here.
Chloe:  Come on, Chris, start typing.
Cillizza:  Typing? About what? [Erp]
Rico:  Whatever man, just type.
Chloe:  How about Stephanie Grisham? She’ll be the new White House press secretary and communications director.
Cillizza:  She will?
Chloe:  Uh huh. Trump picked her.
Cillizza:  Okay [types]. The totally obvious reason why Donald Trump picked Stephanie Grisham
Rico:  What’s that, man?
Cillizza:  The heading. Whaddya think?
Rico:  Isn’t it a little long?
Chloe:  Also, The intensifier totally modifies the weak adjective obvious. Wouldn’t strong adjectives like self-evident, undeniable or self-explanatory be better?
Cillizza:  Shaddup! [types] President Donald Trump is not a complicated guy.
Rico:  Really? I thought he was pretty complicated.
Chloe:  He’s a billionaire and a POTUS. That sounds complicated.
Cillizza:  [types] He likes people who like him. He hates people who don’t like him.
Rico:  Man, who doesn’t like people who like them, or hate people who don’t like them?
Chloe:  Actually, that describes you, Chris, to a T.
Cillizza:  Will you two shaddap [belch]? I’m tryin’ to write here.
Rico:  Keep going.
Cillizza:  [types] And he trusts a very small group of people.
Chloe:  Sorry Chris, but who doesn’t? There are 8 billion people in the world. How many do you trust?
Cillizza:  Hundreds!
Rico:  But that is a tiny group compared to 8 billion.
Cillizza:  Bah! [types] Trump always favors those who have displayed the most loyalty to him
Chloe:  Um, sorry, Chris, but who wouldn’t?
Rico:  Yeah. Doesn’t that describe all people?
Cillizza:  Enough with the running commentary. I want to get to the point.
Rico:  The point?
Chloe:  It’s the name of his column.
Cillizza:  [types] The Point:  This is a man — and a President — who trusts almost no one.
Rico:  Isn’t that what we want in a Commander in Chief?
Chloe:  Yeah. He needs to be very distrusting of our enemies.
Rico:  Also, with all the leaks made by ‘trusted staff’ how can he be trustful?
Cillizza:  Do you two work for CNN or Fox News?
Rico:  Just sayin…
Chloe:  I thought it was just common sense.
Cillizza:  [types] And his time in the White House — a time defined, at least in part, by a series of damaging leaks —
Rico:  There you go. You just explained why he needs to be distrustful.
Chloe:  You think that defines his time in office? Hah! What about his igniting a historic economic boom with record lowest unemployment for women, blacks, Hispanics, Asians, 5 million jobs created, unemployment below 4 percent, rolling back red tape, negotiating better trade deals for America, unleashing American energy, securing borders, rebuilding the military, and fighting the swamp?
Cillizza:  You guys are obviously conservatives. I’ll have you fired.
Rico:  Actually, we’re both liberals. It’s just that we are starting to get tired of the lies told about Trump. My dad and two brothers are making good money now, thanks to him.
Chloe:  Yeah; my mother too. She hated Trump before. Now she’s his biggest fan.
Cillizza: This is mutiny [burp]. [types] has only reaffirmed his distrust, and convinced him that he can only really trust the people who were with him from the beginning.
Rico:  ‘Could only,’ and he has to trust some people to get so much done.
Chloe:  What’s the matter, Chris? Are you angry because Trump distrusts you?
Cillizza:  I don’t give a crap about that. Who cares if he distrusts me? He distrusts everyone!
Rico:  You sound like a girl whose prom date stood her up.
Cillizza:  [lurches at Rico, who dodges]. Why I oughta…
Rico:  Easy there, big fella. You might fall out of your chair.
Chloe:  Are you done yet, Chris?
Cillizza:  Almost. [types] Which is why Grisham was the only pick who made any sense to follow in the footsteps of Sarah Sanders.
Rico:  So, what you’re saying is, he picked her because he trusts her.
Chloe:  Whoop-de-doo. Didn’t we know that already?
Cillizza:  I’m tryin’ to point out that Trump didn’t hire her because of merit, but because she’s a pal of his.
Chloe:  Or maybe it’s because she’s a pal AND has merit. Did that occur to you?
Rico:  Yeah. It doesn’t have to be just one reason. He can have a few.
Chloe:  Yeah. When I pick a new dress to buy, I have several motives to buy it. Style. Price. Size. Washing instructions. What my boyfriend thinks of it. Durability. I don’t just buy it for one reason.
Cillizza:  Shaddup, shaddup! You two are giving me a headache!
Rico:  Jeez man, how did you become editor in the first place?
Chloe:  God knows. He’s a complete cuck.
Cillizza:  I’m sitting right here. I can hear you.
Rico:  Yep. He’s a cuck all right.
Cillizza:  You have your article. Now publish it!
Rico:  Sure. We’ll put it up, but man, you’ve got to start thinking about another line of work.
Chloe:  Maybe a pizza shop?

Cillizza is saying that a President whose staff leaks secrets on him, who has to battle an army of Fake News, and who is despised by millions of Lefties, should not be distrustful.

Chloe’s right. Cillizza Pizza has a good ring. Why are you pretending to be a political thinker, Chris? Did you do a deal with the devil, down in the swamp, for that position? Was it worth your soul? Get out of Fake News and start up your pizza parlor. Maybe a franchise. You could make millions if you could keep your warped political opinions to yourself.