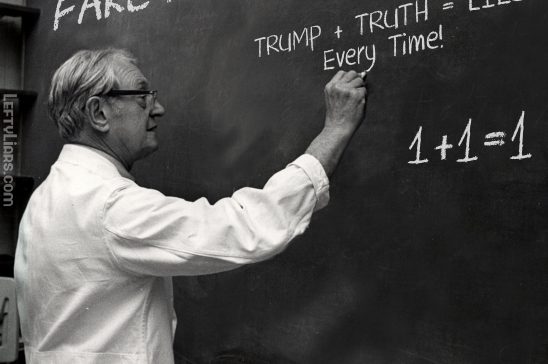 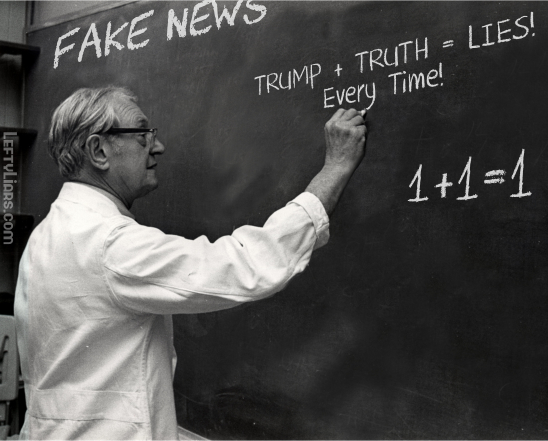 Many reporters misquote Donald Trump to create Fake News. Like a room full of monkeys with typewriters, they have been doing this 24-hours a day, 7-days a week, 365-days per year since he formally announced his presidential candidacy, June 16, 2015, at Trump Tower in New York. During that time, they have compiled a steaming mountain of falsely alleged lies.

Lefties believe in quantity, not quality. They think that if you lie enough, some of those lies will stick. I spent a year looking for one true lie Trump told and came up empty. Each time I hoist the alleged lie up on a lift and examine its undercarriage, it turns out to be a fake. When I challenge the Left to send a real falsehood, they usually deliver one of the many Gish Gallops compiled by Fake News. I reveal flaws in the list’s first alleged lie and explain the rest are no different.

Here is another example; an article by John Haltiwanger for Business Insider, June 15, 2018, which is and was Fake News. It is worth watching this 44-second long video they included.

Donald Trump is talking about bringing back the remains of the soldiers that died in Korea. John Haltiwanger knows that Trump said two things because they are in his article and the video. That is why the piece shows the two parts in two separate paragraphs.

First paragraph or statement (emphasis mine):

Second paragraph or statement (emphasis mine):

So many people asked when I was on the campaign. I’d say, ‘wait a minute, I don’t have any relationship’ – but they said, ‘when you can, president, we’d love our son to be brought back home’ – you know, the remains.

“So many people” doesn’t mean thousands. Thus – no lie. The mischievous editing once again took an event and described it out of context, unfairly. If Haltiwanger had left instructions for this scampish editing, it would look something like this: 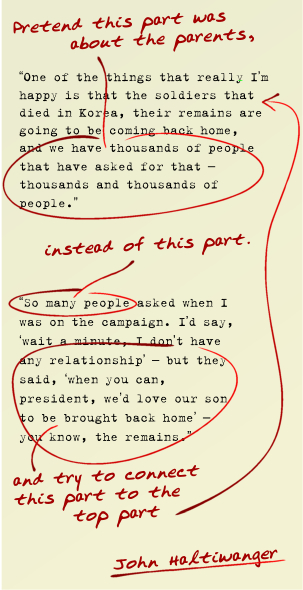 There is another point, too, about referring to “our son.” Many groups came to see Trump and would point out that their parents long wanted their sons’ remains brought home. They would say things like, “Our parents prayed to have their son’s remains brought home, for decades. We’re here to see their wishes come true.” Trump would reply, “We’ll do our best to bring your parent’s sons home as they wished.”

After those conversations, where the word ‘sons’ appears repeatedly, it became a habit to refer to ‘their sons’ in reply to the groups asking for the remains. If English is a person’s first language, this is not hard to understand. If not, that would help explain some people misunderstanding Trump. Trump could stand at a podium and say, “We will bring home your sons’ remains,” even though there might have been only one parent in the audience, and the gathering would understand what he meant. Many would shed tears. Not one would leap up, and screech, “LIAR! NONE OF US ARE THE PARENTS!” though I would not put such vile behavior past Trump-hating liberals.

Once again, there is no lie – just a nuance of the English language, a manner of speaking, and a habit of using the word ‘son or ‘sons’ regarding a particular group. It is then taken advantage of by a reporter who manipulates the quote even further, and voila, Fake News is born.

So who is this knucklehead, John Haltiwanger?

An anti-Trump millennial who wrote this glowing advertisement for Democratic Socialism, Haltiwanger grew up in Washington DC. He has a B.A. (Brainwashing Award). Gee! Then he was an unpaid volunteer English teacher in a government school in Georgia (which borders Russia, Turkey, Armenia, and Azerbaijan). From there, he went to Glasgow to study “International Relations” (i.e., communism). Back home in the U.S., he tried to freelance as a writer before finally getting a job in 2017 as a breaking news writer for left-winged Newsweek and now works for left-winged Business Insider.