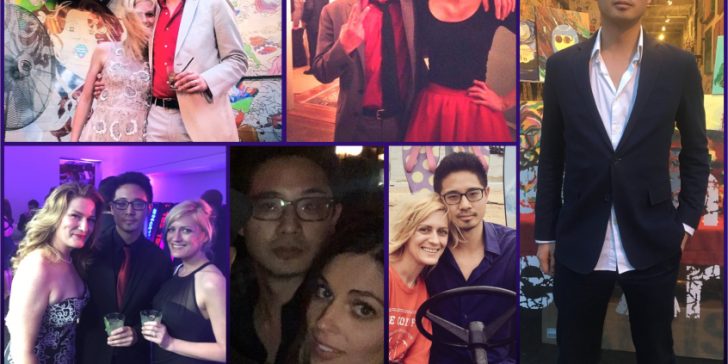 As the once great American culture is stamped out by anti-white immigrants, you would think that white newspaper editors would hold onto what is left of their heritage. Apparently, that is too much to expect. Tucker Carlson and Sean Hannity do their best to keep the madness in check, but most commentators, writers, and editors have not only given in but joined forces with the racists.

Each day tens of thousands of media outlets bash President Trump with lies, exaggerations, misinformation, misquotes, and made up sources, swapping stories with others to fill their pages with Fake News. And they are getting worse. Just hours ago the Las Vegas Review-Journal published a nonsense editorial about President Trump, and the justification for it was something issued a week before by The Daily Beast. Observe and see how they do this, as I walk you through the two-step process.

Glenn Cook is the executive editor of the Review-Journal so we can assume he wrote or oversaw the piece. Glenn writes that President Trump is channeling economist John Maynard Keynes, which is untrue. The article claims Trump was ambivalent about the nation’s debt. That is false. It implies Trump had a similar epiphany to a left-leaning academic. Untrue. Then comes Cook’s escape clause, when he writes:

Last week, The Daily Beast reported that Trump is content to ignore these looming problems because the crisis won’t hit until he’s out of office. “‘Yeah, but I won’t be here,’ the president bluntly said, according to a source who was in the room when Mr. Trump made this comment during discussions on the debt,” reported The Daily Beast.

After that, the editorial goes on for another 276 words, all based on the incorrect assumption that The Daily Beast was telling the truth. Yet when we examine the article at The Daily Beast, we find it is a cock and bull story. Written by Asawin Suebsaeng and Lachlan Markay, on December 5, 2018, it is labelled “exclusive,” which means it is their “scoop,” and nobody else’s.

They claim that “according to sources” Trump repeatedly shrugged off the importance of tackling national debt, and that he implied, “he doesn’t have to worry about the money owed to America’s creditors—currently about $21 trillion—because he won’t be around to shoulder the blame when it becomes even more untenable.”

They wrote [emphasis mine]:

“Yeah, but I won’t be here,” the president bluntly said, according to a source who was in the room when Trump made this comment during discussions on the debt.

These two reporters expect us to believe them when they say this Source was real, and that the Source was telling the truth, and that between them and their Source, there was no exaggeration or lies. Obviously, if they want us to believe their word, we need to look at them to see whether they are trustworthy. I will start with Asawin Suebsaeng, and if I find he is not credible, I will not bother continuing with the other. Instead, I will treat this as I do Gish Gallops. If the first turns out to be trash you have no reason to trust the others.

A short search for Asawin Suebsaeng tells me he is a racist from Thailand who tweets about killing and abolishing white people. He may now live in the United States, but he still has his Thai accent which can be heard here, and hates white Americans with a passion. 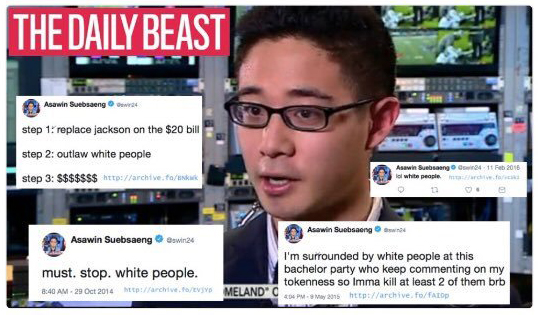 In case he deletes the tweet, it has been archived.

Asawin Suebsaeng wants to abolish white people. His @swin24 Twitter feed has plenty more examples of his contempt for American heritage. It is also clear he likes to prove what a manly man he is by photographing himself next to women.

When a Trump-hating, Caucasian-hating boy of this caliber claims a “Source” told him Trump said he does not care about debt, do you believe him?  No, neither would I.

The Las Vegas Review-Journal would, though.

Glenn Cook is the executive editor.

He is a doppelgänger of my next door neighbor – a great guy.

Why would he take the word of a Thai racist with a name similar to Asswin Shebang?

What was he thinking?

Imagine what the Founding Fathers would think of Asswin Shebang and his Thai Sauce, or The Daily Beast?

Come on Glenn. Surely you can do better than this.

If you are going to print Fake News about your President, who happens to care tremendously about America’s debt – a debt that would not exist had previous Presidents been like Donald Trump – could you at least use half credible media to quote from? Is that asking too much?