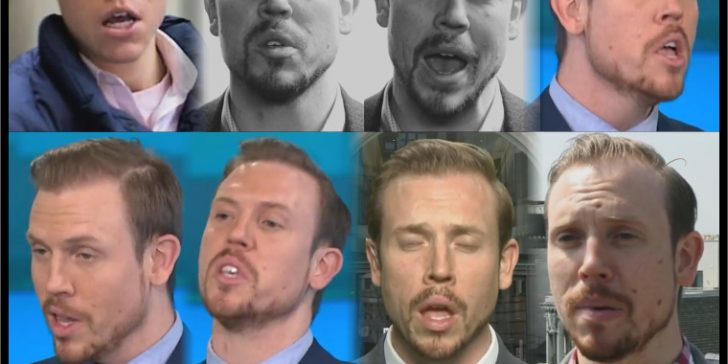 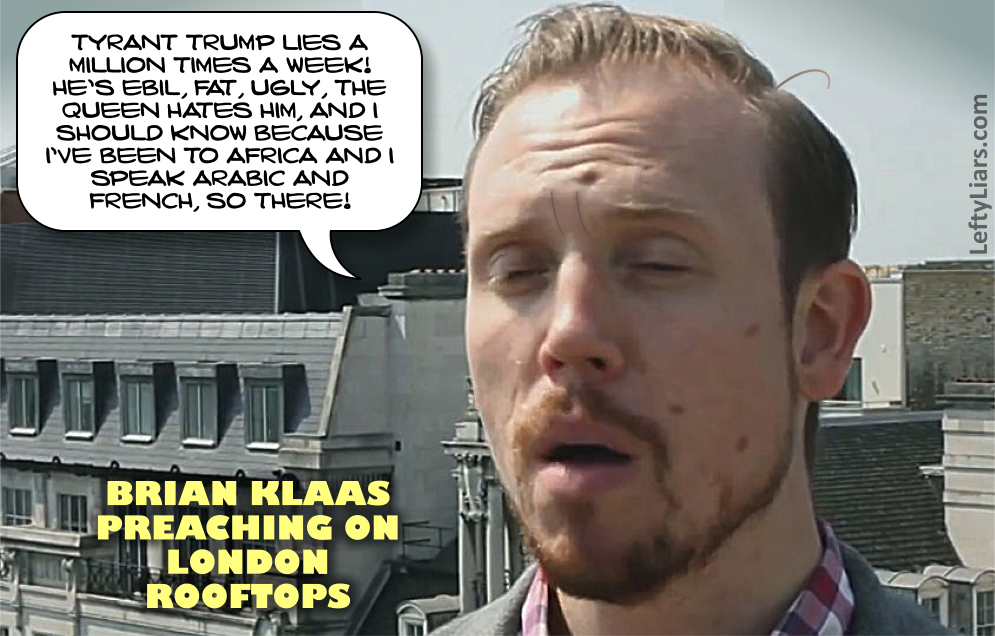 Brian Klaas slanders Donald Trump endlessly on Twitter. He is a London troll – an ugly version of Rupert Grint playing a heroin addict with scurvy and dermatitis. He also writes for The Washington Post, re-hashing lies fabricated by Fake News ad nauseam. Klaas poses like a schoolboy saving us from a deadly dragon. It becomes clear he thinks of himself this way; as a hero saving the world.

We see the same pouting, self-assured confidence in other young punks, from Nazi Youth to teenage Islamic extremists, and their titanium obstinance seals them off from any reason. Common-sense cannot get a foothold on their shiny, tight brains.

Garden variety grubs can be found under rocks, behind bark, and under leaf litter. Where do these anti-Trump grubs come from? Most start off in the carcasses of universities and schools. Here is Klaas as a liberal college kid 11 years ago (2008), bragging about his ability to speak Arabic, French, and English. Sorry about the quality – the vid was left on my back seat in the sun. My dog slept on it a few times and may have chewed it up a little.

Klaas studied political science in London and lives there today. These days most of us conservatives translate ‘Political Science’ as ‘Fake News.’ Once Klaas finished his Fake News courses he began to teach Fake News himself at University College London. He appears regularly on Fake News channels like MSNBC, CNBC, BBC, CNN, and writes for Fake News like The Washington Post. He is a very busy Trump basher.

Being such a prolific repeater of false information Lefty publishers were quick to print Klaas, whose books are clichéd Trump bashing exercises suitable for university morons. One is called ‘The Despot’s Accomplice’ and starts off by saying that Trump is not a despot, and then spends most of its pages trying to paint him as a despot. Part II is ‘Donald Trump’s Attack on Democracy,’ another droll collection of halfwitted nothingburgers. 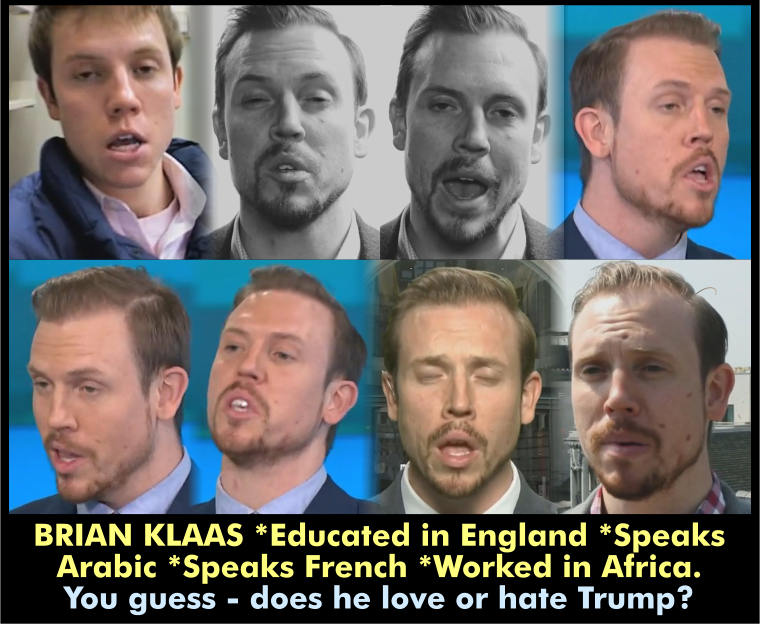 Looking at his book, you can see how he slyly misdirects:

Trump repeatedly said during the campaign that the United States should bring back torture because “it works,” politicians, journalists, activists, ordinary citizens, and even the military pushed back. He has dropped it—for now.

Klaas made a Gish Gallop of deliberate falsifications in that short paragraph.

1)  Donald Trump was campaigning. Every topic was repeated many times, as they always are by any politician when electioneering. Klaas tries to infer that this was a vital point Trump was making since he “repeatedly said” it. In fact, it was an off-the-cuff comment made at several campaign events when asked about, and Trump made it clear it was up to others to instigate. He said he would happily go with their decision, so it was plainly not a “vital” issue for him.

2)  The subject was ‘waterboarding,’ which many argue is not real torture. Certainly if given a choice between waterboarding or having his testicles cut off, wee Klaas would pick the former. Journalists have sampled waterboarding to see how bad it is. How many would have their fingernails pulled out with pliers to know more about that? There is a difference between real torture and something liberals call torture.

3)  Torture (and waterboarding) do work. If they did not provide useful results, the enemy would not use them. Experts in both happily detail the results. Yes, going too far is not productive – nobody said it was. The idea is not to go too far, but to use just the right amount; as is the case with most things. Saving thousands by waterboarding one terrorist murderer is well worth the effort. Only liberal snowflakes would oppose that.

4) Obviously, all kinds of people ‘push back’ against anything Trump suggests, regardless of its worth. It is called the Democratic Party Machine, and it includes politicians, journalists, activists, ordinary citizens, and even some military people. Telling us they push back is like saying the bubonic plague kills people.

5)  Trump has dropped nothing of the sort. He has precisely the same views about waterboarding he always had.

In an interview with David Muir Trump made his views clear. Obviously, Klaas missed this. Catch up Klaas:

David Muir:  Mr. President, you told me during one of the debates that you would bring back waterboarding and a hell of a lot worse, in your words.

David Muir:  What does that mean?

Trump:  When they’re shooting, when they’re chopping off the heads of our people and other people; when they are chopping off the heads of people because they happen to be a Christian in the Middle East; when ISIS is doing things that nobody has ever heard of since medieval times, would I feel strongly about waterboarding? As far as I’m concerned, we have to fight fire with fire.
Now, with that being said, I’m going with General Mattis. I’m going with my secretary because I think Pompeo is going to be phenomenal. I’m going to go with what they say. But I have spoken, as recently as 24 hours ago, with people at the highest level of intelligence, and I asked them the question. Does it work? Does torture work? And the answer was: Yes, absolutely.

David Muir:  You’re now the president. Do you want waterboarding?

Trump:  I don’t want people to chop off the citizens’ or anybody’s heads in the Middle East, okay, because they’re Christian or Muslim or anything else. I don’t want — look, you are old enough to have seen a time that was much different. You never saw heads chopped off until a few years ago. Now they chop them off, and they put them on camera, and they send them all over the world.
So we have that. And we’re not allowed to do anything. We’re not playing on an even field. I will say this.
I will rely on Pompeo and Mattis and my group. And if they don’t want to do – that’s fine. If they do want to do, then I will work toward that end. I want to do everything within the bounds of what you’re allowed to do legally. But do I feel it works? Absolutely, I feel it works.

David Muir:  So you’d be okay with that as president?

Trump:  I want to keep — no, I want to — no, I will rely on General Mattis, and I am going to rely on those two people and others, and if they don’t want to do it, it’s 100 percent OK with me. Do I think it works? Absolutely. 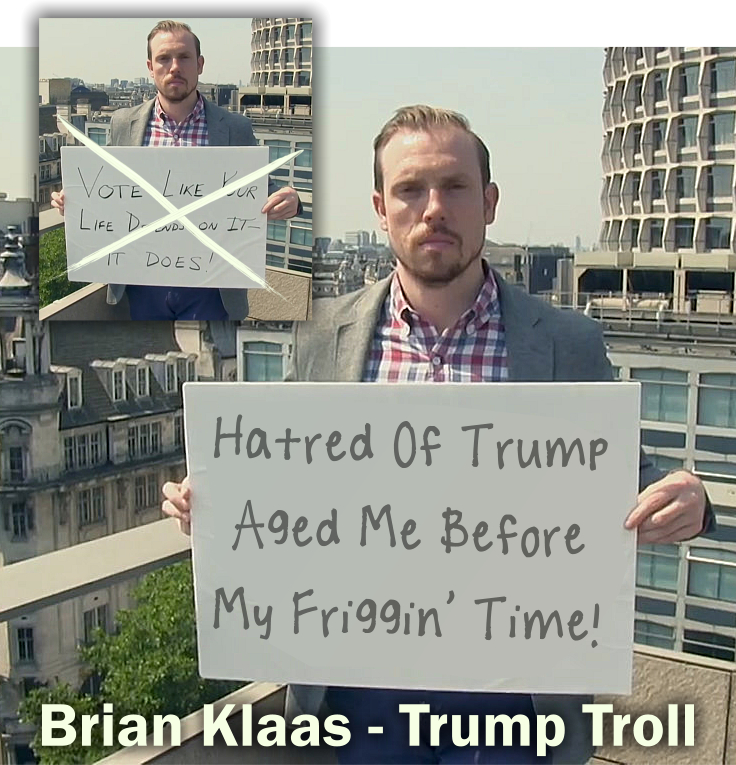 Klaas’ tweets are no better. Here he is Dec 26, 2016, whining about how Trump will regret his prediction that the stock market will go up.

This tweet is going to come back and haunt Trump after the first bad news cycle of his presidency. (Jan 20/21?) https://t.co/178UqEfRTF

Could a man be more wrong than hapless Brian Klaas was that day? He’ll probably delete the tweet now, so here is a screenshot. Today it haunts poor Klaas. Here he is again, making a Klaas out of himself:

After Trump attempted to punish Brennan for political reasons—something that happens in authoritarian regimes, not democracies—Brennan pens a damning op-ed, which (again) destroys Trump’s false claim that there was “no collusion.” There was a conspiracy. https://t.co/URcOfxZluW

As usual, he digests and regurgitates Fake News, making all the typical mistakes and telling all the usual lies. Let’s go through some:

Lie number one. By any definition or rational judgment, he would almost certainly not be in jail.

Klaas:  That’s the view of a bipartisan group of hundreds of former federal prosecutors, who have signed an open letter stating that Trump’s conduct would warrant criminal obstruction of justice charges if he lived anywhere except in the White House.

For this sleight of hand, Klaas linked to another Fake News merchant, Matt Zapotosky.

Matt says: “ More than 450 former federal prosecutors who worked in Republican and Democratic administrations have signed on to a statement asserting special counsel Robert S. Mueller III’s findings would have produced obstruction charges against President Trump — if not for the office he holds.”

Right away more lies become evident. If such prosecutors knew of any chargeable offense committed by Trump the details of such a crime would be all over the news. Brian Klaas and Matt Zapotosky would be caterwauling about that crime instead of spamming people for irrelevant feedback. There are hundreds of thousands of federal prosecutors who worked in administrations going back decades. Spam a mailing list with a million such people, and you will generate a few hundred clicks. Ask the opposite question; ‘Would no such thing happen?’ Fifty thousand would agree. They do not publish that. Let’s leave Matt Zapotosky to his one-sided spamming and return to Brian Klaas.

Klaas:  And yet, somehow, the accepted wisdom is that beginning impeachment hearings is not worth the risk.

Weasels like you and Matt Zapotosky will have to do more than spam a few hundred Democrats to get an impeachment, Klaas. For a start, you will need a crime, and after nearly two years of hard work, Mueller found no wrongdoing. Where will you and Matt dig it up?

Klaas:  If he wins reelection without even enduring so much as an impeachment hearing, then that will encourage future presidents to commit corrupt or criminal acts.

You have failed to name a corrupt or criminal act committed by President Trump, and this behavior is similar to what mentally disturbed people do. Perhaps you should wear a white hospital gown and a pair of slippers so you can slide around on polished linoleum floors mumbling about President Trump’s crimes. “He is a criminal, yes sir, oh, he certainly is; indeed, he is, he committed many crimes, many, many, many of them, oh yes…”
When a nurse asks you for details, your smile will vanish. You will slink away to repeat your chanting elsewhere. “So many crimes, oh yes, so many…”

Klaas:  After all, Trump will have gotten away with it “Scott Free.”

“Hey Klaas,” the nurse called out.
Klaas turned his head. “Yes?”
“Guess what?” the nurse laughed. “Trump tweeted ‘Scott-free’ with two Ts instead of ‘Scot-free’ with one!”
Klaas’ eyes widened in excitement. “He did?”
“Yes,” the nurse replied. “I saw it on CNN.”
“He’s a criminal you know,” Klaas offered, but the nurse’s face soured. She turned and walked away, muttering, “Friggen broken record…”
“It proves he’s a criminal,” Klaas called after her. “He’s committed many crimes, you know.”

Klaas:  And yet, Trump has almost certainly committed serious crimes without any consequences.

The link was to another Washington Post propagandist, Max Boot, whose poorly written article undoes itself in its own headline: “Here are five felonies Trump committed — if Cohen is telling the truth.”

This is the standard they use to judge, sentence, and execute Trump, so they must be guilty too.

Broken Klaas, Front Door Matt, and Dirty Boot – you guys are not journalists or writers. You are propaganda thugs, no better than low ranking junior KGB grunts. Know your place in the scheme of things.