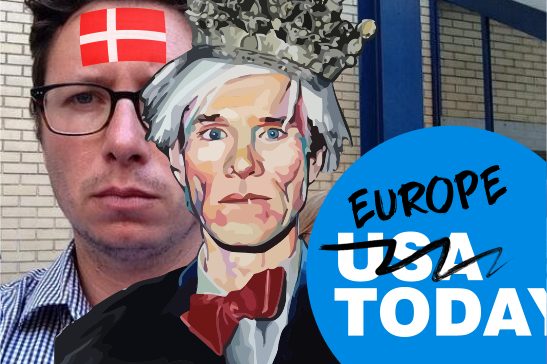 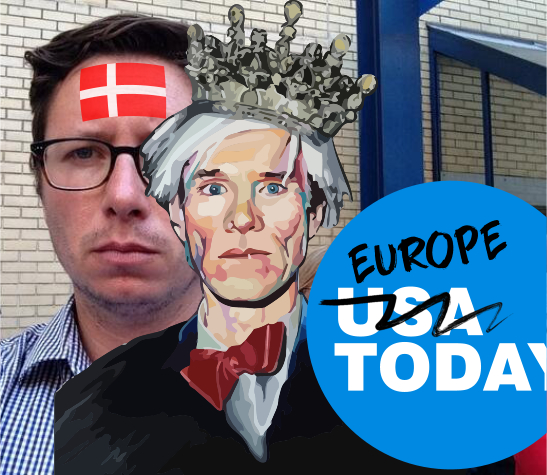 There is not much biographical information about Kim Hjelmgaard online, except that he is based in Berlin or England, and writes for USA Today. He has traveled to Serbia, Croatia, Macedonia, Greece, Russia, and many other places in Europe. He took this photo of prisoners in Russia:

The surname Hjelmgaard is most commonly found in Denmark. He tweeted this photo of himself hugging a snowman/Danish flag, and wrote, “Hugging the fatherland,” so I assume he is Danish. 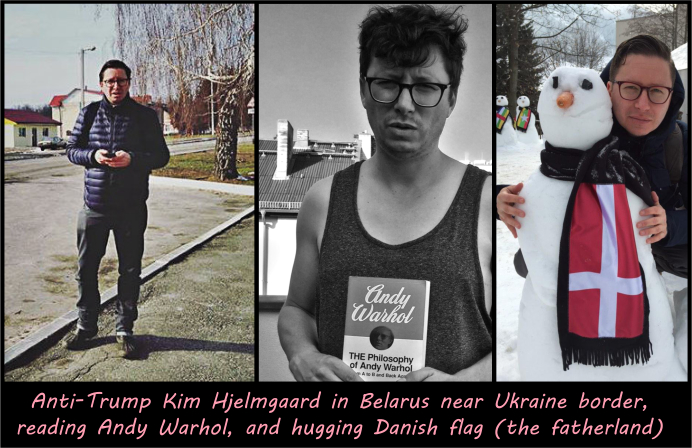 Denmark is a very left-winged nation, so this would explain his dislike of Trump. I have come across many young Danes online. They are tenaciously left-winged and hate Trump with a passion. In discussion boards they like to hurl every insult at him they can find. I assume Kim Hjelmgaard is the same, judging by his anti-Trump tweets and articles.

He is a fan of Andy Warhol, a famous, gay, left-winged artist, whose parents, Ondrej Warhola and Julia (née Zavacká), emigrated to Pittsburgh from Slovakia. Warhola, who became Warhol, was part of the counter-culture and relied on diet pills. He is also rumored to have used cocaine, as most hippy celebrities did in the ’60s. He may have been high when he came up with the following gimpy observation:

What’s great about this country is that America started the tradition where the richest consumers buy essentially the same things as the poorest. You can be watching TV and see Coca-Cola, and you know that the President drinks Coca-Cola, Liz Taylor drinks Coca-Cola, and just think, you can drink Coca-Cola, too. A Coke is a Coke and no amount of money can get you a better Coke than the one the bum on the corner is drinking. All the Cokes are the same and all the Cokes are good. Liz Taylor knows it, the President knows it, the bum knows it, and you know it.

There are a few errors there, but the biggest mistake is in thinking it is new for the wealthiest consumers to have the same things as the poorest. How about sand, water, air, milk, glass, and rope? Then there are dogs, rabbits, cats, mice, canaries, grass, bricks, pails, nails, toothbrushes, scissors, pencils, and thousands of other items, tools, objects, animals, and plants Warhol forgot about.

Hello. I’m a London-based foreign correspondent for USA TODAY. I have worked for USA TODAY for five years and recently returned to London after two years in Berlin. I report on a broad range of foreign affairs-related topics, with an emphasis on making comparisons to U.S. policy and experience. In Europe, I have covered refugee crises, immigration, terrorism, the lingering impact of disasters, Russia-related topics, the conflict in Ukraine and, above all, the extraordinary stories and experiences of ordinary people. It took me almost two years to get a visa to Iran.

So it appears our Danish reporter is everywhere but the United States, yet he writes for USA Today.

This clipping is from an article Kim Hjelmgaard wrote in 2009 from Denmark, so it becomes clear he is not an American.

Skip to the present and look at the simpleminded USA Today article he wrote, just yesterday. He lists all the connections that Donald Trump the businessman had with Russia going back over the last 30 years, from building projects to beauty pageants, and then, with great pride, chronicles all the times President Trump stated that he had no dealings with Russia, as though he is the Danish Sherlock Holmes!

Here are a few examples:

– “I have no dealings with Russia. I have no deals that could happen in Russia, because we’ve stayed away,” Trump told reporters in February last year.

Newsflash for Kim Hjelmgaard, and his comrades at USA Today:

When President Trump said, “I have no dealings with Russia. I have no deals that could happen in Russia,” he was using what we call ‘present tense’. Here is the definition:

“We had no collusion with Russia, and during the time you say we colluded with Russia we never dealt with Russia in any way.”

Mischievous reporters are always changing the grammar of Trump’s quotes to make them look fishy, but it’s Fake News that stinks of fish, not the Don. Anglo Saxons understand Trump’s version. Danish people may have problems. Kim Hjelmgaard cannot grasp the subtler nuances of the English language Trump speaks.

Then again, the Dane is not the sharpest knife in the draw, to begin with. Have a peek at what he wrote on this page. Our Danish Warhol lover adds up how many women, murdered globally, are killed by intimate companions or relations (58% according to his UN figures) and implies they would be safer if they were not with their families. Hjelmgaard forgot two critical details:

1)    The vast majority of women are not murdered by anyone.

2)    Murder rates would rise significantly if all women were removed from their families.

Wouldn’t it be nice to read some sensible news for once, written by good old fashioned, smart reporters? In papers that really did represent the USA today?