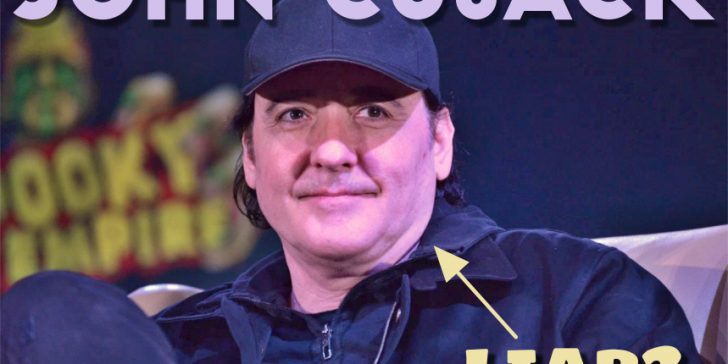 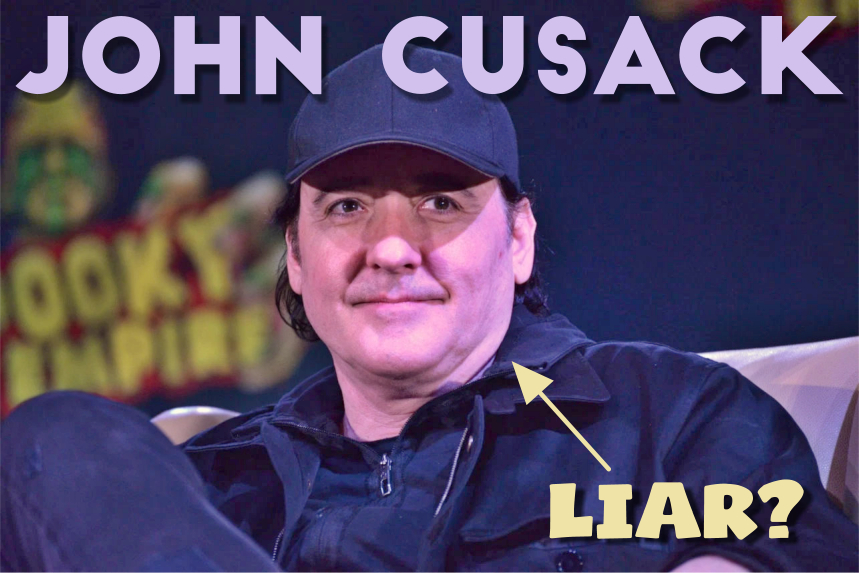 In great news for the world, a recent French study (backup here) on Hydroxychloroquine as a treatment of COVID-19 showed it deleted viral load in COVID-19 patients, especially when reinforced by azithromycin. The results were very encouraging and highly successful.

During a Coronavirus Task Force briefing at the White House Friday, (see video here) a question about the anti-malarial drug chloroquine came up. During the press conference, John Roberts, from Fox News, asked Dr. Anthony Fauci whether there was evidence that Hydroxychloroquine could be used as a potential therapy for those with Coronavirus. Dr. Fauci dryly said no, maintaining that the only evidence was anecdotal.

To counter Fauci’s negative reply, Trump said he was more of a fan of Hydroxychloroquine, but agreed that the doctor was a hundred percent correct. He shrugged and said, “We’ll see.”

Peter Alexander, from NBC News, then asked, “Is it possible, is it possible, is it possible that your impulse to put a positive spin on things may be giving Americans a false sense of hope…”
“No, I don’t think so,” Trump replied.
“…about our level of preparedness right now?”
“No, I don’t think so,” Trump continued. “I think that… I think it’s got…”
Alexander talked over Trump, saying, “…the not yet approved drug…”
Trump said, “Such a lovely question. Look, it may work, and it may not work, and I agree with the doctor in what he said – may work, may not work. Uh, I feel good about it. That’s all it is; just a feeling, y’ know, smart guy. I feel good about it, and we’re gonna see – you’re gonna see soon enough. And we have certainly some very big samples of people; if you look at the people, you have a lot of people that are in big trouble. And this is not a drug that, obviously, I think I can speak from a lot of experience because it’s been out there for over twenty years, so it’s not a drug that you have a huge amount of danger with. It’s not like a brand new drug that’s been just created that may have an unbelievable, monumental effect, like kill you. Uh, we’re gonna know very soon, and I can tell you the FDA is working very hard to get it out. Right now, in terms of malaria, if you want it, you can have a prescription. You get a prescription. And by the way, and it’s very effective, it works. Uh, I have a feeling you may, and I’m not being overly optimistic or pessimistic, I sure as hell think we oughta give it a try. I mean there’s been some interesting things happened, and some good, some very good things. Uh, let’s see what happens – we have nothing to lose – y’ know the expression? What the hell do you have to lose? Okay?”

“I say that you are a terrible reporter, that’s what I say,” President Trump replied. “I think it’s a very nasty question, and I think it is a very bad signal that you’re putting out to the American people. The American people are looking for answers, and they’re looking for hope. And you’re doing sensationalism and the same with NBC and Concast (I don’t call it Comcast, I call it Concast), for whom you work. Let me just tell you something; that’s really bad reporting. And you ought to get back to reporting instead of sensationalism. Let’s see if it works. It might, and it might not. I happen to feel good about it, but who knows? I’ve been right a lot. Let’s see what happens. You ought to be ashamed of yourself.”

Q: What do you say to Americans who are scared

TRUMP: “I say that you’re a terrible reporter, that’s what I say.”

To present the dialogue like this was deceiving because it lacked context, thus creating a deliberate false dichotomy. A person reading the tweet would think Trump was saying that only a terrible reporter would show concern for scared Americans during a pandemic. It is a simple schoolboy trick that Fake News harness commonly – remove the context to change the perception.

In the following example, an attorney uses the technique on a bank manager witness, in court:

Bank manager: The robber wore a pink mask and approached me with his gun. He hit me across the face, and I fell to the floor. He yelled at me to give him the safe combination, or he would shoot. I was terrified and repulsed by him. He kicked me in the ribs, so I gave him the combination.

Attorney: So, to summarize, you find men who wear pink repulsive. Are you a homophobe?

School bullies would use the technique as follows:

12-year-old ‘Big Sammy’ punched 10-year-old Clark and stole his lunch, growling, “Remember, if you tell anyone, I’ll beat you up after school.”
Clark ran away, yelling, “Fat pig! I’m telling!”
Later, the school’s roly-poly headmaster called for Sammy. “You’ve heard the charges, Sammy,” he drawled. “What have you to say for yourself?”
“Sir,” Sammy mewled, “it was his fault, not mine.”
“Oh? How so?” the headmaster asked.
“He called me a fat pig, sir.”
“Is that true?” the potbellied principal asked.
“Well, er…” Clark began, turning red.
“So, you judge people by their weight?”
“No s-sir,” Clark stammered.
“I should think not!” the headmaster shouted, which started a coughing fit. He gasped, “Get out, the both of you, and next time Clark, think twice before you call people names!”
“But…” Clark began.
“OUT!” the fat man wheezed.
Outside in the corridor, Sammy whispered, “I’ll see you after school, you anorexic streak of piss.”

Sammy was able to defeat Clark by presenting an out-of-context fact as though it came first. Yes, Clark had called him a fat pig, but only after Sammy punched the younger boy, stole his lunch, and threatened to beat him up if he talked. By taking it out of context, Sammy convinced the headmaster that Clark had caused the fight by calling Sammy a fat pig. Although Sammy stated a fact, his lie was in deliberately placing it out of context to deceive.

Likewise, mischievous John Cusack took one tiny part of the journalist’s question, and one small piece of Trump’s reply, combining them to suggest a different scenario. If he were to instruct someone to do this in a note, it would look something like this: 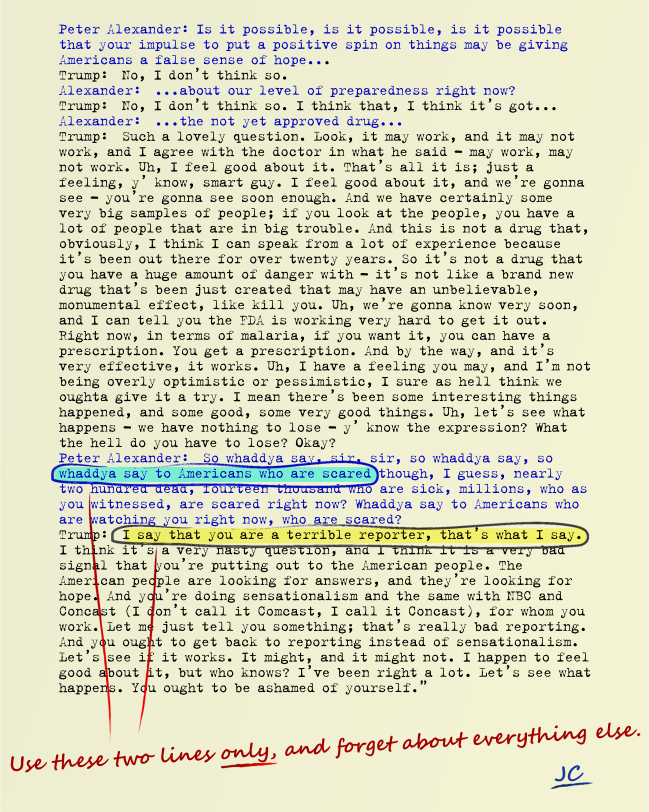 John Cusack added the goofy comment, “Rot in hell – mr president,” as though his summary was excellent and correct.

So who is this knucklehead, anyway?

Cusack, a 53-year-old actor, was born into a small-town Illinois Catholic family. His father was an actor, his mother, an activist teacher. After enrolling at New York University, he dropped out after a year to go into acting. A fervent anti-war nut, Cusack was happy to make movies like Grosse Pointe Blank (1997), playing an assassin who kills dozens of people, for money. How many murderers today list that film as their inspiration to get a gun and shoot someone? Perhaps if Cusack had not dropped out of university, he might see how hypocritical that was. For an anti-war nut to play the role of a prolific paid killer, is like a priest making a pedophile porn movie. Today Cusack appears to be swelling up like a walrus with bloat, and that is not a happy place to be for any Hollywood star. He takes his rage out on President Trump, but there is a problem. Like most Hollyweird actors, he understands very little about politics or economics.

Funny how the permavictim who wrote this shit is trying to suggest that these totally fine questions are too mean for trump and it’s not right to ask questions that might huwt his feewings.

Taking the last part of your argument first, u/sh1nes, I am all for Trump giving press conferences and putting Fake News in their place. It is one of his most endearing qualities and makes excellent viewing. Me, a permavictim? If that is your claim, you would need to elaborate and provide evidence, something Lefties are notorious for leaving out. As for the ‘totally fine’ questions, they are not, since we are dealing with a pandemic. In the years and months before WWII, Lefties called Winston Churchill a ‘warmonger’ for pointing out Hitler’s amassment of troops, planes, tanks, ships, and submarines.  NBC’s Peter Alexander is no different from those Benedict Arnolds. Finally, the article was not primarily about the apparatchik Peter Alexander, but one of the Left’s Hollywood witchy cauldron stirrers, John Cusack, and the way he lied about Trump’s dialogue with Alexander. Your response was thus a diversion.