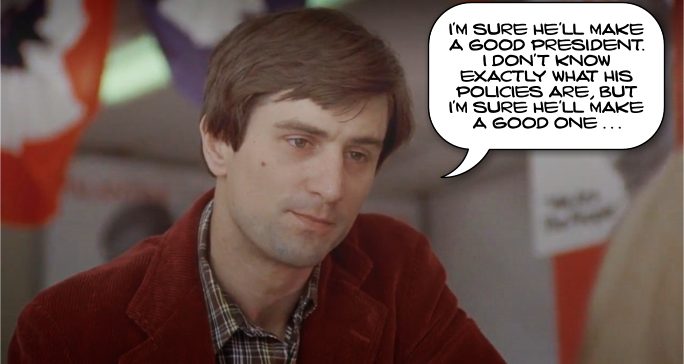 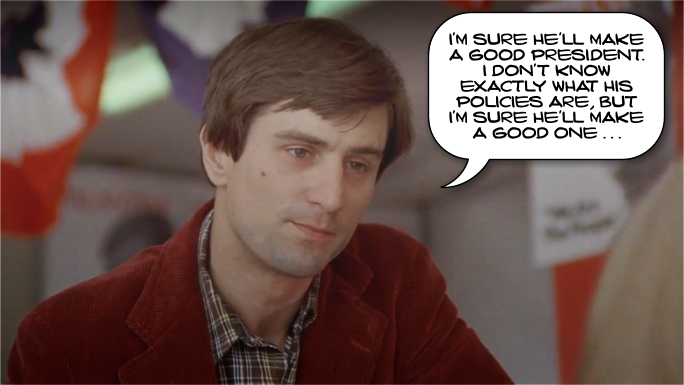 People say he is similar to Travis Bickle, his character in Martin Scorsese’s 1976 hit, Taxi Driver. Robert De Niro, who President Trump calls ‘Punchy,’ was interviewed by far-left CNN commentator Hala Basha-Gorani two days ago. When she asked the New York actor why he was so outspoken about the Donald, ‘Punchy’ said:

It’s, I, I just, you know, I know what kina person this guy is. He’s a New Yorker who I neva would wanna meet. Neva wanna meedim, and now he’s President. And the reason I woodenwannameedim is becuz’v the kinaperson he is. Ahh, as we all know now, it’s not, there’s nuthin new. Um, um, it’s just-ah, it’s disgraceful, but we’ll get past it. It’ll be one of those things it’ll be like a nightmare that you remember, I’ll be with my trainer, we’ll be five years from now, sayin’ remember all that stuff how terrible it was and at least I, I lived to see the, the time when this will all pass, like any nightmare.

Observe his reply when Basha-Gorani asks him what he thought about Brexit:

Well I, you know, I, I’m… I don’t know fully what Brexit is, but I have a sense of what it is and what I’ve been told, and what I’ve read and so on, and people are dissatisfied with certain things. The working people; the people who are getting, ah, not benefiting from, erm, like the rich in this country who, who would, Trump with his tax breaks and so on, it all boils down to giving the ta– the rich a break, and I think that happens in the working people on both sides right and left are concerned and angry, and uh, they have to be, they have to be um, fff, er, um, part of the equation of, of, making things right, I mean it’s easier said than done, but it has to be. Ah, and I think that’s what it is, but I, I hope they have a referendum in, er, in England, er, I, that’s my feeling because maybe they’ll change that, and maybe that’ll be better, I don’t know all the things, so, I, I, I, I’m not really, qualified to speak.

It is clear De Niro has no idea what Brexit is, and that reveals a lack of awareness of politics in general, which forces us to ask, why is he so angry at Trump? It cannot be politics since he understands very little about it. This is why he never provides any political ideas of his own or criticizes any of Trump’s. This response is almost exactly what you would expect from Travis Bickle, the character De Niro played in Taxi Driver.

Did you notice the eerie similarity in regards to politics? If the anger is not coming from there, where does it come from? Perhaps if we look at the essential differences between the two New Yorkers, we could find a clue. I will leave out the ten-inch height difference because height has no bearing on one’s political awareness, though for all I know De Niro may have a problem with that.

1)  Trump is President of the United States.

2)  Trump had a better education.

3)  Trump has a lifetime’s experience in Business.

4)  Trump understands much more about politics.

5)  Trump is a billionaire.

6)  Trump’s wife was a beautiful, smart and loyal model, still married to him.

7)  Trump’s daughter is gorgeous, intelligent and loyal, and works for him.

8)  Trump’s other children are smart, loyal and work for him.

9)  Trump fills arenas wherever he talks.

De Niro dropped out of high school to study acting. He drove a taxi for a while. Last month he split from his African-American partner, Grace Hightower. According to Wikipedia De Niro met her while she was working at a Chinese restaurant. De Niro’s children include 51-year-old Drena, an adopted daughter, who lives in New York with her son. He has several other children, including an autistic son. His father was a gay abstract painter who enjoyed little success. Is it possible De Niro’s problem comes down to pure jealousy; the green-eyed monster?

Well-balanced people are happy to see success in others. They like to observe people win because it means they can do the same. On the other hand, we all know people who cannot stand seeing success in others. This problem usually has a source, and Freud would say that source is often a parent. From what I have seen of De Niro Sr.’s paintings, I think he was in the wrong line of work.

Robert De Niro Sr. was a gay abstract artist who struggled for recognition. According to Jerry Portwood, Robert De Niro Jr. “shakes and sobs as he talks about his late father, who lived openly as a gay man.” Portwood said [emphasis mine]:

He shares intimate stories of his father’s despair about his sexual orientation and his stagnant artistic reputation. At one point, as De Niro was ascending to Hollywood’s top tier, he made a last-ditch effort to rescue his father, who was sick in Paris, where he’d been living as a starving artist. It’s clear that De Niro regrets that he wasn’t able to help him more before he died…

How did his father treat him as a child? Did he fly into jealous fits of rage when seeing other artists do well? Did he hate wealthy businessmen? Did he hate America? If so you would have to ask if the younger De Niro’s wealth and success caused conflict between them. Did he feel guilty? Would such a person’s outbursts be their inner father assaulting us with his poutrage?

Since he was a young man De Niro enjoyed wealth and success. To a limo liberal like him America was great after eight years of Obama’s treachery and sabotage. I doubt he noticed the decline in culture, science, education, industry, employment, the military, defense, border security, law and order, health, infrastructure, energy, marriage and freedom of speech, so naturally he thought Donald Trump’s motto ‘Make America Great Again’ was stupid.

My advice to De Niro is to forget about your father’s philosophies. He was wrong, which is why he was starving in Paris. Your ancestors came to America in the first place to get away from Europe. If your father was so smart why did he go back there to suffer? Stop taking out your rage on Trump, the one man who can save America. Find a socialist to blast – they are the ones causing all the trouble. Then again, since your knowledge of politics is on par with your dad’s painting, you need instruction. Start with Milton Friedman and Ayn Rand.